balance to the worldView game page

your job is to make balance in the world by killing angel's or devil's.
Submitted by JosiCraft — 2 days, 2 hours before the deadline
Add to collection 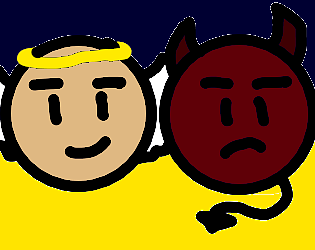 balance to the world's itch.io page

An original idea with a lot of possibilities. Here is my review

The music was rather quiet. I wasnt originally going to put that seeing as it was a royalty free track so there is a chance that track is naturally quiet however i felt i needed to put that point there since the sound effects were too loud next to each other. Having turned up the volume to hear the music lead to a bit of a shock when the sound effect played and nearly split my eardrums.

Art wise i liked the direction for the art however i feel that the grey behind the characters felt a little bland compared to the characters in front however this could just be artistic preference. I did however feel that the characters could have had more variety than just the hair being a different colour however again its a minor nitpick. A final point to note is in the tutorial area, the text overlaps the highscore leaderboard and also has a fair number of spelling mistakes. The very same sentence is hard to read since its mostly obstructed by the various other text from the leaderboard.

The theme was executed rather well in interesting idea and spin on the idea of perfect balance however the gameplay lets it down.

Up until this point these were all minor nit picks that did affect their respective roles depending on how big the nitpicks were compared to the redeeming qualities however with the gameplay, sadly the issues i had were quite bigger.

Aiming for the characters felt way too difficult and strict where you would think your close enough only to find that it still didnt count and when you do hit them, a lot of the time it doesnt work and they still live. This could be improved by having a radius or a minor auto aim to help guide the cursor on top of the enemies when close enough.

The other big issue was the balance not having any UI to tell you where the imbalance is coming from. It does a good job telling you when their is balance but when their isnt the game expects you to instantly know why which is ok when its really obvious such as 3 demons and 1 angel however it borders impossible when theirs say 13 angels and 14 demons, especially in the small time frame you are given to fix the balance before they all fly across the screen at a speed near impossible to catch meanwhile your health is still ticking away at a rate far too fast and not regenerating fast enough to compensate.

Overall, This was a good concept but not such a good execution. It is however, also of note that for what the game is, it makes for an interesting idea and a good attempt at making a game in only 3 days or less. If the above issues were solved, i can imagine this being a fun game to play. I recommend updating the game fixing those issues so you can keep it in a portfolio or learn from the games shortcomings for the next game. You did good and i hope that my critic of your work will help you on your path to being an even more experienced developer in the future and if you decided to, making this game even better! I wish you luck with the rest of the jam and your future as a developer.

thanks and yes I am considering making progress on the game so I appreciate all your feedback :)

You are welcome! Every game has its faults but knowing them is how we as devs improve :)

Speaking of, i was also wondering if while you are here, you could try out my submission and rate it and review it for me? I would mean a lot to me if you did! I would love to hear your thoughts on the game.

Nice little game, surely was a bit stressful trying to keep track of the number of devils and angels on the screen. Like an other user stated, it was confusing when the a group of them left the page as it got in the way of counting how many there are on the screen currently. Nice attempt and a good take on the theme. Well done :)

I like the idea behind this game. The gmaeplay is solid and I like that it makes me think about my actions. I did spot a few problems.. your leaderboard goes over the info text with the <nobody> tags and I found it hard to figure out which devils & angels were the ones currently been counted as when a group left the page they got in the way of the new entries. But other than that a solid entry xD

can you please add mac support if possible?

macOS export doesn't work, it's just an exe in a zip ):

ok I see what I can do

sorry but i can’t