A Night With A Bat Girl (VN about a bat girl) 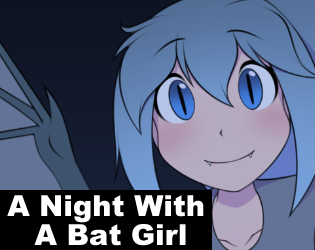 Took a few months, but I just released my new choice heavy visual novel! There are a LOT of endings, so no route is very long, but I tried to pack the game with as many branching paths as I could.

For those of you who are interested, this is how I graphed the choices and related scenes in the game:

I also made a decision to not use character sprites in this game, so every scene is a brand new CG asset, which means that there are roughly 150+ art assets that I had to create for this game. I also wrote the music and script of the game and designed the gallery menu, all of which were a lot of work. It's good to see everything finally pieced together, though.

If anyone gives the game a try, let me know your thoughts! There's a free browser version but it doesn't have all the features of the full version, which I've priced at $5. You can also buy my art pack + soundtrack for $10, of course!

Up next, I'm going to be working on a sequel to my furry game, Date a Mink.