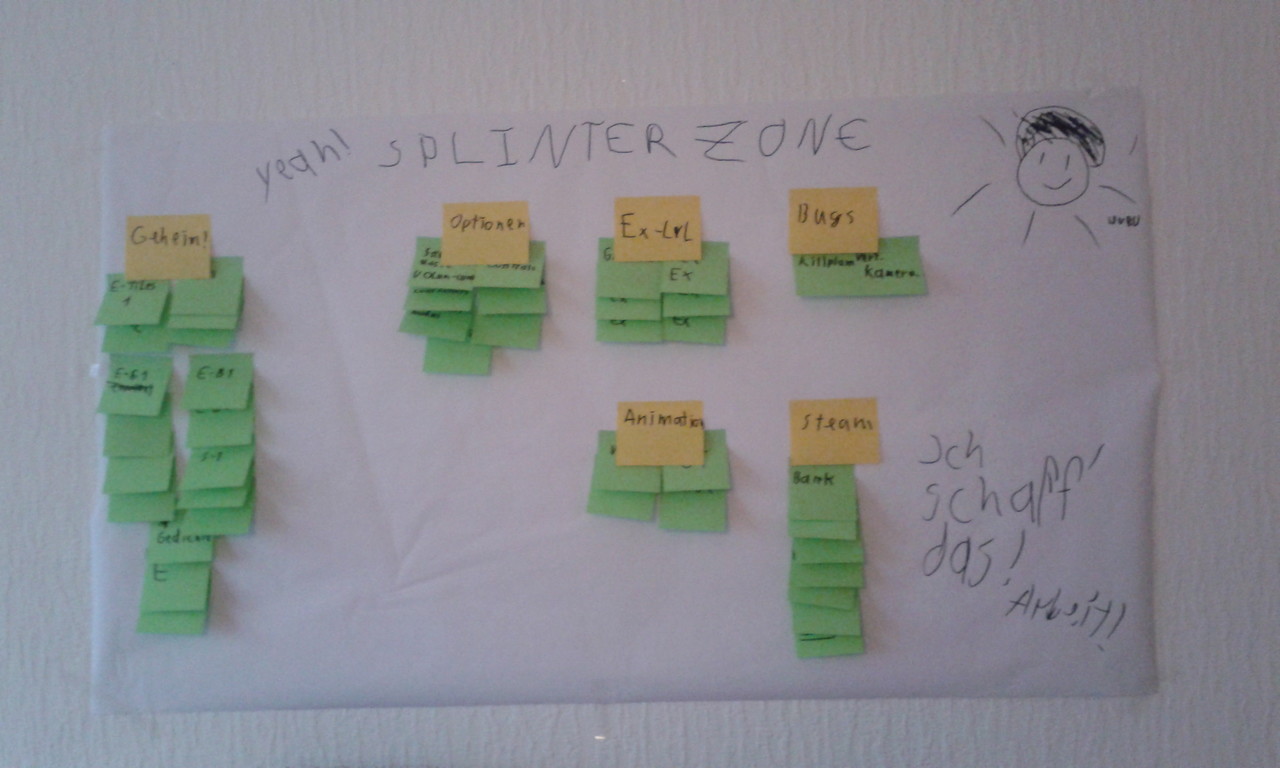 I have a "workwall" in my bedroom/office that I use to keep an overview on what still needs to be done. I used it to push the game into beta and I'll use the same approach to get the game ready for its release.

Essentially each note consists of one task and I'll try to remove one of them per day. Oftentimes this doesn't completely work out, because some tasks take more time than others, but it keeps me from doing whatever comes into my mind.

I can't give an estimate, but you can roughly say that once this wall is empty, the game is reaaaaallllyyy close to being done.

I'm going to update this thread from time to time, to show you my progress.

It's almost two weeks now since I posted the last picture, so here's a quick update.

I have now finished most of the spritework that was still left. I'll spend some more time today on setting up my Steam-Account stuff (the stuff in the lower right corner).

Tomorrow I'll work on Saturday's update. It's probably going to be more difficulty balancing, a new animation (that's already done) and maybe something else, if I have the time.

Thought it might be time for another update. This empty space on the left is where all the content was listed, that was still missing from the game. It's not completely in there yet, but I should have everything ready until Friday. After that I'll take care of the main menu (which is the next big thing that's still bothering me) and then I'm going to polish this game up as much as I can. At some point I also need to start working on the Steam implementation, but I'm still in the process of getting access to Steam and need to wait until Valve gets back to me.

My main concern right now is to sort everything out that can still severly hamper people's enjoyment/access to the game, after that I'll see what needs improvement/polish and I will probably repopulate the wall a little bit, to avoid getting overwhelmed with stuff.

Still can't say when the game will be out, but it's my goal to release it before my Birthday.

Haven't posted an update in a while. I re-populated the wall a bit last weekend, but already managed to remove about four entries in the meantime.

The biggest thing left is the score system and the Steam implementation. The former I can probably hack together within the next few days, the latter may take a while.

Looks I won't keep me "release it before my birthday" goal, but I think I can least manage to have it "complete" (everything done aside from Steam implementation and polish) until then. I'm still fairly optimistic that I can release the game in April, because there isn't really all that much left to do.

In terms of how long this game will stay in Early Access? I don't know. I would say expect at least two more updates. One the coming weekend and another one the week afterwards. You should also expect to hear something more concrete about the Steam version after that. In case you're wondering what the hell is going on, this is how the workwall looks like now.

You can see that I'm pretty much in the home strecht, you can even see a date when I intend to be done with everything.

To be honest, most of the tasks that I've listed here are things that take only a few minutes to fix, so even though I don't want to get anyone's hopes up, it looks like I might be done with this game even earlier than that.

However that does not mean, that the full release is imminent, there's still a lot of work left for me to do, before I can make that happen. It does however help me in making sure that the game will come out within May, which is good.

Anyway, it feels really good to make some steady progress again and also being able to fix a bunch of lignering issues the game still has.

I don't know, if I'll do another update here before the full version comes out. To be honest, I kind of don't want to get additional feedback at this point, because it would likely throw my plans out of order. I'd much rather try and wrap this thing up and see what I can fix after it's out properly.

The wall won't be empty for long, but it still feels really good to have cleared every single task.

The game still needs a few more sound effects and I also need to take care some more technical stuff, but I should be able to start working on the Steam version next week. I also received a first sketch for the store art, and it seems really likely that I can release the final version by mid/end May.

Updated the workwall to reflect my new reality a bit better. I'll still continue working on Splinter Zone (I have at least two larger updates in mind), but I'll try and shift my priorities over towards other projects.

Of course this doesn't mean that Splinter Zone will be abandoned or anything. I just need to organize my stuff that I can keep moving forward.