Donsol is a solitary card game in which you must go through the deck in sequences of 4 cards. · By

I just download the new WIN version executable. And after a successful run in Donsol, I began a new game, and when I push the "Run" button, the game reset every time to room n°1.

Problem solved by shutting down the .exe and start a new one.

I've had two of games where I've gotten to the last floor and it bugs out. Both times I had less than 4 cards remaining, which I suspect may have something to do with it. Also, I don't think the XP counter goes above 52, which I'm not sure is related or not.

What happens is that I get to the last floor, I click a card and it flips, but the effects don't process, and it doesn't say I've completed the dungeon afterwards.

The first time I got to the last floor with one monster card remaining (which should have killed me), flipped it, took no damage and didn't die.

The second time, I got the last floor with the last Donsol and a potion card with enough shield and health to win if I drank the potion first. But flipping the cards did not trigger the potion or the damage and the win condition didn't trigger either.

that was fixed in the last build :

Rodrigo, I'm looking into that right now. I was thinking, would it be fun that every completed dungeon makes the game harder? So like the second run, you have 20 max HP

Just popped in to report the escape room bug, but it's already been reported. (Loving the game btw)

I'd personally love that kind of streak system that makes dungeons a little harder each time you win consecutively (definitely make it reset to 21 when you lose though). Something as simple as -1 max hp per consecutive dungeon-win, like you mentioned, would be great for replay value. It would obviously get impossible at a certain point, but that only adds to the excitement when you getting lucky and survive at very low health.

*edit* While I'm here, a fullscreen option would be nice. The game window is very small.

Okay! I will implementing that as I fix the restart bug :)

If your shield breaks when you die, it doesn't display 'Broke!' like it normally does. This has caused me to go 'huh why did I die' a couple of times now.

On a similar note, if you die on the fourth card of a room it draws the next room. I guess that isn't a bug per se but it seems more sensible to stop the game before the draw - both since that's how you'd play the game in real life and otherwise it looks like the game is continuing.

The card called Empresss should probably have one less 's'.

The potion rule could be worded better. I didn't realise that wasting a potion still counted as using a potion, and used three potions in a row assuming that I would get the healing from #1 and #3.

This is less a bug and more a design thought, but I think the game could visually communicate the 'state of play' better. Yes, one can work out whether attacking an enemy will break your shield or kill you, or using a potion will make you waste it, but if there was some visual cue by/on the card (e.g. it was tinted slightly?) that would make it a lot clearer. Part of the appeal of Donsol's design is the minimality and it would be a shame to lose that, but I still think it's possible to retain that and communicate more visually.

If the streak system as described above is implemented (which I am completely in favour of!) then the health meter should read current/max so you don't forget what your max health is!

p.s. I found this game thanks to the RPS article, watched the tutorial vid and thought 'this looks like my sorta thing', so I bought it and have been enjoying in greatly since. Many thanks for making Donsol!

Thank you for your feedback :) I am building the updated builds at the moment and they include fixes for the post-death draw, the empress typo and the potion guide has been updated!

I will see what I can do about the state of play, I like the tint idea. I think I can implement this simply.

Hey, I discovered something new today.

When you are in the last room (near to 52XP) and if you have no more enemies to kill, the game doesn't allow you to escape the room even if you use all the potions and shield in it.

After I select all the cards, the game is not finished (and if I press "Run" nothing happen)

EDIT1: Had the same bug, with 2 cards only and select the shield at the end.

EDIT2 : I can have "Completed dungeon !" message when I chose a potion at the end. So it seems to be a "last shield selected in last room" bug here :)

Looking into this right now :)

Any news? I downloaded the game today and found the same bug on my first time escaping the dungeon. Not a big deal, it just reduced the emotion of winning :-)

Hi! That last room potion bug should be fixed.

You have the latest build? What do you mean by "escaping the dungeon" :)

I downloaded the Windows 10 64-bit from itch.io yesterday. I don't know how to tell what the last build is. By "escaping the dungeon" I mean win. I recall the game telling me "you've escaped the dungeon" or something like it, when I won a second time.

Oh! The second win in a row. Let me test this out right now :)

It was the first one... the second one (after restarting the game) worked fine.

New bug with potions in the latest update. If you finish a room by drinking a potion, and then attempt to drink a potion as the first card in the next room, you'll waste it.

EDIT: another bug that's been in since the last version that I had forgotten (sorry!) to mention before. If you run Donsol via the itch program, when you close out of it the itch app crashes. Furthermore, if I try and run the game in Sandbox mode, it won't start at all!

Donsol seems to be the only game which causes this for me.

Curiously if you beat the game and hit restart, then you can quit it just fine from any point thereout. I guess that's extra incentive to win ;)

EDIT: Ok so this is *really* minor but:

- On the first turn, you get one card of each suit, right? For diamond, heart and spade, the picked card is one of A2-9, but for clove it's one of 2-9V. I've been poking around in the source code (for my own amusement) and discovered this looking at deck.js - I think the 26 should be a 25 (because you draw the diamond card before the clove).

- If you've just Entered Donsol, then pressing space will restart as opposed to running. However, if you press the 'Run' button in the top-left corner something weird happens that's neither running nor restarting:

Thanks! I've just fixed these 3 issues. I will make new builds :)

I just had a game in which, on my last draw (with three cards), activating any of them didn't do anything. Two were monsters, one was a potion. No numbers changed at all and the game did not acknowledge that I had completed the dungeon.

I also noticed that after completing a dungeon once and starting a new game, the space bar was restarting the game instead of running, even when Run was an option. I meant to try and replicate this, but that means I have to get all the way through the deck again, and I'm not that good at it. :)

This is an awesome little game though - thank you!

Having the same bug as CPC_Rodrigo, only on the Mac version. Unless I clear every card in a room, hitting Run or the space bar resets the game instead of performing a run.

It seems to trigger whenever I complete a dungeon. It usually works fine on launch, but once I win a round, it starts and I have to close and relaunch the app.

New builds are up :) Thanks a lot for the feedback and bug reports!

Thx for taking your time to fix them quickly !

-Taking a potion does nothing (the HP meter does not increase)...

-When you die you can't restart because your HP stay negative... so you can't take any card.

I'm the worse at deploying working copies.. I need to find a workflow.

Can confirm both bugs, waiting patiently for the new build! :)

they re up! :D enjoy

Seems fixed except they're grapically wrong the first turn you restart (they show what your last state was before the restart). After the first turn they correct themselves.

p.s. well done for all the fast bugfixing!

I may not have pushed that change yet? I'll double check :)

Keep it up, I'm sure you'll get to the end soon. If you really can't figure it out, make a screen recording, I'm sure someone here can give some advices.

Bug on Windows (other platforms untested): not fatal, the shield "maximum" doesn't appear to  reset between games. Makes me go 'huh' every time I see "20/0" o/s.

Rekka and yourself are inspirational, love the style of Oquonie and have lurked Nataniev for a few years now.

Thanks for the PR :)

I know this is fairly dead, but I might as well chime in with a problem I'm having; I can't zoom the game in at all, on Windows. Ctrl+scrollwheel or +/- do nothing.

We monitor this thread.

There is no zoom option, where did you see that a zoom option was available?

Apologies for coming off as rude. I was simply assuming by how there are screenshots showing the game at a much larger scale, though I can guess those are either illustrations, are from an earlier version, or were taken on a device with a lower DPI.

I was actually fiddling with some of the CSS to make it scale with the window's size when I posted that. I ran into something of a brick wall and kind of wasted an entire day on it, but now I've actually got it! I made the game scale (mostly...) nicely with higher window sizes. 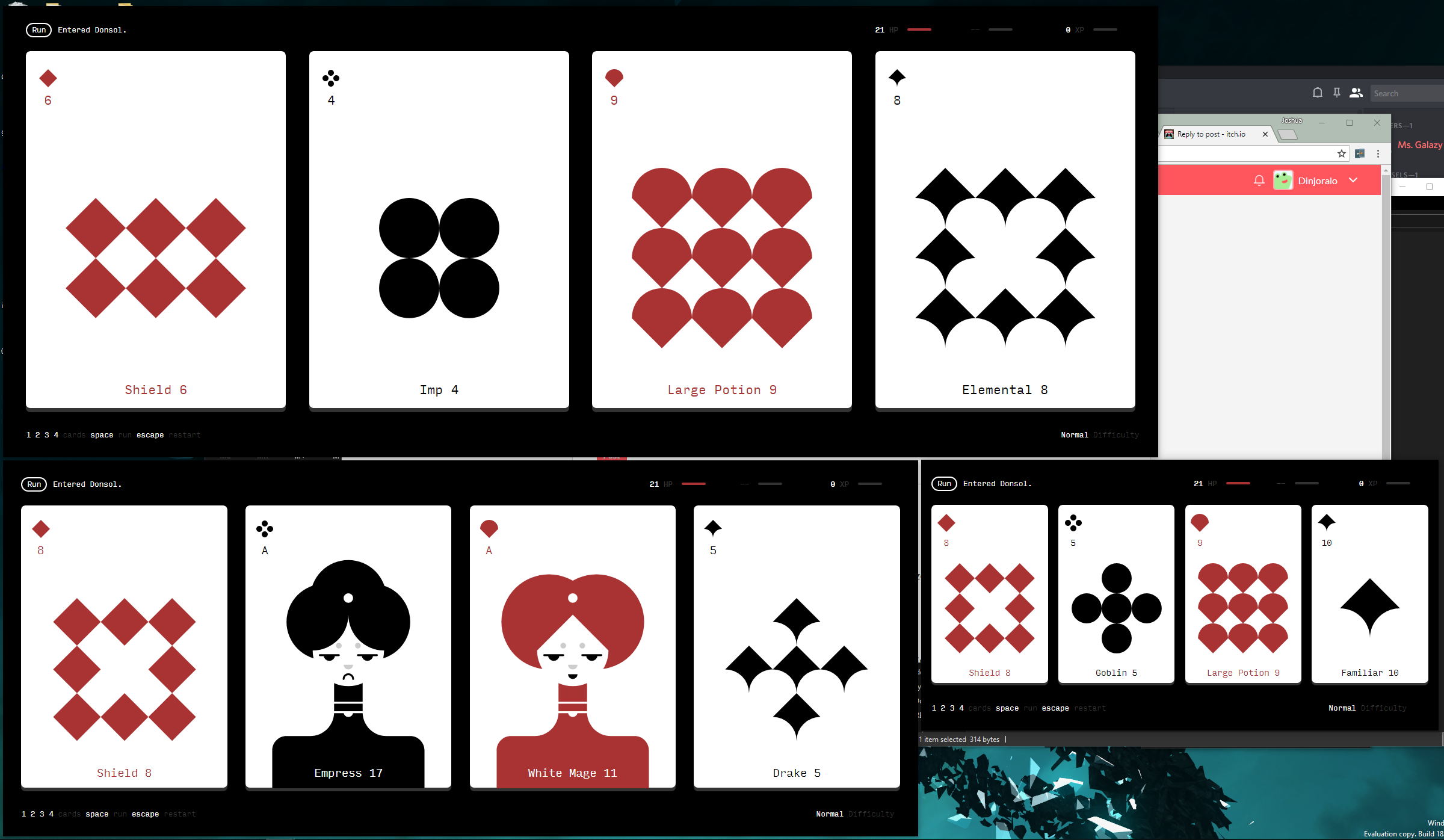 If you want, I can supply what I changed. Though it definitely isn't perfect.

I'll clean it up!