Add to collection
SotECommunityDevlog
Songs of the Eons, 0.2 community » Future concepts and ideas

They are 1-2 feet tall and live in massive hives on cliff faces. They mostly get the food required by sucking on wild animals and eating tree sap. Most hives are an incredibly liberal and open society  that is tolerant of many, however they are treated with disdain  by many races because of their uncanny resemblance to the much hated lesser mosquitoes.

Fascinating concept.  I like the idea of a race that is considered contemptible for reasons other than their actual behavior (but presumably these guys could parasatize intelligent races if they really wanted to?)  Imagine you are a human merchant visiting a hive, and how uneasy you'd feel knowing that you were surrounded by a race of creatures specifically adapted to parasatize you.  At the very least these guys would make for a cool "monstrous" race to interact with.

Technically they would be able to  parasitize  sentient creatures but because of the way they are built it is not a reliable food source on a mass scale. I imagine they were kind of forced into this ideology by their frail body structure and super long proboscis that kind of gets in the way (they don't really have the core strength to do any efficient attacks with it). Their only redeeming quality is their excellent flight and dexterity. It's has been an uphill battle for them for their entire existence, and the only way for their survival is absolute unity and making no enemies.  In warfare they rely on traps and siege weapons and if that fails they rely on sheer numbers, coupled with the fact they make their homes on cliff faces, they are usually not attacked by other races. Please tell me if you have any changes or adjustments. (:

Maybe there would be a more developed/beefier form of mosquito people that are more well equipped to parasitize other things that can fight back. They would be like 5-6 feet tall and have a much shorter proboscis, about 1-2 feet long depending on the size of the mosquito.  They would probably be a big part of the bastardization of the smaller mosquito people even though they are much rarer than normal mosquitoes. irl mosquito larvae are water born and eat algae, also mosquito larvae are the same size if not bigger than adult mosquitoes. So maybe they would have a lot of their primal agricultural advancements built around breeding pools. I'd also just like to say that it's really cool to be able to do this. If this game turns out, I think it's going to fill a niche a lot of people are looking for. It's just cool to be able to suggest things one on one to the developers of this game that has a decent chance of getting really popular.

How will they support a large population with, essentially, a hunter-gatherer lifestyle? I suppose being able to fly will let them harvest over a much larger area than human hunter-gatherers, but effective population will still be very small, unless they live in a place like the pre-colonial Great Plains that had a ridiculous number of large herbivores.

But what if they were more like Mongols? From their cliffside homes, they could range far and wide to cultivated stands of sap-bearing trees, and manage great herds of livestock to feed off of. Habitat and population density would be essentially the same as steppe nomads, although they could also thrive in tropical grasslands where horses can't really live. Considering the largely parasitic relationship that steppe nomads have always had with settled peoples, having a race of literal parasites fill the same niches would be quite fitting - especially if, in actual terms, the literal parasites are less parasitic than human nomads. One could imagine fantasy China allying with the mosquito people to keep human steppe nomads in line.

I like that a lot.  I think because of their ability to fly and general ideology on life they would be quicker to unify between hives. I also think a massive barrier between themselves and how their portrayed to the other races will be language. With no vocal cords or even the ability to make noise out of their proboscis or breathing siphon their language is based entirely of of pheromones and vibrations. This combined with their uncanny nature will severely limit any attempts at diplomacy. Another interesting thing in irl mosquito larvae is that they are the same size or bigger than the adults, as well as much heavier.  These mosquito people larvae, although much less intelligent (maybe not even sentient yet), could be an interesting extension to the mosquitoes militaristic capabilities.  Maybe even though the average Mosquito-Folk's combat ability is poor, their young could be proficient in combat underwater. This could be interesting to see how the mosquitoes would react when they have the upper hand in water based combat considering they were kind of forced into their liberal ideology due to their stature especially if there are are going to be any water based races. This could also be an interesting tree of technology finding ways to maximize the time spent in  larval form while also being well fed and prepared. (sorry I took so long to reply). Below is an image of a real mosquito larvae. 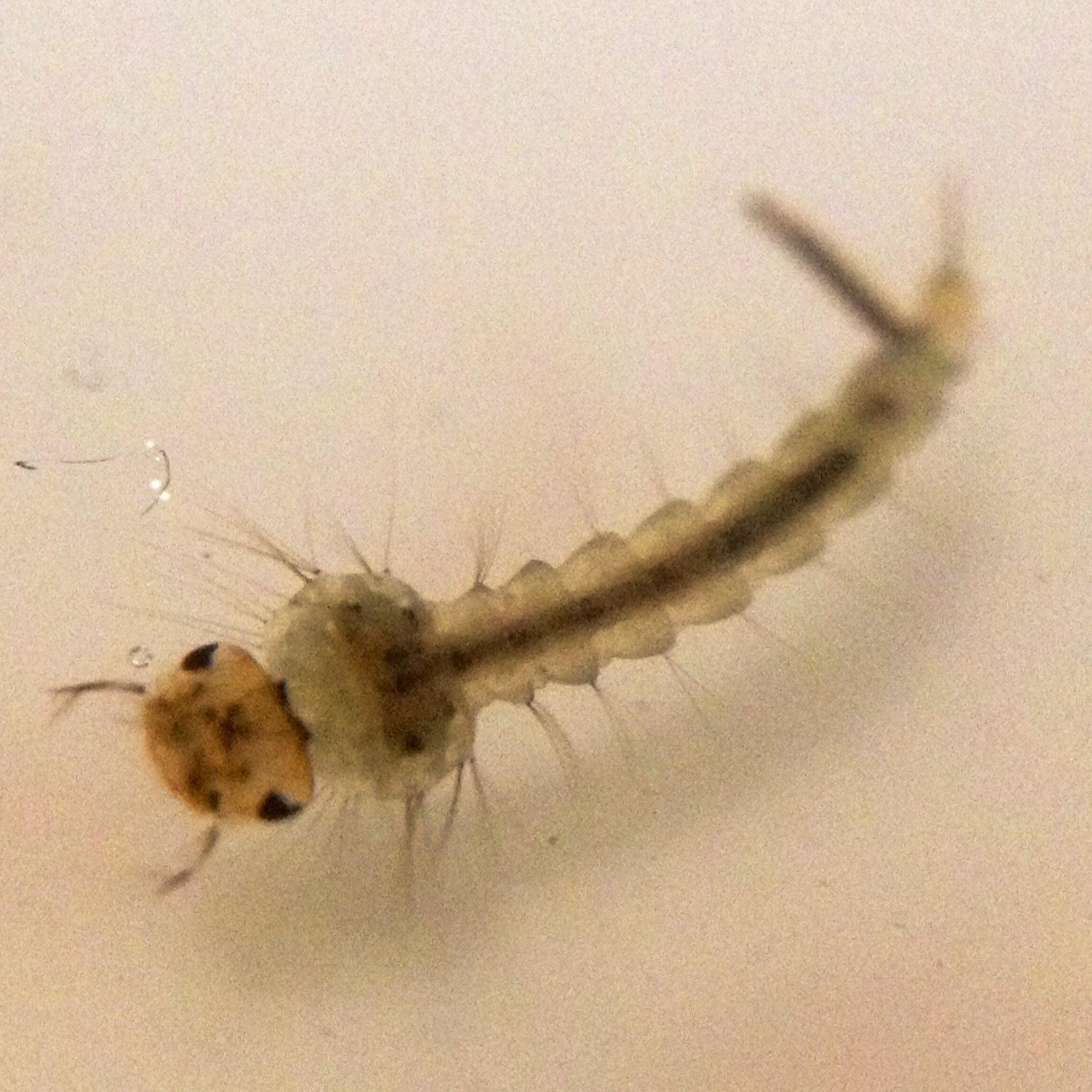 Another important factor in regards to their relationship with other races would be their possible predisposition for spreading disease.

In times of scarcity due to overpopulation, civil conflict, natural disasters, and so on, it's quite likely that many mosquitofolk would resort to drinking blood from the livestock of neighboring races to survive. At first glance, this wouldn't be too big of an issue, it's not like cows can't afford to lose a bit of blood, except when you consider the fact that blood-drinking animals like mosquitos are a massive vector for all kinds of nasty zoonotic diseases. Normally, large animals aren't affected by mosquito-born diseases, but given how much larger and more dangerous the microbiology of a mosquitoperson would be, they could spread outbreaks in livestock populations very easily, which could then spread to the sapient populace through the consumption of infected animals. This would naturally cause other races to view mosquitofolk as an existential threat to their food supply. It would also allow opportunities for biological warfare, either as a defense mechanism or as mercenaries.

They would essentially be flying vermen, only more remote and thus harder to dislodge.

In regards to the language barrier, a writing system could make up for some of that, though communication would still be very difficult and clunky.

I think that the disease could also be an interesting barrier to diplomacy on the Mosquito’s  part. Maybe a tree of technology is devoted to help remedy this?

Maybe they would appear to be similar to Vermen to an outsider looking in, however, I imagine their society is a lot more uniform. I think that a singular Mosquito Person  may be similar to a single Vermen in stature but with severely limited autonomy and individual problem solving. This results in a more organized society.  This means only higher up administrative-level Mosquitoes have autonomy levels capable of making decisions and advanced problem solving abilities. This form of society could also brood a form of selflessness not only regarding their Mosquito People peers but regarding other races. Maybe their society is similar to that of bees or ants? With differing tiers or castes that are physically different and have their own roles.