A charming indie game about magic, cute creatures and adventure! · By

If you'd like to suggest a new feature or changes to an existing feature, please let me know about it here!

Hi there! Is there any chance of adding a male protagonist option?

This would be cool. I know dev wanted to add character customization, but idk how much/how in depth.

I'm not planning on adding a male player character for now but it is requested a lot so I'll think about it!

Just bought it today and I LOVE IT.  I'm incredibly excited and just want to know everything about this game. I know it's still pretty early before official release and what not, but here are somethings i noticed:

Hi! I'm happy to hear you enjoyed the game :)

I'll just go through all of your suggestions, hopefully it will answer everything!

1. You will be able to romance the characters later on and date your favorite one.

2. I will definitely add a map and a quest tracker in the next update, it should help with that.

3. I could make it easier to collect everything from the tree, I'll think about how to do that!

4. The forest is still something I'm working on, in the next update there will be a potion energy and special levels that you can reach.

5. Yes! The character customization will be for hair styles and clothes.

6. I think I will make changes more with the moons rather than the seasons, it would fit the alchemy theme well!

7. Yes, I want to make night/day ingredients too.

8. I do want to add familiars in the game but it would be much later in development.

Thank you for playing, I hope you'll share your ideas with me in future updates too! :D

Thank you for responding! I really do appreciate your time not only on the game but to respond to people!

I just streamed this game for probably like 5 hours and I'm sure I will think of some other things to comment on eventually, but here is a list of both bigger and smaller things that I wasn't sure if you would be interested in hearing:

1.  PLEASE expand the cow and sheep barn. I was absolutely heartbroken when I tried to buy the third cow and was completely out of room with the two sheep and two cows I already had. I'm not sure if this was already planned out, but there is a bit of space around the building and I would love to cram more of those little guys in there. The cows are my absolute favorite and I NEED. MORE.

2. Make those overhead notifications last longer. It took me multiple incidents to finally understand why you don't want to be out past midnight: you get robbed (by something)! I don't know if it's just my game or I'm doing something to make the notifications vanish quicker, but midnight warnings and things about those creatures were disappearing very fast for me. If there is a way those could last longer, that would be great.

3. Fix the forest please? I'm not sure what your plan is, but oh. My. Goodness. I got so incredibly stuck. I don't know if it's meant to be endless, but the farthest I ever got was level 13 until it hit midnight and I got thrown back. I either can't find enough benches and run out of energy  or I literally run out of time in the day. If there's a way to get potions that can increase your energy or turn back time, that would be incredible.

4. Also along with the forest, it was starting to bother me a bit that the character doesn't face forward every time she enters the next level. This probably seems like the smallest thing in the world, but when you're racing in the clock and aren't thinking too hard, it's extremely easy to either accidentally click the exit or run the wrong way and waste time. Like I said, a very small detail, but it's just something I noticed that you may want to be aware of.

5. Another small thing: maybe the Dark Moths (I believe that's their name) should be a bug you can only find available during the night? I know that there was a little tip I got maybe a second to read but it mentioned something about only being able to get a certain resource at night, but I haven't noticed anything like this yet. I thought maybe the Dark Moths could be added to this list since they sort of stick out like a sore thumb during the daylight.

6. I also saw a comment that said it was a little frustrating having to click multiple times around the tree and I agree. Nothing major, but it would  be nice to mass-collect from a tree in one click.

7. Another issue that I'm unsure you would be able to fix is that there are some interesting camera "issues" every once in awhile. I've found that whenever an NPC walks up in a certain way, the camera will suddenly zoom in on the character in a very abrupt way and I'm not sure if this can be avoided. Also along the line of camera "issues" (in quotes because it's not too big of a problem): is there a way to fix the way the camera works/the roof is with the chicken coop? I don't know if I was only repetitively realizing it with the chickens, but the camera kept running into the roof and I would blindly click on the animals. Just something to think about, but that could have easily been user error.

8. Another thing about the forest that I forgot: after my longest attempt (when I got kicked out at midnight) there was a small glitch where the energy and level were on the left side of the screen in the morning. Thought I should let you know! 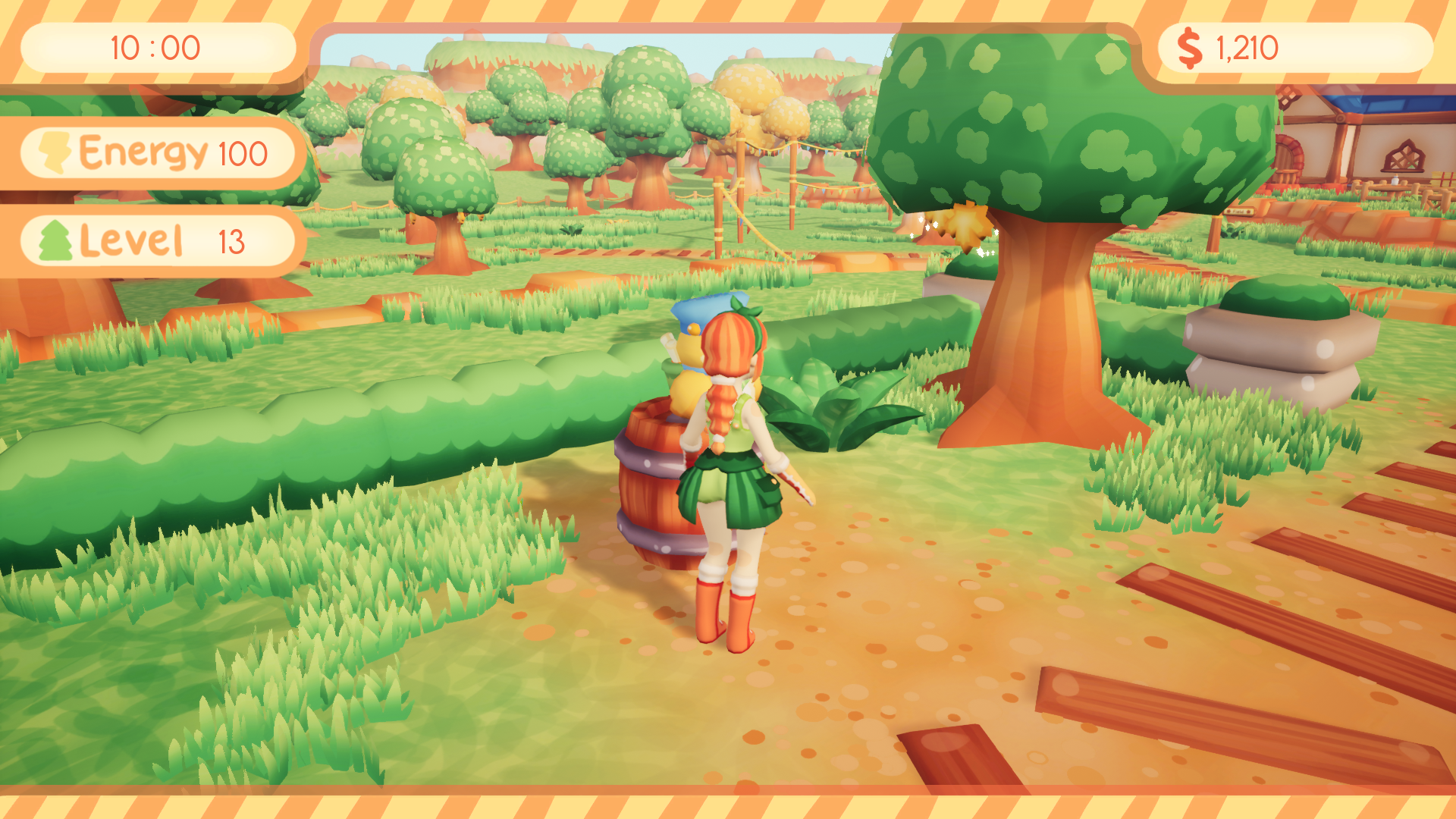 9. What are gifts? I was extremely confused by delivery quests for the LONGEST time. I thought you had to gift the items to the specific person, and let. Me. Just. Say. The professor was my least favorite person for at least an hour. He would not accept my ladybugs as gifts for the life of me and we kept having these negative interactions and I didn't understand it was as simple as just chatting with him. I guess I just assumed that the gifting interaction was how you turned in quest items, but I know better now. I still wonder, though: are gifts something that are currently a part of this stage in the game and what can they do for the receiver/me?

Another thing to note about getting a little confused: something else I read had mentioned how there were some things that were a little difficult to pick up. I think just adding a simple, small "How to Play" guide or a tutorial would help immensely. Some things I was confused by was why I was feeding animals/if there was a benefit to what I picked, how to plant crops, where could I get dark water, did I have to go to bed by a certain time, etc. All of these things I did learn with time, but I do think a tutorial would be greatly appreciated.

Overall, please know that any of these nit-picking details are in no way meant to overwhelm you so I apologize if they did. I am always a player who loves looking at the small details and they're one of the first things I noticed. I hope to play a little more soon and I will make sure to let you know if I run into anything else. I am sure more will come to my head once I step away from the game for a bit so I will let you know of anything I remember. Thank you for taking the time to read through my feedback and I hope I placed it all in the right thread. Take care!

Hi! Thank you so much for playing my game and taking the time to write this, it's really useful!

1. I will definitely add a bigger barn & coop! It will probably be in the next update. You'll be able to use the lumber collected in the forest to build and upgrades things around the map.

2. Yes, I will make those notifications last longer! I didn't realise how short some of them are.

3. The forest is still a work in progress. The main thing that will allow you to progress further is upgrading your axe to lose less energy when cutting down trees. There will also be an energy potion and a hot air balloon  to fast travel in the forest.

4. Yes, that would definitely make it smoother and I think I can add it in the game easily!

5. I'm still figuring out which items I want to spawn at night, and the dark moths will be one of those. It's a feature I will add in the future for sure!

6. Yeah I'm still thinking about how I could change the trees to work that way.

7. I'm not sure how to fix that, I think it's mostly an issue if your camera is zoomed out a lot. You can always zoom in when in a building so the camera isn't in the walls. I'll see if I can add something to make it smoother though.

8. Thank you for finding that bug! I'll be sure to fix it soon.

9. I'm sorry you had so much trouble with that! The gifts are useful to boost your affection with a villager, which will unlock quests and events with that villager when it's high enough.

I'm thinking about adding a library in the player's house where you can read about different features if you're missing information about something. It will probably take me a bit of time to complete it but I think it would help new players for sure! Hopefully we will have a wiki to help with that. Thank you again for the feedback! :)

Let me start by saying I absolutely adore this game, it's cute as can be and the story line is fun and unique!

I do have a couple of questions!

1. When the full release comes out, will I be able to continue the game I'm playing now in early access?

2. If so, will the new features/customization be available in my current game or will I have to start a new one?

Thank you so much for all the hard work that went into this game, I know lots of people will be so grateful!

Hi thank you so much!

You'll be able to play the early access and full release versions either here or on Steam if you want! I'm not sure how compatible the different versions will be, I think you would be able to keep playing with the same save but a few things might not be saved properly.

I'm really glad to hear you enjoyed playing the game!  :)