More than rats, dungeons, and challenges. · By

Check what has been developed or modified lately. You can also subscribe this thread to keep updated. 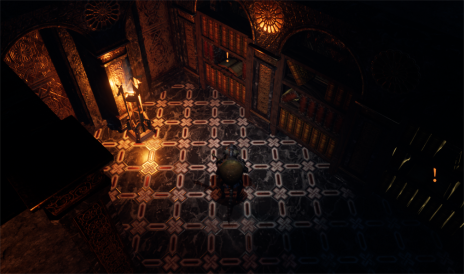 -Quick Tutorial has been updated, now it has more information and clips that show how to perform some abilities.

-Fixed some levels in which enemies were not spawning, or they were just stood still doing nothing.

-Added buff icons, they will appear on top of health bar when drinking a determined potion booster

-Added additional information on assignments, a chapter and rank from: S, A, B, C will pop up depending on the assignment difficulty

-Molten Grounds is unlocked and now is part of guild assignment; it can be found as Secret Delivery assignment. Previously players had to beat a mission in order to access this level, but now it can be played it at any time with a generous gemstones reward

Firstly I want to thank all those people who supported me during Early Access, and believed in this project. After almost a year of developing In Darkness, I consider the goals which I initially had for this game were achieved. Eventually, I introduced some other ideas that came along the process, and wasn’t in my plans. Also during this year of developing I was opened to receive any ideas from part of the community to make the game even richer, and give them the chance to get involved in the development process. Nonetheless, it doesn’t mean this the end: may more content be added in the future depending on the community, and may have some stuff that it still need to be fixed and went unnoticed, said so... I’ll still be here for when the right time comes. I got some other good news: I finally signed in Twitter, and along with YouTube these are the channels that I will be more active for the moment, so if you guys want to stay in touch, know about patch notes or track future game projects please follow me:

-At community request, Field Of View has been added to Options Menu.
Please note, this optiont can be scaled up to 90%, and The FOV in a video game may vary depending on the aspect ratio of the rendering resolution.

-There's a minor issue with the flying device controls. This rarely may occur when performing an unknown maneuver; to solve it just press up or down, or move the ship in circle. If this is not a solution for you, and it’s definitely ruining your game play experience, please report it on forums, I’ll try to fix it as as soon as I can.

-Take this chance to save more on In Darkness

Thank you very much for your feedback and support.

-Quick Tutorial has been updated

I highly recommend to play this tutorial level

Watch some skills of Assassin class on this new demo gameplay video:

If you have any suggestions or think something still need to be fixed, please don’t forget to post on forums, I’d appreciate your feedback.

In previous Patch 3.0.2 there was a bug in Quick Tutorial when changing to warrior class: no weapons spawned.
It should be fixed now.

In Darkness was created to bring a versatile game play experience to players who enjoy game genres such: action role playing, dungeon crawler, hack and slash, survival, rogue like, puzzle, space shooter, and many others.

Developing In Darkness has been a real challenge, however it has been more challenging to show players the potential of the game avoiding to reveal the end of the movie. That’s why through this further notes, I’m delving deeply about some of the game features, some of its mechanics implementation, and what’s behind the story.

Game Mode
The game has no modes of difficulty to chose from, however there are three different fighter classes that determine the level of difficulty in game. In Darkness uses auto-save system, each time character travels to another area, game is saved automatically allowing players to continue the game in the future if they want to quit game, or if their characters die. Also there’s an option to abort mission, in case players haven’t come prepared to complete a certain assignment.

Challenges
In Darkness is full of challenges, fights are based in real time, moreover, timing is crucial to survive in battles, dodging and missing don’t rely upon external factors like dexterity, but it depends on real player’s accuracy. Challenges are not only based on fights, but also on how to get information to clear levels, navigate mazes without map system, solve problems, discover patterns, etc.

Level Design
Maps are composed mainly of levels and sub levels; for example fighting challenges are played in short levels. While some retrieval missions are played in intricate hallways, which lead to another sub level.

Quest And Rewards
Each assignment has a degree of difficulty: for instance, there are some levels where some creatures could be stronger, or where levels could be larger. Reward amount varies according to the mission rank. Mission ranks are classified in S, A, B, C, where S, is the most difficult. Rewards are given when a certain mission has been completed successfully.

Character Customization And Damage
There are several ways in which players can see their characters change: by changing character’s fur; by trying the different armor sets available in game; by exposing the character to damage, since the damage impact will be reflected in the armors, so if the character reach a determined damage percentage, the helmet or the breastplate could break, if damage percentage drops to zero, the character becomes totally vulnerable. Another way players can see their characters changing is when blocking, doing so, characters take a specific ethereal aspect, and it may vary according to the potion they drink.

Items And In Game Currency
Some creatures may drop random items as they are eliminated, also these can be found in the dungeons, but if players want to guarantee their victory nevertheless, equipment and potions can be purchased with gemstones at village stores, being possible to take some extras to missions. Gemstones either can be earned by completing missions, or by getting them in the dungeons.

In Darkness takes elements from classic games like Zelda II: The Adventure Of Link, and Ghost 'n Goblins, such elements are reflected in several ways, for example: Link carries a sword and a shield, and he can get magical powers, for this reason battles can become tactical. Furthermore, some levels in Zelda II are complex mazes, and keys must be founded to unlock determined doors to progress in game.

In contrast, Ghost 'n Goblins knight Arthur, must face gargoyles, dragons, the undead, a wide variety of enchanted creatures; his weapons are also varied, each one do its job, which makes it a tactical game according to the levels; another relevant aspect is when Arthur is hit, he loses his armor leaving him vulnerable. Just to mention some few elements about these two classic titles that can be seen in the game, perhaps not too apparently.

Ghost 'n Goblins (armor lost after has been attacked)

In Darkness (new armor after has been attacked)

The plot is based on the age of discovery, but also on Homer’s Odyssey, giving form in conjunction to a fantasy world, where brave warriors dare to adventure in unknown worlds, and who are subsequently doomed, since many of them will forget who they were, thus won’t return to their homeland anymore. Memory notes from those doomed travellers can be found along some levels in game, and such registered notes reveal more information about the travellers origin. 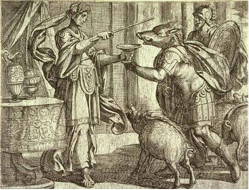 In a very compressed way, In Darkness incorporates several game play mechanics from the genres mentioned above, moreover, it tries to take them a bit further. That’s the case of the items usage: commonly the inventory in rpg games, can hold up to 30 items, also characters can use the items without effort, for instance: players can spam a key or button to heal their characters instantly while they’re fighting a boss. The inventory and the items work a bit more tactical in In Darkness: slots are limited, and can store up to 8 items, the idea is to watch characters doing their things, and make feel players they’re also vulnerable, doing so, takes slightly more effort. For example, characters cannot heal during time battle, well, it is possible, but is too risky, because they must go through a process: first character’s weapon must be removed; then a potion from the pocket must be extracted and drunk; finally character’s weapon must be drawn again, that takes a bit longer, and don’t give much time to players heal their characters, if these are in immediate danger, so that’s another challenging factor in real time battle players can find in In Darkness.

In contrast to other rpg games, dexterity and experience points are fundamental so players avoid missing hits or make their characters stronger, and sometimes that not enough, also  they must equip them with lots of accessories. The mechanic in In Darkness is based on right timing, this is, if players can’t perform a determined ability at the right time, obviously they will miss a hit. In Darkness doesn’t count on experience system, but it has a currency system (gemstones), if players achieve an assignment successfully, they are awarded with gemstones; with this currency, armors sets, and potions can be purchased to make characters stronger, but just like knight Arthur if he takes damage his armor is gone. Fortunately players can get additional armor sets and boosters, so such items can be taken to their missions. Earning gemstones is not difficult, and all assignments are unlocked and available from the beginning of the game, with the possibility of being accessible all time if players want to farm gemstones on a specific mission they may want to repeat.

About space shooter games, there’s a special mission and it’s also available to be played at any time as well, this also integrate bullet hell, classic 2D space shooter, obstacle avoidance, but with some slightly difference: the perspective in which is played; the enemies that players have to face; being skillful is not really required, but there are lots of distracting factors that can stop giving players attention to incoming threat.

IMPORTANT
-Reset the settings in options, and quit game to restart it, if you purchased the game prior version 3.2.0.

In this update the main objective was to improve the gameplay experience, so the gamepad now covers more functions of the game: Start Menu, Pause Menu, the Inventory and more functions are supported with gamepad. Now players won’t have to drop the gamepad to click on screen. Also there was a significant improvement of post process, the environment looks more dense but smoother.

-Gamepad support improved (now it covers the game in a 98%, than what it was before a 40%).
-Camera was moved a bit further above of character.
-Added a secondary tutorial level designed for showing gamepad basics.

-Fixed the levels where transition was affecting the light.
-Fixed an issue that was performing hits before time, combo transition now is smoother,
-Fixed an issue when warriors got buff: visual effect didn’t remain as move to another mission.
-Some other minor bugs were fixed along the update.

Other notes or suggestions

-Is highly recommended playing with a gamepad for a better gameplay experience.
-Some options were removed since they were not helping with performance, moreover were screwing the graphics, or gameplay experience.
-If you notice something is not right while playing, please report it as a bug, I’ll fix it as soon as I can.