A Turn Based, Real Time Strategy Game · By

There is already kind of a guide (Getting into Base Wars) and that will help you learn how to control the game and use actions but this guide will hopefully have more advanced techniques and will be updated when game mechanics change (The other guide was pre-limited resources). I'll probably be posting the first few tips and strategies once the next update comes out (Which will make the game playable again). If you know any strategies that have worked for you then feel free to post them here.

Ok, so these first tips will be tips for the advanced beginner. You're tired of just clicking your guys around and want to start learning things that will help you if you ever decide to join the ladder. A lot of these are tips I wish I had when I first started playing.

This first tip is definitely something I wish I had when I was beginning. You probably won't see instant improvement from this tip but it's a good habit to get into and one I've only recently started doing. This is the order you should be doing actions in most of the time, Scout (not the unit) then do other stuff (I'll probably update this once I really get action order down and work out what the best order to do things in is). Always scout around you first, the more information you have the better the decisions. You don't want to move your army into position on the bottom of the map only to scout and realise your opponent is pushing the top.

2. Make sure you don't run out of money

This kind of goes with action order but make sure you have enough money for what you're trying to do in a turn, don't spend a "small" amount of money on a few scouts and then realise you'll have to wait another turn for that Zealot you were planning to build.

If you've got a unit near a corner, but you can't see around the corner, look at its move shape! Sometimes that will reveal the silhouettes of units that may be there.

Looking at the move shape of a unit is also the only/best way to spot invisible units (like upgraded Scout, and Ninja), so keep an eye out for those when you're moving as well!

^^^^^^^This is an extremely important tip for competitive Base Wars kinda like Wavedashing in Smash Bros. Melee. Don't forget this one!

Here are some extra things to think about.

Base wars is a pretty macro-heavy game (unless you're on really small maps like Bowtie) so focus on building up econ and destroying your opponent's econ. Keep in mind that micro is very important also so don't get rid of it! I used to have a saying that was "Micro wins battles. Econ wins wars" but now that the meta has developed I think a more accurate saying would be "Micro wins econ. Econ wins wars" Micro is important if you want to take out the opponent's econ! Basically, micro is important for the most important thing which is econ.

It may seem tempting to get lots of scouts since they're cheaper and generally better at fighting than builders. Keep in mind however that econ wins wars and if you don't have enough builders to use that econ then it's all effectively wasted! So build enough builders to supply your econ. Also try reinforcing the Nexus to help with the builder production (allows builders to be active on the turn they are built).

The next tips will be micro tips!

Ok, since move scouting is so important, here's a visual representation of what to do.

The stealthy way to move scout.

I've got a semi-real game scenario coming up next!

Finally, after a longish wait, here's the next addition to the Advanced technique guide.

As the meta evolves the strategies in the game evolve too. When the game first came out a common strategy was the double mine. Where you would build 2 mines turn 1. On the smaller maps which we're now seeing more of, the double mine strategy doesn't really work. So what strategy should we be using now? A new, previously overlooked strategy rises up as the new strategy for smaller maps (specifically maps where you can build a pink mine turn 2 and the only pink econ is shared between the players like Zircon or Boombox but not Circles since in Circles there is Pink econ that isn't shared).

That new strategy is... The builder rush (no, it's not cheese).

Let's go through a game and figure out why this strategy is effective.

Here's a map of the map we were playing on (Boombox) 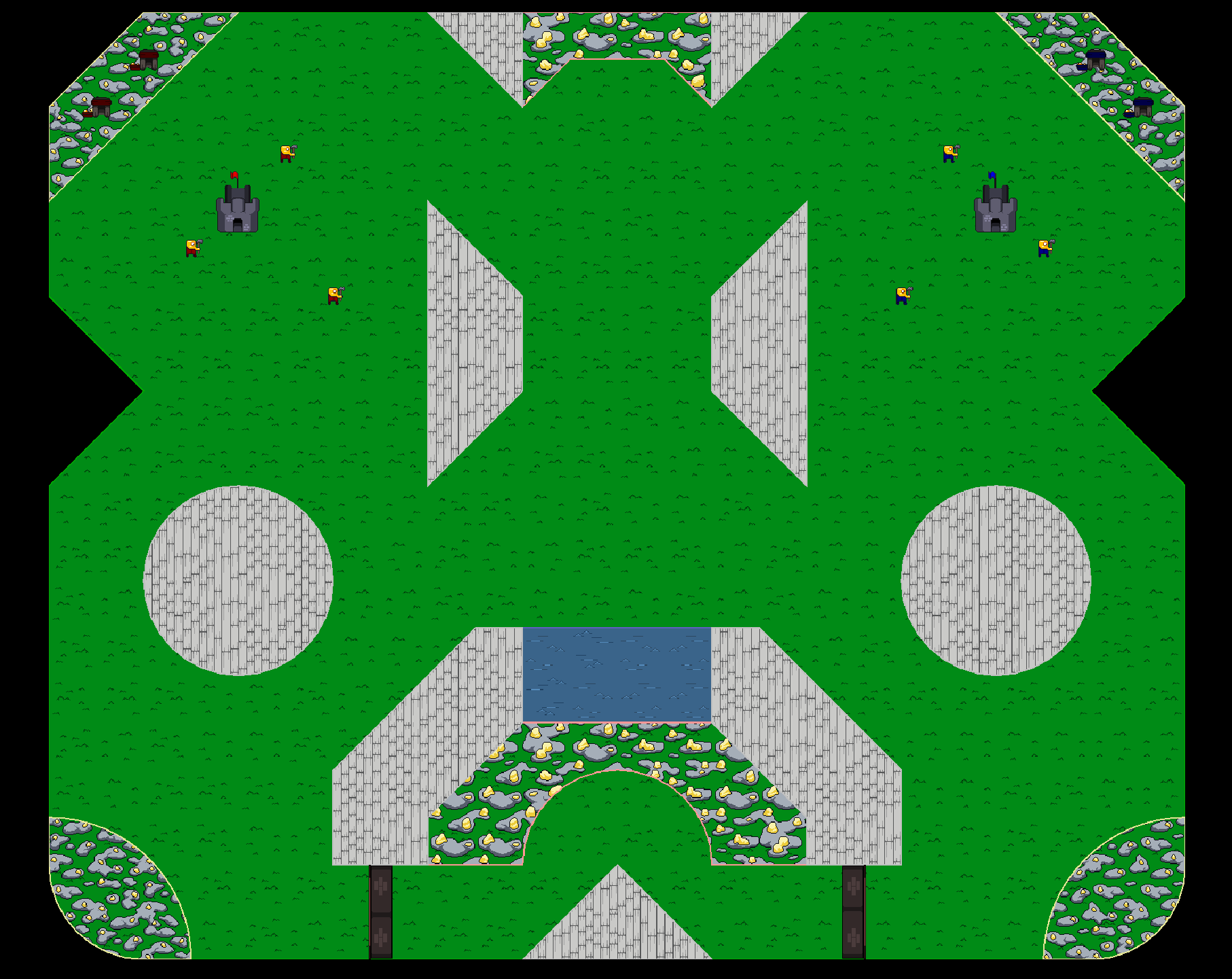 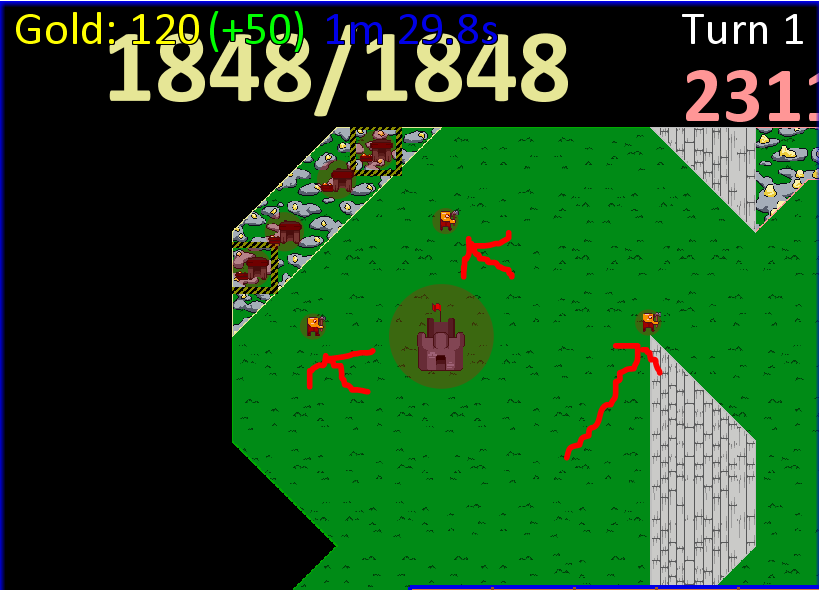 Here we see Red's first turn. Red (me) goes for the double mine sending only one builder to the centre pink econ, this turns out to be a massive mistake. 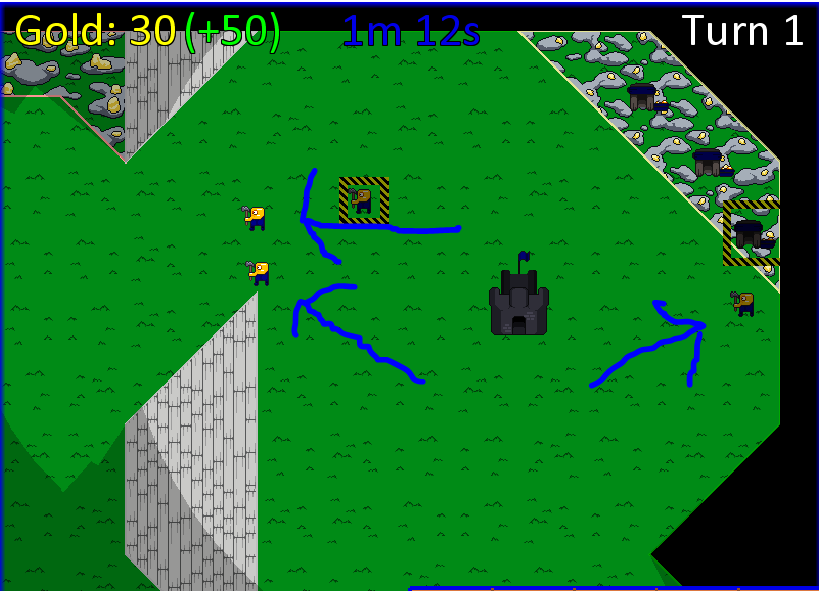 This is the builder rush (at least for Boombox). This strategy only builds 1 mine turn 1, sends 2 builders into the centre and uses the extra money to build a 3rd builder to go into the middle. Red is going to be completely overwhelmed and will have to give up the centre econ giving blue (Tetr4) a huge advantage. 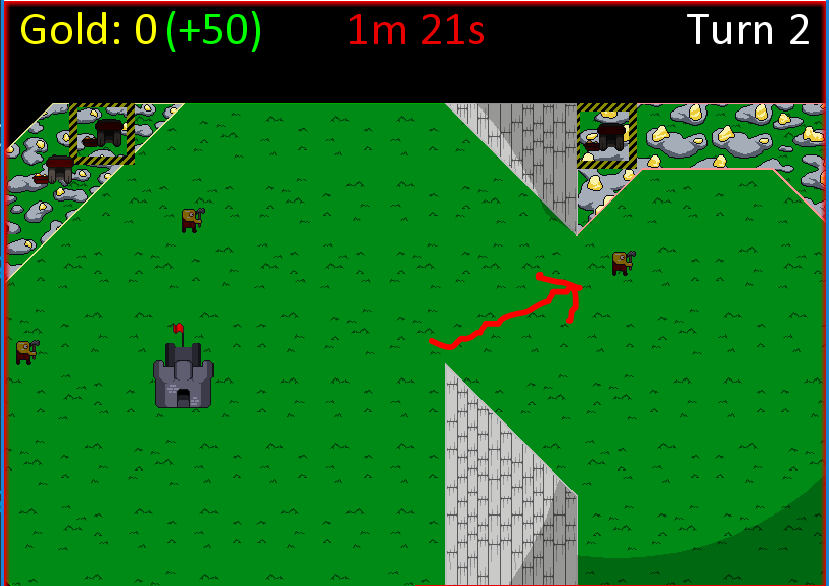 Here's the basic continuation of the double mine for Boombox, as you can see, Red gets a mine down on turn 2 which makes this map a small map and one on which the Builder rush will work. Red doesn't know what's coming... 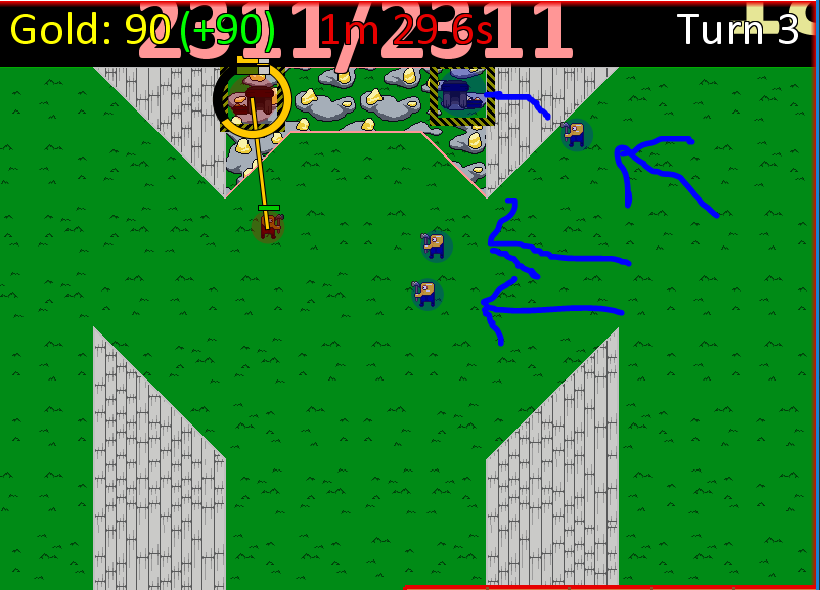 Boom! Blue storm into the centre sending 2 builders on the attack and using a little technique that I'm gonna call wall-building to get the mine built through the wall using the third builder (I might cover wall-building some other time, it's not too hard). Red doesn't really have any hope of holding the centre at this point. 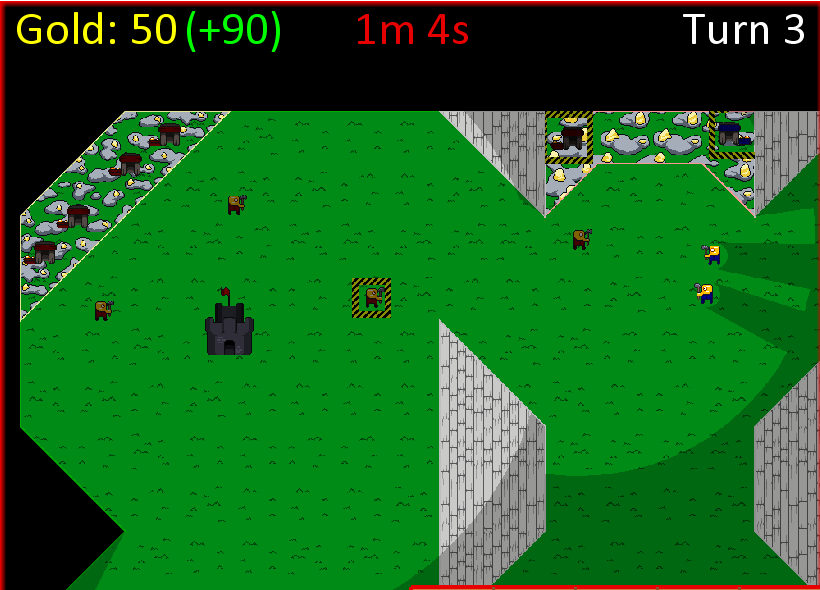 This is that last position from Red's perspective, all of Red's units can't move this turn because they either just finished actions or are still doing them, this gives Blue the first attack which is the last advantage Red could afford to lose. Red builds an extra builder in the vain hopes of holding the pink econ. Red inevitably loses this game.

That's the Builder Rush folks! I'm still brainstorming ways to counter it but it could just be the new opening technique to replace double mine on smaller maps.

3.0 has made a lot of balance changes. So it's time to make a post to discuss how these new changes shake up the meta.

1. Armoury no longer gives instant access to tier 2 units (Axeman, Gunman and the new Lanceman) to unlock the tier 2's you have to research them at the armoury which takes 1 turn.

It costs 100 to research each unit.

3. A new barracks unit, The Horseman has been added.

The Horseman has exactly double the movement range of a normal swordsman, however, it costs more and does less damage.

Quite a few units have been rebalanced with lots of little stat tweaks.

For example, the Swordsman now has 80 health instead of 100. I won't list them all but this creates a slight unit RPS where different units will be favourable against others.

1. Armoury no longer gives instant access to tier 2 units (Axeman, Gunman and the new Lanceman) to unlock the tier 2's you have to research them at the armoury which takes 1 turn.

This change adds some extra balance to different build orders. The meta was starting to shift towards armoury being the best tech to invest into every time, It still kinda is but you need to have a decent econ advantage to start rolling out the tier 2's, it also adds an extra decision of which type of unit you want to invest into (Melee, Ranged or Cavalry) which is a bit more deep than just unlocking all of them at once.

Rich mines getting nerfed in my opinion is an ingenious balance change. The meta was becoming very focused around barracks 1st and builder rush strategies since the rich mines were such an important part of the game. Going for normal econ was a desperation move. This change brings double mine back into the meta as a valid strategy and makes the amount of mines you build a slight bit more important than what type. Building safe econ is now a much more valid strategy.

3.  A new barracks unit, The Horseman has been added.

Ranged units were starting to feel like the more powerful units compared to the melee units, they did have less health but getting in and actually being able to do any damage to them was a challenge, especially with move scouting being a thing. The horseman can camp just out of the archer's range and close in and get the damage in. This completes the unit RPS of Melee > Cavalry > Ranged > Melee and makes the units a lot more balanced.

These tweaks just refine the RPS a bit more.

A little thing to keep in mind is that scout can even up any engagement when a unit is up against it's counter as pointed out by J-Rex. Also scouts have been buffed with the ability to see over walls (but not void if you mapmakers want to stop scouts from seeing over certain areas). Also cannon is nerfed even more with a 3 turn build time.