Today we're going to try to draw some skeletons. In the last tutorial I talked about drawing skulls. In this one, we're going to draw the entire skeleton. So if you're comfortable with drawing skulls from the previous tutorial, it's time to move on to the next step. I took a simple skull to start with and gave the skeleton a pose sketch: 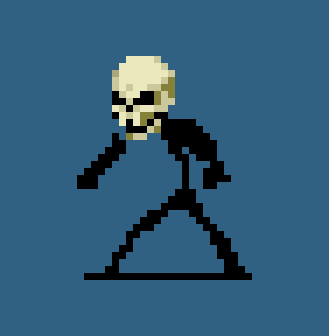 This will do for now. It's supposed to be his "battle" pose. Next we need to block in some more bones. 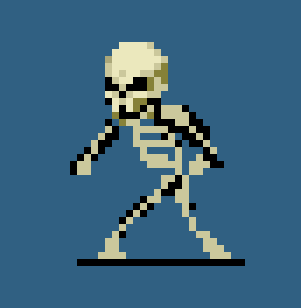 This isn't super realistic anatomy since it's pixel art and I'm going for a cartoony style anyway, we just need to show the main bones like the ribs, shoulder, limbs, hands, and feet. Once you have those features sketched, practice some shading. I'm not sure but whenever I'm shading, I usually make the key features a bit brighter than the rest. Just a little thing to think about. 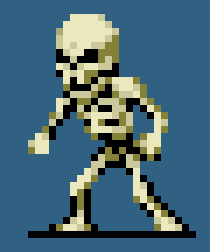 So that's the skeleton I ended up with. I was satisfied with it but I want to take this tutorial a bit further by giving him various gear. If you've never drawn weapons and armor, you might want to practice those by themselves before adding them to skeletons but here were some examples I drew to give you ideas you might want to try.

I will cover weapons and armor in a future tutorial because I think it's an important pixel art topic but for now this concludes the tutorial for now. Show me your skeleton drawings!