I am so sorry for creating such a buggy monster :D. I hope that besides all the issues you had at least a little bit of fun! :) As always there is "improvement plan", I hope one to find a bit of time one day to fix at least some issues in all the games I made so far :D.

Thank you so much! I am very happy to hear you liked it :)

Very fun game :) though I feel that the randomness of the fruits should be slightly 'less' random. It is good sometimes to do not have fruit and have to 'skip it' but sometimes you have to do it several times in a row.

Also a question - the rubbish bin closes and stays closed sometimes. Is it a bug or a feature? :)

Awesome! Thank you so much! I will try to implement it in new version. The only problem is I do not have any way of testing it on larger resolution. Any tips here? :)

Thank you so much! I am very happy you enjoyed it! :)

Thank you so much! It is early prototype. I hope to find time to develop it further in the future :)

Hello QuietBenchZen, thank you for the comment. This is very surprising for me! Could you please provide me a screen shot? I think this might be due to your resolution as Unity 'autoscales' the UI. Just to double check. Do you see a shop button in right, top corner? 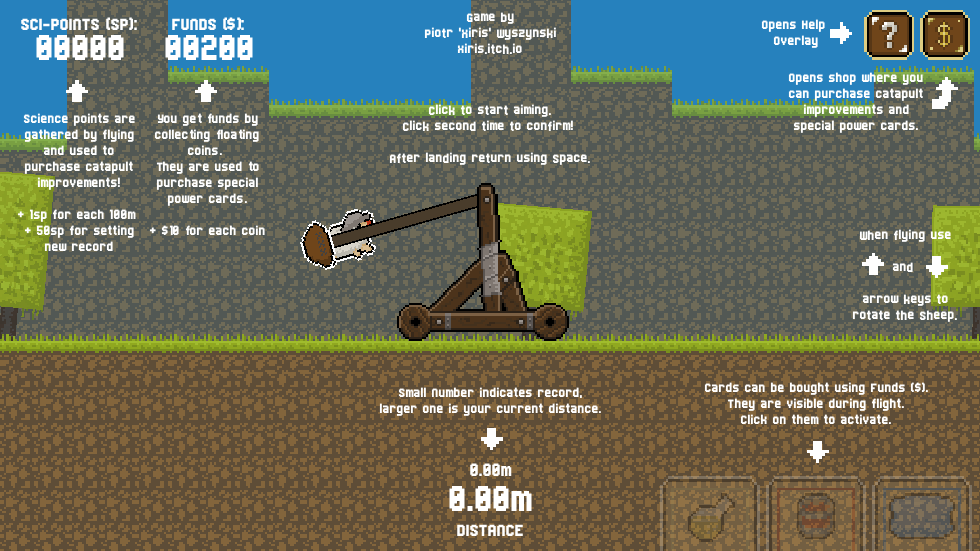 Thank you so much <3. I hope you enjoyed it!

Awesome! Cannot wait for the updates! :)

Thanks, this also sounds cool! I think I will go with the shader though :). It is probably the most performent and elegant solution :)

To be fairly honest this is probably the most playable indie game demo I played within last few months. The game design is just amazing. I had really good time playing it though getting closer to the end I started to feel the gameplay is a little bit repetitive. Saying that - I would be more than happy to pay for the full version.

I love the 'return to town in order to level up' mechanics. It forces the player to plan his/her endevours and constatly monitor number of return scrolls. At this stage however the village seems to be pretty dead. The NPCs are great but there is really not much happening. There is literally no interaction besides trading and leveling.

It's hard to say what type of attack the enemy performs. I just guess that the goblin shaman uses magic, though I haven't seen any indication of that.

The UI is awesome. Looks beautiful and is very readable however there are few improvements which I think could be nice:

- Drag & drop scrolls and potions to the hotkey bar to use them. That would mean at least 2 extra spots would be needed.

The character builds could benefit from some balancing (or maybe I just sucked as 'warrior'). My dex based ranged character was much easier to play than str-vit warrior. Being on the second floor I literally decided to reset the game.

The items that drop and the blacksmith items seem to be completely random. Would be great if at least one of them was slightly influenced by the type of build the player has. It was very hard to find items that would actually support my playstyle.

The chest in one of the levels was just AMAZING to find. The feeling was great but the feeling turned into a little bit of frustration seeing that the items that dropped are completely not for my character build haha.

Would be awesome if the dungeons where at least in some part randomly generated. I still think the game will have quite great replayability however this would increase it even more.

I do think this project has amazing potential. I would love to see the world evolve into more than village with dungeon. Please do not make it simple 'dungeon crawler', I really believe it can be much more than that. What I mean by that - you managed to create amazing, quite unique gameplay experience, the only part that could ruin it is repetitivness. I hope the game world will have various locations that you can visit, each being unique and giving something fresh :).

Over all - really great job. My next project will definitely be influenced by your game.

That’s exactly the reason I am asking. Your outlines look awesome. I tried to achieve that and decided to go with sprites which ended up too much work. :)

Completely silly question. The outlines especially those showing focus on active object were achieved using 2d shader or is it a separate sprite? :)

Thank you so much <3. I hoped to make the music myself but unfortunately run out of time :(, I preferred to have more levels than music :)

it's a fun little game. I'd actually agree 100% with Finiko. The main points I would improve:

1. Input - use one button instead of 3 for actions.

2. Visible feedback that the item is picked up. I actually picked up the blanked and had no idea I did so. I thought I made up the bed. :D

So just to be sure - I can't play this game without controller? :D

Yay, when I downloaded the .pck file and put it in the game folder all started to work.

I had fun playing your game. I do think the concept is nice, though I find it a little bit too easy. Once you understand that you can 'jump on broken hearts' to break them and are a little bit careful you can just go indefinitely down. Would be awesome if maybe the camera would be not only dependent on player movement but also on the time in game. That would force player to move quicker and quicker - at certain point causing him/her to make silly mistakes and in result die.

Definitely, when extended, it will make really awesome and fun game :).

Yeah, I understand your situation with sound - it is literally what I always do. I promise to 'work on it by myself' and then 2 days before deadlines I realize there is no way for me to do anything that would work well :D.

About the debris I am really not sure what could work best. It is just at certain speed there is already to little time for reaction - if the first arrow misses - then well, you die :D.

Good luck with all the changes! I will be happy to play the game in a while to see what changed :)

I am surprised that your game has no ratings at this moment. I actually quite enjoyed it. To be fairly honest I think this is probably the most unique concept I have seen during this jam? So really good job.

1. The game would definitely benefit from sound & music.

2, The 'broken wall' is covering the view for quite a long time. The effect is nice visually but makes the game much harder.

3. I am not sure if this would not make the game 'too easy' but I think 'arrow path tracing' (like a prediction where it will land) would help a lot and allow to play a single round for a longer time :).

Hey, unfortunately I am not able to play the game. I am receiving an error. I downloaded the first three files versions but none seem to work :(.

I tried to play your game but unfortunately the "START" button does not work :(. I like the spritesheet though so I think it could be lovely game.

Also just a small advice, people prefer to play the web based games, in case you make a 'downloadable' executable, add a bit of description and what's the most important - screenshots. This will encourage people to try your game :).

Amazing, I am looking forward to the second level :)

Very cute little game! Really enjoyed playing it. In fact it is fun even in one person :D.

The idea is nice but the execution failed a little bit. After putting the first 2 towers looks like I am able to kill all the ducks. That means - the game has no challenge after making first 2 moves.

The panel is covering 90% of the playable screen which actually makes it difficult to place any towers.

Hard to say anything about such a small entry. The platform movement is neat so that's great :). Much better than what I could achieved when I was just starting out :).

Yay! Thank you for your feedback :)

I created terrible aspect ratio! One of the first things to fix!

This really has old-school vibes. The mechanics, graphics and sound create a very coherent experience and let me tell you - this is probably the hardest part of making pixel-art game. I think you have done awesome job here!

This is probably the most well made game on this jam. It's a bit harder than I could handle but it does not mean it's too difficult. I am happy it defeated me as  I will be able to try few more times and maybe 'do it' at certain point :).

I am happy you managed to finish the game! Great job :D.

I already decided that after the jam is over the girl will be slowed down a little bit - that way there is 'more time for each action'. At this moment even small hesitation when you know what to do causes you to fail, I will definitely change that :).

I see the video is still not uploaded on youtube, so you can see 'walk through' here:

Thank you so much! Let me attach the 'speed run' so you can maybe get trough the level you are struggling with :)

This is actually very good idea. I may in fact implement the ability to change key binding :).

I am very happy you liked the game!

No worries! I think if you work on the game a little bit it will be even more awesome! :)

So this is at this moment my favorite jam entry. Really polished, great sounds and beautiful graphics. I wish I could make such an nice art.

Unfortunately I got stuck in level 4 as the 'flying eye enemy' spawned behind the level wall and I could not kill it. Also I feel the difficulty level could be slightly harder. Until I finished playing I did not get killed even once - I think I might not even get hit even once :).

Also I feel it is really loosely connected to the jam theme. :)

Thank you, this is actually really clever idea :). I have to think about it!

Fun concept but I think it could be executed slightly better, also in case of  the limitation, your game could follow it much strictly VERY easily - you have two variations of the character and the rest is really having just different colors. Colors could be easily changed using script.

The feedback on 'marking' cards as selected is very weak. Would be awesome if the cards turned and showed you at least for few seconds what you have selected. That would make the game slightly easier. With this amount of interests and dislikes it is really more about guessing or 'finding just one that matches'.

Maybe the interests and dislikes could be shown as small pictures? It's very subjective and I may not be right but it seems to me that it could be slightly easier to remember them with simple icons instead of full words text.

I really like the concept. However there are two things I did not understand:

1. Is there any penalty for throwing the unwanted pieces out?

2. I am not seeing any feedback if I am losing or winning. If the character is changing, does it mean I won?

This game would really benefit from music and sound :).

Once you update the tutorial I will be more than happy to try once again! :)