Hello Bruno, i think that what he is saying is that if you heal a PK player you will get PK too if you don't have it already. That way people would not stay healing without being able to get killed, other point that need to be fixed is allow people to heal from inside pz.

I agree with that. It's really unfair.

The clan castle's need to be pz locked after people PK.  People are abusing it.  And it's impossible to change clan in time.

I would like to propose a character information page.  As we know especially in pvp servers we all want know who killed who, players information, levels, guilds now that will be implemented

I think a simple page as it is in Rucoy or Tibia would do the job. The famous "killed by" on a dead body would be a plus too.

Following an example I took from Rucoy, it is very simple but have all information needed.

Let me know what you think. 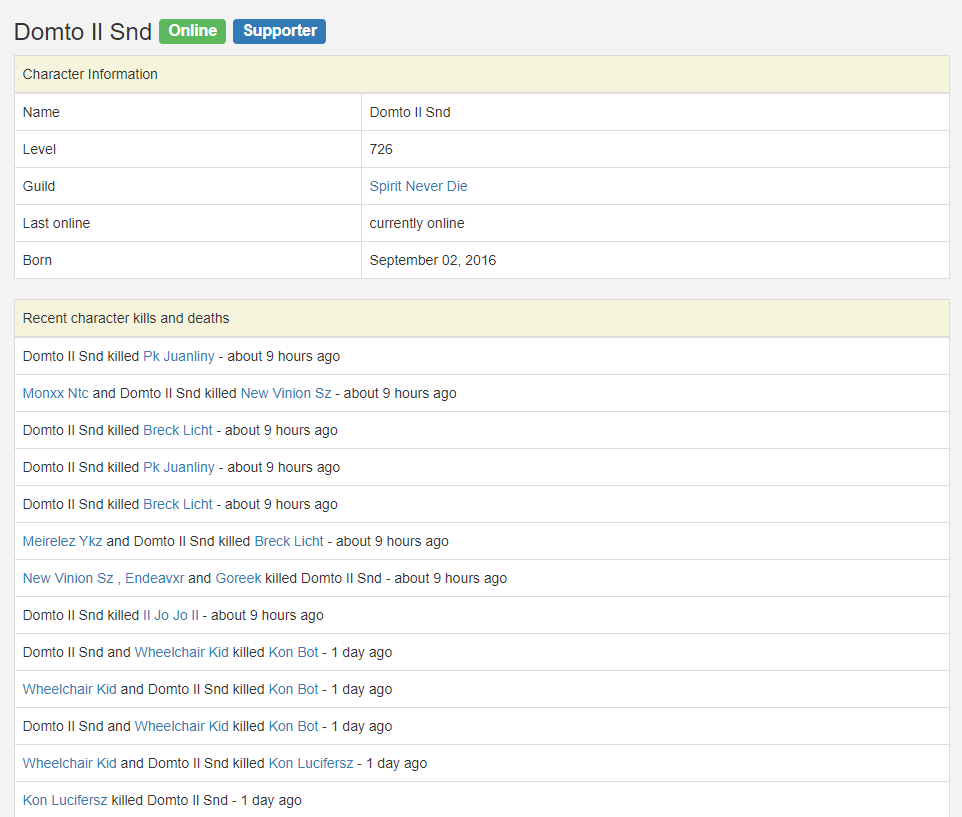 Reported it long time ago, but still no action was taken. No IP trace, No suspension, No Ban, etc.

Guild Gardens keeps getting used to people get away with pking, it would be nice if it was pz locked like dps. What do you think ?

I know Melo loves bones so why not allow us to feed him with the rare tasty corrupted bones ?  that way we have some use for it.

People are abusing the Stacking in pvp games, so I propose some changes to make it more fun to play:

Area spells will affect all the stack.

Direct attacks (melee, physical damage, non-area and magic attacks ) will only affect the one who is at the top of the stack.

The player on the top of the stack will be the one who was first on the tile.

Only the top player can use attack spells (area spells, strikes, waves, etc) or heal another player, everyone else in the stack will be only able to heal themselves  and to use his/her weapon.

This way will fix the abuse in pvp games where people stack and attack other players and you can't attack back because they use low levels in the stack making you get unjustified kills.

I would like to propose a way to reset the Upgrades from a equipment as we know that a lot of people end upgrading their gear wrongly, and sometimes it's an item from a quest and that makes impossible to get another one,  I think the blacksmith could charge a certain amount of gold to reset the gear, and to make people don't exploit it, you could double the price every time you reset the same item.

I would like to propose you guys to make the double hotkey bar a hunt/pvp bar. Where you can choose which one you want use, as we have too many skills to use that would be very useful.

Or you could make like it is on WOW, you have like hotkeys "pages" that you can scroll and chose the one you want use.  (This would be better for people that play at cellphones).

I see that the game is becoming more and more KKC focused.  I know that you need to profit but charging KKC to every single thing in the game will lower the customer retention  rate  lower then the 6% that already is.  If you take SA RED for example, we got around 50 players online / day where from that 50 players  around 30 are a 2nd our 3rd character from the same players.  Meaning that you have around 20-30 loyal players.

You need to realize that with the cellphone app game your biggest market is mostly simple people that can't/won't afford expending a lot of money in games. (that's why they are playing  a low graphic 2d game in 1st place.)

Following some points I think you should review :

- You are charging for the monthly  premium just one dollar less the Word of Warcraft that as we know have light years more content.

- Charge KKC for name colors change, it should be charged once for each color to unlock it.

- Charge KKC for outfits that premium accounts have access. If people already pay for premium why charge extra for outfits ? (This is for MOBAS)

- I read that you will charge KKC for the houses ? Another huge mistake that will just push players away.

- Regarding the Boost, as we all know already is way to expensive and for PVP servers who would buy a boost that would work on his enemies too?  The boost in PVP should be limited to the player or his Guild/Party.

- Discord. A lot of people uses Discord nowdays, why remove the channel ?  I know you need to have a moderator or something but then again you are charging close to WOW and other games so the least you must have is a close structure right ?  So that was another bad move.

- English content, forcing people to post on it,etc.  There again you need to focus on your customers and I'm pretty sure the biggest part doesn't speak english so why not have multilanguage contents, forums, etc ?

- Website content. Before focus on anything else I think you should focus on the webiste content it's too poor.  PVP players want to see who they kill, how they died, etc. The wiki is missing a lot of stuff.  How rare are the droops monsters drop, stuff like that.  Personal players pages like in Tibia.

- Show how the player was killed when we check his body. Everyone wants to put their names on their enemies body.

- The Double Hotkeys bar, make it in a way you can choose between them so you can have one for pvp and other for hunting.

- Forum outside the website, you should have at list a link for it and preferable a own forum not a external dev one.  You can see by the number of posts that most of the players doesn't even know about it.

- Hear the community before changes, as the community is not that big yet you should place polls, talk, hear what people think about changes before doing anything.

I will add more suggestions as I remember,

But keep in mind that you need to think what is better for game: High revenue and a small community or a lower revenue with a great community, because it looks like you are choosing the first one and that may leave the game to death.

Again I know that you need to earn money from the game but there is a lot different ways to do it.