Discover a darkness like no other. The world of Lifeless Beyond Death is a combination of Sci-Fi, Medieval Fantasy and Supernatural. Each character plays a huge part in the storyline, immerse yourself in an epic tale involving an ancient and long forgotten god purposely removed from the analogues of history and a princess of a fallen kingdom in a far distant future where history has in many ways reset itself within a new world built atop that of he old one. A Nekomirian adventurer, a Serious and ancient Crime Boss and many more characters. In this series you will bear witness to the rebirth of Umbara who is reborn as Makoto Masanori, having lived a normal life up until the age of about thirteen Makoto starts having memories not of his own and obtains dark and mysterious powers he never asked for. He soon learns that he is the reincarnation of Umbara and that his path is not an easy one, however his fate and that of this new world all depend greatly upon his choices and rather or not he can accept his past and who he is. Will he become a hero or a villain? LBD follows the story of multiple characters while keeping to one primary character's development as well.

Join my website for more amazing stories, all free to read.

If you'd like to support a new Author then you should consider buying my first ever book. Its being sold digitally on here for $15.
https://umbariumlibrarium.itch.io/lifeless-beyond-death-volume-1?fbclid=IwAR1nnF...

Alternatively you can buy a physical paper back copy at Lulu.com right now.

Soon a hard cover copy will be back up on the Barnes and Noble online store as well likely tomorrow or the day after.

Can this be used for commercial use?

Does this come with character sprites?

I'm looking for art I can use both in my games and maybe for a few novels can I use this for the cover art of a Written Novel?

I changed the look of the status bars and added player information to the side bar that updates when you do something like input your name, choose your gender or get a new potion, skill or spell. On the side bar is also Quest Updates for active quests, as an added note I've finally made the status bars fully functional. 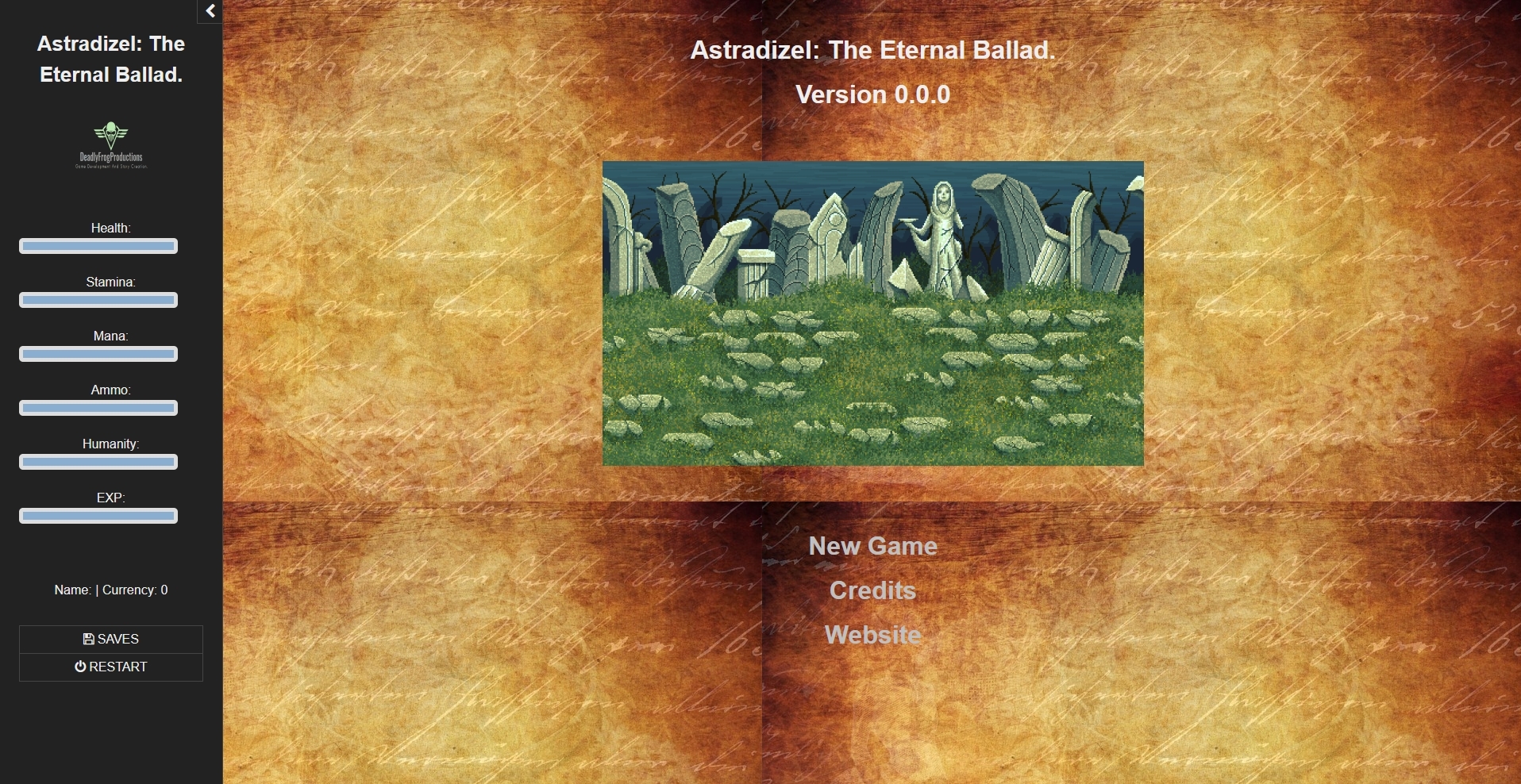 Hello and Greetings, I'm John E. McNemar III from DeadlyFrogProductions and I'm here this morning to showcase the UI of my Twine SugarCube game. Its a one man project currently and won't be ready to be released to the general public for a few weeks to a month at best and that'll just be in the form of a teaser demo. I hope to have more dialogue and player choices made by than, This is a project I just started the other day and has taken me a rather long time to figure things out and even now I'm not sure things are going to work the way I want them to yet. There is no set release date because I'm the only one working on this thing, and I still haven't decided if I'll sell it for $5 or host it on itch,io as a free to play game...its a hard choice, especially with as much time and effort as I'm putting into the project.

The game takes place in The Holy Year, 6A 106 and you play as someone who was caught up in a battle and left to die, suffering from grave wounds and a broken mind you nearly died that day, but fate would have it that a lone traveler would save you from your fate and nurse you back to health. You choose who you are and you live this new life as you see fit, your every action affecting the world around you. While there isn't a vast character creation system in place and you're forced to play as a human male or a human female I am aiming to make up for that with a large and expansive storyline. This game is part of an entire series of games I plan on making, most of them in RPG Maker MV...and this one is unique since you play as someone outside of the main cast of the series. You will have the chance to run into versions of the NPCs and enemies from Xephyr's story however.

Anyways, I mostly just wanted to showcase the UI and talk about my game a bit. I'll update this topic as often as I can with updates and hopefully soon I have a viable demo. One thing I'd really like to do is try to add voiced dialogue to this thing....though....I'd really need to figure out how that'd even be made possible.

See you all in the next devlog..