Love the atmosphere! Had me hooked for the few minutes it took to play through. Well done!

Delightful, bittersweet experience. Thank you for releasing this!

Although I suspect it wasn't supposed to be a metaphor for self-care, I think this game works very well as one! Great job. Loved the atmosphere.

Fantastic little game! For some reason, the font didn't show up right on my PC, but I was able to enjoy the dialogue regardless. I like how Stella commented on the re-used tileset elements in-universe, haha. Overall a delightful experience! Thank you for making it!

Powerful narrative; hits very close to home. I was diagnosed with JRA at Rae's age, over 15 years ago now, and it struck me how universal some aspects of juggling chronic illness and adolescence are no matter the diagnosis. I cried a lot more than I expected to—it was extremely cathartic. My most heartfelt thanks to your team for creating this game!

The flock of birds really made the visuals for me, but I appreciate the tone of the narrative most! Lovely! 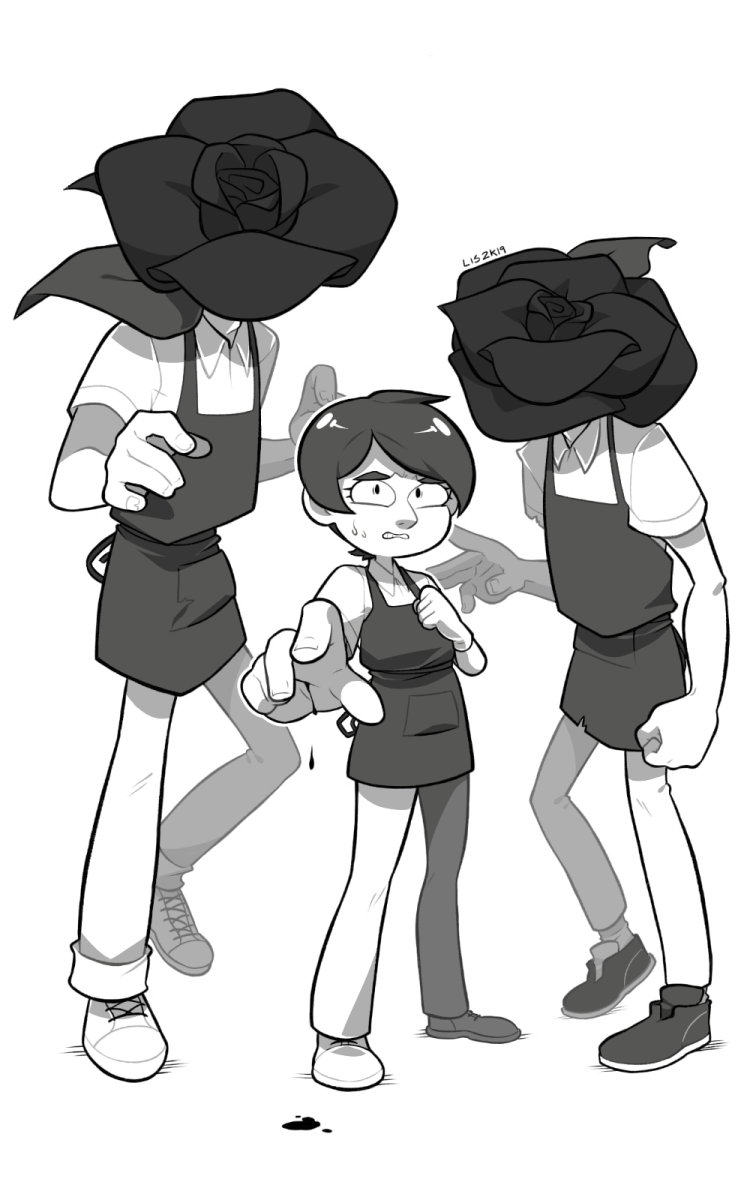 I loved this little pixel horror so much I drew you some fanart! I hope you enjoy it!

Beautiful. Teared up a touch at the end. :)

Alas, we shall never know the culprit...

Oh my god that left me feeling so warm and syrupy!!

This was adorable and surprisingly deep--thanks for the experience! Keep it up!

I am literally, IRL, laughing out loud at 1:30am with a bottle of Strawberries and Cream Baileys replaying this game over and over.

I'm so glad this exists. I'm so glad you exist. You just made my shitty week that much less garbo. Take care out there, don't stop making things!

This is extremely adorable

That... that made me very sad. Lovely game, though!

I couldn't bring myself to eat the tapirs, so I cannibalized that shithead, Bill.

This here's your official team-finding thread. Post your deets here and hope for the best!?

Hey, guys! Welcome aboard the official Spooky Scary Introduction Thread! Say hello to your newfound jam-mates and tell us what you're all about.  I'll start:

Name's Tuesday, and I've been dabbling with game dev on and off for the past couple years. I took a two-year hiatus to focus on school (I'm a soon-to-be ex-animation student) but I'm getting back in the - heh - game ASAP! I can't code worth beans, but I draw and write well enough. I'm not sure I'll have time to partake in my own jam, but I wanna try!

Thank you for partaking! I enjoyed this unique, intimate-feeling little zine. :)

This is an extremely charming little zine - thank you for participating! Love the photos!

great work so far! Keep it up, Jamarin

Hey there, welcome aboard! Lookin' good so far. I'm curious as to what'll come of this!

Ayy, so far so good! Love the aesthetic. It's very cute. Looking forward to what comes out of this!

This is very cool! Love the moving WIP shot, too. Best of luck! You're working so hard already!

You asked, and so you shall receive! I launched an Official Discord Channel (TM) for this game jam. Have fun, everybody, and be civil! :D

Ack! Let me make a Discord channel! I'm at college right now but I'll get on that ASAP!

It means three or more! Sorry I wasn't clear!

Yeah! :) I guess I should have said 'one small map RPG', but 'one room' sounded catchier...

'one room' as in one actual, navigable map :) battle screens and such don't count!

Voting for the sake of voting may be a thing in the future, who knows! :) Thanks for your feedback.

Reply
1-Room RPG Jam #2 community · Posted in What counts as an RPG?
Chusday2 years ago

Seems I've misused the word 'genre'! I'm going to keep the definition loose for the purposes of this jam. If there's a role-playing element, then it's an RPG. Don't stress too much and have fun within your (very minimal) constraints :D

Submit for the accomplishment. I don't have money to distribute prizes!

Reply
1-Room RPG Jam #2 community · Posted in Can I sell my game?
Chusday2 years ago

Sure thing! I look forward to whatever you come up with, paid or not!

Reply
1-Room RPG Jam #2 community · Posted in Can i use cutscenes?
Chusday2 years ago

You have full control over combat systems, etc. Cutscenes count, but you're only cheating yourself if your submission is 4 minutes of cinematics and one minute button-pushing! ;)

Reply
1-Room RPG Jam #2 community · Posted in Can i use RPG Maker?
Chusday2 years ago

Yeah, go for it!!! Looking forward to what you do!

Hey, I'm Tuesday! I've wanted to partake in YuriJam for a couple years now, but never got around to it. The wonderful Sunspider is offering her musical talents and coding prowess to this endeavour, while I stumble through the art and writing myself. :)

Be Minus is a romantic comedy about a slacker who harasses people into doing her homework, and the straight-A student whom she badgers essays from in a misguided attempt at flirting. Visually and tonally, Be Minus is inspired by anime such as Nichijou, Nobunaga no Shinobi, and Little Witch Academia.

A shy, studious girl with a talent for writing. Easily bribed into writing others' papers. Enjoys it so much that she doesn't really mind, though a certain someone's dependence on her efforts concerns her. Wishes she could be more outgoing and athletic... but not enough to make a proper effort.

An unrepentant slacker who gives somewhere in the ballpark of negative ten damns about her grades. Comes from a reasonably wealthy family, though you wouldn't know it by her rough'n'tumble demeanor. Crushing hard on Maple, whom she harasses every day on her way to school. 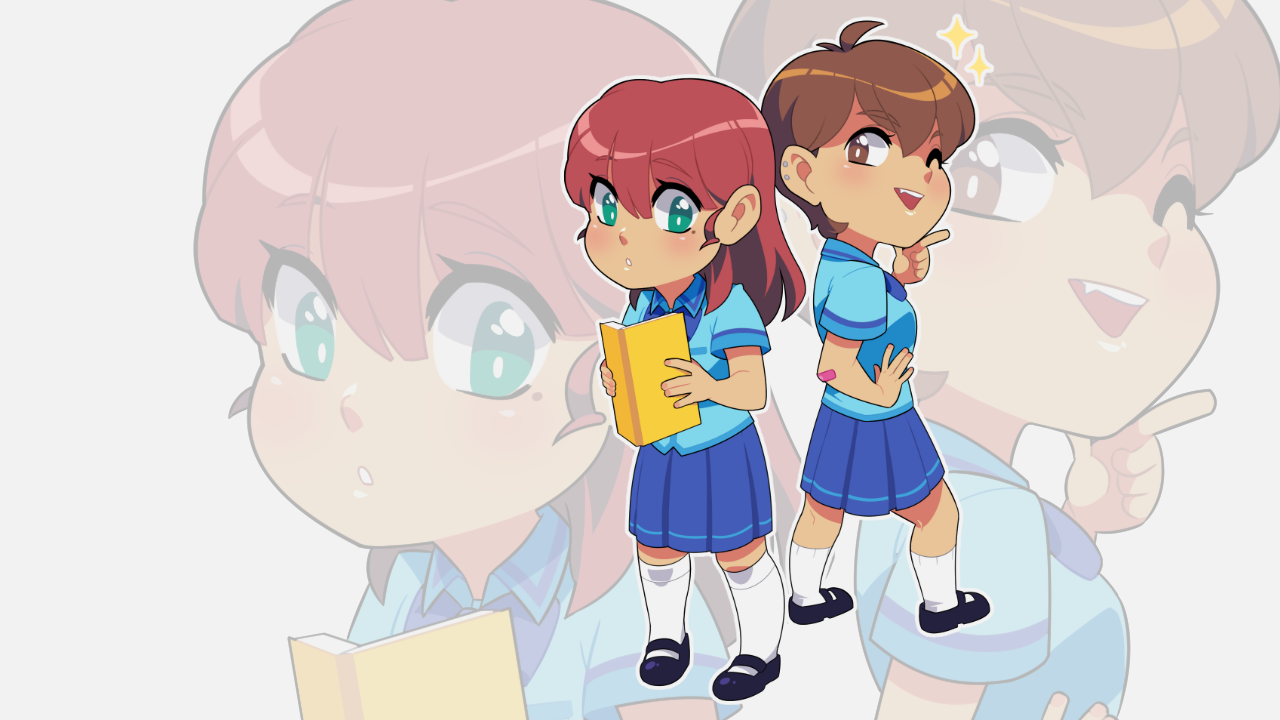 This is super cute, haha. I like the color choices as well.

Well, it's me again. I had to vanish when school swallowed me whole, but it's great to see so many nice games coming out of the jam!