Thanks so much and thanks for following since the devlog! I knew I wanted to try out a narrative driven game to test out my storytelling skills in a game, and what better topic to talk about then something I'm familiar with. Hopefully I can get back to this when I have the time and when I can fully figure out Cinemachine and the timeline for animating. Until then, thanks again, and good luck on your game too!

This was awesome! I always enjoy a good puzzle game, great work!

This was super fun! It kinda reminded me of Enter the Gungeon in a way, and I love that game! It just wasn't apparent that you could switch weapons with 1 2 and 3, but other then that, great job!

This would work excellent as a mobile game easily! Good job!

Good game! I can see a lot of potential for this game!

Great game! I can see this as a mobile idle game or something

Wow! This game is so good! The level design, the use of color to define the levels, the slight puzzle aspect, the story, the character designs, I loved it all! This game was a blast, I hope to see more of this after the jam!

This was a really fun and simple game! I can easily see this as mobile game, keep it up!

Thank you, I'm glad you enjoyed it! I'll check out your game soon!

Thanks so much! Yeah, once I heard the theme, I knew exactly what I wanted to make and I tried my best to make it happen. If I ever figure out the problems I'm having with Cinemachine and the Timeline, I'll deff finish it up. I'll check out your game soon as well!

This is a pretty kool game! I see a lot of potential for it, I hope it becomes something bigger in the future!

This was pretty fun! I like tower defense-like games and this was a good start with it. Good job!

My game is out just in time, check it out here!: https://trickster511.itch.io/the-hole-story

Hope everyone is doing great in the last 12 hours. I can't wait to see all your creations!!

Your reaction is understandable, they are a bit creepy, lol. But don't worry, there won't be any jumpscares in this game

That's actually EXACTLY what I'm doing! I only setup rigging for him so I can animate him later. And knowing me, I'll run into another problem that'll frustrate me, so I'll deff ask for help if I need it, thanks so much!

Hey everyone! I'm Dexter, and I'm so excited to try out another game jam!

Day 1: Holes. As soon as I hear the theme, in 5 minutes I knew exactly what I wanted to make. So I immediately got started on designing the character, which wasn't hard, they're just a black stick figure lol. I brought him into unity and I setup they're body parts for animation, which I wouldn't do yet until I got the movement script done. That was surprisingly difficult to do for some reason. It fustrated me to the point of just leaving that part til the next day. I felt bad for pretty much wasting a day, but I still have time to make this work. 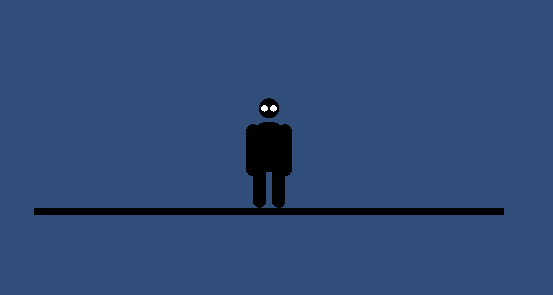 They're staring into your soul!!

Day 3: So I actually did some more stuff on day 2. I pretty much finished the dialogue system (complete with choices!). Today, I just took a break mostly. I did setup powerups, but didn't actually make them. So next day, I'll work on powerups and some artwork like character portraits for the dialogue. Hope my break doesn't screw me over in the end

Day 4: Finished up the powerups! Well, mostly, and I got all if not most of the level design done! Which means I can focus all on the next day to work on animations, art and actual dialogue! Let's get this done!!

Day 5: HOOOOO, BOI! I did ALOT this day! I managed to stream my progress and make a lot of art for the game. Since I can't show all of it for spoiler reason, I've only got a screenshot for you today. I still need to do animations and scene animations, which to be frank is scaring me right now, because I never really did any complicated animations in Unity before, but I just  have to dive in and do it cause I'm running out of time! But I'm almost done!! Let's goooooooo, full force!

Day 6: I'm exhausted. I've spent soooo much time trying to figure out how Cinemachine works with the timeline. I've tried tutorials, I've tried so much experimentation, but the timeline is going against me in Every, Single, Step. I'm done trying to make scenes. I'm just gunna work on the dialogue for the last day and then I'll submit it. It's a broken mess that I don't know how to fix and honestly after this, I'm gunna step away from it for a few days, I need a break from it.

Anyways, hope everyone else made something great and had a good time, can't wait to see what everyone made.

Day 7: And it's out to play! Check it out right here: https://trickster511.itch.io/the-hole-story

Just a slight glitch in the overworld in Demo_03_2: