The Haus Of Skin

Thank you ! I made a "full" version with lots of corrections and new content, but never published it... Maybe I should do it someday..

Yeaaah, this game is so cute I loved it ! I somehow got better each time, the first one hated me, the second one doesn't liked me, the last one loved me. Love the randomness factor !

It's the first day of the Rainbow Game Jam, and I began working on my game. I don't have a name for it right now, but have some ideas. It will be some kind of a simulation game based in space (as often with me).

It will feature a simple online feature wich I developed today, as you can see on the gif bellow :

I basically added all the mechanism wich give information to the player on the process of the connection between the database (where some messages will be stored) and the game. It works exactly how I want it to (so when the player launch the game, it takes some messages and store it in a custom class in a script, and when the player send a message online, it is stored in a database just as it should.

That's what I've worked on today (while respecting a quota of hour spent in the developpment of the game, by taking long breaks). This is clearly not the main mechanic of the game, but I wanted it done right now, so the "difficult" stuff is now done. I only need to find somewhere where I can host my scripts and my database (if you have some recomandation of hosting servicces - preferably free -, I'll take it).

Tomorrow i'll probably work more on the main mechanics of the game. I'll try to finish them this week, so I can focus on the polishing of the game next week !

You'r welcome ! Did you plan any post-jam version ? I would love this game on my phone with random levels (sellected on a list of pre-made levels or procedurally generated don't know)...!

I like this game soo much the graphisms are so cuuuuteeee

Oh my god, i love this game, it is so good and polished, and the art still is really cool ! Also i loved how this game tells its litle story, and how i can somehow relate to it (since i'm a bit like the creator -  you -, not finishing any game for the reseons depicted (or some art pieces since i'm an art student).

I played your games before (and I do believe you've done something for the ludum dare 39 but i can't remember what, and i'm a bit unsure now...), and I will certainly play them again later. But for now i'm willing to see what you will do for this next ludum dare ! :D 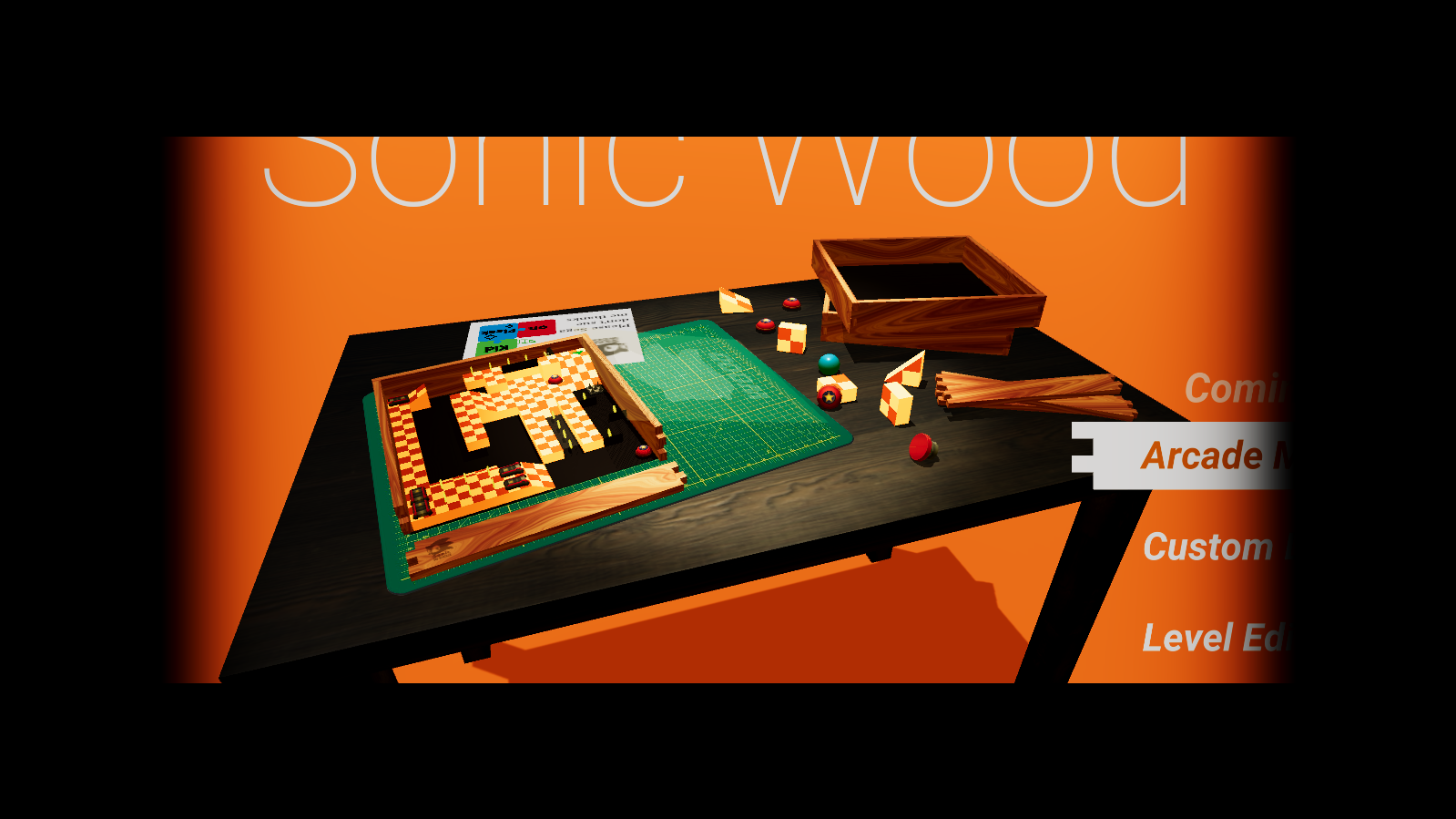 Thank you so much ♥ Sorry for the grammartical mistakes, since I'm french I'm not really good at speaking english (but i'm improving my skills every days ! :) )

Have a good day ♥

This game is super hard, I'm unable to go over 9 colors collected. But I think this is what makes the game fun AND, most important, strong. I think I got the symbolic of that and I loved this game for that.

This game was pretty cool - with a cute ambiance (like a dreeammm ♥), and the art combined with the music maked it powerful. I also like the mechanic where you switch between two "worlds" or two visions of the world, that was interesting !

I think a tutorial could have helped me a lot understanding what's the goal of the game (and how to use the heart / strawberries cursor). Also the fact that I should right click a multiple time on the squares / rounds was a bit annoying -  However after that the game was fun with a soft music ! :)

Thank you for your feebdack ! I'm going to look about this bug and correct it :)

I liked how to managed to express how random our "creation" is and how normal we are - born this way -.  Powerful game !

That was a great game, however I'd wish that "w" was used as a "jump" button instead of space (it's a bit more common I think ?), and see more abilities. It was a short game but a fun one ! :)

Wow I love this game, the sounds, everything ! Excellent use of the theme by the way ! :)

The game is pretty good ! I loved the art and the music, it created a good ambiance !

Yup I think putting hints in the screenshots could be a good idea ! :)

This game is awesome ! Some puzzles are bit to beat but still good :)

Cute game with a great objective and mesage ! :)

Wow this game is awesome ! Love the art, the music, this is realy cool. There is some "enigma" pretty good but sometime I got stuck in the wall trying to resolve them... :( (not a big problem however)

Wow, such a great game ! Their is a lot of building (considering it's a game made in two weeks) and it was fun trying to construct a city ! :D Also their is great art (with flashy colours hehehe) and the sound is super cool ! :)

Ooooh thank you so much ♥

I played this game one day ago and I liked it. It was ingenious to make a game where you can make things colored like a LGBTQ+ pride flag. I just wish that there is more "shadow" to the models so we could see the models in details :)

Great game with cool dialogues, I liked to hear about everyone's story and the positive vibes this game send to whoever play it. :)

A lil' update because the game is now playable here : https://hishicorne.itch.io/meadowofopal

Day 5 : give me some sleep please

What have been done today :
What for tomorrow 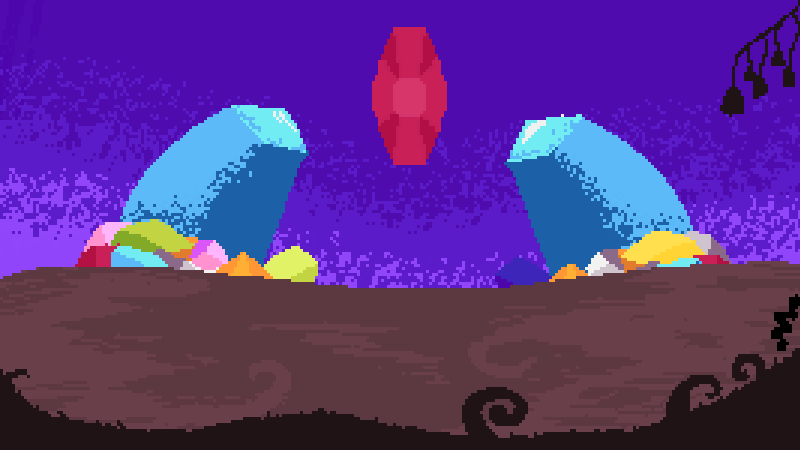 One of the place you'll have to visit : the Diamonds Meadow. Such a good place for fighting ugly monsters trying to [spoiler canceled]

The game looks now a lot more polished ! Tomorrow, I will have to :

And, after that, I may consider adding sounds and songs to the game ! ♥

Oh, and now the game have a title : 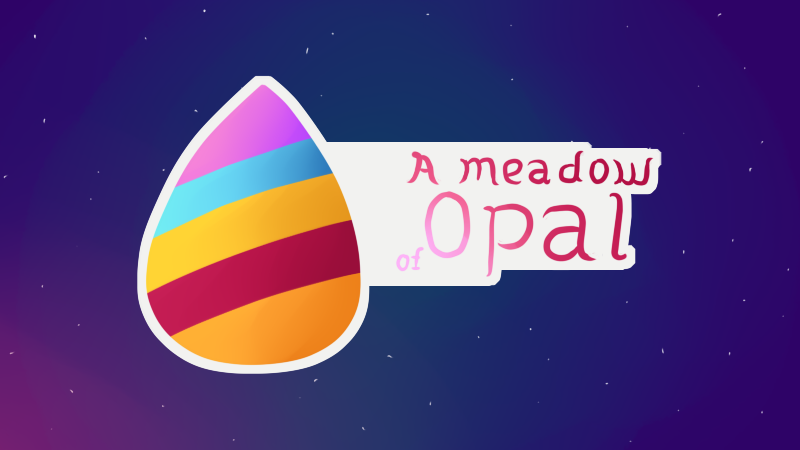 Do you recognize the flag ?

It looks amazing ! And the lightning system... Can't wait to try this out ! (I promised to check the demo today but haven't did it yet - shame on me :( )

Day 3 : Small progress but neard to the end of the programmation !

As you may be able to see, quests are now available and completable, wich means the game is now considered as "fun" (by myself only welp). I've also added a map system (the "move" action wich i've never shown in any screenshot), and I just begun to draw the assets for the game. So ; what's next now ?

Haha yep, I work fast when I'm motivated but the code is pretty messy...

So yeah I worked all the day and I've done big progress, despite the fact unity acts soooooo weirdly whatever I do ! Here's a progress gif :

I'm sooo happy with what I did :

Also, I have a cool game controller and all of that, so I begin to se the end of the programtion, i'll be able to work on graphics soon ! What I should do tomorrow :

Also : i figured that I was a bit in advance - the whole dialogue and scene system should have been created tomorrow and not today !! So tomorrow i'll be able to make more maybe.

Oooh this looks great ! I love ow it looks like, hands are very cute !

Day one : the begining

So, I'm begining to work in this jam... 10 days after the begining ; BUT I still have plenty of time. So I decided to make a little rpg with point and click feature combined with a turn based combat system (a bit like Final Fantasy and Pokemon), with 6 differents status conditions (that should work, not tested but implemented). I began to wrote the script for the combat system at 8PM - it is now 11:33PM here. And I think I have done about the 3/4 of what I should do for the combat system (it represents 469 lines !!). So, I'm happy with it. 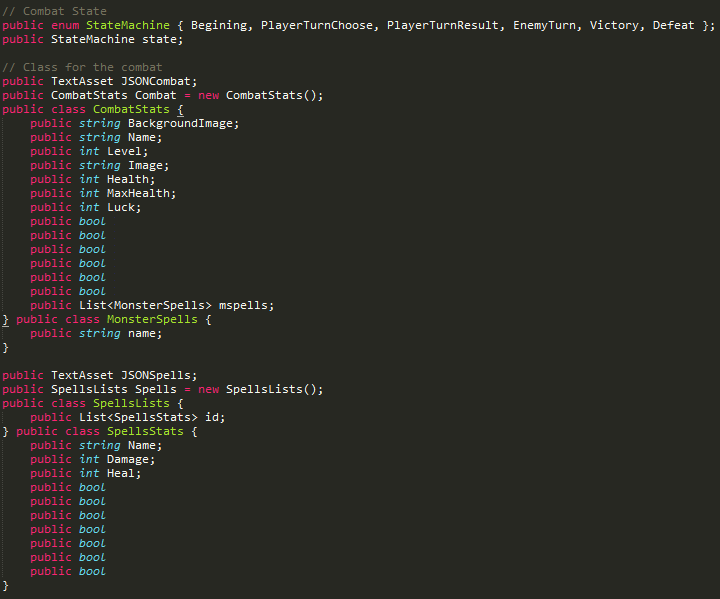 (A part of the script, censored so you can't see wich status condition I've included - but they are very common  - not a big deal)

I'll be using litJSON will permits me to play with json files easily. Also, every fight will be a one vs one fighting, so I have no need to have another class for every enemy. The CombatStats class contain everything I need. I'm going to bed soon, so I know what I have to do tomorrow :

That's everything for today - hope tomorrow i'll have more to show. Until this, good luck everyone and have a hug !!!

(PS : Please, excuse me for my very bad english. I'm a bit tired so it must be worst than at usual...)