It's for substance painter.

I'm very glad you do! You'll be excited to know that I'm currently working on texture packing, so each unique texture will no longer be a separate draw call! It's already working on floor and ceiling textures! :P Once the walls and floor are implemented, there should be some dramatic frame rate boosts!

Oh this is going to be useful! =D

Deimos was the original branding of the project. Haha. I appreciate your support! Right now life is a bit messy so game dev has been a bit slow. I'm close to having a playable demo to put out into the world!

Thank you very much! I'm pretty excited with the progress considering how little time I typically have to devote to working on this.

After loading my directory, I press start and the application acts like it's thinking, but then I never get a "done" notification from it so I'm not sure if it's actually doing anything.

Whenever I minimize the window, then restore it MasterPlan freezes up and crashes. 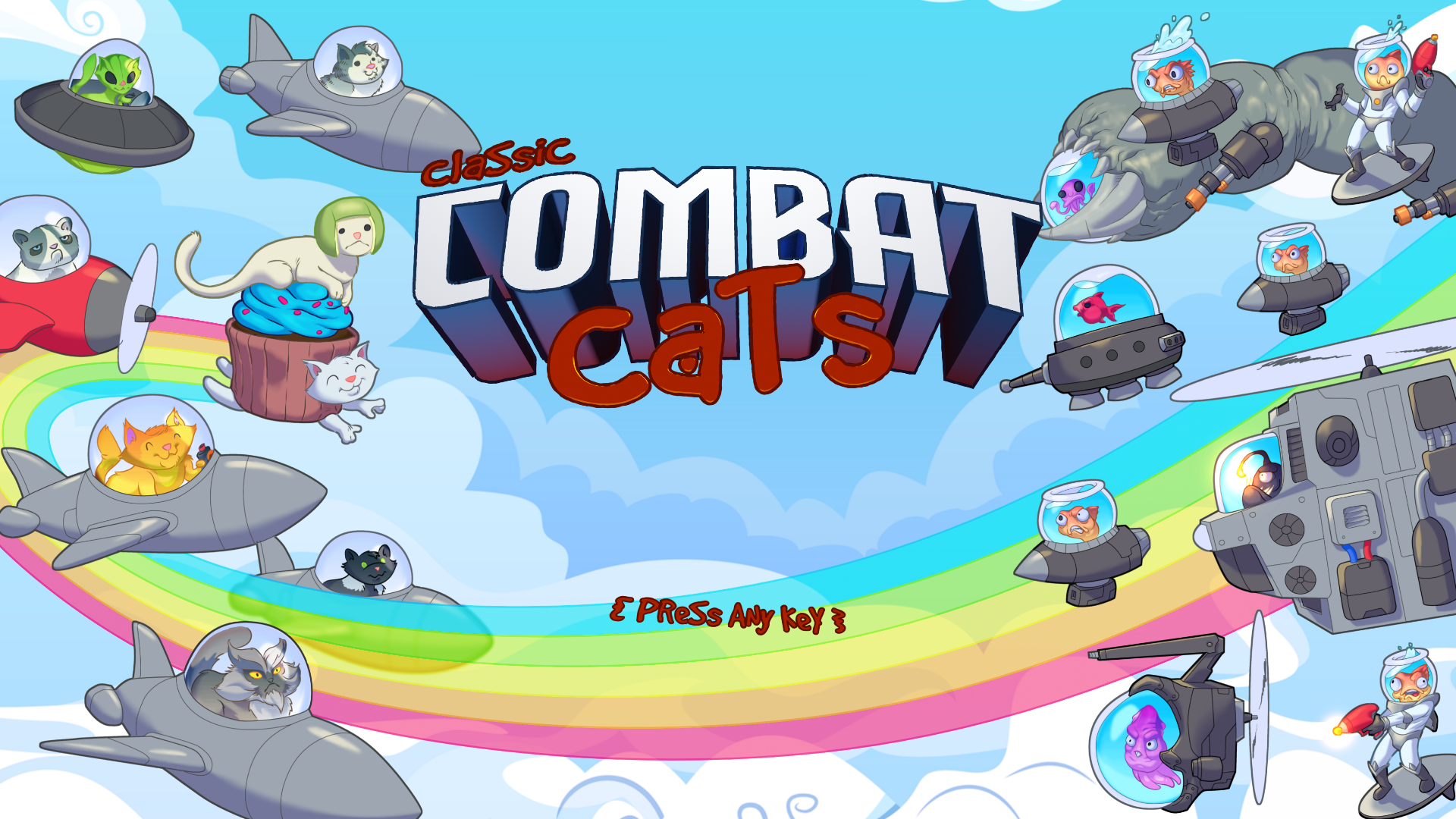 Combat Cats is a tile-matching game with unique combat aspects that add RPG and adventure elements. Kitty Island is in shambles. This once purrfect paradise is now without an ounce of catnip. You, a member of the Kitty Island Homeland Security's veteran Ace Fighter Pilots, are the last hope to return peace and harmony.

I will have the pack updated shortly with the missing asset

That is my exact goal for this. There are so many tools out there for crafting incredible maps that are highly interactive. Having support for these features in GMS just might make it a little less scary for people to dip their toes into crafting 3D content!

With the Wad Lab beta release looming ever closer, I felt it was a great time to share some vital information to prepare you for playing around with some DopeFish goodness.

First thing's first, what is the Wad Lab, and how does it differ from DopeFish?

Wad Lab is sort of a testbed, it is powered by the DopeFish engine, but it is NOT the DopeFish engine. Instead this tool gives you the ability to test out new features of the engine on your own wads, given that you follow the proper protocol. And don't worry, this will get easier as the engine gains more features!

How can you use the Wad Lab with your own wads? Well there are a few important rules to follow. Currently DopeFish only works correctly wads that have been processed by supported Node Builders. Currently the only supported node builder is GLBSP. Luckily Wad Lab comes with GLBSP included, and instructions on how to use it! In the future more node builders will be supported, and DopeFish may even come with one built in, leaving less for you to worry about!

Let's look at the UI! 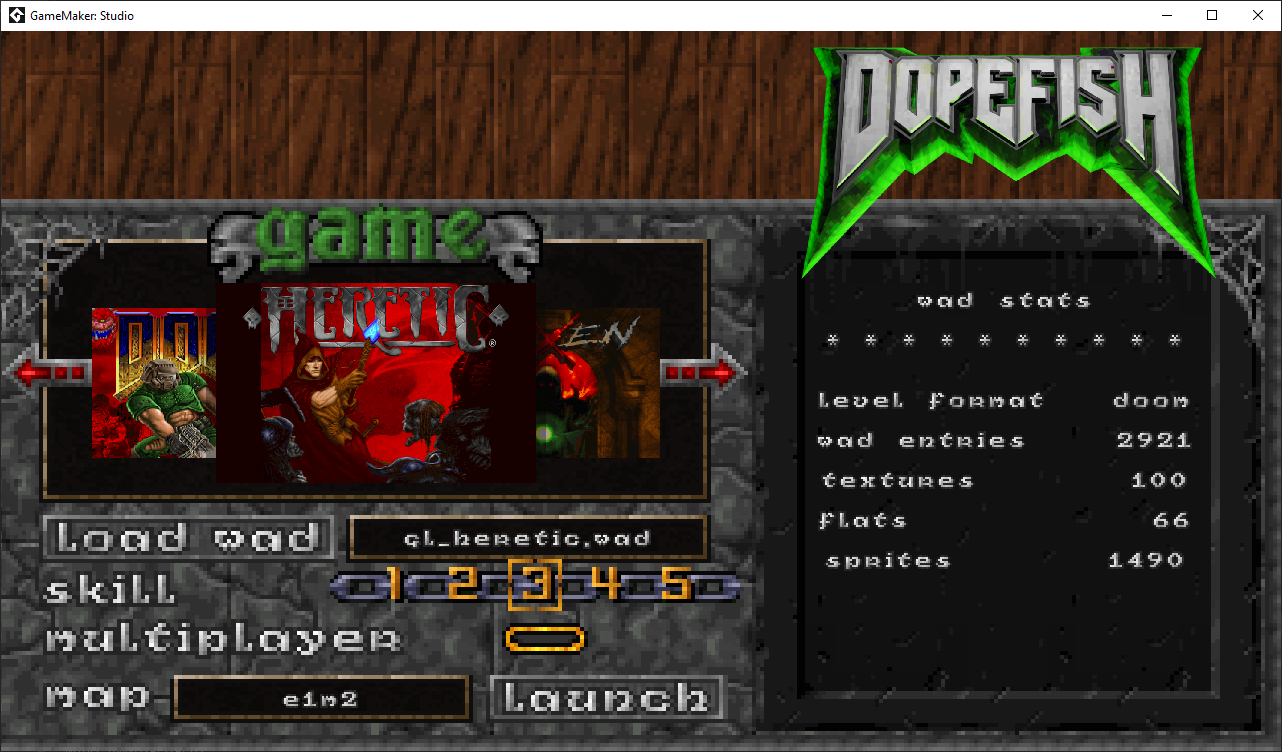 You'll notice a readout on the right side of the screen, this will tells you various bits of information gleamed from the wad that you have loaded. It will also display any warnings, such as if there's no wad currently loaded, or if the wad is of an unsupported format.

On the left side of the screen you'll see our game window. This is here for a very important reason. Wad files contain sprites that are specific to a certain game. Each of the available games here contain their own database, however entries from a database in the game Heretic may be referenced using the same ID as some entry from the game Doom. So knowing which database to check is very important, and unfortunately, wads do not have any information stored in them that can tell the system what game they are for. Therefore the user must decide that.

Under the game window are your configuration settings. Load wad is self explanatory, but skill and multiplayer may be a bit confusing if you're not used to working with the wad format. See, items and creatures on a map can be assigned certain tags, such as skill number, or multiplayer. What these do is tell the game that will be loading the map that these entities should only be spawned if the game settings match the assigned tags. So if you set the Skill to 3, then only entities that are meant for a level difficulty of three or lower will be added to the map. Add thusly, toggling the multiplayer switch to the on position will tell the Wad Lab to load any entities on the map that are tagged for multiplayer.

And finally we have the map setting, and launch. It's pretty apparent what map does, simply typing in the name of a map in the wad will tell the game which level to transport you to when you click launch. However if you're not aware, in traditional wads, there are two ways a map can be named, ExNy, where x represents an episode or chapter, and y represents what map number in that episode or chapter. Such as E2M4 will take you to Episode 2, Map 4. And then there is the MAPxx format, where xx represents a any two digit number, traditionally from 01-32 or higher in some cases.

How will you know which naming convention to use? Well when you're designing your own levels you can choose whichever feels the best for you. However when loading from any of the wads that the Wad Lab ships with, the following rules will apply:

Freedoom, Doom, and Heretic all use the ExMy format.

Freedoom 2, Doom 2, and Hexen all use the MAPxx format.

Once you've entered in all of your configuration settings you're ready to play. Just hit the launch button and let the system load. If your wad isn't broken and you've chosen a valid map name you will be transported into a fantastical new world of pixelated and low poly goodness. The controls in this world are very simple, "WASD" to move around, "Space" to jump, and press "F" to pay re.... to interact with doors and switches. Pressing the "Enter" key will unlock the mouse from the screen and pressing the "Esc" key will terminate the program freeing you to go about your business. That's really about all there is to know about the Wad Lab! The first release is coming very soon, but keep in mind this is all a work in progress, and that you will be playing with the Wad Lab at your own risk. The frame rates will be abysmal in some levels until further features are implemented into the DopeFish render pipeline. Things may even crash or make really abrupt and startling noises! That's okay, It's all being worked on! ( by one guy, give me a break man! :P )

Thank you Gadyka, you've definitely given me some things to consider! :P

Yes commercial use is allowed. :) And once development on the main engine completes, there's a possibility that I'll work on some expansion modules to allow for things like AI and weapons.

There are two types of WADs: IWADs (internal WADs) and PWADs (patch WADs). IWADs contain the data necessary to load the game, while PWADs contain additional data, such as new character sprites, as necessary for custom levels."


2. Is this a source port, and are you going to make the game fully playable?

3. Why isn't this free, aren't source ports supposed to be free?

4. What are the drawbacks from using a system like this versus modelling my level geometry in something like Blender or Maya?

5. Are you going to add stuff like sloped floors and overhangs?

A lot of you are probably asking yourselves, "Self, why would I want to load maps from some other game into my own game?"

The answer to that question is simple. You wouldn't. Copyright laws wouldn't let you sell your game if it contained content copyrighted by someone else.

So how then is DopeFish useful for you?

Imagine setting up a 3D scene in game maker without using any assets. You have to create vertex buffers to represent your 3d models, each polygon of your model is made up of 3 vertices, each getting roughly a single line of code to add to your buffer. For a simple 3 sided pyramid you're looking at a minimum of 11 lines of code just to build the mode.

Now imagine what it would take to create a complex 3D level using that same method. I would just die, that's more work than it's even worth when compared to how easily one can display complexe 3D scenes in, say, Unity, or UE4.

Complex geometric shapes like these can be created with a few simple clicks. Assigning textures and placing objects into the scene is just as easy. You can even change environmental settings like light level by just using the mouse wheel. Imagine if you could load that level you just made into Game Maker with just a couple of lines of code and it would JUST WORK.

This is the goal of the DopeFish to put the power of the easiest and fastest level building workflow into the hands of Game Maker users. Complex events like triggering a door to open when flipping a switch on the opposite end of the map, or stepping into a new room only to cause the ceiling to come crushing down on top of you are not only possible, but so easy that you don't even have to program them into your game. The map importer will handle those events for you!

Imagine not having your sprite resources filled with hundreds of textures. Instead DF can load those straight from the wad file itself, decluttering your resource tree.

Importing your own textures and sprites into a wad file is pretty simple using an app like Slade: Loading your assets from the wad file instead of adding them into your resource tree means that you can expand the content of your games without having to rebuild your source code.

DF aims to be the easiest way to create 3D environments in Game Maker with a retro aesthetic.

Hopefully this post has helped to shed some light for those of you who may be wondering what this thing is all about. If you have any further questions please feel free to leave a comment below. Or check out the FAQ here in the DopeFish Community!

Hey guys, I released another pack: 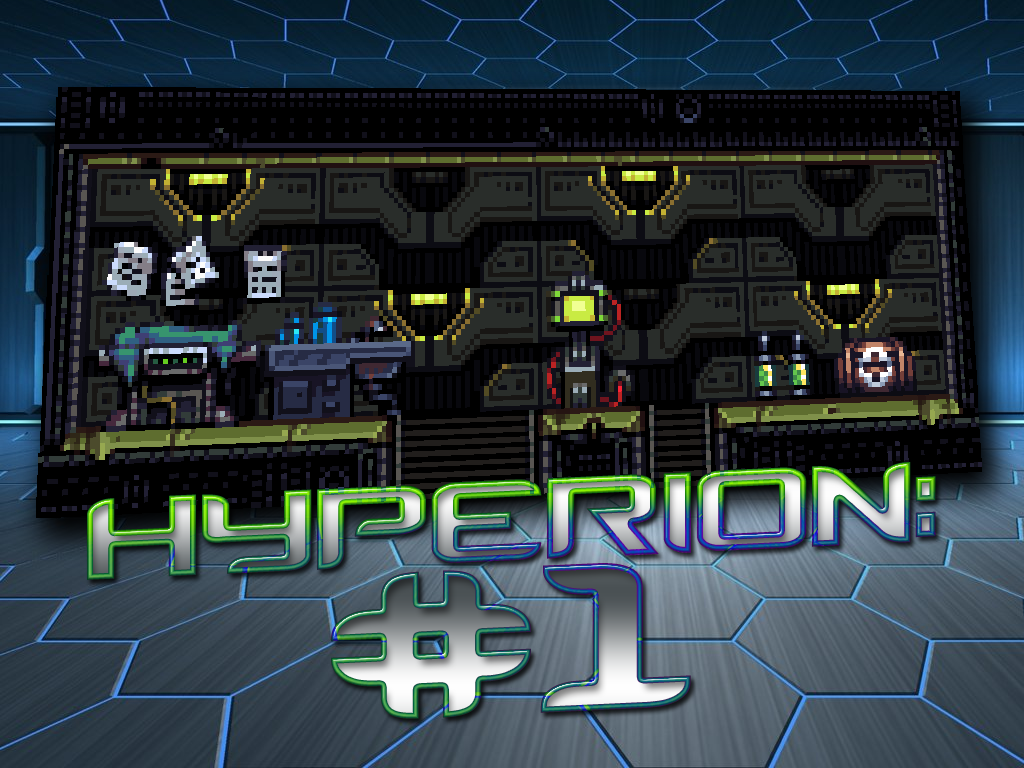 I'd love your feedback on the assets themselves, and their prices. I've been developing games for a long time but haven't released any public assets for some time so hopefully I'm doing it right! :P