Bail: The Bounty Hunter
In his world, if you don't show up for your trial then your next of kin carries out your sentence in your place.
SJWebster
Role Playing

Thanks for your feedback and sorry for not replying sooner. In hindsight, I should have prioritised making proper battle backgrounds rather than just having the normal map in the background. For Demand Surrender, I wanted it to work on remaining enemy MP, kind of like a Pokémon deal - the lower the remaining MP the better your chances - and display the remaining enemy MP by retooling Yanfly's visual HP bars but this wasn't ready in time for the contest so I opted to instead make it purely chance based to just show the intent behind the skill. These are both things I can work on for future releases :)

Thanks for the list! Can get some really valuable feedback from their comments and experiences! :D

I think the idea is really quirky, and I think there's a lot of charm here. I'm not entirely convinced by the execution.

This feels like a game the right person could lose months of their lives to. Anyone who loves Animal Crossing, Harvest Moon, Stardew Valley, or maybe even Monster Rancher to an extent will fall in love with this. I think my main problem is I'm not really one for those games either. Just a case of not my thing.

Graphically, there's a really nice cohesion. Everything's very vibrant and colourful. All of the assets look like they blong together. I particularly love the windowskin. Little touches like text boxes appearing by the person speaking is something I've always liked to see since my first playthrough of Final Fantasy IX. The font is a perfect match for the tone of the game while retaining legibility.

The presentation is let down by the mugshots, I'd honestly like to see them redrawn. They currently give off a vibe of 13 year old making an honest attempt to learn to draw, that might even be the case for all I know. The title screen is also crying out for a graphic designer.

Overall, while it didn't match my personal tastes, I think what you've made here is a solid foundation and I'd be interested in seeing you build upon it. Good job.

This is the date RPG Maker MV updated to v1.6.1. Like Colin said, when building MV copies the engine files rather than creating new ones. https://forums.rpgmakerweb.com/index.php?threads/rpg-maker-mv-v1-6-1-stable-rele...

Thank you so much! Absolutely take the battle screen on board, I think when I continue to develop this as a full game adding battle backgrounds is going to be a priority. I also take your point that some of the maps don't naturally lead the player to where they need to go and I should rethink their layout. Heck yeah, sassy granny, she was my play tester's favourite too!

I mentioned this in another thread but I don't really think the popular people are pre-determined to win the People's Choice prize.

Last year's winner was Team Tailnut with Quidget: The Wonder Weiner (https://teamtailnut.itch.io/quidget). They've returned this year with Pigglet in Mrs Big Bad Werewolf (https://teamtailnut.itch.io/pigglet2igmc). They also have a Patreon where 372 people give them a total of $4,117 per month (https://www.patreon.com/peninja). You'd think that'd make them unbeatable from the perspective of a completely unknown newcomer but they're currently sitting at just 28 ratings (https://itch.io/jam/igmc2018/rate/336807). I'd also like to add that they started with 0 followers and 0 patrons, just like the rest of us, so they've earned that following through hard work and dedication.

Meanwhile, I'm a nobody to the RPG Maker and indie game making scenes but my entry, Bail: the Bounty Hunter, already has 5 ratings (https://itch.io/jam/igmc2018/rate/335497). In fact, if you check the 'games in need of ratings' link, you'll see the absolute lowest number of ratings for any entry so far is 3 ratings (https://itch.io/jam/igmc2018/unrated).

It's actually a much more even playing field than you might think.

Reply
Indie Game Making Contest 2018 community » General · Posted in Curious how the Peoples Choice vote works when some games are front paged and some are not.
SJWebster1 year ago (1 edit)

I disagree. Last year's winners returned with Pigglet in Mrs Big Bad Werewolf and right now they're on 25 ratings. It's not a huge gulf and that seems easily achievable.

You also need to remember games are being rated out of 5 so no doubt the average and median rating will have some kind of bearing on the outcome.

If anything, people who are well known might have established fan bases (that they've likely spent years building) but they also have a target painted on their backs and could fall victim to trolls 1 star rating them. There are pros and cons.

In terms of the front page, Itchio seems to tailor the recommendations and such based on your browsing history so seeing as you're participating in the contest it's not surprising it's showing you jam entries.

I will say every time I view the jam all of the entries are in a randomised order and I keep spotting new entries I hadn't seen before.

It's all still to play for! :D

Thanks, think it managed to capture that Mega Drive era vibe nicely :D Cheers for playing it and I'm glad you had fun with it ^^

I noticed the main page lists 1st, 2nd, and 3rd place winners for last year's categories so I wondered if there were prizes for 2nd and 3rd place?

Thanks, glad you enjoyed it! However the contest plays out, I'd like to carry on working on this as a full fat game for a proper release down the line so keep your eyes peeled :D

For those curious, I've posted a forum thread in the Indie Game Making Contest 2018's Community that talks about the creative decison making behind-the-scenes! https://itch.io/t/345964/bail-the-bounty-hunter

Apologies this topic is being created after the fact but I wasn't familiar with Itchio or the Community tab before. I'd like to talk to you all about Bail, the thought process behind it, how it was made, etc. 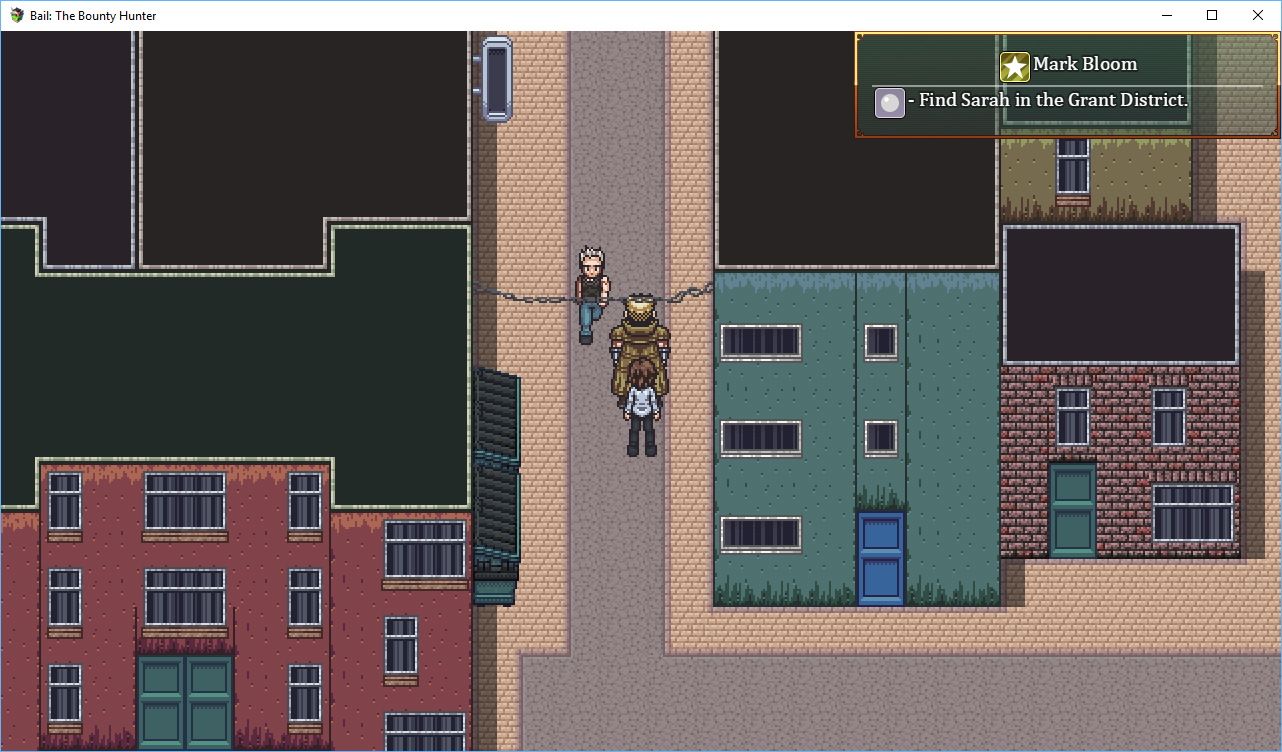 Bail the Bounty Hunter's set in a world where if you're accused of a crime and don't turn up for your trial, your next of kin has to face your sentence instead. This means you could end up going to prison for a crime your dad committed. You play as Bail, a bounty hunter whose main focus is making sure that doesn't happen. If someone's a no-show, Bail has 48 hours to bring them in and save their son / daughter / wife / husband / niece / nephew / brother / sister / you-get-the-idea. 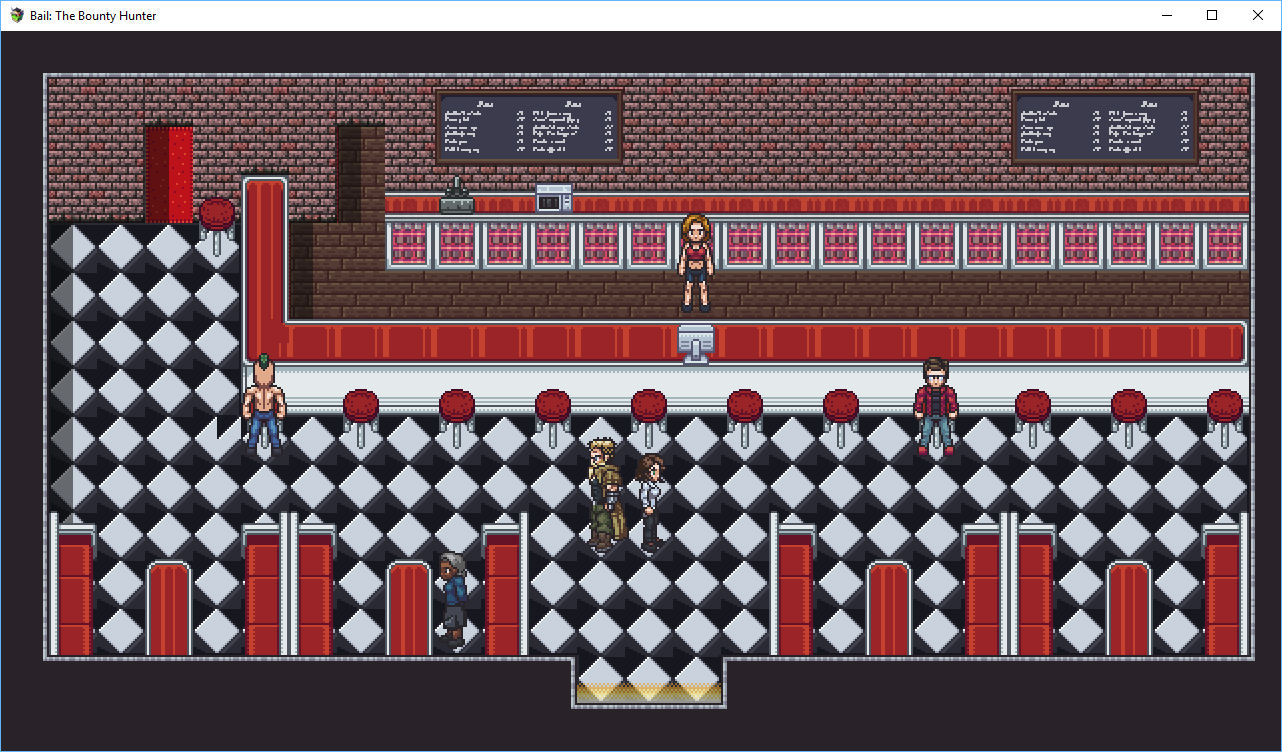 Bail
A no-nonsense bounty hunter who's getting on a bit in the years and isn't afraid to bend a few rules to get the job done. Bail's got a very direct approach and is more than happy when negotiuations break down and fists start flying.

Jennifer
She works for the Bounty Hunter Conduct Society (BHCS) and conducts annual reviews by observing bounty hunters out in the field. She's conducting Bail's annual assessment and will decide whether to renew his bounty hunting license or not. Being a representative from the BHCS, she's very by the books so expect her and Bail's personalities to clash! 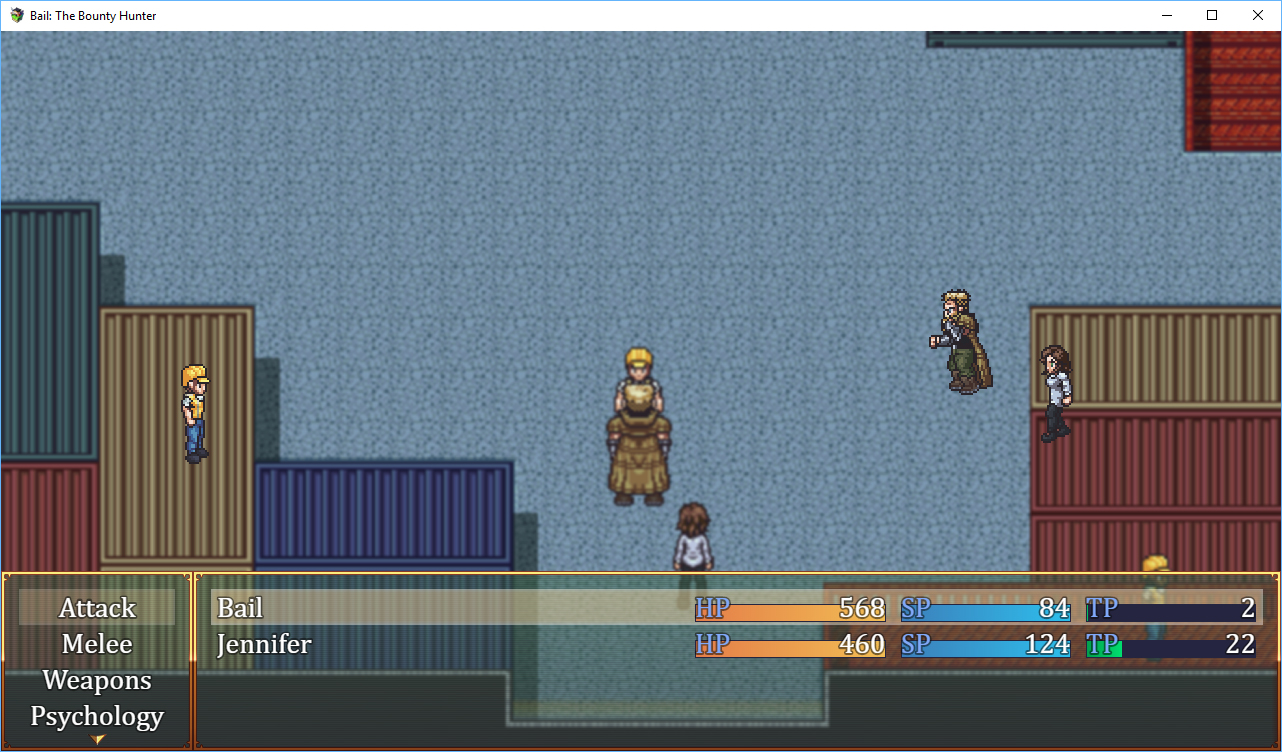 I think it's important to talk about how the contest and its rules affected the creative decisions for this project. Now, I know that could sound like a negative but I've actually found having a set and clear brief to be extremely helpful in defining the scope and content of the game.

In summary, the judges seemed to want:

I also had a few things to consider myself:

That caused me to make the following decisions:

If I were to win any of the prize pools, I'd probably use the money to take my wife on honeymoon as we've not had one. I'd also be interested in continuing work on the game for a full commercial release regardless of whether I win or not. Making indie comics and indie games have been on my bucket list since I was 5 or 6 years old, I've published several comics but not a video game so I'm keen to achieve that lifelong goal!

I hope that's given you some insight into who I am, please feel free to download the game, give it a try, rate it, and let me know your feedback.

I think the reason there are three prize pools is because a People's Vote can turn into a popularity contest at times. I also do indie comics and when awards, contests, or Kickstarter seasons roll around, people who have these massive pre-existing followings (which, fair enough, they've had to build up in the first place) just dominate. People blindly put their vote in for their favourite person out of a sense of loyalty and it quickly stops being a qualitative assessment.

Sadly, the only recourse is often to fight fire with fire. Tell your friends, family, Twitter, Instagram, etc followers that you've entered, ask them to give the game a try and, if they like it, give it a rating. I think that's the key thing, asking them rather than telling them. In the comics world I've seen some shady tactics where they've said "Oh, vote for my comic, send me the proof, and I'll ping you a free copy of this other comic I made!" or offering a free sketch or what-have-you.

Fingers crossed, everyone plays a clean game here. That said, there are already some entries that'll get disqualified for breaking "Development on contest entries MUST be started after the beginning of the contest (October 29th, 2018)." (mostly games that seem to have been submitted for multiple jams scattershot without thought to the rules or relevance of each jam rather than games that were tailor-made specifically for this jam).

Time will tell. For now we have to trust the team behind the contest and let them do their jobs. :)

Reply
Indie Game Making Contest 2018 community » General · Posted in I submitted before the deadline, why is my entry not listed?
SJWebster1 year ago

You might just get pointed to contest rule 2 and be out of luck:
"Games MUST be submitted by the deadline (Midnight PST, November, 29th 2018). NO LATE ENTRIES WILL BE ACCEPTED! Make sure not to submit last minute to avoid missing the deadline." (source: https://itch.io/t/317350/rules)

Essentially, it's your sole responsibility to leave plenty of time for the upload and then making sure it got submitted correctly in case of issues like failed uploads, dropped connections, or even unclear instructions in Itchio itself.

It can feel harsh, especially after spending a long time on an entry, but there has to be a cut off.

Yeah, RPG Maker MV's delete unused files doesn't take into account stuff that's used for plugins. I went through my project and manually removed the RTP stuff I didn't need (even then I didn't dare touch the sound effects or battle animations just in case).

This oozes atmosphere! It's exactly the kind of entry I didn't know I was looking for! The way you've played with light and colour palettes is fantastic, although the sheer amount of green did make me think of the Game Boy on more than one occassion! :P

I was blown away by the really fun and bold look of this! It initially looked a little Saturday morning cartoon but it quickly apparent it's more Adult Swim, which is awesome! It's also really encouraging to see this seems to be your full-time thing with a healthy Patreon and everything, it means indie devs really can make their passion their primary income. Someday I'll catch you up! ;P