Allowing visitors to be able to sort games from oldest to newest would help people discover more games. :) And being able to sort games randomly would help with that, too. Sometimes sorting by popular, new and popular, top sellers, top rated, and most recent doesn't feel like enough to those who want to hunt for hidden gems. Just an idea.

I like it. :) I got ending 3. It's a nice story. There are some minor grammatical things and slight continuity inconsistencies (I feel like there are some present-tense and past-tense issues and I think that Merlin at one point was said to be 17 and then later said to be 16. I might be misremembering this, though. And when Nero said "11 in the afternoon" I got a bit confused because I thought he meant 11pm rather than am.) Also, I think the art could be a little bit better. But these things are beside the point: it's a nice story. I like the characters, the plot, and the music. The story doesn't feel rushed pacing-wise, nor does it feel like a slog to get anywhere, it just seems like it the writer knew the story they wanted to tell and told it well, and I respect that. ^^ I'm often faced with a dilemma when it comes to replaying visual novels when I feel that I got "the good ending". I don't want to see characters go through sad events for the sake of being a completionist, if you know what I mean. Thanks for making and releasing this visual novel~! ^^

Short, touching, and with a lovely art style ^^ Thank you.

Thanks for making this game. <3

Stylish. :) Cool to play if I just want to hang out in a strange neighborhood for a bit.
I expected to find a randomly generated number on the yellow building that I could press to activate rain, though, and I couldn't find it.

Hello everyone. I've finished the pre-alpha of the first chapter of The Silent Column. If you play it, I hope you enjoy. It's a visual novel that has science-fictional, supernatural, and mysterious themes. You can read more about it on the page. 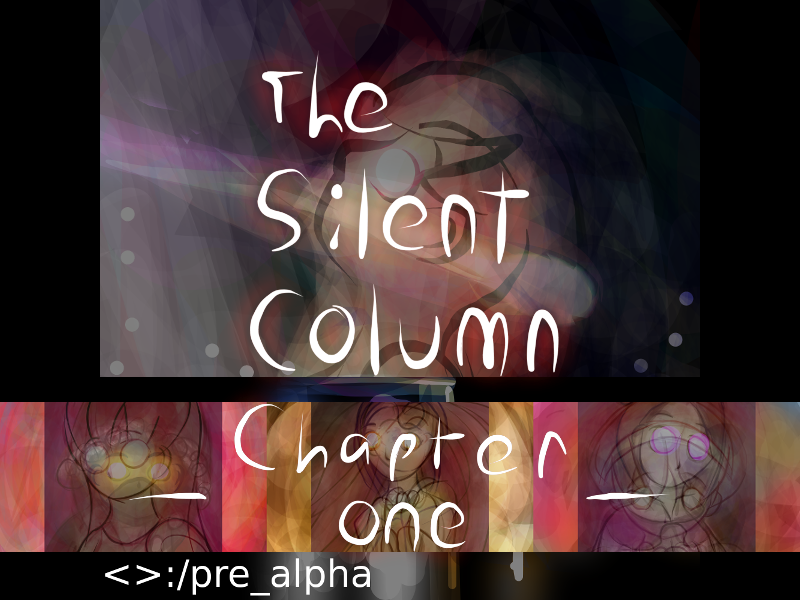 I've just started playing the game so I don't know what awaits me except for cute girls, literature, perhaps another cupcake, and dark themes because of the warnings, but all the artwork I've seen so far looks really polished and professional. Great job. :)

I used Ren'Py to delete the persistent data and it let me choose a new name when I started a new game.

It's fun. :) I think it could be improved by having a proper win and loss screens which would stop you from playing and let you restart/start the next level with a simple press of a key to not break flow. Perhaps a start screen could also be done in a similar fashion, and on which the effects of each colored block could be displayed. Also, moving with the wasd keys is a good thing to teach students how to do but there wasn't any real need to move in game. Still a great game, especially as a project for students.

I like the style and I'm impressed with how polished, simple, light-weight, and fun this is for a game made during a jam. :)