*Scuttles away like a certain Futurama 'expert on humans' Doctor*

Watched the video on Predation and issues, and i think i have a partial solution. TLDR the attack method and lack of camo is a major flaw.

Types of Camouflage could be useful.

1) Low/No movement high reaction. This would get you predators more akin to spiders, encouraging high speed but low movement (moving mostly when desperate, or when there's food within striking range) would encourage said type of predators. If they evolved to say have an appendage that could do a strike at a distance quickly and reel in the prey would help. Predators that could last a VERY long time holding in place would be potentially useful, especially if they learned to sit near a deposit of food source to lure in prey, or carry a food source and drop it near them.

2) Being less noticeable when moving less. It would be a camo level multiplied against distance (so further away unnoticed, closer more likely to be noticed unless a higher camo level). If there's a low level of how much movement you could do before it affects your camo you might get predators that move very slowly while seeking prey, like Preying Mantises.

3) Pretending to be a plant/food source. This type of camo would increase in the presence of other food sources, blending in and goes back to #1.

4) Pretending to be another species. There's spiders that pretend to be ants, and flies that have coloration to look like bees and wasps. So basically to get misidentified, which would be more noticeable the closer it got, when it started attacking, or if the prey adopted better eyesight to try and cancel said effects out.

Then there's poison (or in this case, paralysis and lower resistances to damage, and a little damage over time) that could be created. Poison would likely be expensive to use, but could be reclaimed like a secondary food source 1:1 for what wasn't used. Also poisonous that if they are eaten they damage those that tried to eat them. (which could be half movement, Damage over time, or slower digestion/energy recovery for a duration). Though if that's the case having a new gene when they could regurgitate recently swallowed food they could learn there are some things they don't want to eat and try to prevent said damage.

Which then gets into setting traps which have a varying level of camo and stickiness and strength. Or putting food into the trap so when eaten they get stickied. That would be interesting to see.

I guess thinking about it, it's the mix of the attack method currently is too limited and they are too easily to be seen, so there isn't enough diversity in predators making overspecialization to avoid 1 predator type the issue and not having to spread out as much for multiple types of predators.

Also appendages (from #1) could be used to gather plant food sources too. So it might be useful even for herbivores, but the cost rate wouldn't make sense unless food was very scarce and other herbivores were nearby thus to snatch food away from others.

Edit: Watched more recently on added digestion and how it will affect the bibits. Looks good but most of the above i think still stands.

Regardless i look forward to seeing more of this.

Other things you can add for it is AI programs/helpers, improved algorithms, connecting other systems, networks, and get silly with virtual machines and silly things like virtual abacuses. 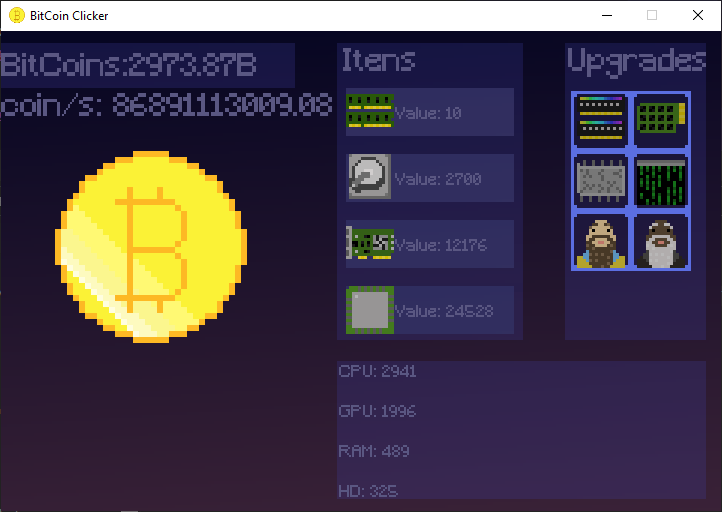 Whenever you restart the jar file, the upgrades are available again.

But what you see is about what you get. No scaling of abilities, or real increase of cost, or newer items other than the 4.