Thank you so much for your kind words! I'm so glad you enjoyed the story. And recognized Ozzy's legs ^_^ I deal with anxiety too so it's also quite touching to hear that you got to enjoy this game even though you might not be able to enjoy the kinds of immersive theater experiences that were a big inspiration to me when making it. Thanks so much, really <3

Thank you! I'll look forward to playing your game someday!

Thanks so much for your review! Having the player blink when hitting an obstacle is a good idea.  If I ever find a free moment and a little motivation I will add that in as an update :)

Thank you! I'm so happy you enjoyed it :)

Hello! I would be happy for any of these games to be included:

A short, strange, visual novel-esque game about plant people in a small town in the far north. They celebrate the winter solstice by opening bottled light delivered from the equator. Only this year, their shipment has gone missing...

I had a similar experience getting stuck and having difficultly with the controls. It's sad because the concept, aesthetic, music, and color palatte are soo lovely. I love everything about the game except actually playing it :(

From the pic shown it looks like it was developed for specific hardware tho... I wish I could play it like that! I bet it's really smooth

yo I felt it too

Thank you soo much!! That really means a lot! I have thought about returning to the world of Arcadia in future projects, and have some ideas about other stories in that universe, so it's definitely a possibility :)

This just warmed my heart thank you so much!! 💖💖

Thank you, I'm so glad you liked it! Drawing UI on the window--how imaginative! That kinda makes me want to try out a finger-drawn look for the UI in this game and put it all on the glass. Could look really unique. Maybe if I go back to it one day and add some more features I'll experiment with that :O

Thank you so much! So happy you liked it! I think the horse is indeed hardest lol, all the characters have different sized colliders.

I'm super excited about dinosaurily, it looks so cute and feel-good! Probably has a similar audience, so @ people reading this, if you liked my game check out https://jellolin.itch.io/dinosaurily!

Out the Window is a cute and nostalgic car trip sim in which you control an imaginary companion running beside your car, change the radio station, and pick out gas station snacks. Included is a healthy dose of media theory about how motor vehicles changed our perception of time, space, and landscape.

Thank you so much! The music was meant as a bit of a joke, although it does also reference the anticapitalist politics of solarpunk and the game. When I made it I wasn't even sure anyone would play until the end! Really happy you enjoyed it enough to do so! :)

In a distant future in which capitalism and consumerism have continued to run rampant, corporations have replaced all government, and planet Earth has long been relegated to legend, society constantly moves to new planets and throws away the old ones like last year's model of smartphone. You play as a guest at the launch party for the most recently developed planet: Arcadia. The party takes place at the planet's premiere attraction, the Arcadia Botanical Gardens. As a guest, you may wander the Gardens' various rooms, engage with interactive elements you find there, and eavesdrop on the other distinguished guests whose stories and dramas play out in a repeating cycle over the course of the night.

The game is a first person, single player game made in Unity. I submitted it as my media studies senior thesis at Vassar College in 2018. Since then I've touched it up a bit and I'm hoping that it's ready to find an audience. Thank you so much for taking a look! :) 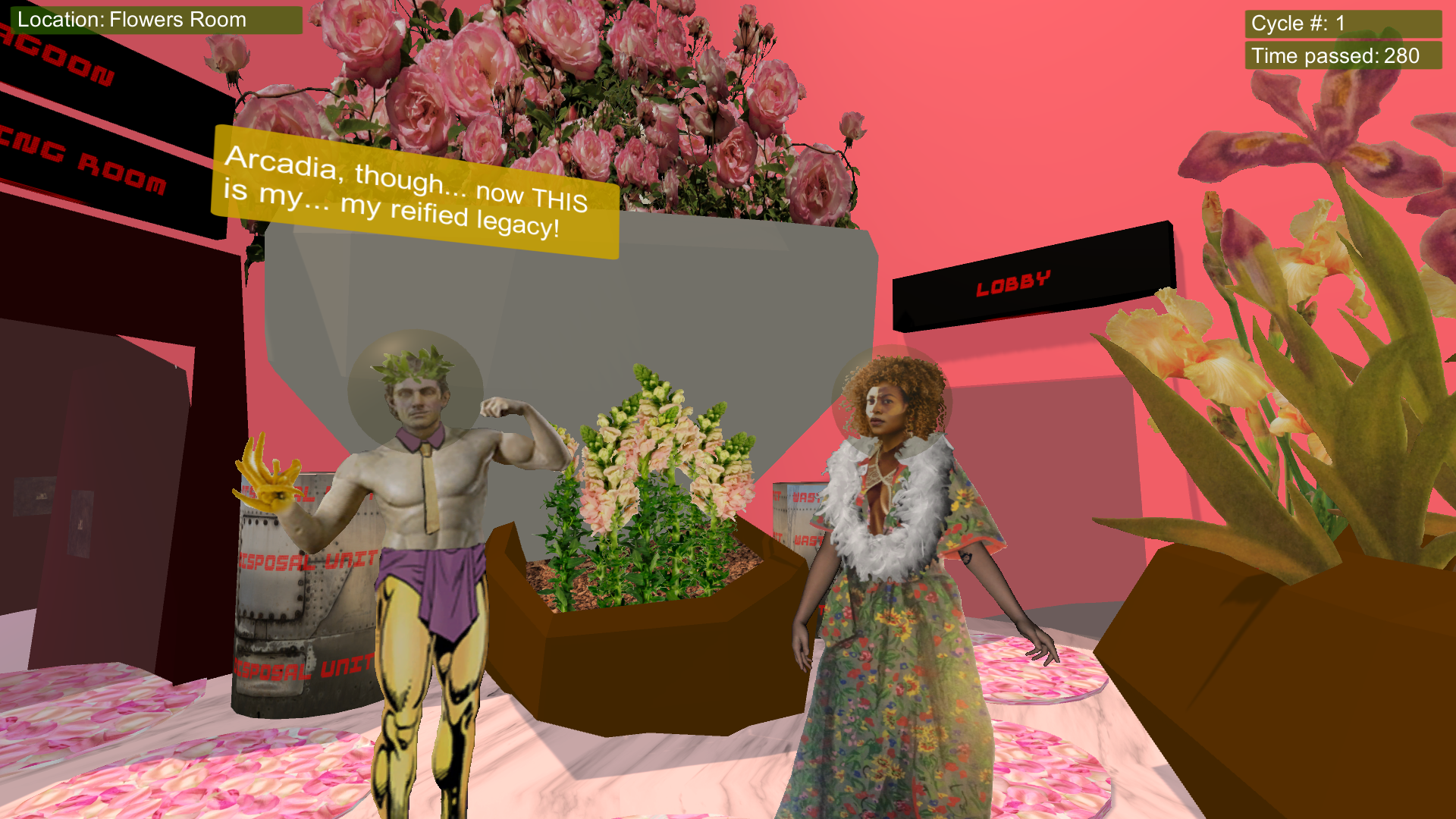 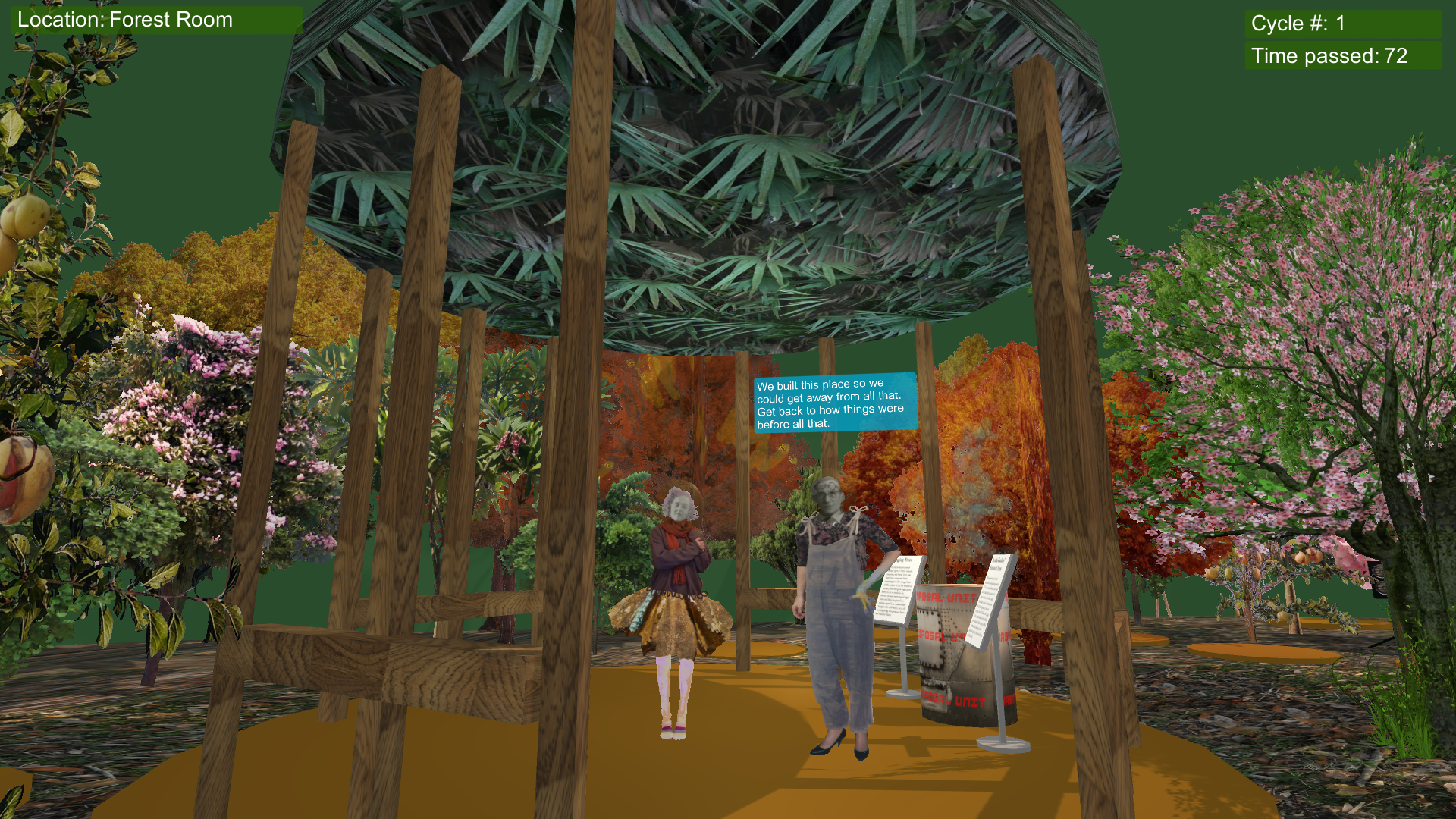