Hi! Thanks so much for playing and adding my entry to your video :)

The instructions weren't so clear, but if you press right click then you use a pickaxe to remove blocks in a circle around you (You can hit the dynamite to explode them in this way)

I think the idea is to collect all the coins, then find the newly spawned treasure map which will reveal the treasure chest

I definitely recommend giving it another shot if you have a chance just to check it out! It's a bigger game than expected

Hey thanks so much for playing my game!

I dont mind at all! I had a great time watching you playing 😊

Love the costume commitment too 😁

I think you arent the only person with that problem, so I should be sure to include instructions in game!

Thanks for hosting and for removing irrelevant submissions!

When can we expect an english version? It looks very intriguing! 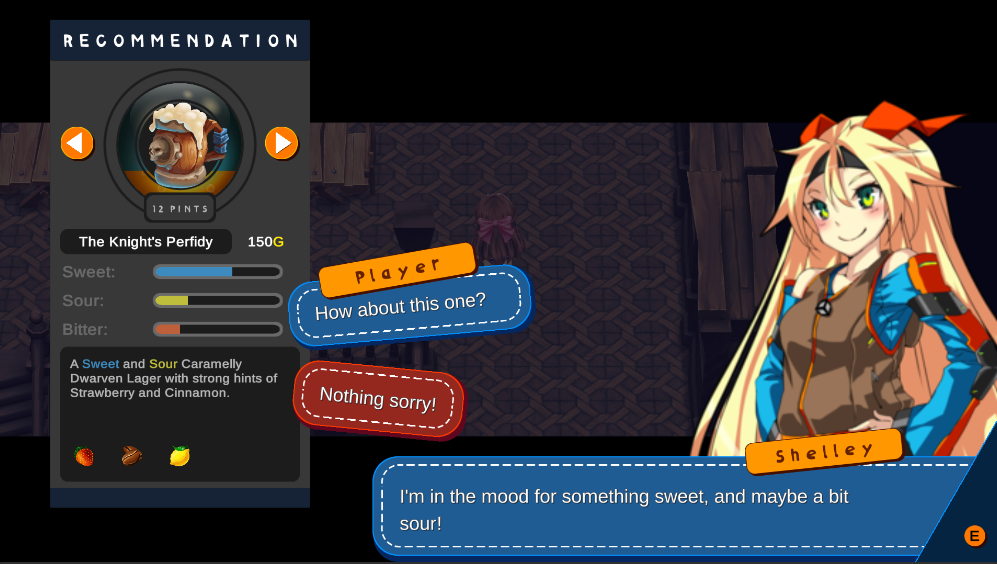 I have been working on Tavern Life for around 4months now!

The current portrait is a stand in.

I would love to collaborate with someone who loves designing characters. Send me a PM or email me at: alistair.m.obrien@gmail.com

Love this! Reminds me of Sword of Mana in a very good way!

This looks gorgeous! Im gonna give it a go later :D

Thanks so much for taking the time to give such in depth feedback on this game! I really appreciate that :)

Yeah! Actually originally we were thinking of doing something like that, but I realized that by the end of the jam we would probably only have half of a ship creator and no gameplay at all so we opted out of that. Would definitely be a great ideas to pursue it now.

Hey that would work pretty well :) Maybe twin stick for the gun aiming, but keep the movement fairly similar to what it is. Originally we were thinking to make two players supported on one keyboard, which eliminates the mouse as an input, but now I think its better to go with the twinstick mouse approach.

Yes so the thing with the weapons was that we wanted to have weapons be buyable and assignable to slots. Thats why they are mapped like that. But in retrospect I think it would be better to have a primary fire, a secondary fire and a special ability. Each of which can be upgraded via a skill tree (a very simple one! eg Choose: Faster Firerate - Greater movement Speed)

Yes the zoom is very terrible right now and we do need to add boundaries.

Yep! I am actually working on this right now. I have added the base of an AI who currently has steering and basic attacking. A lot to do, but a few things on the backlog are:

-Allow guns to rotate around (clamped by a max angle)

-Set up filling slots with AI vs filling with Players

I hope you continue to work on your game as well :D

This was really fun to play :D

This was very elegantly put together, and has a lot of future potential :)

I can imagine some very interesting pickups/shop items and boss enemies coming out of this!

Me too! So probably I should make some AI ships :D

Would love to keep developing this!

Love this! Really nice execution and impressive amount of words in the description xD

I love this entry!

Very cool idea and very well implemented. Impressed with the little rotation at the end of the correct validation. Makes it seem more complex!