Pretty enjoyable, I liked the snippets of dialogue and especially finding the notes/trying to kind of piece things together. There's not enough direction from the start though and I was confused, also the tutorial was boring bc I just had to read a ton of text (but tbh for an early release that's pretty reasonable to push through). When I say there wasn't enough direction I mean that I kinda was just wandering like I didn't feel like I had any clear goals, I just walked until I found something interesting. That's my main complaint from a gameplay standpoint, the dialogue was very enjoyable. I like the rotation/3dish style of graphics, but the sprites themselves admittedly are pretty ugly. It's an unfortunate reality of making games that you'll either have to pay someone to make high quality art or you'll just have to learn it yourself and push through. I loved the mood of the game, felt big and cold and slightly cozy at times

Edit: well heck cat finally got off my lap but it turns out you need paypal to pay for it guess I'll die

Pretty fun game! I like games like this, they feel reminiscent of writing short comics on lunch breaks during elementary school. Can't wait for "REREscape: The REscapening"!

Reply
One In the Chamber, One In the Socket community · Replied to QueenOfSquiggles in Request
Not-Apollogising3 years ago

Reply
One In the Chamber, One In the Socket community · Posted in Request
Not-Apollogising3 years ago

I'm pretty sure I already did. Is it not showing up for you? 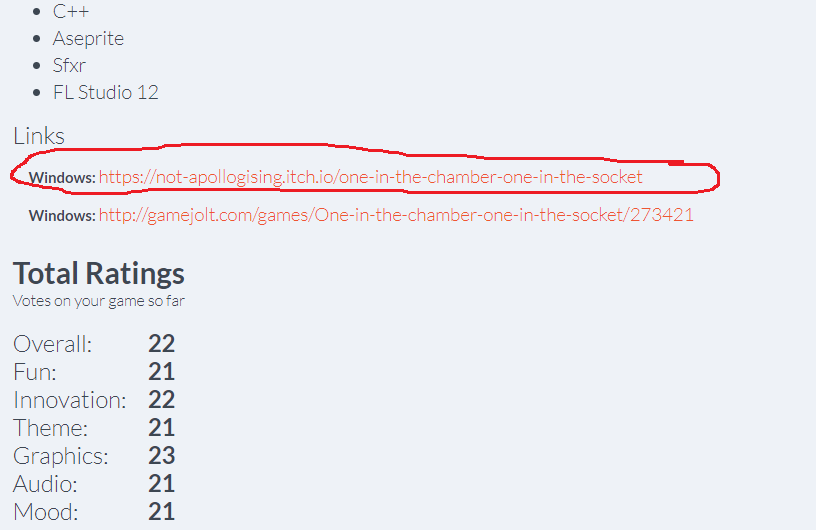 I think the transitions would normally be ok, but there's a pretty big contrast in all the music so maybe if they faded in and out a bit slower. Playing it again I didn't notice it as much, but it's a bit weird having music on during the opening sequence.

I deleted the demo and after re downloading it I couldn't recreate the crash.

UPS is updates per second, so what I meant by that was usually when a game has framerate independence the game looks slow but it still updates at the same pace, but when I was playing it also cut the updates in half, so everything took twice as long to do.

Pretty damn fun, I actually kept playing after I died. I'd just suggest tweeking combat a bit and adding more enemy types, because it got a bit repetitive

The music is really good and very fitting, but when you move from zone to zone the music transitions too abruptly. It's especially noticeable when you start up the game and go from title screen to the opening scene. Also, the text noise is very high pitched which makes it pretty annoying to hear it over and over again, and it's fine most of the time but, for example, when you press enter and go to the equipment screen, going all the way down is extremely annoying. Also, the game crashed for me when I pressed jump after walking into the treadmill room. It also happened on my other computer (they're both 64-bit Windows 10) . One other small thing, the game runs perfectly in windowed, but in full screen even with 8 GB of RAM and 3.0ghz it still runs at at least half the UPS and half the FPS. Other than that, content wise, it's great! Really great feel to it and captures my attention. Great job sol! Definitely gonna buy it when it comes out.