Can you listen lizard tribe OST upgrading the game? Or do I have to reinstall it?

Edit: I had to reinstall the game with the same actual build, it worked.

You need to produce the spectral syrup, and the heat occisa is an ingredient for the syrup. You need to study (book icon in your hut) and search for the ingredients.

Edit: I forgot love potions are useful too.

Edit 2: Can anyone listen lizard tribe BGM? I can't

Antilycan? Check in Full Moon event and complete the missions marked there.

First you need to build the prison, then more Plank and silver powder. This last one will be able to buy from Logan or the night Witch.

I'm stuck about Logan and Ste. I'm unable to get more Like points from Logan (11) and I have no new jobs from him since encourage him. I have finished Full moon (Were Bernard), Bandits' camp (Logan encouraged), and Curse of lust and Lizards' treasure (both good endings). And about Ste, I got free him because of Arion helped me with Vicoria, but I can't find the route in the underground, both Victoria's cells are empty.

Edit: I had build 0.34, upgrading the game to 0.35 the way to meet Ste in his home was fixed. I think I had a file corrupted in my smartphone.

Edit 2: Thank you so much. It seems I need to replay the game after finishing the full available events and getting further on the WIP ones

Any spear, bombs, slingshot with round stones, even a stick.

Reply
Minotaur Hotel community · Posted in Do you actually get to have sex with Asterion?
NoAttention121 days ago

Well, I didn't care about Asterion's role as bottom or top, but being submissive/dominant. I believe his development as character will be the key feature to encourage or discourage him to "take the bull by the horns", ironically speaking, and I trust in the developers that they want to surprise us.

Reply
Tavern of Spear v0.195b community · Replied to Li'ldog in In the gallery on third page and on the second row how do I get sex scene
NoAttention134 days ago (1 edit)

Both lizard tribe ending, or neutral ending giving the fruits to the lizard tribe. Both cases you must forgive Nauxus, and then a date with him

There's a guide on how to get the good ending in both bull or lizard routes, and be defeated by the secret enemy. I recommend save your gameplay before fighting them.

You can sometimes rollback, but after send your staff to tasks.

I remember I once sent Asterion with Argos and never sent him to the valley again, but in the next metting with Argos I answered with "I'm a sadist" and automatically I went to ruthless route, even if I haven't sent Asterion to the valley. In speedrunner background I sent him by accident in the chapter 12, and I went to ruthless again, but this I haven't saved my progress. Fortunately I found all endings, so I started again. I don't want to feel the same experience.

It's better a reply than an edit. I unlocked all 4 endings, now I can't stop searching for Argos' true identity in the main route in other backgrounds. He is a good snakeman, and I loved how he develops himself in both main and ruthless routes. The hardest ending to find, for me, was Asterion's ending

Thank you so much. I've found the new dialogue meanwhile I started again with another background.

I don't know if the star in Asterion's head is for real a birthmark, but it's seen in his first trial when Androgeos tries to convince the judges, so I assume that's a birthmark. Just curious, the name Asterion means Starry,  that's the reason Androgeos and MC call him "Little Star".

Now,  going back your topic,  I suppose his birthmark will be more important during the next builds. Now, Argos' situation in one of the endings, I think this is the punishment to let MC go further with "gods' will", nothing so rare if we're looking at other greek heroes' myths

At last, I unlocked all ruthless endings and completed the game with 3 different backgrounds. I say 2 things about the game, one good one and 2 bad ones, and these points are explained with merely subjectivity.

Begins with the bad one. It's very interesting how the background affects dialogues, choices and interactions with all the characters, but I sometimes feel annoying when the games shows the phrase "Some actions are limited because of your background" during the gameplay, even if this was once. I admit that the VN isn't finished, but I think this message fits better when MC meets the old man, meanwhile the moment the phase is showed in the actual build would be replaced by another one according the chosen backgroung, non directly explaining what limited are you and which choices aren't available. This feature was very well in most moments,  but this one.

Then, the second one. I must add that I believe Kota is the least approached character. Knowing he's a four hundred dragon who traveled to many places and is more experienced with the world, he would share more knowledge with MC, and overall with Asterion, instead being a matchmaker. I think his development is reserved for future builds, but now, take a rest,  you've all deserved.

Now,  the good one, and I'll say it with caps on. CONGRATULATIONS!!! The story is excellent. Every interactions feel too natural that scared me in certain moments. Many secrets, a lot of ways to find them, Argos' story, MC interacting with other NPCs, P and Storm's story, both routes, everything is very well implemented.

I'll say the same thing here that I wrote in the ruthless route topic: my brain betrayed me, since that moment I can't stop listening the mexican VA Blas Garcia's voice when Asterion talks (I'm mexican, sorry not sorry), he's even more cute when he's kind, and harms me more when he's sad, or destroyed in the ruthless master route.

One more thing, I cried so much in the underground chapter, when he tell MC how the realm became the hotel along some experiences. And that song named Foolish child made the moment further.

No other VN trapped me like MH and goes further as make my brain betray me or making me cry.

Reply
Minotaur Hotel community · Posted in What accessories and clothes would you want to give to Asterion?
NoAttention152 days ago (1 edit)

Hmm, I was thinking, would be necessary create a new tread for memes, or may post here?

Maybe I'm too vanilla, but my most favorite part is his golden heart

The ruthless route gives some answers

For me,  ruthless route was very hard to deal because of I've beforely played the nice/romantic route, and my brain betrayed me, imagining mister Blas Garcia's voice as Asterion's (I recommend you watch the scene Tai Lung vs Shifu in Kung Fu Panda dubbed on Mexican Spanish). I've unlocked 3 ending, and wow, that's a very good way to explore Argos' story and his legacy. I hope to discover the fourth one.

Reply
Minotaur Hotel community · Posted in Can We Change Preferences?
NoAttention154 days ago

Knowing how Luke is, but Asterion and MC talk with him as payback in that moment, so don't worry

Golden fur, because of I love his golden heart 💛

Well, about another accessories or clothes, maybe a suit,opened shirt, and as above, glasses 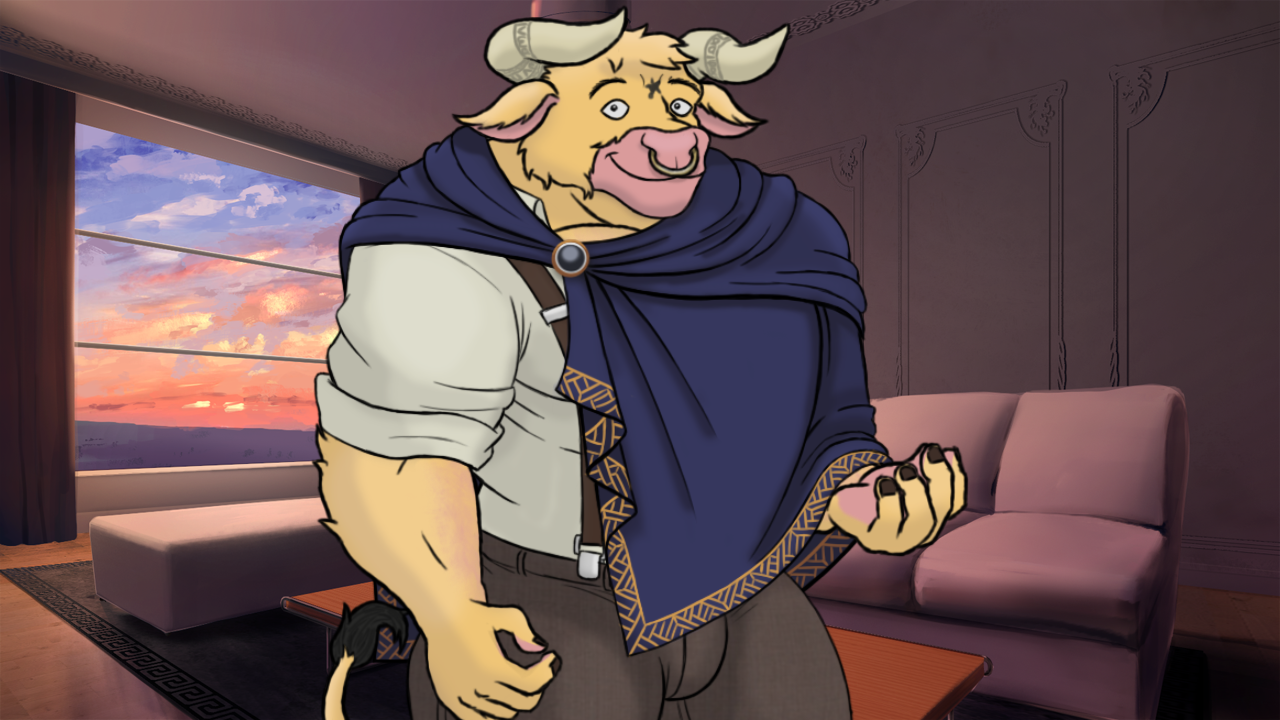 Hmm, it's my phone or Gameplays, or some mobs react different when they're defeated by lust? Example,  when I defeat red orcs and Northcrest defenders, their attitude increases,  but against lizardmen or bandits,  their attitude still decreses