Few technical things I noticed though:

Aside from that, on my Linux machine I’m unable to hear anything, there’s a repeated terminal output which I’ll include below.

Reply
WAKER community » Feedback and Suggestions · Replied to akirassasin in v0.6 is such a BLAST - critique
Mr. Heating200 days ago

Glad to see you’re alive and (presumably) well! And you’re not the one replying late here :). I’m sorry I wasn’t around for this past 1+ year. It’s not for lack of enjoyment from your game.

Come to think of it - a daily mode without leaderboards would probably be almost obsolete with seeds and save slots, though maybe add the option of leaving a name kinda like in arcade machines?

And I just remembered - wasn’t there like an arena mode or something in 0.3 - 0.4? Any particular reason you scrapped it?

As for the future, do you still plan on expanding the lore?

Either way, good luck on your path ahead!

Reply
WAKER community » Feedback and Suggestions · Created a new topic v0.6 is such a BLAST - critique
Mr. Heating205 days ago

finally. Finally. FINALLY I finished what I set out to do 1.5 years ago and completed my final stage with no perks. More on that later.

Imma start off that in the time I missed out on 0.4 and 0.5, WAKER became much better in almost every way. From what I remember, granted, it’s a while back, 0.3 still felt like a prototype, among others due to lack of sounds, this feels like a mostly finished product, in terms of the polish for the existing features. The gameplay is fun, music is a banger, and OMG the mouse control is sooo well implemented - and now I know that playing with a graphics tablet is amazing.

To the still less polished parts - big elephant in the room are the perks. I’m not sure if it’s something fundamental or simply a matter of adjusting some numbers, but the reason I spent the last year trying to beat it and dealing with the frustration of not using perks is because it feels like they trivialize the game, apart from adding complexity where I fell for WAKER because of it’s simplicity (Which I could live with, if it weren’t for the first part).

As can be seen in the latter part of my playthrough, perks pretty much melt bosses (and everything else, for that matter), which I don’t like especially because at that point the attacks don’t even reach you before the next phase is initiated. Basically my issue here is that “avoid bullets” becomes “do a bunch of the easier levels, then grind them with perks and the remaining 2/3 of the map are pretty much done at that point.

As I said, I’m not sure what exactly can be done to solve this issue. Or maybe that’s not even a problem and I’m just too much of a purist.

Other than that, there are a few other issues:

Further suggestions, unrelated to the update(s):

So, closing up: Game feels amazing, the perks are IMO too OP, and difficulty of individual levels has occasional big spikes. Out of game controls are a bit awkward. Perk description is also not entirely clear - what is focus speed vs strength? No remarks to sound and music other than that they feel just right. I love how the mouse movement is implemented, especially how seamless shifting with it is.

Of course all that implies that you still want to work on this game. It’s understandable if you don’t. Good luck with your school either way :)

Love it. Have been trying to defeat the final stage without perks for few months now. It’s quite the challenge.

Last but definitely not least, has contributed a new guitar solo to “Fly Me to Kadath”!

There’s no name between the spaces.

Ok, so, no surprize at all here, the game requires OpenGL 3.2 at least. You may want to put this as a minimum requirement.

Works rather well with software rendering on a mobile 1st gen i5 though, apart from occasional hang-ups and fps drops in menu, as well as when rendering shadows or many sprites.

Testing will continue when I get to my actual computer.

Don’t apologize, codingand gamedev is a hard craft and there is no shame in not overworking oneself. The fact that you got back more than makes up for the inconvenience of waiting, and already puts you far ahead of many game companies from the perspective of a Linux user. :)

Oh really? Thank you, I’ve almost given up hope. I’ll try it as soon as I can!

Linux will probably come out first

That’s more than fine by me, I rather included MacOS for fairness sake.

I plan to implement all of the things you’ve mentioned

Are you sure though that you would want to keep DX, OpenGL and Vulkan up at the same time? My suggestion would be to go for OpenGL for now, as it is supported on all major platforms and goes far back in compatibility, and porting from that to DX and Vulkan would be much easier than in any other direction between those three. At least if memory serves correct.

Also what are your thoughts on making sure your game works in Wine so long as there are no native builds? Would that be something you’re interested in now or is that all later?

Do you have any thoughts so far on supporting more than just Windows eventually, like Linux or MacOS?

Also what about supporting different rendering backends, such as OpenGL and/or Vulkan, alongside/ instead of DirectX?

Obviously none of that must happen right now or in the near future, just asking for your thoughts.

Climbing or touching the wall before dashing is not required, I do it in the videos for precision, but the first time it was an airborne dash.

You can also just hold the box and float on it. Also thanks to the pause mechan… bug you can throw/shove boxes with you.

Any chance for a native Linux version as well? Considering that it’s in Unity and already runs on both Windows and MacOS it shouldn’t need more work than simply exporting it accordingly.

One thing that bothers me way more than it should: scrollin in the about section with the mousewheel is painfully slow.

NVM, it also works by going to the library and right-click → launch.

All right, so it only works if you click the recent download button, not by any other means from within the itch client.

If you are considering another game engine, I highly recommend Godot. It is a very competent engine, that does not bind you to any license due to its open source nature, with a programming language similar to Python (making it one of the easiest ones to learn), but also allows you to create simple things without any coding.

And it has a solid exporting system, meaning you can build your projects for any modern platform (including mobile) usually without worries.

It has many more perks but I don’t want to make this sound like an ad :)

in your terminal. After putting in your password and confirming by typing Y (May vary in your system language) it should install the missing library. At least that’s what did it for me.

Also judging by the borders of your window, your Ubuntu installation is outdated. you should upgrade to the latest version (20.04 as of now) when you can.

Doesn’t seem to work with the sanbox though. 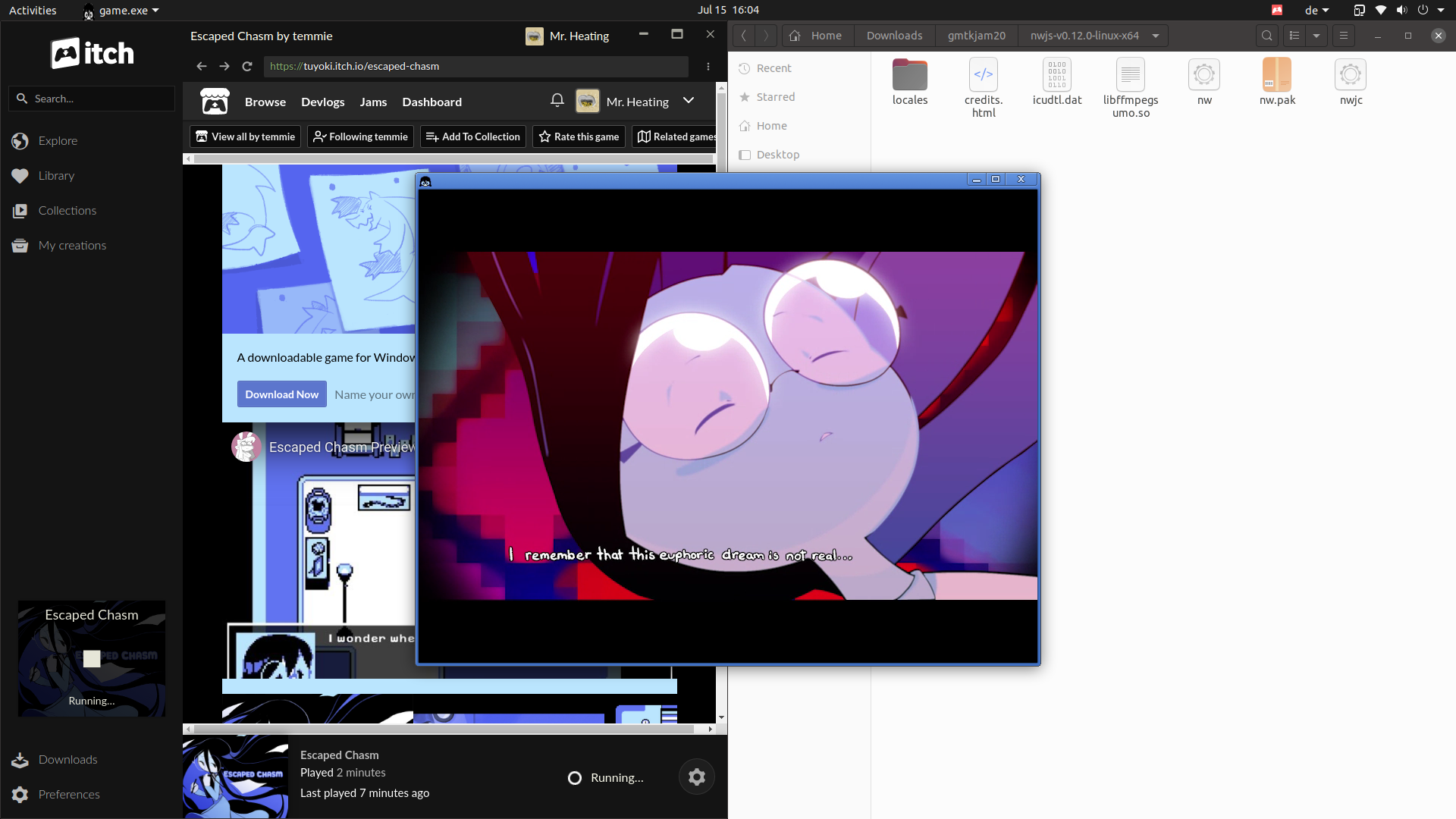 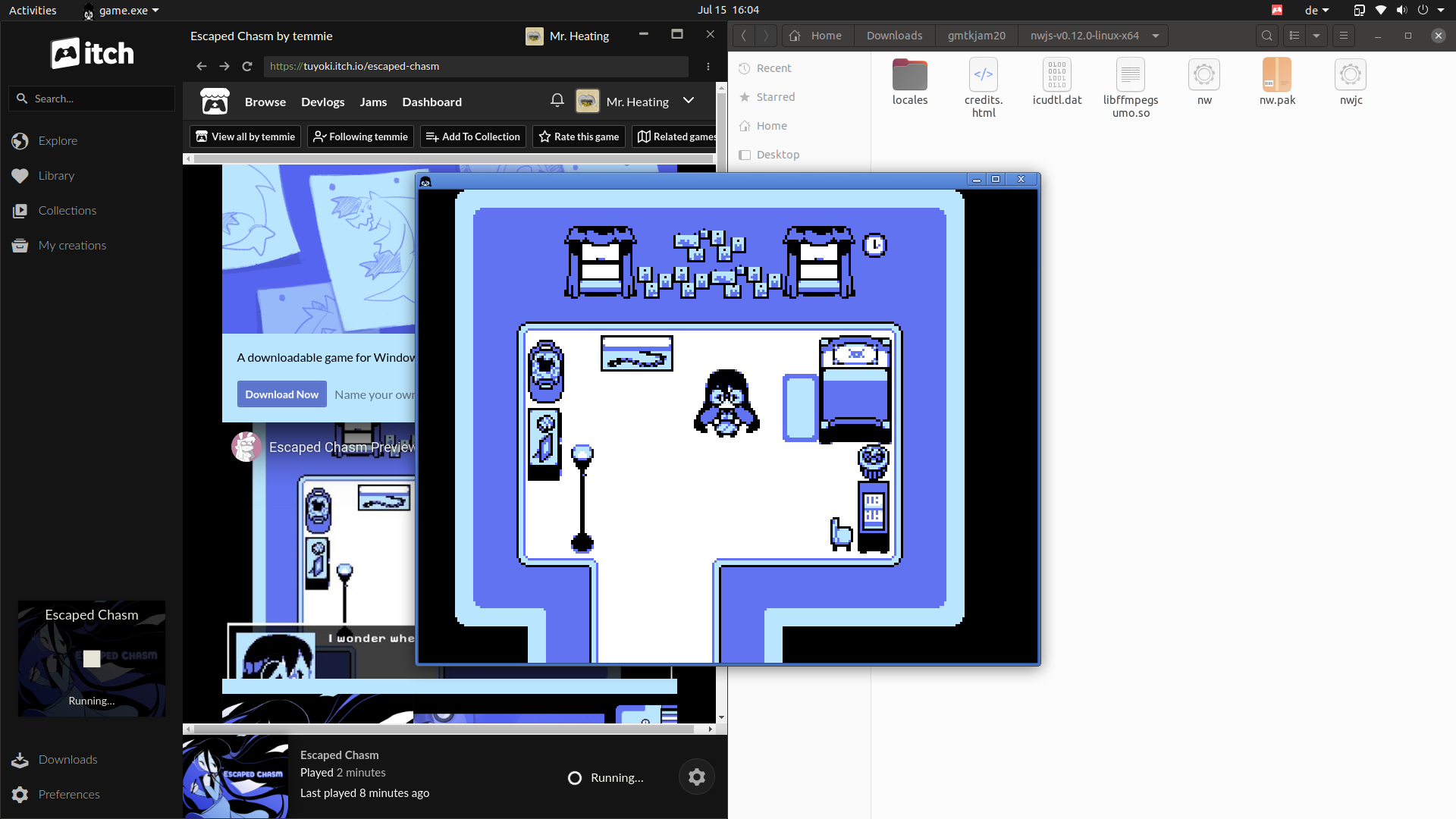 Huh. I was trying the native thing but I downloaded the game “manually” through the itch client, which initiated the installer, so I downloaded the recommended version through that and now it works out of the box with Wine 5.12. The borders are custom and scaling only makes things blurry, but other than that seems functionally fine.

I think that you’re mixing up hard and realistic,as both things can exist independently.

It certainly doesn’t feel realistic to just zoom at least 20m below in an instance, and I’m talking about the very first drop.

Yep, works much better now, thanks :)

Ok, so you know how many games make the mistake of having their physics too ‘floaty’? well here it’s the exact opposite problem.

interesting idea, rather immature gameplay. Being able to deflect the shurikens would be a minimum for me. But a working Linux version is awesome.

Holy sheetballs, that’s the best of this jam I’ve seen so far. By far.

Only complaint is that you might get out of bounds and die tying to go back.

Also, for the future, if you ship executeables to Linux in an archive, pick a format that preserves file permissions, as you need a certain permission to be executed. .tar.gz would be a good choice, as it works natively on all UNIX based systems.

I love the originality and the cover art

The shots sometimes terminate at the sides without damage.

Short question: ever heard of sizing the hitboxes according to the sprites’ visuals?

Reminds me of many things you’d find in the better Undertale fangames.

Your page shows Linux and Mac support, but there’s only a .exe file.

I’m a fan of the idea, but I wish there were some presets, because as a player I have yet to understand the dynamics while already picking specific things.

I experience the same behavior. The application appears unresponsive to the szstem and Steam is instructed to launch the same game. and it looks like, if you resume too quickly it’ll just hand indefinetly.

Also the game crashes if I try to press [F1] to configure controls, as the settings menu suggests.