Yea, I wonder why.

Not really, I'm just used to every single tetris game in existence.

This is literally unplayable. And not because of the gimmick - the controls seem to be designed by someone who never played tetris in his life.

Here's how it should be:
Up for hard drop
Down for soft drop
Z/X for rotation

I am as aggressive as you are greedy. This is not something you can ask any money for.  You need to build up actual skill and experience to be able to produce games worth selling. Cause this is the level of a free Unity platformer example.

Eh, this is the most basic-ass platformer one can make. Not sure why it even has a pricetag on. Even visually, it's pretty boring, with that default 2D light engine and literally no other graphics beyond that.

Moreover, the platforming mechanics are executed extremely poorly - the lack of coyote time results in a ton of missed jumps, and unweighted jump makes moving around pretty unsatisfying.

Besides, the game is downright boring with literally nothing to do but jumping up, and pretty rough punishment in case of mistakes.

For a baby's first platformer it's alright, bu then again, for some reason it's advertised on other sites and has a pricetag on it for some reason. Don't be greedy.

The progress is, well, kinda slow. I've had a lot of shit happening irl. Don't worry, tho, the game is not abandoned and will not be abandoned. Buuuut, it's still at least 2 full years away - best-case scenario.

My god... Do I really own this now? -_-
Is there a button to remove/unbuy certain games?

The Knight. The one who guards The Crown. The one who protects innocents at all costs. The one who makes justice to prevail. Today's sirs don't remember any of it... They drown in loathness, only able to feast and prance on their steeds. It is time to remind them who The Knight is. And when the last dragon will be slain, when good will triumph and my glory will spread over the lands, people will hail:
OH MY GOD, LOOK AT THIS KNIGHT!!!

Grab your shiny helmet and trusty sword, gather all the valor and honor you have, and show everyone, what being the true knight actually means! 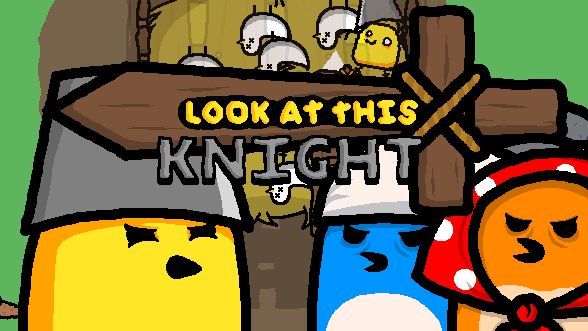 Ever wanted to play VVVVVV, Pivvot, Super Hexagon and Impossible Game at the same time? No? Anyway, it doesn't matter, because now you can!

Change gravity, dodge obstacles and reach 1000 meters on each level to reveal The Mystery! You have to know what's hiding behind those question marks, right?

This is a reply.