You can get it here.

I intentionally made it so that if the ball is in contact with a collider when thrown it gets destroyed.  If you don't, you'll be able to throw it inside the collider :(

:)  thanks for playing, and thanks for the artwork, I really like your style.

Thanks for playing, glad you liked it.

Made a short teleport puzzle game using your assets. https://little-pug-games.itch.io/pink-guy-adventures :)

To date or not to date? What choice did you guys make

These are awesome! Thank you

I liked your critique and comment. I'll keep them in mind for my next project.

Checked the game after your comment and found a bug with the character, fixed it. Thank you

Can you release the square people as a sprite sheet? They're pretty cute and it would be awesome if I could use them in a game!

Only Sunnyland assets were used to make Foxy Runner. Its the most fun you'll have with an endless runner! I made it only for android though :)

I  don't like how I need to use different applications to create my sprites, music, tilemaps, and game FX. I'll use affinty designer for sprites then ableton for the other than I have to look for effects that I like on opengameart.

Long story short I like to program things and I thought it would be awesome to build something that would solve this issue. I'm in the beginning stages of building a 2d game asset development studio. The idea is that you will be able to build your sprite sheets, game FX, tilemaps, and music all using one suite of tools.

You'll be able to save and retrieve your game assets anywhere using the the studio cloud. You'll also be able to import any game assets that artists or other game devs create and share publicly, also using the cloud.

Can you guys help me in deciding what features to build out first by filling  this survey out. It has a list of the apps and features the studio will have and it'll help me decide what the most important features are.

Also, can you guys share any of your pain points, or ideas that would make your game dev work easier and more efficient. I'm all ears and open to listen to your ideas. Thanks

Been keeping at it the last couple of days. Things I implemented

Here's my little object pool  outside the game area,  its funny my explosions have collider on them so they push the missiles away, need to make them triggers, lol  :) 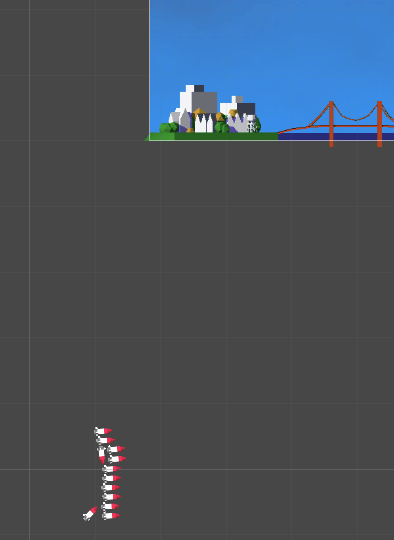 Things I need to do.

Also an idea that bugs me is how should levels and waves be implemented? Should I just make enemy missiles spawn faster? Also having power ups would be cool, like missile speed up or wider area explosion, etc...

This is my second game. It will be a simple missile defense game. I've always wanted to make one and it will help me ramp up my unity chops.

Today I did the following

Tomorrow I want to do the following

Finished you guys, added some music, and explosion sfx, and a little surprise if you go fast enough!
https://rudaloo.itch.io/pug-wave-rider

DUDE, this is awesome!

I got the following done

I made a happy face missile :)

For tomorrow I want to do the following

Made the game objects spawn so that they're not so close anymore. Also added bonuses the faster you're going and a points section to the right that tells you how many points the current hoop scored you.

Tomorrow I want to get the following done

The other part of the game that I still need to create is the intro scene. I'll do that in 2 days after which building any of the stuff below would be extra

Thanks man, I'm using Unity to make the game. Credits for the water go to TimJonsson on deviant art!

I got some time to work on this today! I was able to get my point hoops into the game. I was also able to add some new sprites into the game. I updated the code to take care of the speed up and points aggregation.

The goal for tomorrow will be to seperate out how close the obstacles and hoops can get to each other. They're all bundled up as it is right now. The next big part I plan to build out tomorrow will be the incoming object meter. It will tell the player the type of incoming object like green hoop, blue hoop, or obstacle by a color and a distance. For example an obstacle will show up as red with a countdown of how many meters left to get to the player.

Thanks for reading! If you guys have ideas let me know.

Hi, my game is going to be called Pug Wave Rider! It's my first go at making a game, so the  goal for this gamejam will be to have an up a running game at the end.

The gameplay for the game is as follows. You play as Johnson the pug. What you have to do is score as MANY points as you can riding your jet surfboard. You do this by passing through point hoops, BUT you have to watch out and avoid all the obstacles. The more hoops you go through in a row the more your score multiplier goes up. Here's the catch though the obstacles will start coming in faster and faster!

I started with a different idea in mind. In the beginning you had to cross in front of the obstacles as close as you can without hitting them to get points. I decided to make the pivot mentioned above. I think it would cooler. Here's what it looked like.

A lot of the inspiration for this game comes from Solipskier. Its an ios game thats super fast paced and fun.

What I did today was add the bonus multiplier by seeing how close the player gets to the obstacle, restarting the scene by pressing the space bar and I also got my first pug sprite! Tomorrows goals will be to will be to implement the hoops, as well as the obstacle speedup when going through hoops. I'll also widen up the play area as its a little narrow.

Below are sketches of game characters, obstacles as well as a sprite of Johnson. 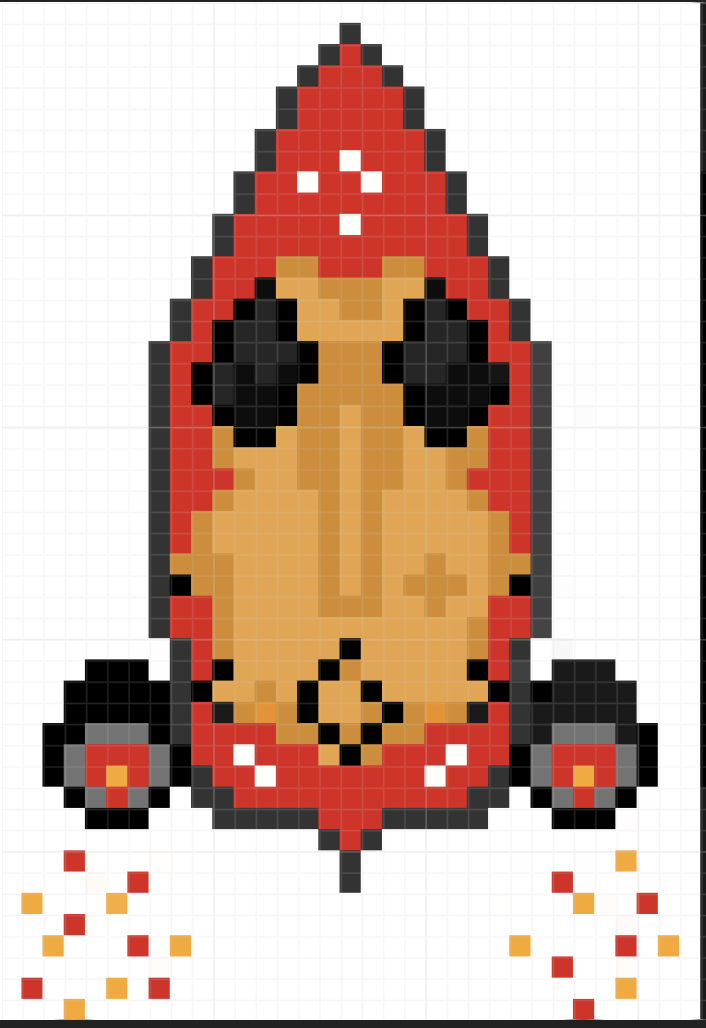