A very cute and satisfying experience! The sound effects and visuals perfectly matched with the feel of the game and I got really invested once the plant started to grow! If you ever expand on this you should make a bigger selection of plants that require different parts of the keyboard (one that uses the numpad, one that uses arrow keys, etc)!

Very nice visuals and environment! I loooovvee this aesthetic! The details such as the small particles that just float around and the gradients in the plants really tie it together! If you keep going with this project I hope you'll make a variety of space gardens that players can just walk around and explore. Maybe add more physicality to the fountains and smaller plants? I was able to phase through them and it would be cool if you made the thinner plants sway when the player walks by them.

There is a hole though but I think that can be easily fixed!

been tightening up the story structure and started working on the assets! here are sketch mock ups of your friends and an updated colored sprite of wizard worm, though i kinda want to leave everything else in greyscale, since wizard worm is the only one who can brighten up these kids's sad realities!

Been thinkin a lot and I think I nailed down a story structure that I can finish within the jam time! It's definitely becoming less of a horrific summertime memory like i thought it was going to turn out and more about a fun romp with a magic worm (which is still a little horrific in some ways).

Have some story notes and doodles! I am deeply interested in these item flavor texts

ok! got ahold of ren'py and man, what a cute and informative tutorial! All engines should have tutorials like this! I want a transforming cube to tell me how to code things in Unity.

So like yesterday's goal I did succeed in putting words on the screen! And making menus!

The first three give you:

but the last one gives you:

So yeah! I just wanted to show off my newfound Ren'Py powers! I don't know why I thought this engine was like a nightmare to make things with, but it seems so easy just to jump in! Guess I'll just get to writing then!

s/o to my teacher Eileen, very helpful, highly recommend her class. you could say she made it as easy as

wow today was pretty stressful!! but, on the bright side, I did get a better idea of how I want to structure this game!

I read over Aevee Bee's notes over how she and Mia Schwartz planned We Know the Devil (which is a very interesting read and WKTD is good visual novel too), and I just realized how tight and meaningful the writing is. Part of that I think comes from the simplicity of the mechanics that was kept in mind throughout the design process. So it got me thinking and I'll have to rein in my ambition a little so the project doesn't suffer from a huge scope. So I'm going to focus on three different routes the player can take and try to limit myself to not branch the paths out too much.

Deadlines for the first week:

Ah yeah! I've been messing around with Famitracker b/c (1) it's free and (2) i like the 8-bit sound it has to it. I'm thinking of having some minamalist/simple music so I don't stress out too much about music theory. I'm not sure if the 8-bit sound fits the mood I'd like to make for the game though... so I might check up on those other music making softwares til I find the right instruments or sound, etc. That's one of my jam goals so I'm gonna try and stick to it!! Also another deadline:

I'm going to switch to Ren'py! I think it'll be a little more flexible for what I'd like to do since Wizard Worm is a choice based game with plans on having quite a few visuals! As well as the fact that since I plan to have music and sound, I'd rather not mess with the timing of javascript. The UI seems like something that should wait a bit until next week. and finally:

Hopefully I'll have enough stuff done that I'll get something playable this coming Saturday! Two weeks really isn't that long with other things I have going on, so I'm going to have to hustle!

So Tomorrow I will:

I've been bouncing around ideas since last week but I think I'm going to try and see if I can make this idea work! I feel like Twine would be a good engine to go about making it in, so it can be similar to a choose your own adventure game. Plus I feel as though this story would work well in a more prose-like format.

Gameplay would be centered around how you'd want to deal with Wizard Worm. I was outlining lots of key events that could happen through the course of the game. I came up with a lot of bad endings though. I just finished watching some playthroughs of zero escape games so that might be why I came up with so many endings and how they would unlock other endings on multiple playthroughs. BUT! I only have so much time and I still need to figure my way around Twine.

The default styles aren't really what I'm going for, so it looks like I'll have to figure out some CSS. After playing some of Michael Lutz's Twine games, I definitely want to make the story readable and visually interesting to follow! Of course, I'll probably end up making most of my own assets, as it looks like it'll only be still images and some music or background noise. Oh and writing too! Tomorrow I'll set some deadlines down.

Wizard Worm is an idea I've had since last summer about some kids who get terrorized by a power hungry worm with magical powers.

[i'll probably change this image later b/c it's kinda gross??] 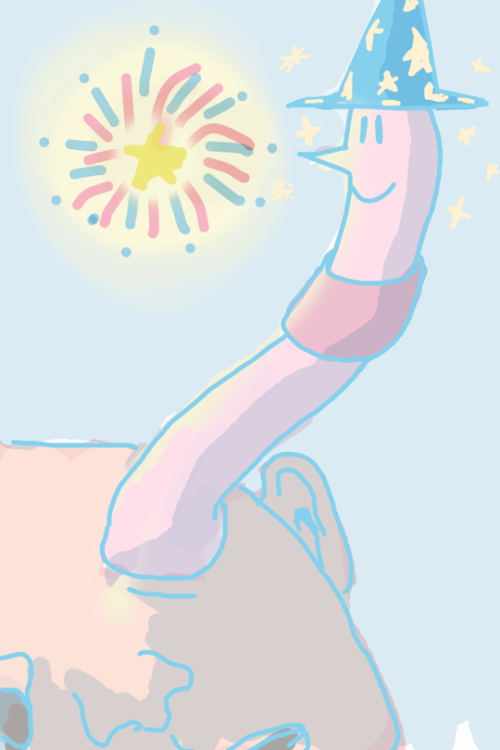 Story
While playing in the park one day, you and your friends discover a small worm wearing a pointy hat claiming that it's a wizard, able to do anything humans can do and more. No one is impressed with this worm, and you all are about to ignore it, until all of your parents are suddenly held captive in giant floating cages that appeared out of nowhere. Will you appease the worm? Destroy it? Save your friends or your family? Or abandon all of them to save yourself?

Wizard Worm can do anything and more. What will you do?