Theres a play icon at the top middle right ish of the hud when you're talking to someone, that's the skip button

Edit: figured it out, didn't talk to Rylan.

I completely forgot to reply to this, lmfao

Obviously after what happened I have more questions than answers, but...really, I just forgot that Jean explicitly said the letter was from Clement and was lying. I suppose I'm missing something, since as I learned from the survey there's a way to actually figure this out before the twist happens, so I'll need to replay

I'm not 100% sure on how to put it into words, but if I had to put it on a scale, I would say 2 or 3. Not enough to ruin the character of course but it kinda bothers me. Thinking about it, I do like the scene in the garden where he's concerned with MC taking advantage of Asterion, and later trying to potentially coax Asterion's feelings out. That was good and touching. The later scene with MC and Kota I like less (especially since he's drunk off his ass.) I actually thought at first it was going to be about his own love, or the red dragon he's looking for, but it just turned into him ripping away MC's insecurity, as well as Kota's opinion on gay people in general (which I feel is even less necessary since this is a gay visual novel and he's tolerated Luke up to this point.)

I finished the build and the survey. Pages 5 and 6 got me feeling like I fucked up somewhere, lmfao

I think I wanna add that I really didn't like Jean and Kota playing matchmaker. I guess it's fine that they just wanted to nudge MC and Asterion in the right direction, but a part of me wanted them to mind their own business lol 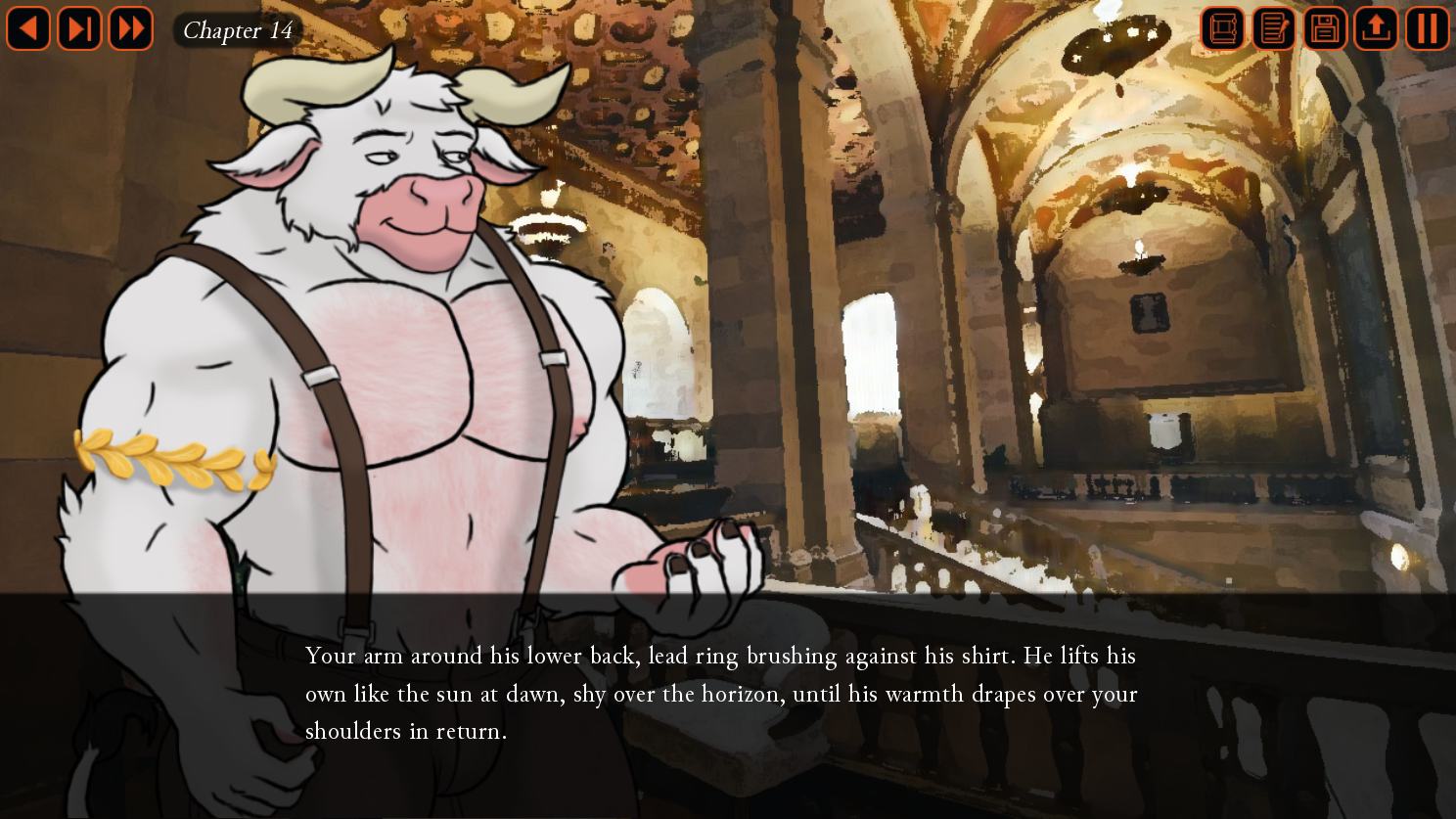 I think Hinterlands 3 dragged on a bit too long but at least Storm is cute as hell. P is also really good, I very much relate to all those intrusive thoughts...

The flashback to Asterion's sentencing was such a good part, really helps piece together Asterion's time living (as someone who knows next to nothing about real greek lore, lol.) I still don't know what happened to Laomedon and his father, though.

A small inconsistency(?) that bothered me is when you read the letter. It was addressed as being from "P" -- probably the peacock's grandpa -- but they act like it was Clement who sent the letter despite his name not being signed and MC's inability to decipher the entire letter. Even after they learn who P is from Themba, who I recruited first.

I also wanna know if the choice of god in chapter 15 matters.

Themba is SO handsome

So I'm 21 hours in and enjoying the game immensely still.

I actually kind of want to write an in-depth walkthrough for the game like what other old JRPGs get, and I've already gotten started, but I'd rather finish my first playthrough before really getting into it.

(spoilers) made a meme

Congrats on the release, looking forward to playing!

I'm a little late to playing this but enjoying it, thank you

I meant "designed by someone else and put in as a cameo," but I should have figured guest was vague lol

Just a guess, but is P a guest character? He's pretty interesting.

What do you think of Hades? Any inspiration from it? Or any greek mythology media in general. Curious after your devlog about minoh's backstory.

seriously tho thanks for ur work

Thanks a lot for making this survey, I've just started my own project a while ago, and this is very insightful. <3

After some time developing Blackgate, Bane started to put out empty updates to milk patreon money, sometimes twice in a row even.

I'm not sure if he still does that now (I don't even follow him since I lost interest before it started happening), but he's definitely gotten flak for it. 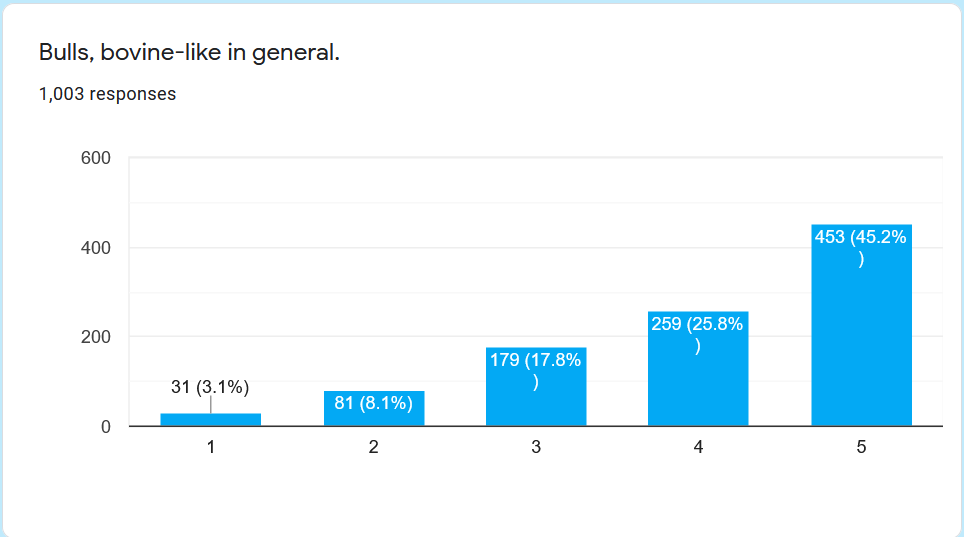 Greta is the true antagonist of Minotaur Hotel. She's that one coworker nobody wants.

Real talk though, great update, exactly what I was waiting for. Can't wait for more of big boi Asterion.  And more hugs 🤗

To comment on the R&D/Explore system: it's fine but I'll wait for more updates to it before completely judging it. I'll admit I was a little confused cuz I thought maybe assigning Asterion to Guests would get more guests in, but I don't think it had any effect aside from some dialogue changes. There is the obvious oversight of the dialogue acting like you haven't managed to set up internet when you already have. Also I don't know how Danger works, is it a random chance that increases with the number? Is 0 Danger completely safe? Is there a reason to R&D past 5/5 points or does it only count when the story requires you to research something?

I do think the lore drops are a nice addition, I'd like to read all of them eventually. Though it's easy to "reroll" and see any one you want by saving and loading right before the point where you obtain the drop, but that's not really a big deal imo.

I replayed the game from the start for the first time since Build 0.1's release over 200 days ago and it was nice to renew my interest in the game.

Asterion's interactions with you, the environment descriptions, the guest scenes;  the level of detail in the writing (that I didn't miss any of because I'm a filthy script reader) is just lovely, honestly. My favorite part is probably all of chapter 5.

I think this game has great potential with more content -- I'd personally compare it to Adastra and Echo. Among all of the visual novel projects I follow (several of which are also pretty stellar) this is what I'm most excited for more of.

1. I like the other suggestions, honestly. Maybe a jacket or coat?

2. I thought about it, thinking Asterion was exaggerating or that I could mediate between him and Argos, but decided not to go with it

I haven't commented before, just wanted to say nanoff is doing a fantastic job and i'm super excited for this project

Kol and Razix routes were nice, and Zed is my fav <3

Definitely will try reading the books too.

I played this for Halloween, was a great and interesting game and worth the money