Sorry for necroposting but I apologize for the naivety of this comment. Please never try to include all acts, for the sake of your mental health and time management. Your game is very impressive for what it is.

Hello! Recently I released the first entry of an ongoing passion project of mine called Voiden;Scape. It entails the story of a swathe of extraterrestrial teenagers living in urban, other-planetary environments. It may not be very long now, but I plan on having it eventually reach one thousand pages in length. Don't like reading? I strongly believe that a very positive effect of interactive fiction is getting gamers who don't really like reading into reading, due to the various modernizations and similarities interactive fiction has with actual, conventional videogames. Don't let your dread for reading get in the way of trying out interactive fiction! On top of that, it wouldn't hurt to make V;S one of the ones you try.

As for the story, I don't want to reveal too much, mostly because it's an enormous part of V;S.  I'll just summarize what it's going to be subject to here: the fourth wall, metaphysics, mental illness, narcotics, loss, & science fiction. I'll also explain the unconventional means of commands and updates: rather than making traditional commands the player can select, there are hyperlinks in each update that direct you to a Google Form where you can submit a potential command. If I like it more than the others, I'll use it!

I plan on updating quite often on no designated schedule. If this does become an important part of my life, or if it gets some kind of small community, I'll make one to make things easier on both me and the players/readers.

One last thing. I plan on including quite a few secrets later on, and if I do, they will be very well hidden. These won't be minor secrets, either. Some of them could point to entirely different endings. Be nosy if you're suspicious of a paragraph or a line of text. Those are for later down the line, though. As of now V;S has none because it's only two updates long. 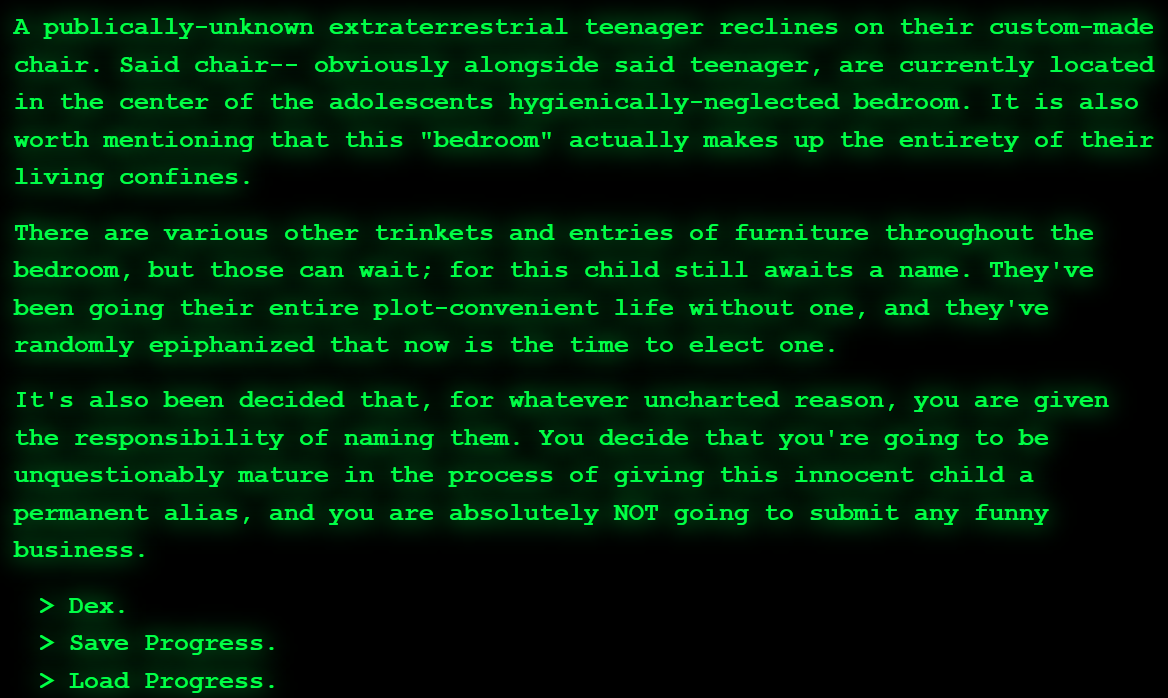 This is the first story page of V;S. The "> Dex." Is the response to the question that was chosen out of the other ones
Reply
Frog Fractions: Game of the Decade Edition community · Posted in how the frick do i get past the text part
hazardly50 days ago

The AI that predicts your actions is actually quite intelligent. Write whatever actions you want to do. If it doesn't work, be more linear. For example, if you want to climb a ladder type "climb the ladder" or something like that. It requires quite a bit of attentiveness, so just be on the look out for tiny details and always be suspicious of the furniture around you-- as if it might be hiding something. If you're stumped, you can find guides online with relative ease. Sorry for the late response.

I listened to your music and it was pretty good. If you want to participate with me and another person (he's a coder) in the game jam, contact me on Discord!

Reply
Beginners Circle Jam #3 community · Posted in I will write a text adventure/game with unique, quirky graphics
hazardly62 days ago

We have a programmer! Now we need a sound designer. The programmer suggested a game with visuals so we could probably use an artist, too.

Cool! Send me a DM on Discord if you'd be interested in doing the game jam with me. I can do all of the writing/worldbuilding. We just need someone who can do sound work.

I can help develop the main storyline and I can write all of the dialogue, characters, item descriptions et. cetera. All we need for a team is someone experienced with sound design and music, and someone who knows a basic way around coding; i.e. making a text adventure with multiple choices, and some basic CRT effects like scanlines, text glow, and some static.

Incase we just get a sound designer, we'll still be able to make the game, but I'll have to use Twine and I have no idea if adding those visual effects are even possible. I have no clue whatsoever how to make sounds or music, though. Reply if you're interested in making a team for this game jam with me!

Do you think you code code a text adventure with some basic CRT effects?

Your music sounds great! If you'd like to make a text adventure team with me, all we'd need is a somewhat experienced programmer.

Do you think you could make a text adventure with some basic visual effects/quirks?

Looking to make a text adventure with someone for the game jam! I can help develop the storyline and write all of the dialogue, characters, item names and descriptions, ect. Looking for someone with basic programming skills-- or someone just very experienced with Twine or any other text adventure engine, and someone who can develop music!

This game is extremely addictive. If you could, it would be awesome if you made a multiplayer version.

The game is great, but it'd be rad if I could fullscreen it. It'd also be cool if all acts were included. :D