Now there are even more sounds, I tried for a long time on this pack, no matter what! It would be great to hear your opinion and feedback!

Of course, you can use all the material!

You can use it, its free!

Thank you very much, I really appreciate it, I would look at your game, I think it will be great! 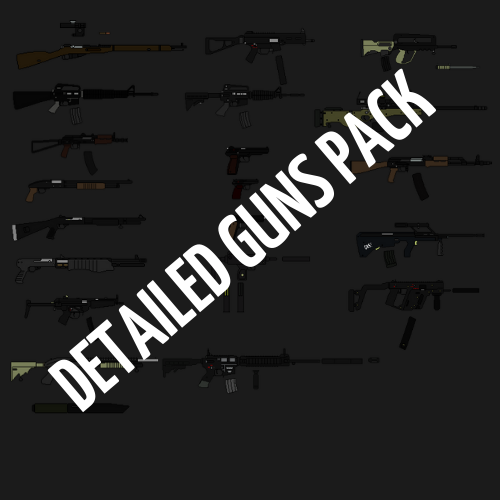 Pack with guns that I have used in my projects at the moment (All sprites in the format .PNG with alpha channel). The package is drawn by me and it will be updated. It currently has 15 weapon models and one knife, all of which are shown in the screenshots. The following weapon models are planned to be added:

1) This is not the final list of weapons, it will be updated and changed as new guns are added.

2) Why are there so many Russian weapons and so few others? Because I understand it better and first wanted to add all the famous Russian guns, then all the others (they will be much more).

3) If you want to add your own gun (you want me to draw it), then write your own version in the comments to the pack.

4) There will be more knives (and axes with shovels).

5) I do not know foreign weapons very well, I try to add more details, but you should understand that there are different variations and body kits, sometimes it is not possible to learn everything.

Packaging with different 2D effects (30. png spritesheets). It also includes projects for Pixel FX Designer (17 .ppd projects), which allows you to change sprites at your discretion or just get inspired. If you want to create FX for yourself, you can write to the email address that is linked to in my profile. Enjoy :)