thank you and stay tuned for the update, i have big plans for it :)

ya i don't think this was supposed to happen.

i only wish if there is WASD controls

i stood above the printers before they spawn , and they spawned above me, and i clipped through the wall XD 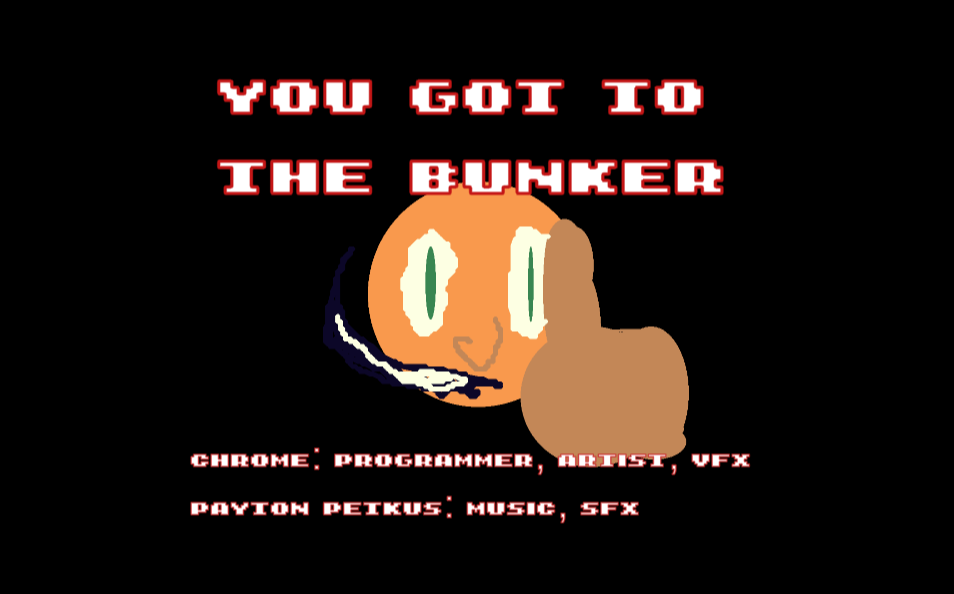 although something that wasn't very clear was the coffee, i didn't know it speeds me up until i hit it by accident, it would be awesomeif you can add it to the description :)

yea i noticed it way too late, but it's fine am still working on the game and i fixed most of the movement issues like jumping and throwing,, etc

i will make sure to fix it post jam :)

i'd say next time just try doing something and the idea will come to you by itself, you don't need to think about it to get it, if you make something and play with it a bit the idea can popup to your mind!

very cool parallax effect, cool jumpy cars with a bit of balanced rng, the music is cool, but the death sfx is soo loud that it can make my ears bleed :'), the art is nice, but sometimes it's inconsistent at times, the car and the coffe look bland, while the player character has much more details in him.

oh and btw i think there isn't an ending for the game, but if there is i wish if you can add it to the description so at lease i know what am trying to reach (i reached 1100m and while i expected the bunker to be in the 1000m, well it didn't and it kept going for 1560m tell i died )

still very fun game to play for a couple of times, good job!

pretty cool game! beautiful art, the music is a banger, and no technical issues at all!

the system may seem simple at first, but organizing yourself to be closer to an object than another one & not doing the long tasks when you might get a white on before you finish is a real strategy you can use!

sound effects are funny and cute, the video game one is very awesome :D (pew pew)

oh and lastly, funny references to other games, so that's an extra point there :)

The idea is very cool, art is very unique and feels sketchy and cute, a couple of problems i found was the animations (which you mentioned in the description), but the elements the player use were the major problem though.

Despite the fact that there wasn't much of events on the game, which meant there was a shortage when arranging the events, and some stuff were more preferred than others, such as the evening, it seems like everything happens at the evening and almost nothing happen in the morning, making me scratch my head on what to do ( and i ended up leaving it empty), the main main problem i was talking about was the control, it happens a lot when changing between stuff, that the game thinks i took something i didn't, and have something i already used,

for example, if i use a chair, then switch the chair with balloons, the game might break thinking i am still using the chair while am using the balloons, it's hard to explain but if you try to switch items a couple of times you will see what am talking about.

overall. the game has a very unique idea, the art is very pleasing even for it's simplicity, audio... well u said u didn't have enough time so.

The game would've had a much better experience if the main controls of the game were refined, and u added the audio with some extra polishing, i would've gave the game a full mark!

keep it up, you do have a talent!

the game looks cool, unfortunately the game lacks a lot of stuff, the exit is not visible, is looks like any other wall, the item (tourch) seemed like a background object, until i realized there isn't much else in the room i tried picking it up, the dark room wasn't very hard due to the room being so small, so there weren't much of a challenge, the silent audio was quite.. well..(not very innovative), but let's say it's to match the scary feeling of being alone in a dungeon.

anyways, the game does not offer much to be able to judge, i believe this is your first jam isn't it?

well i can give you a point for having no bugs on the game, keep up working, and you will get better over time!

i hate how slow the roomba moves, it's very hard to build momentum, i just got stuck after i destroyed one roomba, after that i had to fight 2 and i couldn't attack any of them, and they couldn't attack me. again, bcz of the momentum.

the art is pretty good, but you should add a fullscreen button bcz i can't see anything since the game window is very small

the audio is very repetitive, it sounds like a 10 seconds looping over and over

overall, not the best game or the worst game, kinda sets in the middle, keep up the good work, and make and playtest more & early, it's very useful thing to do (and am not a smart person, bcz i don't follow it...  and i hate myself :) )

Hi there, really cool game, I liked the way that the thing did this while the other guy went like that. for the art... 1000/10, and for the music, infinity. If you wouldn't mind doing so watch out for mistakes including when the thing does that thing

don't worry everything on this game will become better after the jam, i already reworked the movement and a bunch of other stuff, and the game might be completely different in the future

and of course the camera will get a heavy rework, so stay tuned ;)

this game kinda puts you in flow mode,

once you deflect an attack, you enter a flow mode to deflect the next one, just like a rhythem

if you missup one deflect, you will probably not deflect the next one,

it's weird to describe but the enemy patterns really puts you in such a situation, and i gotta be honest in here, it was awesome!

from art to mechanics, nothing is broken or unbalanced, the only one down point is the when you die there is no sound effect, am pretty sure the death screen is inspired by sekiro, which is pretty cool, but with a sound effect it can feel much stronger and better.

nothing should hold you from playing this game, so go play it.

yea am reworking the normal jump for the post jam version, and yes the very low gravity is indeed a bug, but i gotta admit as you said it was very fun to play with, i might just make it an item in the game.

i can hold everything small, but i can't hold the vacuum cleaner, even though it's small... 0/10

no but in all seriousness great game, i even cleared the room in a very special time!

truthness is the key, sadly i don't have a door...

i guess that will go to the ToDo list XD

it was in the hour rush when i made the tutorial, sorry about that, diffinely will be fixed post jam.

the mechanics of the game are not vey good, the game broke once and dspiders stopped spawning, sometimes spiders can move through block, sometimes u can't place the tetris blocks other times u can place blocks above others.

the art is very pleasing and the music fits the game, only if the mechanics worked as intended this would've been great

noted and will be fixed in the post jam version

am thinking about adding different effects for each area, so when i do that i will keep in mind the bloom effect

secret button that i forgot to delete :)

hey i am a C# programmer, i use unity and i am bad at art, but great at programming! :D

i think we can make up a great team

maaan that is a lot of levels, and even more, they are really great

i can't believe you hagve only 13 votes

as a NON - musician, i gotta say, i have no idea how to figure out which is which.

the mechanic of picking your parasite in the beginning is really well done, that was great

you can walk on the air :D

well i see now why ppl say it's hard

i see the reference, #RealLife_Virus_Chasing_you_even_in_games

Great game! although the cactus collider is a bit weird, and you should've increased the look ahead value in the cinemachine since the screen is a bit small, also the shotgun is stronger than the rifle :)

oh boi i got the "Secret: first try"

and man a lot of dialogue, but it was worth