what about this bro?

Gotcha! I found the last artifact and flew away)

Add more than one haunting alien)

Very good exploration game) what did you use for scripting? native c# or playmaker?

Also, the rock in the begining i'd found...

Sorry Laura, I haven't money to pay for this work, I wonder to find co-creator, so if you and your team interest to help "for free" - write me to zivfest AT gmail.com -I'll be glad to ask any your questions

I'm interested in finding a brave and creative modeller to help me create an FPS quest about space, aliens and science - a story about the SETI system and an engineer who finds himself alone in an observatory under strange circumstances.

The action takes place on an island, and I need help with models - the main building, the observatory building with radar, the lighthouse, and elements of the "underground" level (walls, stairs, pipes, and some decor).

I have a model of the main building, but it needs to be finished (or redone) and textured. The rest of the models do not.

The rest of the map buildings and scenery are done, I'm working on the mechanics of the story.

I would be grateful for help. 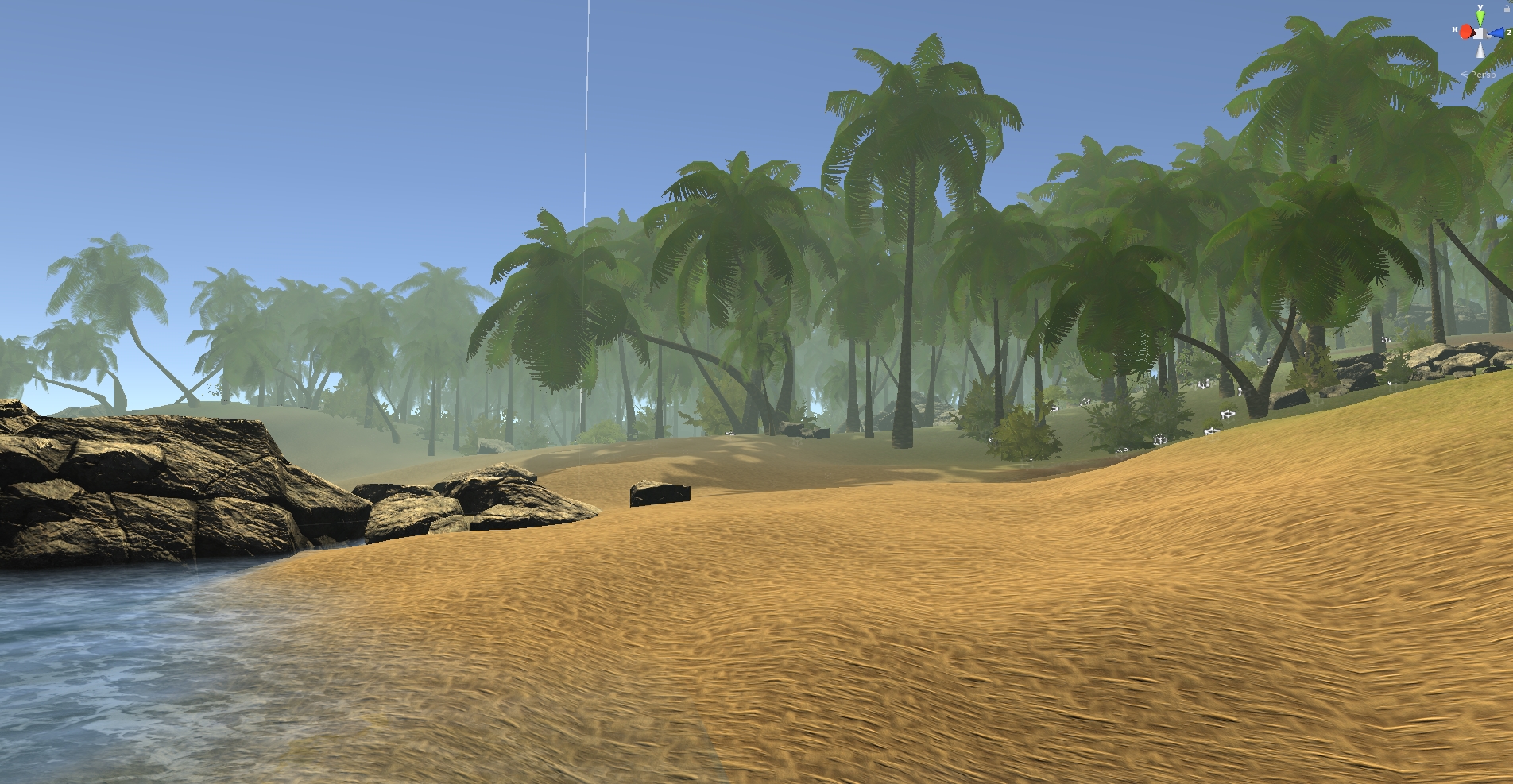 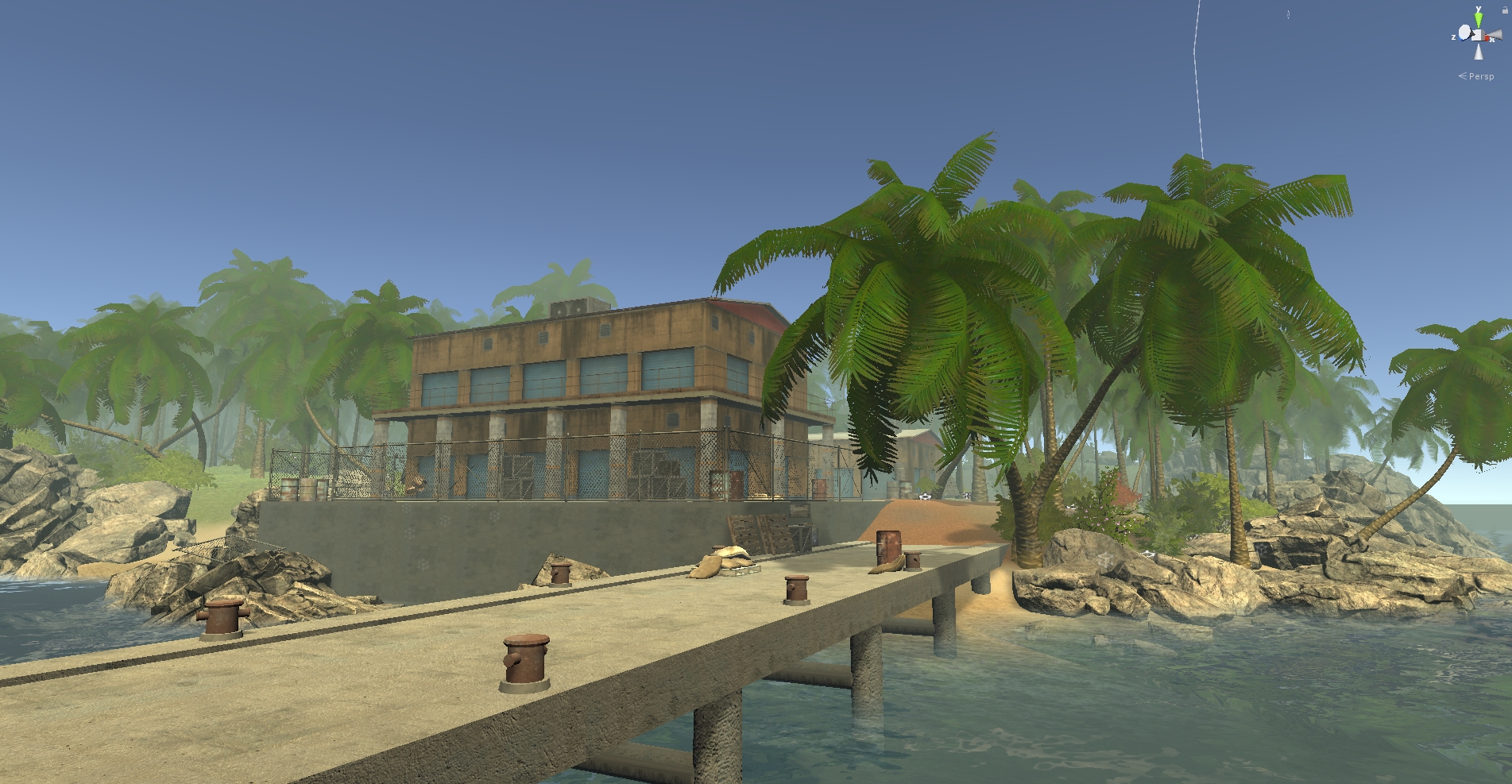 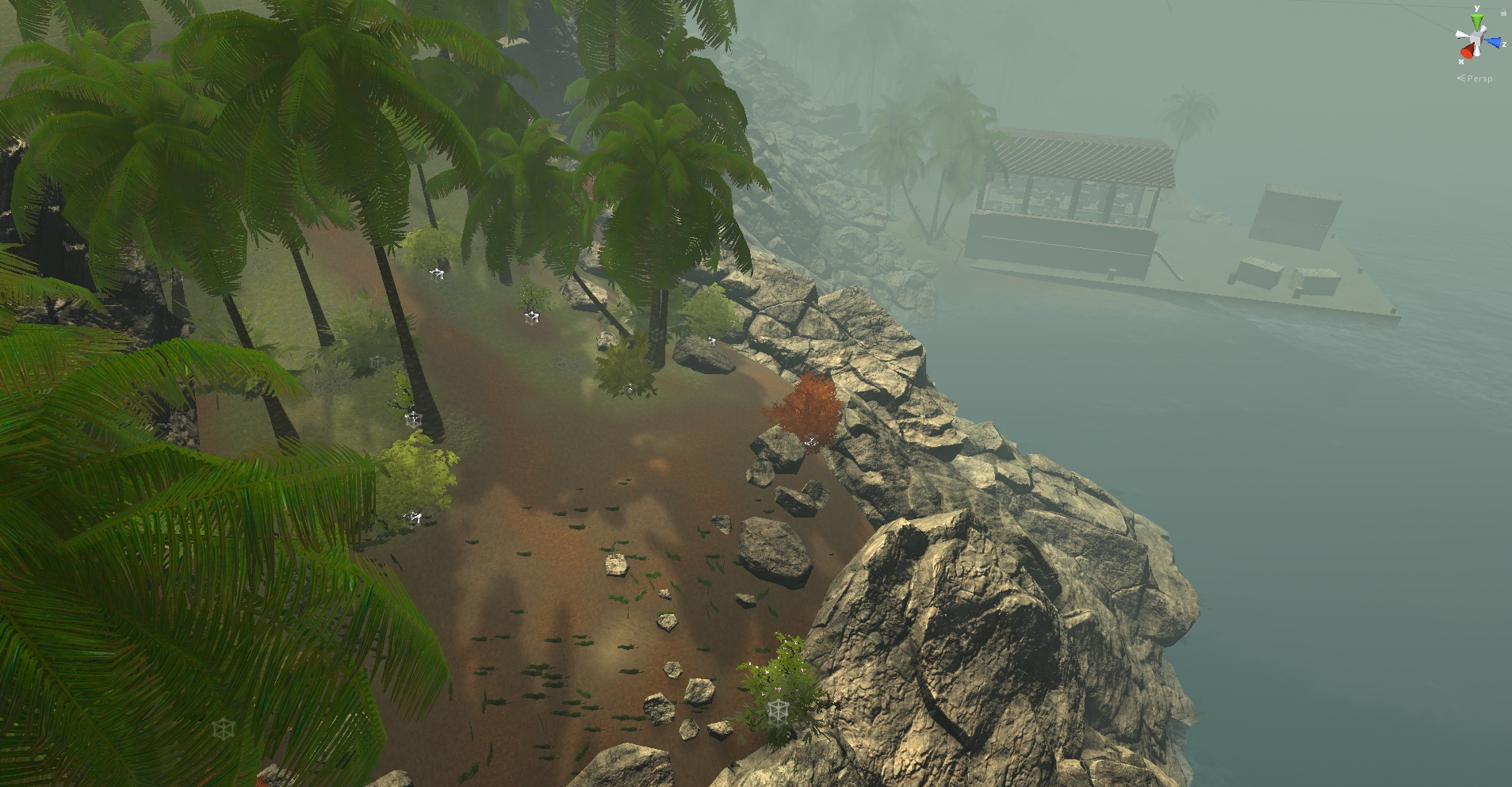 very atmospheric but what the end?

I found alien plane, human statue, magic book, magic frog and ruins - but what the end? What I need to do?

Add some phrases to hero like "COME ON GIRLS LETS DANCING" and more weakly nearest range enemies. For more fun and flesh!

The protagonist of the game is sent to an island in the boundless waters of the Pacific ocean to the Observatory, for restoration work - shortly before, the radio telescope that tracks the reflected echo of rapid gamma-ray bursts from distant star systems, failed. However, the island where the Observatory is located is not in a hurry to meet the scientist with warm hugs - despite the tropical and Sunny climate, the atmosphere on the island for some reason causes a sharp sense of loneliness. And this feeling is only reinforced when it becomes clear that there is not a single soul on the island, and the Observatory itself is de-energized. As a result, under the lagging(due to lousy communication) recommendations and messages of an ironic colleague from the "big earth", the protagonist will have to figure out what happened on his own and restore the operation of the radio telescope.

The game is conceived as a quest in the classic sense - a linear plot and puzzles of the level "solve the key" and "find the right switch". No NPCs are supposed in reality - the player will be completely alone on a large enough island.
Among the features-the primitive physics of the surrounding world, which allows you to interact with objects such as boxes, barrels, boxes and other junk - all this can be dragged from place to place and drown in the ocean, throwing off rocks.
There are several main locations:
The first dock with warehouses - here the player will start his incredible journey. May be.
The second berth is a berth for the shipment of fuel for generators and batteries.
Residential complex - a small residential building for the staff of the Observatory.
The radio room and the radio telescope itself are the actual control panel for the telescope.
The lighthouse is a spoiler, but according to the story it is supposed to be the penultimate game location.
Underground electrical substation - a fantastic and small structure hidden in the depths of the island, and responsible for powering the radio telescope.
Construction yard "almost" not involved in the plot location.
The ultimate goal of the game is to restore power to the island, start the telescope and follow all the instructions of an annoying female voice from the tube. I plan that it will take about an hour of game time. Or something like that.

It's a Unity. And this is mostly a game dev experiment on this engine, since I haven't done anything on it before. I chose between Source SDK and unity, but Source lost because installing its SDK is a separate gem, and I don't want to do an addon. Although graphic part of Source Engine impressed me more.

All models are either free from the asset store, or they are made by me with my paws in Max - you will need to make the actual residential complex, a lighthouse and a radio room from the upcoming ones. Of course, these will all be interior buildings, so how long it will take me to file them down - the devil knows. I've never done much modeling, either.

Especially worth noting is the fact that the entire environment is done manually - no procedural generation and painting the landscape with brushes(as is possible in Unity). Each tree, bush, and stone is set individually by hand. With love, of course.

The filling of all this is certainly not programming. Because I have never programmed, and I did everything through the good old GUI. In this experiment, I did not change myself and connected Playmaker to the project. So far, the tool is showing itself well, it was able to file interaction with objects (lift-transfer-release) and damage from falling from a height. There is an opinion that all other simple things like code locks or switches can be done with the help of the Playmaker.

I do all this because I like the process, because it's a rest for the brain, and because I love the Universe. I don't know when I will do it myself, but the landscape is ready for 95 percent, now it only remains to make three buildings and then there will only be "scripting" of the plot. Well, the voice acting of course.

Сute and simple polygonal world and dialogs make this game charming. I remembered halo, half-life, unreal tournament 2003, quake4. Amazing work for a single developer. Its AAA-Indie game even for 2020)

I wonder, what the engine of this game?

real relax. not game. it's like a cup of tea in lonely saturday evening.
10/10
Add the endless or looped openworld where you need find as more places for meditation as possible - and this game will become real relaxing evening tool.

Please don't ban, i just try to find teammates from my country)

hi! would you interesting to create pc games?

omg! how u did the portal effects?

Hi all. I'm sorry for my English, it's not my native language, so i use translator)

I'm looking for programmer/techical specialist to collaborate for creating short game about SETI - the program of find extraterrestial life. I'm a designer and can everything except coding.

The game is the first person adventure about a process of searching for signals from space. The player is located on a small island with 3 huge radars. The player's task is to choose the coordinates of listening to space and monitor the incoming signal. If the signal seems significant-the player needs to press one key and the signal is saved and go to the research center. At the same time, sometimes a radar can fail(electricity is lost or something needs to be replaced) - and the player needs to move around the island between radars.

The game is not supposed to end, the signals will be generated randomly, and the search coordinates will be taken from real space directories (for example, the messier directory). Moreover, the game will be played completely differently if we can add in-game chat with other players of the same type (the player will be alone, but will be able to correspond with those who are playing at this moment. It turns out such an in-game working messenger).

I'm looking for a programmer(and possibly a Modeler) who can implement:

1) a simple interface for setting coordinates for searching(i will draw example of interface);

2) a simple interface for displaying signals (I'll draw what it should look like);

3) simple mechanics for fixing/turning on generators and something like that.

4) in-game chat (shared by all players).

5) Perhaps some simple transport to move between radars. I will also be happy with the ideas of events that the player may encounter on the island.

I think the best solution for this is Unity. I can draw all the screensavers, menus, I can design the island, find and select all the sounds, write music, but I need someone who will not be confused by my English and who can program such a game. I will also be glad to modelers who can make some thematic content for the game like a huge radar.

Reply
itch.io Community » Game Development » Help Wanted or Offered · Posted in [Unity and C#][Programmer][Game Artist][Free]looking for team or solo man to collab and work on project ts
Fakov1 year ago

I’ve a simply 3d game idea, but i can only level design) if you ok to manage programming and technical part of developing(you may say how to right set unity collaborative workspace) - i can create levels and other stuff(not coding)

Also - u need to be ok for my “rednek“ english, its not my native language) but also i can translate game into russian!)

Reply
itch.io Community » Game Development » Help Wanted or Offered · Replied to Mikeeyy in [Godot][Programmer] Looking for anyone/anygroup to team up and make a game for fun
Fakov1 year ago

If it possible, I think it would be interesting to make a game similar to a custom map from Warcraft 3 with very simple gameplay, where every player choose builder, who may build  "towers" or "buildings" of specific types, which spawn every N second creeps. Spawned creeps goes to attack enemies castle and also - have a limited life time. Simple game map looks like this, but it possible with two, one or four lines. I think it may be attractive in lowpoly, and it's easily to find necessery models (i know some assets from Unity with creeps). Also, I am have a little expirience in static modeling with 3DMax, so some building i could create).

Btw i talk about that custom map for warcraft3 https://www.epicwar.com/maps/301468/

Reply
itch.io Community » Game Development » Help Wanted or Offered · Posted in [Godot][Programmer] Looking for anyone/anygroup to team up and make a game for fun
Fakov1 year ago

hi! what kind of game you want to do? What the type and genre?

i wanna more this game o_o

damn it's a very incredible and simple idea.

Reply
itch.io Community » Game Development » Help Wanted or Offered · Created a new topic Looking for a team who may interesting in my idea
Fakov1 year ago

I'm looking a team or single specialists, who may interesting to create custom Warcraft3 Map as independent game.

I think it s really possible to create this mechanics even for singleplayer. But, I have no experience in Unity and any programming language (all my background is Construct2 and different games' editors like worldEditor or Source Hammer).

But. I just don't know programming language, but I can create another things - like simple scenes, static models, sound/music, texts. So i'm looking for a great technical support for that idea.