Escape From H1-MA Station
The deadly frost blast will reach the station in 30 days. Phi must find a way to escape from it.
nuttatulipa
Visual Novel
In Good Company
Four associates are suddenly stopped in a snow lodge on their way to a celebration.
Cynthia
Visual Novel
Magical Mystery Cure
Craft the right potion to restore your girlfriend's face back to normal!
dotoriii
Play in browser
My Demon Date
A short visual novel where you go on a blind date with a succubus.
dotoriii
Visual Novel

Hello! I was the resident artist for Escape From H1-MA Station which meant I was responsible for drawing all the BGs, CGs, and character sprites. Nutta actually approached me on discord with this game idea about a young engineer living on an old & cold space station while trying to escape to a warmer place. I've always loved designing all sorts of characters, so a project set on a space station where aliens, animals, and humans alike lived together absolutely grabbed my attention.

This time around I was actually the artist for 2 games (check out In Good Company by Cynthia and me)! It was definitely a lot of work and I learned a lot of useful things from both projects that I hope to carry with me for future projects. Let's move onto the actual post-mortem now!

When we officially started I knew we were working with less time than most folks due to our late start, so it was really great that Chetav and Nutta had already gotten the setting, gameplay, and even characters down. As we were planning out the game Nutta made a very helpful style moodboard (which you can find in the first post) to help with art direction. Chetav had already written up character descriptions as well which gave me a foundation to work from for designs, so I spent some time sketching up roughs for each character. 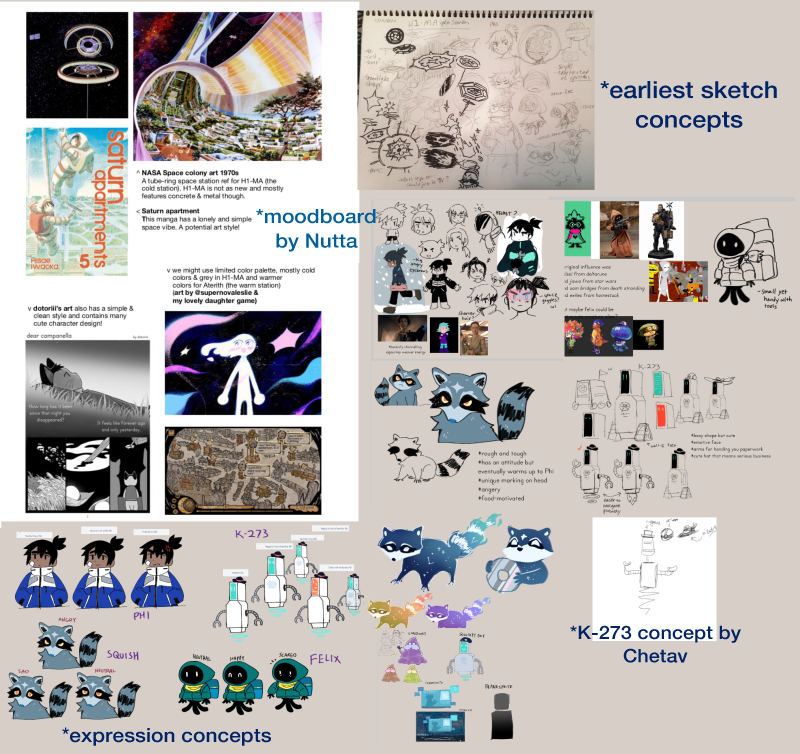 *Fun Fact: an early idea I had for Squish the Raccoon was for him to be a spectral being with a fiery tail. But we decided it would be funnier if he was just a regular raccoon in a space station terrorizing Phi.

K-273's design was  something I was a little stuck on because designing robots is unfamiliar territory for me. So I did what I usually do when I'm stuck designing something and look outwards for inspiration. I talked with Chetav and Nutta about different robots from different media and how they're shaped + express themselves. We wanted to strike a balance between human-shaped, box-shaped, and expressive. Even though K's end result is simple, this moment stuck out to me because I truly love when we can work together with influences/inspiration to create something new.

*Fun fact: K's hat was totally Chetav's idea and I loved it so much I kept it in the final design. We were gonna have different K units wearing different hats to reflect their roles, but we ended up scrapping it for time reasons.

Admittedly I struggle with color theory more than anything else and was a little stumped with how to go about assigning colors in the beginning. In a moment of pure luck and genius on Cynthia's (teammate for In Good Company) part, I found my answer! I was receiving feedback on my concepts for In Good Company and Cynthia provided a set of character color palettes with overall color unity in mind (something I never thought about too hard I'm embarrassed to say ahaha). I shared Cynthia's color palette to my teammates and Nutta provided a color palette for our own characters to work off of. 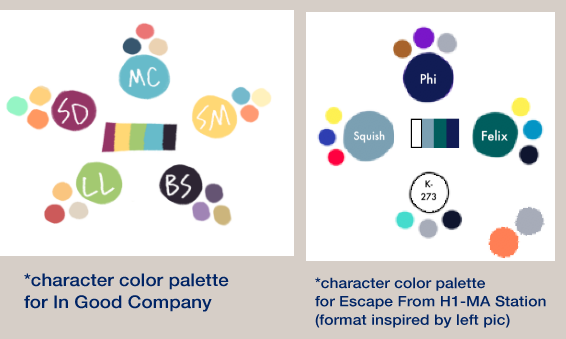 We went through a back-and-forth process of me presenting concepts to my teammates and receiving feedback from them. Even though we had very different characters, I wanted to keep some sort of unifying element for them (cool colors, futuristic look, cute design).  I kept them all fairly simple in case they needed to be translated into pixel sprite form, and also keeping them cute and simple meant I had more time for everything else (like BGs/CGs).

I actually had clear ideas for how our backgrounds would pretty much look like from the start. Colors would all be cool blues/purples/pinks applied using Clip Studio Paint's gradient map function (it's easy coloring + I like how chaotic the colors look). Again, I looked for design inspiration in different places to give myself some foundation to work off of (BGs are also something I tend to struggle with haha...). For Phi's room I was inspired by the layout of the MC's room from 2064: Read Only Memories. Chetav and Nutta had the great idea of basing K-273's office on Michael's office from The Good Place. And for Phi's workplace I looked at photos of abandoned, old factories. 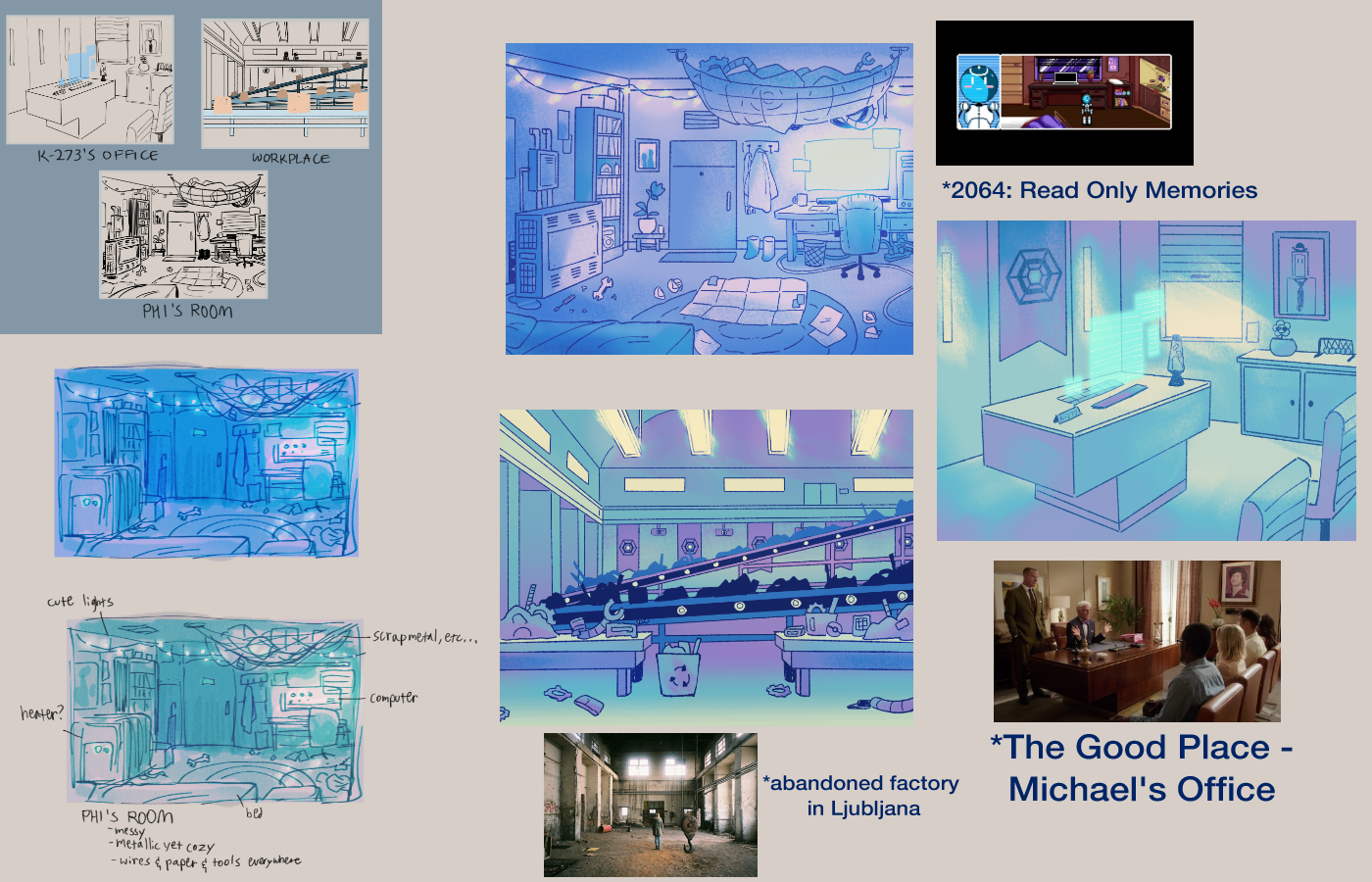 As for CGs, I worked closely with Nutta for those since they had a clear vision for how the title screen + end screen would look. I worked off of their lovely sketches they provided for me. 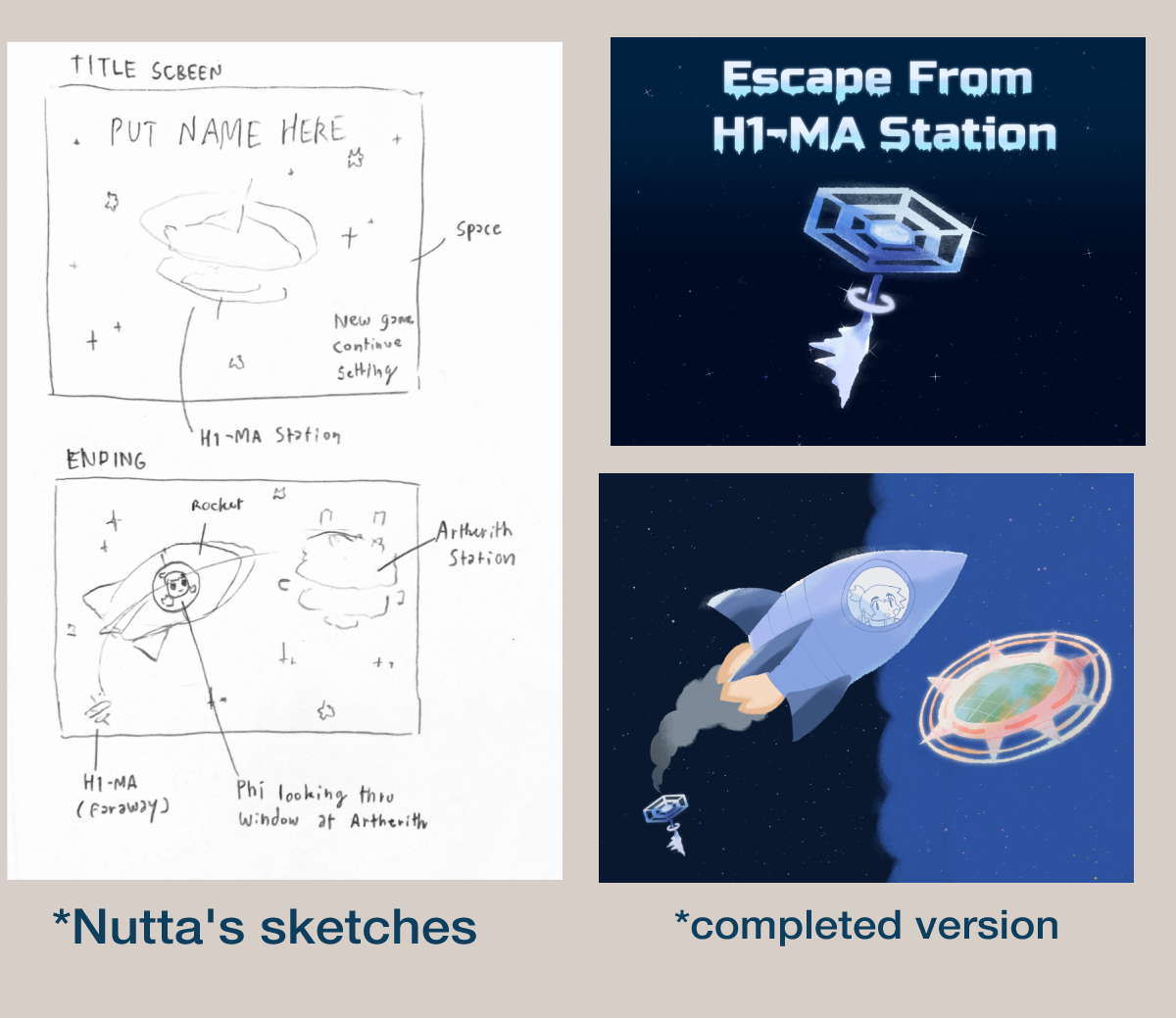 Overall, I couldn't have asked for better teammates for this game! Chetav and Nutta were both extremely helpful and kind and fun and amazing and awesome and had strong visions that ultimately guided how the artwork would look like in the end. Without their feedback and guidance I would not have been able to churn out as much cool artwork as I did. It was definitely a struggle to balance work between 2 games for this game jam and I learned some valuable lessons on time management and focus. I think it's amazing that we were able to work so well even with all of us living in wildly different timezones. I feel like I've come out of this jam a different, more focused person after going this hard for 2 weeks straight haha. Anyways, if you've read this far you get a prize! Here's a lil pic from me to commemorate our game's release. 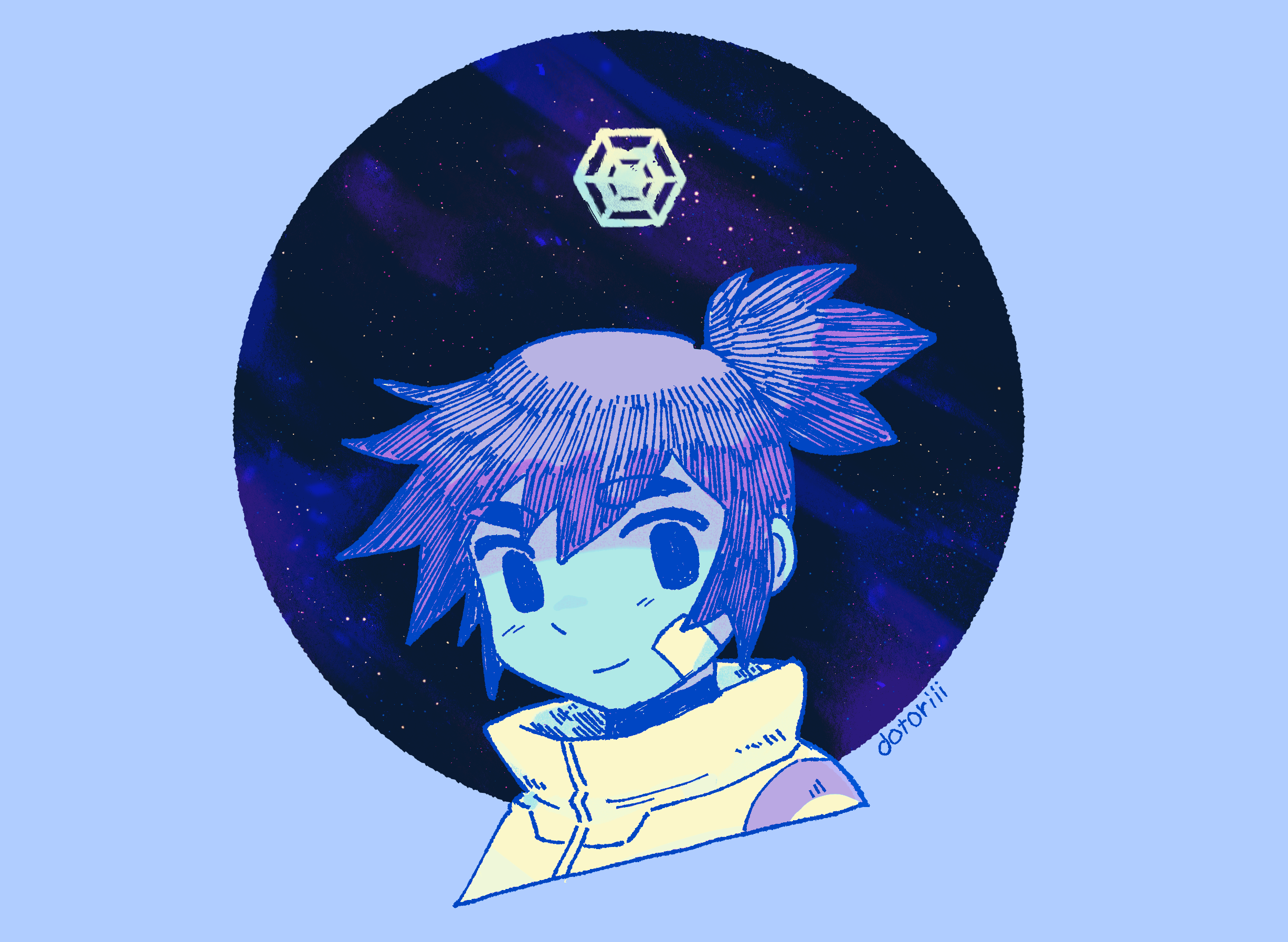 TL;DR - Chetav and Nutta are amazing people. I learned how to be a more focused & efficient artist. Our game is super cool and it would mean the world to us if you played it. 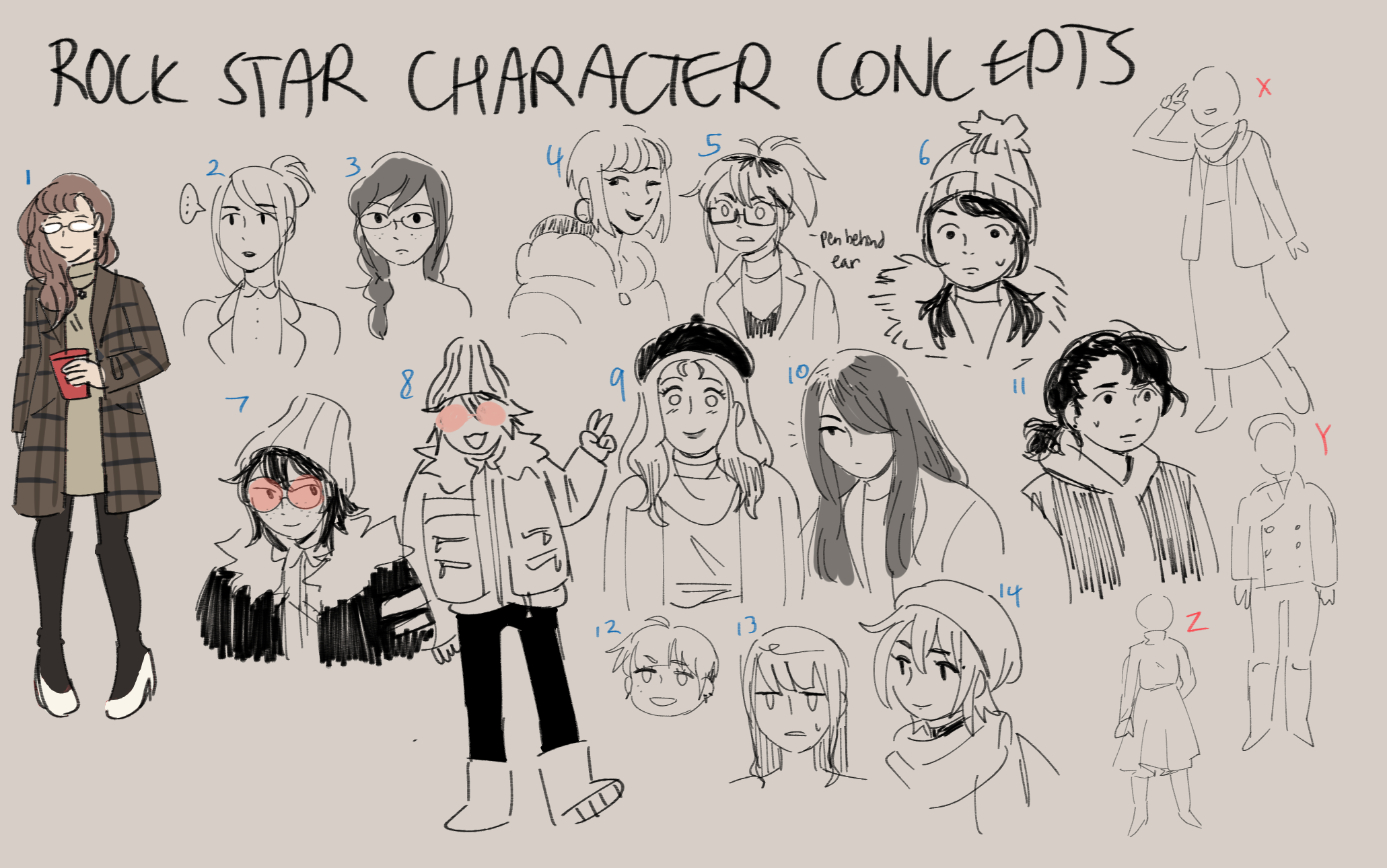 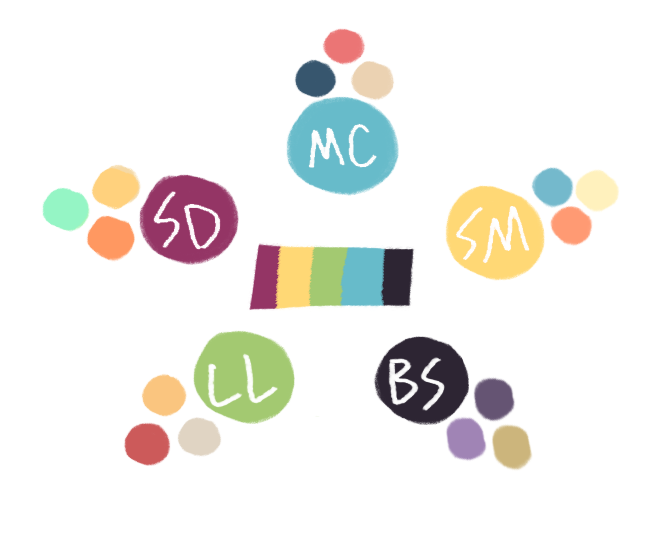 It was such a delight to watch! :D

Ohh thank you for making a video with our game! I loved watching this :D

Thank you so much for playing & I'm glad you enjoyed it :>

THIS GAME IS SO GOOD!!! I love everything about this! Especially the little decorations you can give to the food haha. Good job you guys!

oh my gosh I'm super late to this but this devlog is an absolute delight!!! any cooking-related games make me weak i love em so much. I'm super looking forward to playing this game!