After clicking "Download Now" you can pay what you want or select the option to get the game for free; afterwards you can download the right version for your operating system!

Sorry to hear that!
I think we've had similar issues like this in the past – do you maybe also have a game controller connected, by any chance? If so, you could try to disconnect it before starting the game and see if the problem still occurs.

Oof, I think I saw a similar issue on an old notebook one, which is why also assumed it was a problem with the graphics card, or some such... But that doesn't explain why you had issues on the other PC, as well.

Have you tried turning of "Post FX" in the graphics setting? Those sometimes cause problems, but otherwise I'd have to look further into it!

Finally finished polishing and published the game my team and I have developed for Global Game Jam 2020:

Scrap Race
A local multiplayer game for 1-4 players.
Build a wheel from scrap to race down a hill: The wheel to roll the farthest wins!

If you don't have 4 players, you can add non-player opponents in the settings, too!

Sorry to hear! What distro do you use?

Sorry to hear that!
What browser are you using? Do you have script blockers active, or some such?
Worst case you can try the downloadable versions!

Don't tell anyone, but if I remember correctly it should be in the corner right next to the door, on the side of the cupboard! ^^

Glad you like it! :)
And we definitely have considered it! At the moment there are no concrete plans to port it to VR, however; mostly because we curently lack the necessary equipment and making it VR compatible would require large rewrites of the entire game, unfortunately - but we'll definitely keep it in mind!

Thanks, again! It really means a lot to me!

Thanks for your awesome effort and the detailed feedback – lots of useful notes, here! :D

Thank you! We're glad you enjoy it! :D

Only the ones from the formulas to create the key ingredients, I'm afraid!

("?????" is just a stand in for anything that is an unknown/undesired result)

Sorry to hear that! Have you also tried deactivating all of the post-processing effects?

No particularly good reasons, tbh. For the most part, the Mac version is less tested and makes up a much smaller market share.

We can definitely think about uploading a macOS version with the next update, over on Steam! Sorry for the inconvenience!

Hi! In the same folder as the executable there should be that UnityPlayer.dll file; the exe and dll file need to stick together, otherwise running the exe won't work. If that file is missing, it has either been moved or removed (possibly by anti-virus software?)

Mhh, as far as I know, the game should be compatible with Windows 7 – have you tried both, the 64bit and the 32bit version?

Because there's the option to pay nothing. Above the prize input field there should be a link: "No thanks, just take me to the downloads"

That issue has been reported before, but we haven't found anything yet, I'm afraid!

What are your system specs? Do you have a game controller attached?

Glad you enjoyed it! Thanks for checking it out! :D

In the tutorial? You should find it in one of the drawers on the opposite side of the room - generally, always check all drawers and don't forget to look on the table tops (sometimes I miss the ones just lying around).

Hey, thanks for catching that - it should be fixed, now!

Something went wrong with the last upload, resetting some of itch's game configuration.

All models have been created in the indie version of MODO!

Ah, sorry to hear that!

What are your system specs?

Oh! That'the game's win state: When you have collected the three key ingredients, the "You Won!" screen pops up and the game is over. Was the screen missing, for you?

We are currently working on extensive control options/settings!

Until then you can try to use the F key, instead, which replaces both mouse buttons, but is kind of tricky, sometimes

Thanks for checking it out! We're glad you liked it! :D

Ha, oh, sorry about that!

Here's something you can try: The F key can be used instead of either of the mouse buttons (use and toggle picking up objects): This is still kind of experimental, but maybe it works for you!

Mh, doesn't sound too different from my setup – have you tried customizing the graphics settings?

Turning the post-processing effects down or off entirely usually helps a lot, in case of low FPS.

Yes, that makes sense, heh! I use QWERTZ myself, but lucky it's largely interchangeable with QWERTY...

So, you'd use ZQSD for movement? I'll be busy this weekend, but maybe we can come up with something, some time!

Not currently, I'm afraid – what controls would you prefer? 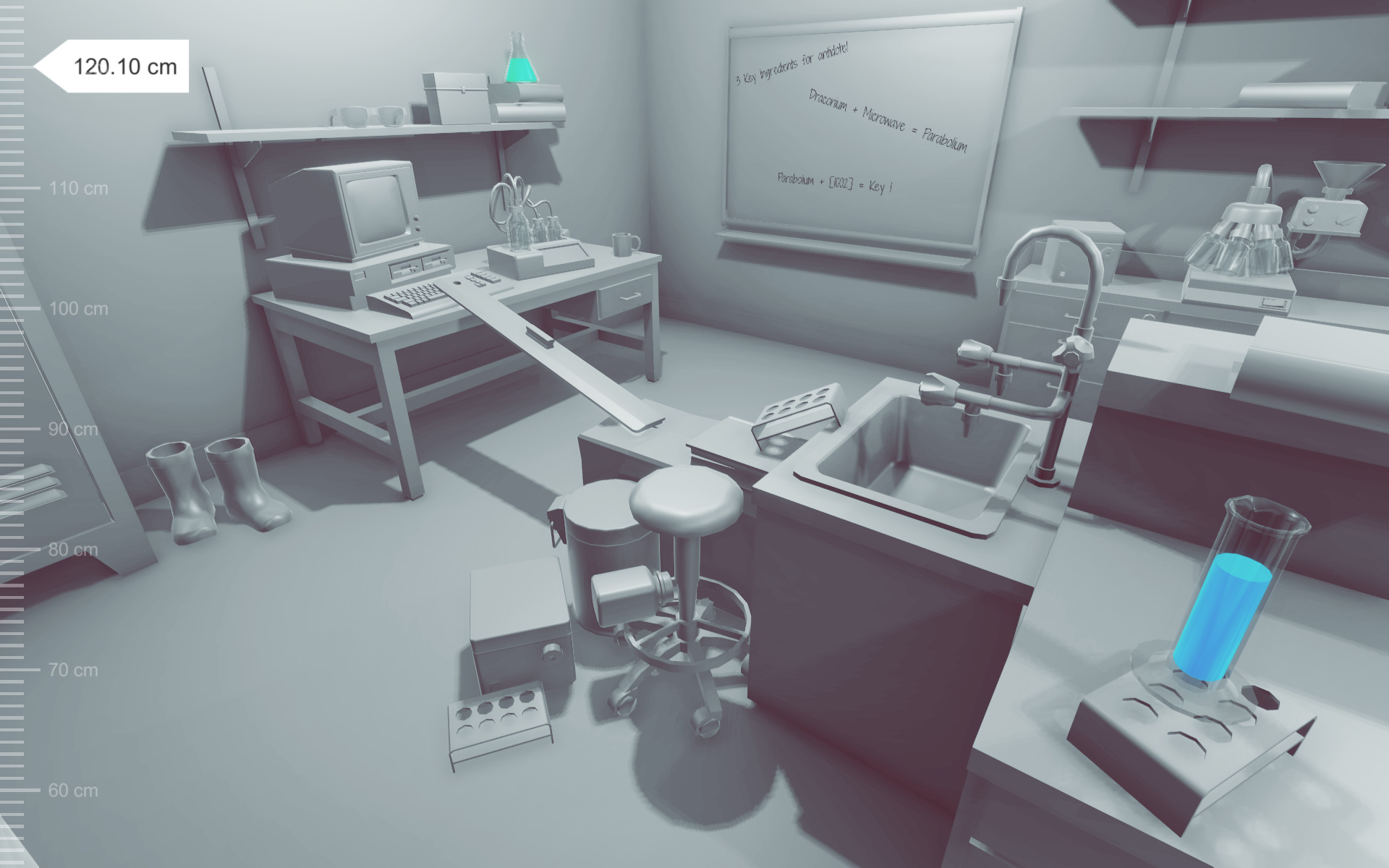 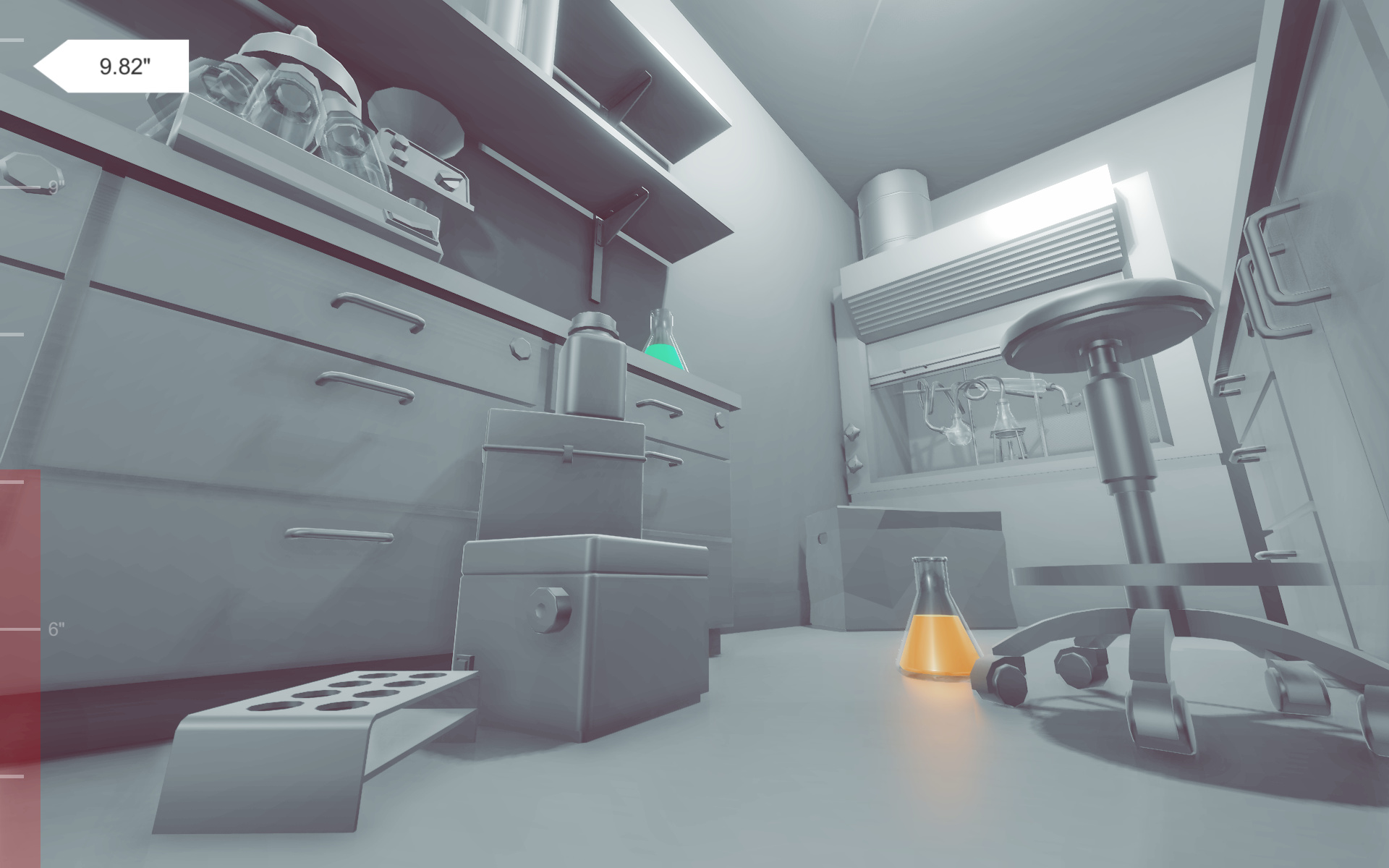 Inch by Inch is a first person puzzle platformer, where you play a shrinking scientist trying to create an antidote. Find the formulas and ingredients you need, before you are too small!

We forgot to post our game here, before, but we have now published our most complete release and think it's finally out of prototype status. We would love if you checked it out and let us know what you think! :)

Hey, glad you liked it! Thanks a lot for playing as well as your kind words and recommendation! :D

And I understand it's difficult to see from an outside perspective, but please take our word for it: The game corresponds with the jam's theme and rules perfectly fine! You can check the short discussion at the bottom of the jam entry page for details, if you like! :)

There already is a Custom difficulty option in the game settings, which allows you to tweak a couple of the game's parameters!

Are there any other customization options you would like to see in the game?