This game was honestly immersive as heck. I wish there was more to it!

If you ever wanna expand on the game, I could lend you some of my time.

I've got a few years of programming experience and I would love to see where we could take this game.

Of course! :) I should have a demo out soon

What about edits and such? Like re-coloring the sprite or erasing some pixels? The original credit will go to you, of course.

can this asset be used in commercial projects?

Reminds me of Fancy graphics from Minecraft :) Looks good. I'll for sure give it a try when I get around to that phase on my project.

Looks like a really good concept for a puzzle platformer. Some things I'd work on:

- Retracting the gum back takes a bit too much time.

- Jumping feels like a bit too precise, or maybe it was intentional?

The things I liked:

- The graphics were simple and pretty to look at

I'll definitely credit you for your hard work. All developers I credit on my game will be getting a free copy, anyway :P so thank you!

Hey! I was just wondering if you have any terms or rules regarding these pictures? Whether they can be used in free or commercial games.

Ooooh yeah the laser thing should've been a dead giveaway that there are platforms there I could jump on.  Well, I'm glad to know I wasn't stuck then.

Hey, Ayybaddon. I really liked the game from what I played. The graphics are simple and really beautiful in a pixely way. Combat was minimal but simple enough. It was clear you wanted to steer attention toward platforming, which was a good decision on your part.

I didn't end up getting to the ice and fire stages, though.

At one point I came across a room I got "stuck" in. I put stuck in quotations because I'm guessing I was lacking some kind of power-up or ability to traverse the poisonous pit and spikes seen in these two images. 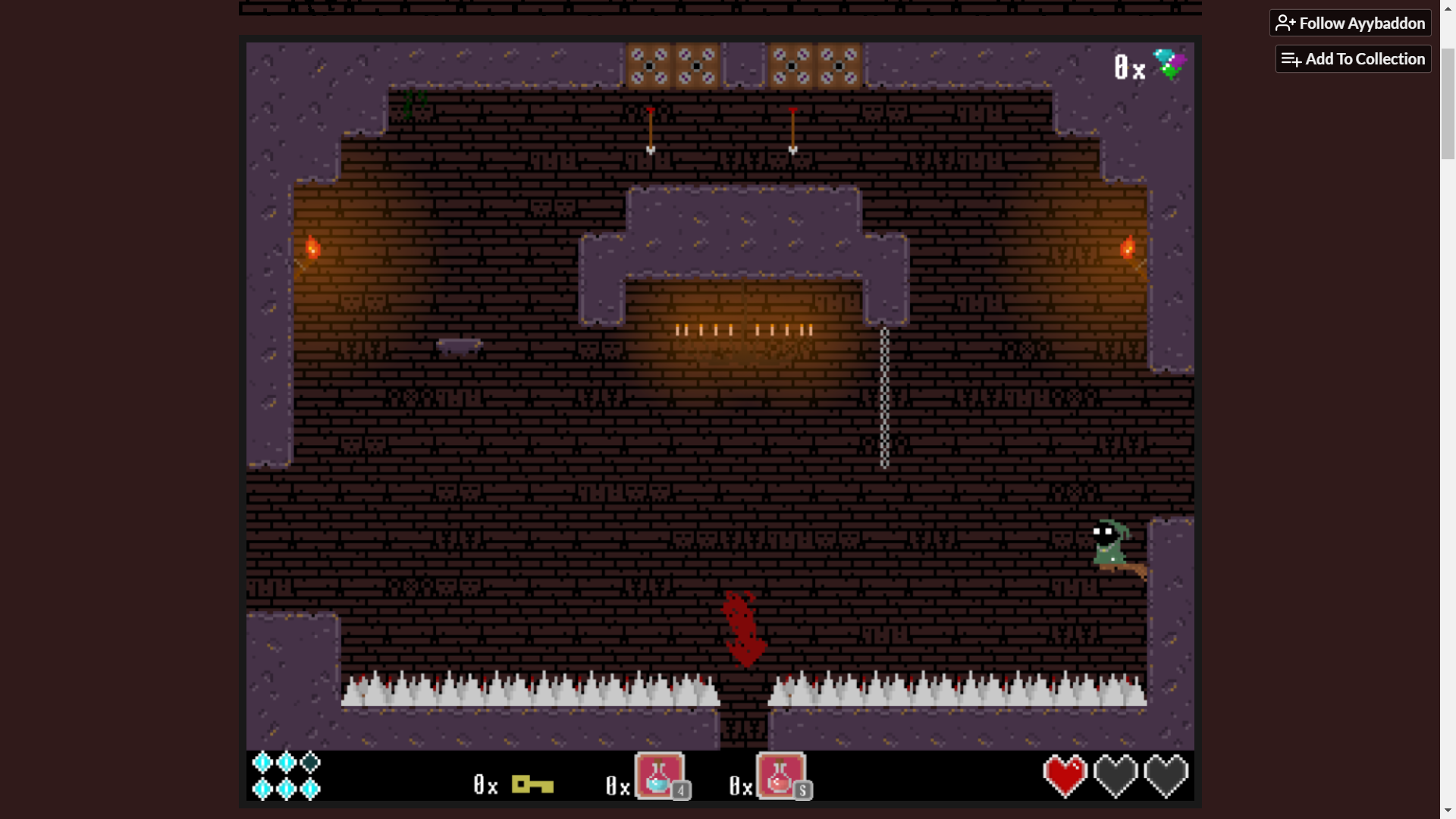 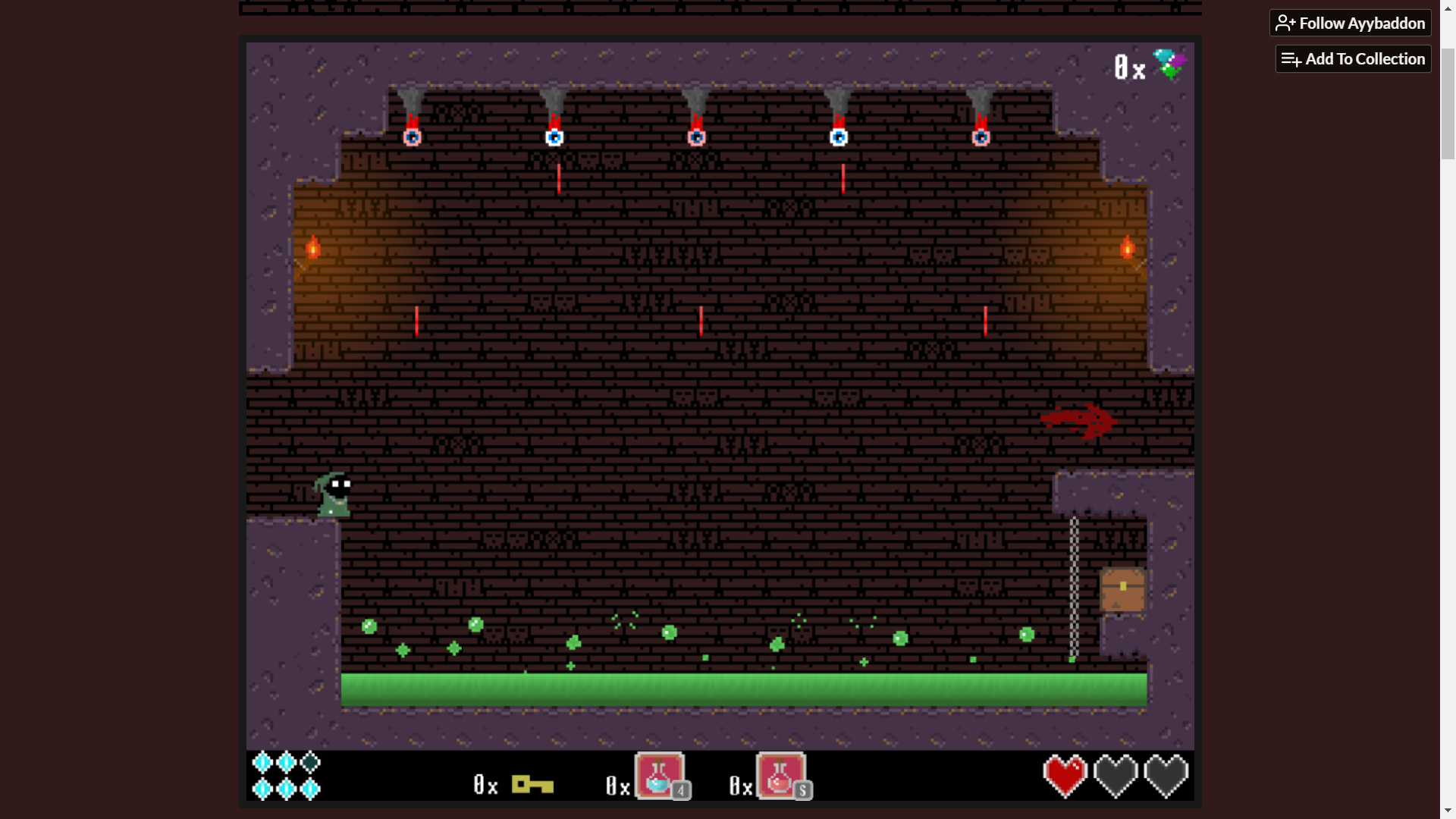 I only had a single jump, and the default abilities (the sword and fire blast).

What do you think it could be? A bug? Or is it an intended design choice? Maybe I'm just missing something.

A few other small things I'd add, would be feedback when hitting enemies (like having enemies get knocked back), along with sound effects.

Overall, great first game! Are you planning on updating it with new content in the future? Adding improvements?

It will be out on the 5th of September.

Exactly what Mr.Kitkat said: really good idea for a game. It has a lot of potential, and I'm gonna lay down some ideas for you. Feel free to incorporate them into any future update for the game:

- Have smaller, temporary torches placed around levels, and have your OneLight light them up with the click of a button

- Ghosts which react faster once they're out of OneLight's range

- If you're adding more enemies, it would only be fair to incorporate some kind of health bar into the game (like three hits and you're dead?)

- Maybe a jump mechanic to overcome small pits? Adding to the spike hazard

Overall, great job! I'll follow you to be aware of any updates you make on the game. Keep at it! :)

Hey everyone. The project I've been working on for the past year and three months is finally here!

Corrupted Oath tells the story of a wolf who sets out on a journey to uncover the truth about his lineage. A corrupt King stands in his way of total victory, along with the unethical experimentation tactics he's imposed onto the animals of the land.

Here's the link to the itch.io page: https://cracked-walnut.itch.io/corrupted-oath

The trailer can be found on the page, but I've posted it here for your convenience, as well:

Here's some quick images pulled from the itch.io page: 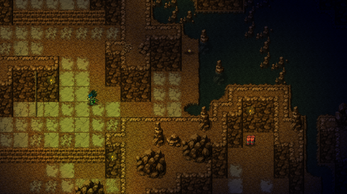 A lighting system built to enhance the visuals and atmosphere. 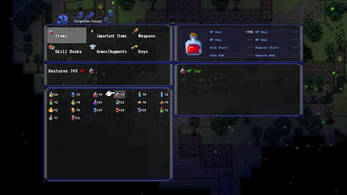 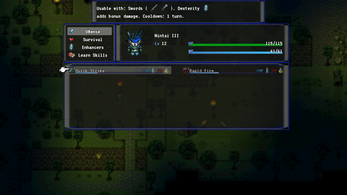 A skill learning system where using skills will grow them stronger and more effective.