Thank you so much! Haha Lootbox Lyfe has done pretty well, and I hope the same will go for The Outbound Ghost :) Glad I could inspire and help you!

My first Steam game came out a month ago! Still working on updates, but you can find it here: https://store.steampowered.com/app/1033780/Lootbox_Lyfe

Also working on a new one, which you can find here: https://store.steampowered.com/app/1276810/The_Outbound_Ghost/

If you try Lootbox Lyfe out, I hope you like it!

Ah well that's even better! Glad to see I could help you learn how to do it yourself :) And yeah sure, put up a video or something and I'd love to see it!

Ah thank you, glad you found a use for this :)

- Added an icon on screen that shows if you're using assist mode when in speedrun mode.
- Changed the wording of the crown hat to make it clear that you need to already have unlocked the ability it modifies to use it.
- Added torches/lighting to a late-game area.
- Made it so that the best pal hat also protects you from rolling rocks if they fall on your head.
- Fixed the spawning patterns of a certain late-game entity.
- Added Speedrun Mode achievement.
- Added Free Roam Mode achievement.
- Added achievement for beating the game with 1 heart and 1 checkpoint.
- Added achievement for beating the game with 1 heart and 2 checkpoints.
- Added an extra checkpoint in the final area.
- Removed an obstacle from the Garden that made it unclear if it was safe to continue further.
- Removed portal that lead to an end-game area in the base.
- Changed the layout of an obstacle in a dark world to make the use of an ability clearer.
- Changed how rocks work on collision.

Lootbox Lyfe has been out for over half a month now, and we've already got 2 patches under our belt! In terms of what's coming next, I'll have a patch with a few more tweaks and more keyboard layouts coming out in a couple of days. Additionally, the big 1.1.0 patch containing a new questline, and new NPCs will be coming in April. I hope you're excited for that! If you've been enjoying Lootbox Lyfe, I would really appreciate it if you left a review, those really make all the difference in terms of discoverability. Also, if you want to talk to other like-minded people, you can join the games Discord Server! Hope to see you there!

- Fixed a couple of achievements to make them obtainable.
- Fixed the in-game timer to make it not reset when going back to the main menu, or resetting the area.
- Fixed issue with hats and syringes that would make it so that when selecting one of these, they wouldn't persist until you hit a checkpoint or left the current area.
- Added collisions in some areas that previously missed them.
- Changed some UI alignment issues.
- Clarified wording for coins left in the map menu.
- Fixed dust particles in all cutscenes.
- Checkpoints now glow in the dark.
- Music properly loops in all menus.
- Some "trigger" buttons on controllers were incorrectly called bumpers. This is now fixed.
- Made the "select" button prompt be clearer, so that people know that it is the select button.
- Removed debug feature that I forgot to remove.
- Added Speedrun mode.
- Added Free Roam mode.

What does Speedrun mode do? Well, it's better suited for speedrunners! It adds a timer, removes cutscenes, and shortens animations!

Free Roam mode allows you to start the game with all abilities unlocked from the start. It also starts you off at the center of the world, the Base. Additionally, you can also use all of your powerups in dark worlds in this world! This mode is great for those wanting a fresh new experience for a second playthrough, or for you speedrun fanatics out there!

The same day that Lootbox Lyfe came out, I also launched a Discord server for the game! Ever since, many memes have spawned (Baregg in particular), and community members have already come together to break the game, and beat it in under 20 minutes. Want to join the fun? Click here to join the server!

Lootbox Lyfe is a Metroidvania with Movement Option Progression. Save your species through exploring an interconnected world riddled with platforming obstacles. Unlock new areas as you obtain new movement options.

The game costs only $4.24 due to the launch discount, so get it cheap while you can! Here's the link: https://conradicals-games.itch.io/lbl

Yeah it's mostly what's shown. Basically, you can put a list of commands, and the ability to run code once the confirm button is clicked on one of those commands (you get to choose the text, and the code that's run).

Really neat game. Recommend it if you enjoy story platformers!

Really enjoyed it! The sombre feel of the game is great, the gameplay is simple but engaging, and the music is also fantastic! Super awesome work :)

Haha yeah, didn't want to make an overly complicated tutorial room, and I felt like a human explaining it would probably have it be more understandable, so went with that instead!

Also, wow never ran into that bug, but yeah it looks like a cancel with right click or something would really help then, thank you for the suggestion!

Thanks for the kind words :) Also, saw your game played on one of the GMTKJam streams! Really enjoyed what I saw, will give it a try. Nice stuff!

Thank you! Already checked it out, thanks for covering all of these awesome games, we really appreciate it!

Thank you! Yeah I agree though, could have made the character a bit slower/have more control, but I still like the fact that there's a bit of a skill curve to the movement!

Glad you liked it! :D

Interesting concept! The walljump I found a bit wonky but that may just be me. overall, well done!

Really original, and love the bounciness of player 2!

Thank you! Yeah my intention with that was to add a sort of skill curve when learning how to move, so that when the player gets better it;s more noticeable! Agree with you in terms of making it a bit softer though, thanks for the feedback!

Thank you for the kind words! Yeah I've been really focusing on that since it's just so satisfying to get it right!

Gameplay wise it's not too related to the theme, but I find this absolutely hilarious!

The level design is so genius, I love it!

Looks like everyone's self promotion, so better do the same! You can find it here: https://conradicals-games.itch.io/martes

It's about using your only unit of energy to discharge it into enemies, and then get it back so that you can re-use it to destroy other enemies! 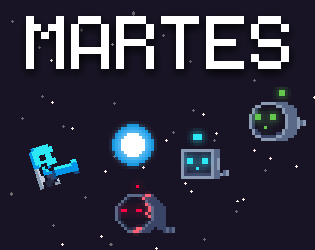 Another good one is this one: https://harrk.itch.io/1pco-op

You play a 2 player game, but with only 1 character. Really original if you ask me!

Thank you so much! Yeah I agree, would have made it better but oh well, there's always next time!

4 blocks club ;) Interesting idea! I like how the theme applies to multiple parts of the game!

Camera is a bit wonky (maybe a larger field of view), but the idea is so great! Really love how you can have multiple clones!

Haven't tried it yet, but sounds like a genius idea! Can't wait to try it out :)

Thanks! Glad you enjoyed it :)

I had this problem too, and it was because it had somehow already submitted it for me. Try looking for it in the submissions page.

EDIT: Checked your page and it looks like it's submitted :)

As the other comments have said, the core idea is super interesting, but wish it was longer. Well done!

That was the intention ;)

Thanks, so glad you found it useful!

Thank you so much, glad you're enjoying it!

Yeah I agree with that, but also think it looks quite nice. I'm trying to find a compromise between those, so I might just have a similar color thats just a bit darker. Great suggestion!

Yeah that's also something else that I wanted to implement, but have been having trouble with coming up with an elegant solution that doesn't deter too much from the simplistic UI design.

Thank you so much for your nice comments and feedback!

Thank you! Glad you're enjoying the polish I put into Slamslide :)