Aeroblaster is written using some features unique to Pygame 2.

Either you somehow downloaded the wrong thing or your antivirus is wrong. If you're concerned about viruses, just use the source. You can read every bit of code and there's not that much.

Try launching from the command line so that you can see the error. Usually the errors people run into are either permission errors because the script doesn't have perms to access the BS folder (usually because it's a different drive) or file not found errors because the path to people's BS directories is wrong. It works fine for me and many others atm.

Thanks for these suggestions. They're very good and I'd be likely to implement them in an update. :D

As for whether or not it's infinite, it's not. There's a bar on the left of the UI that shows you how far down you are and how close you are to the end. After you've beaten the game, there's an option to play to infinite depths. The end is at 3000m. (It gets pretty crazy in the 2000s.)

I was planning on updating the game if people liked it. I'd also like to add Steam achievements some time in the future. I think the main issue is that the rate at which new cards appear is a bit low. Once you get to the later levels (around 2,000m+), the gameplay itself becomes rather different because of all the chaos. The gameplay was mostly meant to change through the use of different decks though. I've also considered adding boss fights (and other special events) on top of adding more things to do within the levels. So far, the core mechanics have been received pretty well, so I'll probably make some updates if things continue to go well. ^-^

Drawn Down Abyss is a roguelite platformer card game with a focus on action. You travel down The Abyss while using your custom built deck to defend yourself from the local wildlife.

Please leave any suggestions or questions you may have here.

The update should actually be out right now.

Just delete the save_dir file and run the tool again. It'll ask you to specify the Beat Saber directory again.

Spellcaster's Forest is a weird mashup between bullet hells and games with magic based combat. The GIFs and images explain it best.

I made it for the 5th Alakajam with the theme "Spellcasting." I somehow managed to squeeze in 2 boss fights on top of the normal levels within the 48 hours given. 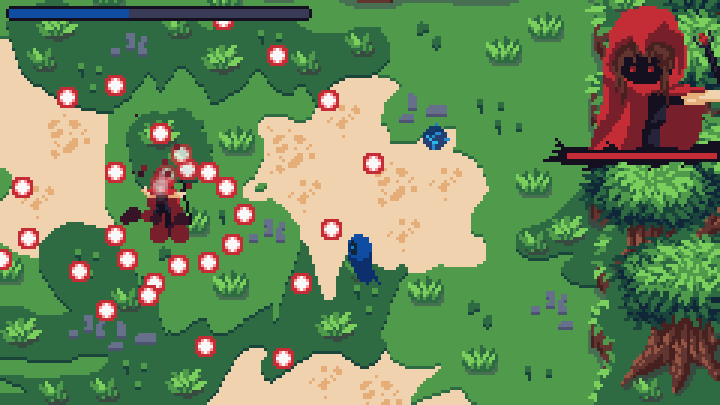 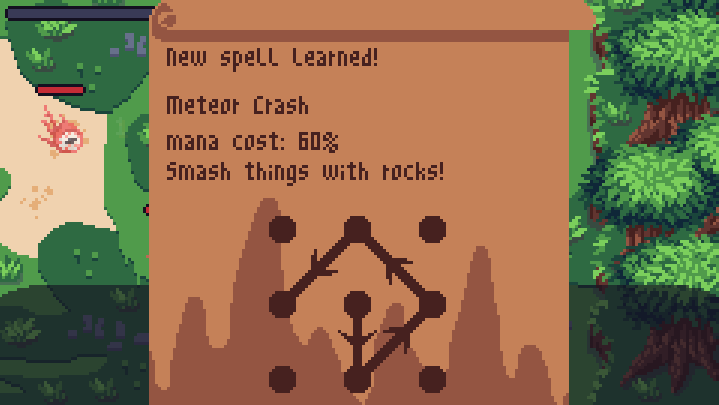 I don't think the ScoreSaber API (the interface with ScoreSaber itself) allows for those types of requests. All of the sorting options in the tool are what the ScoreSaber API allows me to do. You could download every ranked song by getting the total and entering that. The ScoreSaber API is missing documentation (or I can't find it) and I don't have a good way to find the total number of ranked songs using scripts. If I could, I could just make it work backwards from there.

Super Potato Bruh runs entirely on the CPU in a lot of cases. Although I’m a bit surprised that it couldn’t use your GTX 770. It’s able to make use of my GTX 1060.

There is. It’s in the options.

I want to see itch.io grow and I've been selling my games to a decent amount of people who have never used the platform before. I would love to see a statistic that showed what percentage of users who bought (or downloaded) a game were first timers. :D

I wanted to make an Aseprite alternative that works more efficiently with my workflow. Px Editor is the result. :D

It includes things like animation, layers, and selection tools.

Check it out here: https://cmlsc.itch.io/px-editor

That depends on other factors (like the source of your traffic).

The game jam’s theme was “Falling”, so it was meant to be the core of the game. A jam is where you make a game in a short amount of time and the tournament is where people compete for high scores in game jam games.

I use Pyinstaller for Linux, but I use cx_freeze for Windows. I’ve tried Pyinstaller on Mac, but it doesn’t work.

Spike Dungeon is a roguelite game in which you try to get as far down as you can. The dungeon is full of spikes, spiky enemies, and of course, you -- the spiky tortoise thing. Collect gold and buy items to help you get further down!

The game was actually inspired by a bunch of random games. Then I noticed that it was basically Downwell. xD

It should work on Linux with Python 3 and Pygame. (Python 3 should come with Linux.)

Also, there should be a Linux version of the game if it is part of the next AKJ Tournament. (I think it’s December)

I was planning on a Mac version, but either the packaging tool or the OS is making it impossible. :(

That’s what this feedback thread is for. :P

There should be a screen = pygame.display.set_mode(blahblahblah,0, 32) early in the source code for Super Potato Bruh.py. If you change the 0, 32 to pygame.FULLSCREEN, the game will run in fullscreen. I’ve already finished the update. I just haven’t released it yet.

I think itch.io can handle updates without messing up the save file. If you don’t have it installed on the client, you’ll have to download a fresh copy when it updates. It’s not hard to copy the save file over though.

The controls are going to be slightly updated in the next update. You can map up and jump separately. Also, for some reason, Pygame changes the mapping every few times for the same controller, so I can’t save mappings for it (or make defaults).

Yes, I’m just waiting on them to approve my paperwork right now. People who buy it here will also get a free Steam key when it comes out.

Not yet. I’m planning on it though.

I actually used to have jump on Z or X on my old games. I don’t know how I managed to not think about that issue.

There is no MacOS version. I’m assuming you’re using Wine or something. I actually had forgotten to add a note in game about this, but the “select key” is X. It also says so on the game’s page.

Yeah, I don't have a demo at the moment.

Anyone who likes difficult platformers may be interested in Super Potato Bruh. There are a total of 5 worlds to play through at the moment and I could easily add more if people enjoy the game.

I'll help deal with any issues that may occur. Just post them here.

Please let me know what you think about Super Potato Bruh. I'm interested in any suggestions you may have! ^-^

Super Potato Bruh has officially been announced and I'm aiming to release on September 19th!

Super Potato Bruh is a bullet hell platformer. It's heavily influenced by Super Mario Bros, Super Meat Boy, and Geometry Dash (due to the way levels are learned), although it's not influenced by a particular bullet hell. I'm hoping for a release next week and an announcement trailer on Saturday, but I'm a little bit behind on some stuff.

I've been getting some mixed opinions on the difficulty of the game.

Does this look fine or should I tone back the difficulty? (This is from the final level of World 3 out of 5)

For reference, here's the final level of World 2:

This game falls into a weird niche. The closest thing I can think of to a game in the niche would be I Wanna Be The Guy, but games are still drastically different.

I've still got a lot of work to do if I want to release next week. I haven't even started the SFX yet and I'm only 60% done with the level creation.