Hey, I'm Citybuilder! So, the last time I entered a game jam was all the way back in 2019, so I was super excited when I saw that Noa was going to be hosting the 3rd  Blackthornprod  Game Jam.

Since the last time I joined a game jam, I feel like I’ve improved quite a lot as a game dev: launching my first game on steam itch and learning much more about game design, coding, and art. 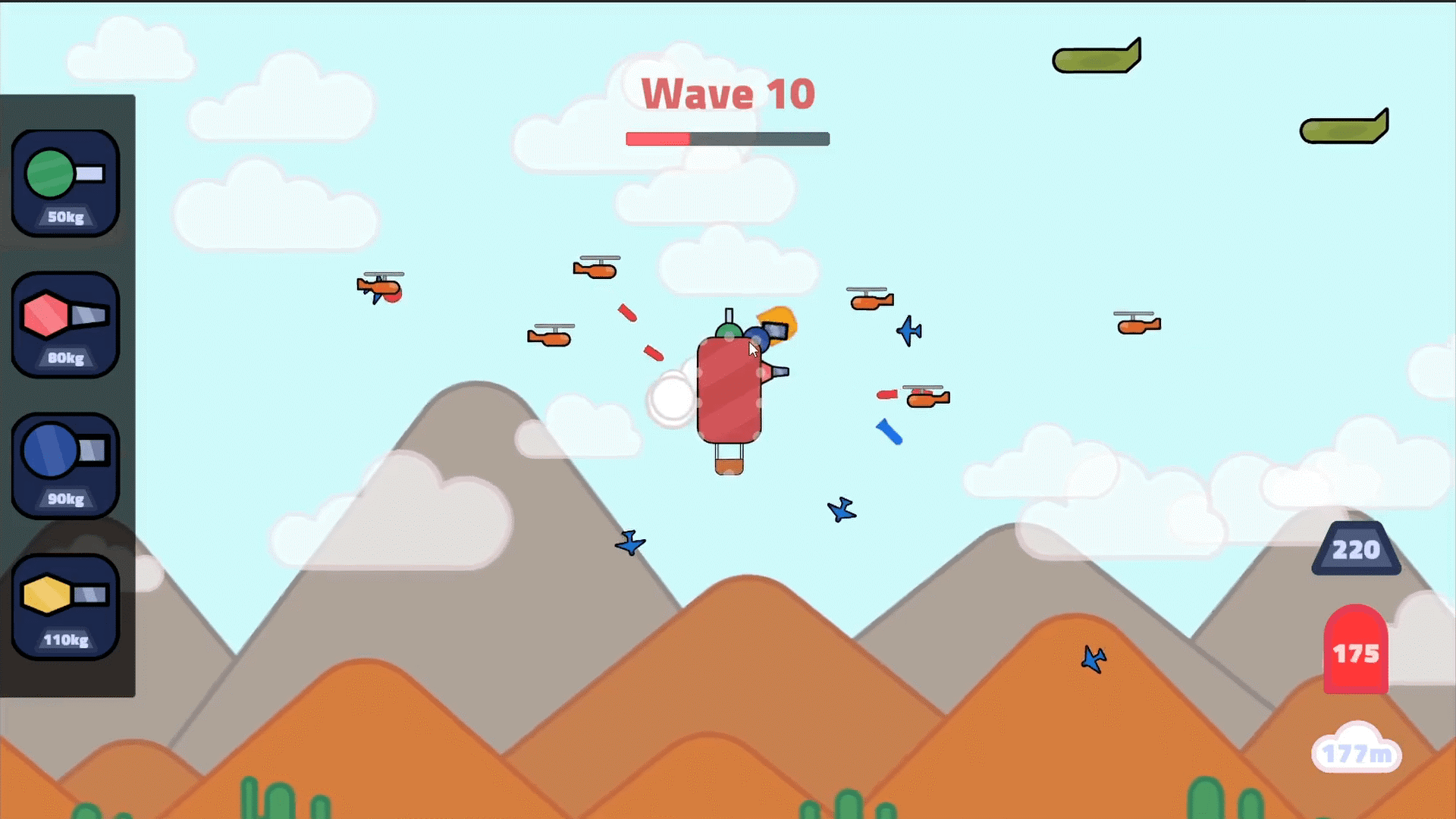 I really struggled coming up with a game idea. But eventually, I had the idea of a game where you defend a hot-air balloon using an array of turrets but the more weapons you have the heavier your balloon becomes.

The more weapons you have, the less lift you gain.

The first aspect I implemented was the Balloon physics. I used the buoyancy effector in Unity to make the balloon rise and fall based on its mass and wrote a script to change its weight.

I then began trying to come up with an art style. I was inspired by Alto's Adventure and tried to replicate its clean, geometric aesthetic. But I couldn’t make anything I was that proud of and so ended up forcing myself to try something new since I had already wasted most of Day 1. 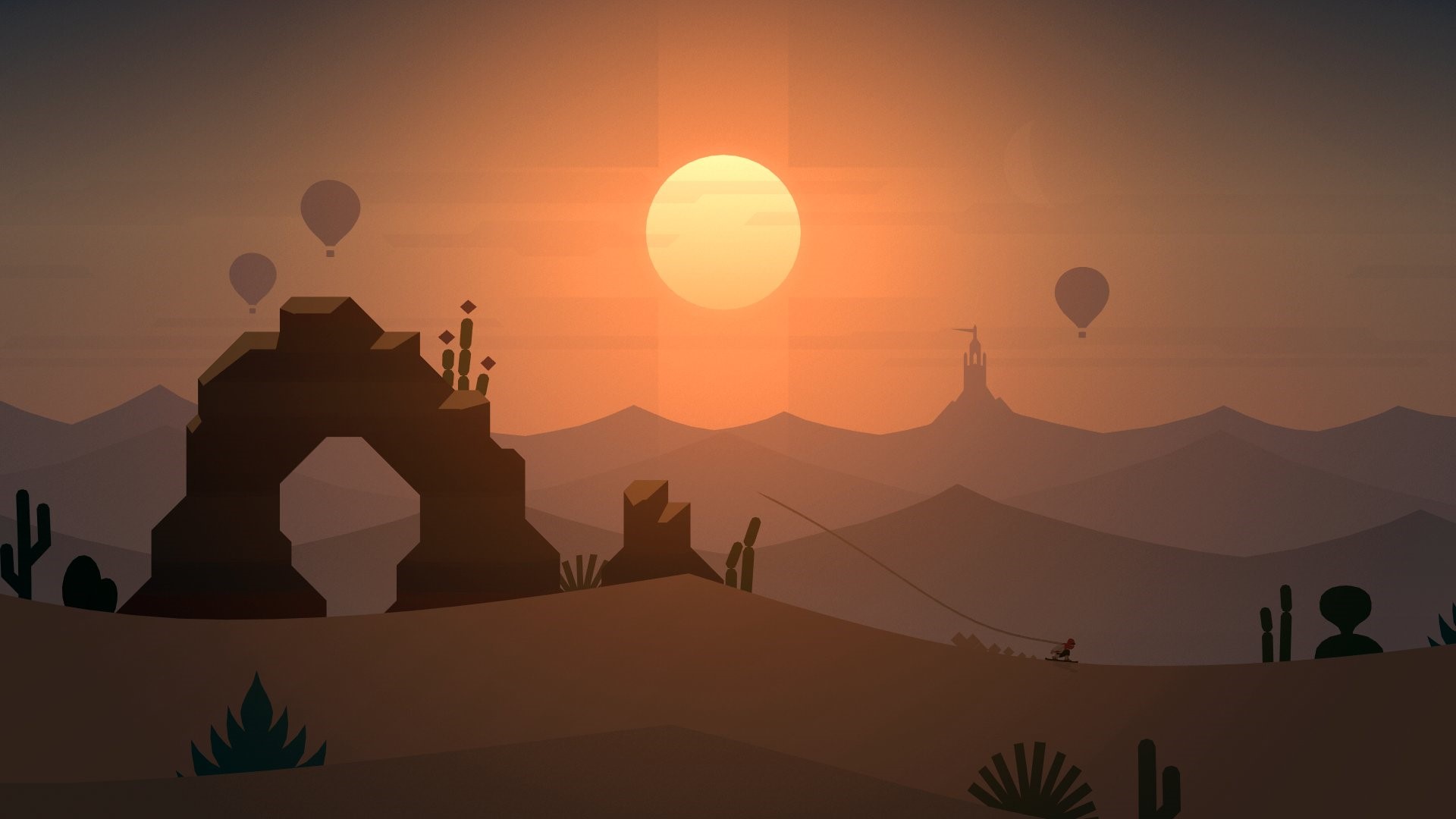 Day 2 was much more productive since I ended up getting most of the core gameplay in place. I got some airplane enemies working, which turned out looking pretty cool before making a turret which could aim and shoot them.

Day 4 was all about Enemy Design. I created a Helicopter that shot missiles, a much faster (Stealth style) aircraft, and a Bomber who’s slow but can deal a ton of damage. I wanted the enemies to complement the turret design well having each have its own strengths and weaknesses against one another, which hopefully would help make the game more strategic.

I also made a hot air balloon game! The narration was super cool. Great job, hope you enjoyed your first jam!

Thanks, yeah some thought of way to move horizontally would be really (thrusters of some though maybe?)

Thanks so much, happy you liked it!

Love the art and music! I assume the link to the theme was though the more kills = more enemies though I wasn't entirely sure. One small tweak would be to make the time after you die much much shorter maybe get rid of the countdown entirely as it can get frustrating as well as the usual polish screenshake, particles, etc would be nice additions. The key collecting was quite nice also. Great Job!

This is incredible! I've seen a lot of other games try the "Less health more damage" idea but this is by far the best I've played. I love the way you tie health, damage, and ammo together. Maybe a dash and faster pace gameplay could make it more fun. This visuals are also simple and stylized. Great Job!

The visuals are awesome, and the boss attacks are very well made. I felt that the shield wasn't very helpful as it made you overheat very quickly. If you added some Screenshake, more feedback, more particles and SFX this could make a neat game. Great job!

I love the artwork and relaxing sfx! They could work really well in some thought of RPG or platformer. Some more feedback when you died could help. Great Job!

Cool concept! It might have been more fun if you fully embraced being a vacuum cleaner and made that the main mechanic rather than shooting. Great job!

Beautiful and funny. I wasn't expecting to learn the history of golf this week. Great Job!

Super cool concept, this could make a great full game! The design was really innovative and engaging. Great Job! One of my favourites so far

Thanks! Glad you liked it, yeah I would of liked to have had more time to balance the weight system

B-but it has Screenshake? :(

Thanks, though for the feedback! I wish I had time to add a few more particles, glad you enjoyed it. Maybe I should have increased the screen shake a bit more. Thanks for playing!

Nice platformer! Small improvements to the movement could be nice such as sticking to walls or maybe an increasing jump height the longer you press. I loved the rotating platforms. Great Job!

This is a really neat puzzle game. Its simple and deep. I feel like with maybe a level system or some thought of progression system it would be very engaging. As well as SFX, overall polish (even more types of pieces?) it could become a super fun commercial game. Great Job!

This is a cool twist on Enter the Gungeon. I think some polish eg: Screenshake, Particles,  Bigger Bullets, and SFX would really make the game pop and be much more fun to play (look into Game Feel/Juice). Like what other people are saying the enemies felt a bit spongy. Great job!

The pencil mechanic was really cool and unique, I would love to see a game solely based around the pencil since it felt like the shooting and blocking added unnecessary complexity. I found the UI a bit confusing as well so a better tutorial or linking between the mechanics and UI would really help. It didn't really fit the theme (though maybe I was missing something), Great job for your first Game Jam!

The finding box mechanic was really cool and unique, especially the metal detector style beeping as you get closer. I never really understood the points system or how to win other than getting the diamond though. Maybe some clearer UI or story could tie it into the theme more? Great Job, loved the colour scheme!

Cool Game! Its an interesting take on the endless runner genre. It would be even more entertaining if you added more polish like screen shake and particles.

Great prototype hope you keep working on it! :)

Prepare to cry inside when you reach level 17 (The Final). It is somehow more brutal than the actual game. Just about managed to do this by exploiting the pause button.

As always great game! It would be fantastic on mobile and I really think you should pursue it just please lower the difficulty I've nearly spent an hour on this brutal game...

Thanks and by the way there is screenshake in the game

And by the way you can skip dialogue by pressing A

Thanks for the feedback, totally agree with what you've said the story which is the main link to the theme needs to be polished and fleshed out.

Its my first game with a proper story so its not that great or polished and is definetly something I need to improve on. Thanks for the feedback its greatly appreciated

Reply
Save the Environment Game Jam 2018-2019! community · Replied to TommyAck102 in I couldn't submit my game prototype because itch.io says no apparently.
Citybuilder Studios2 years ago

Hope it all goes well :)

Really interesting game it could be expanded to create something truly unique!

Thanks, I hope to continue the game in the future!

Thanks for the Feedback Jonas, the font was one of those last hour things you completely forget about already changed it in my project