Sick.  I played this game solo today more time than I care to admit.  Nice work.  Also, unrelated to this, I built a one shot adventure for Mausritter and I just got done running it for Virtual Kobold Con and the players all really liked it.  I would love to put some finishing touches on it and provide it to you to use as an intro adventure.

Dude, thanks for swiftly answering all of my questions and for making this and Mausritter.  Keep up the solid work.  Just one more quick question.  If you take the optional rule to spend food to push further down the adventure track, can you do that multiple times or just once?  Also, if I'm understanding your clarification on the borders then there's no reason to build more than three defenses in a given border because there are only 5 daggers and so if you build 3 defenses then that border is now safe.

I'm a bit confused about how Border Tracks work. The rules use the term "A Single Border Track" and "The Border Track" in a few places so I'm not sure what counts.  For example, it says that the game ends when all the attacks fill up on "A Single Border Track".  Does that mean when there have been five attacks in the "North" or when there have been 20 attacks? Or there's the rule about losing a die if there are three undefended attacks.  Does that mean three daggers marked anywhere on your sheet?  Or three in the same segment (i.e. three in the North).  Also, does it mean that there was no defense when the attack initially happened or does it mean if you end up piling up 3 with empty defenses (in other words.  Can you build borders under filled in daggers to "cancel" them and you just have to try not to let 3 build up?)  I also have a question about how Adventurers work.  Do you have to write a number before you can do the optional uses?  In other words, if I have an adventurer on a track and I've done 5,6,7,8 and then I roll a total of 4, could I use the adventurer action to call that guy home, or can I only do that if I roll a 9 because I have to write in the number and then do the optional bit?  Also, it seems like once you lose a die you no longer have a reason to bother building that mine, so it seems unlikely that the mine building game end would trigger unless someone was just really good at building walls.  Another question, are you allowed to have more than one adventurer out at a time?  Lastly, I see that there is a tech points tracker thing.  Is that just a tracker of how many techs you've built such that you mark it every time you do a tech in order to keep track of points?  Or is it like a separate group of techs that is just for farming points? 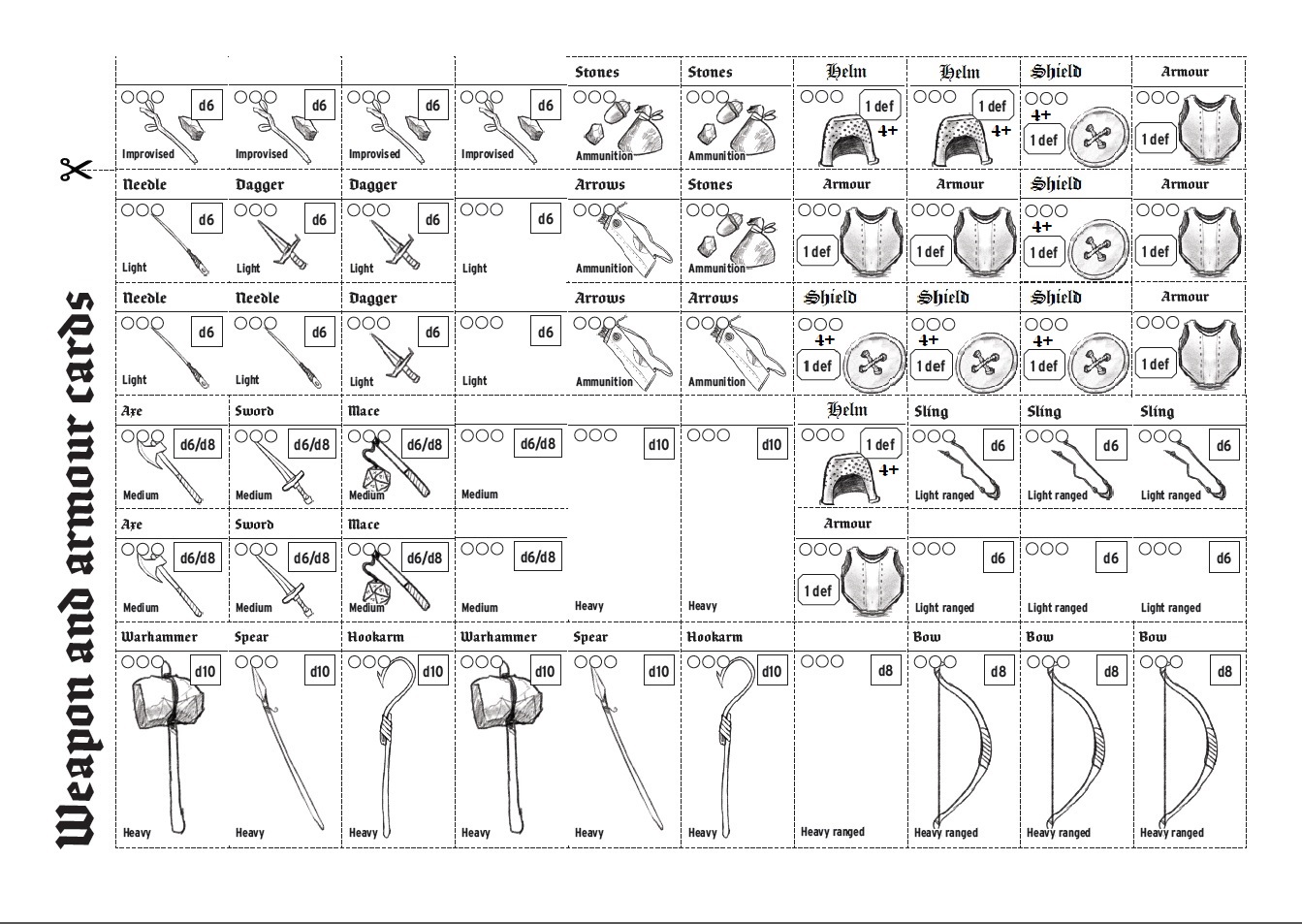 So what I've decided is that the shield and Helm roll their usage die immediately and prevent damage and take a usage only on a 4+.  So if you are wearing all three and you take 5 points of damage you roll a die for your shield and a die for your helm.  Lets say you get a 5 for the shield and a 2 for the helm.  Your shield takes one point of usage and you take 3 damaged (5 - 1 armour - 1 shield).  The armor only takes usage damage at the end of combat, and as before you can sacrifice your shield at any time after finding out the result of an attack to cancel it entirely.

Ok, so I just tested my alternate armor with some practice rolls and I think I get why the armor value of 1 was chosen.  Even two points of armor drastically reduces the amount of damage a character takes because of how small all the numbers are.  If a mouse can equip three pieces of armor and gain 3 def it makes a huge difference.  They start being able to shrug off attack after attack without taking any damage at all.  I might play around with it a bit more to see if I can settle on something that allows for shields to be a separate item without breaking the game, but I don't think I'm going to have them grant a point of defense or be able to negate three attacks.  But at the same time, I don't want the player to not have something they have to give up when using the shields shall be splintered rule either.  It should cost something to sacrifice your shield.  So basically I'm not really happy with either solution at this point. 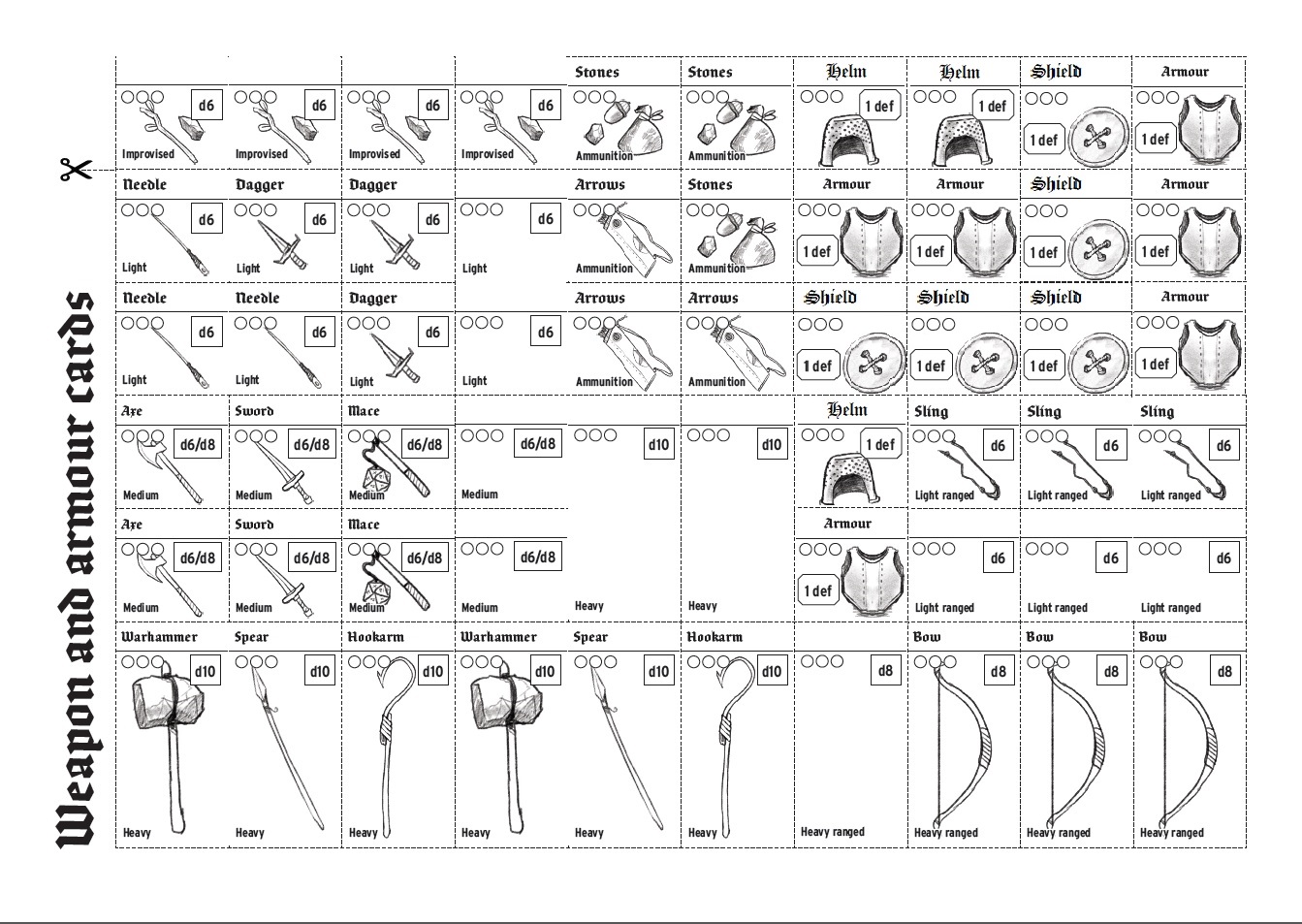 It's actually not my own rule.  In the OSR community it's known as "Shields shall be splintered" and it's a common house rule to make shields a one shot negation of an attack.  Then again, the shield also usually offers a passive bonus as well but I didn't want to ramp up the armor too much.  I might give it 1 def and 3 uses but with the option to shatter to completely negate an attack.

I'm about to run Mausritter for a virtual con in two weeks (Kobold Con) and I am working on an adventure for that.  I'll happily share it with you when it's finished.  It's going to be a one shot dungeon crawl but in the roots of an old tree and it will feature elements that play into the fact that these are mice (Like human made objects or things to show that the characters are little.  I gave the players the link to this site so I don't want to say too much yet).

I just got done making an alternate weapon and armor sheet that can be printed out in which I did away with the light/heavy distinction entirely.  The way I have it there are three "armour" items.  I have "helm" which uses the thimble image from the heavy armor and offers 1def and has three usage.  I have "armour" which is the light armor image minus the shield (I copied and flipped the exposed part to make a symmetrical armour image that I liked).  It also has 3 uses and offers 1 def.  Then I have a "shield" which is just the button from the light armor image.  It has no usage and gives no def but works differently.  Basically, if you have a shield equipped you can declare that you are sacrificing your shield to negate one enemy attack and then it shatters.  Each of these items takes up one equipment slot.  Occupations that start with light armor get the armor and shield.  Occupations that start with heavy armor get all three.  I have attached a jpeg of the alternate sheet. 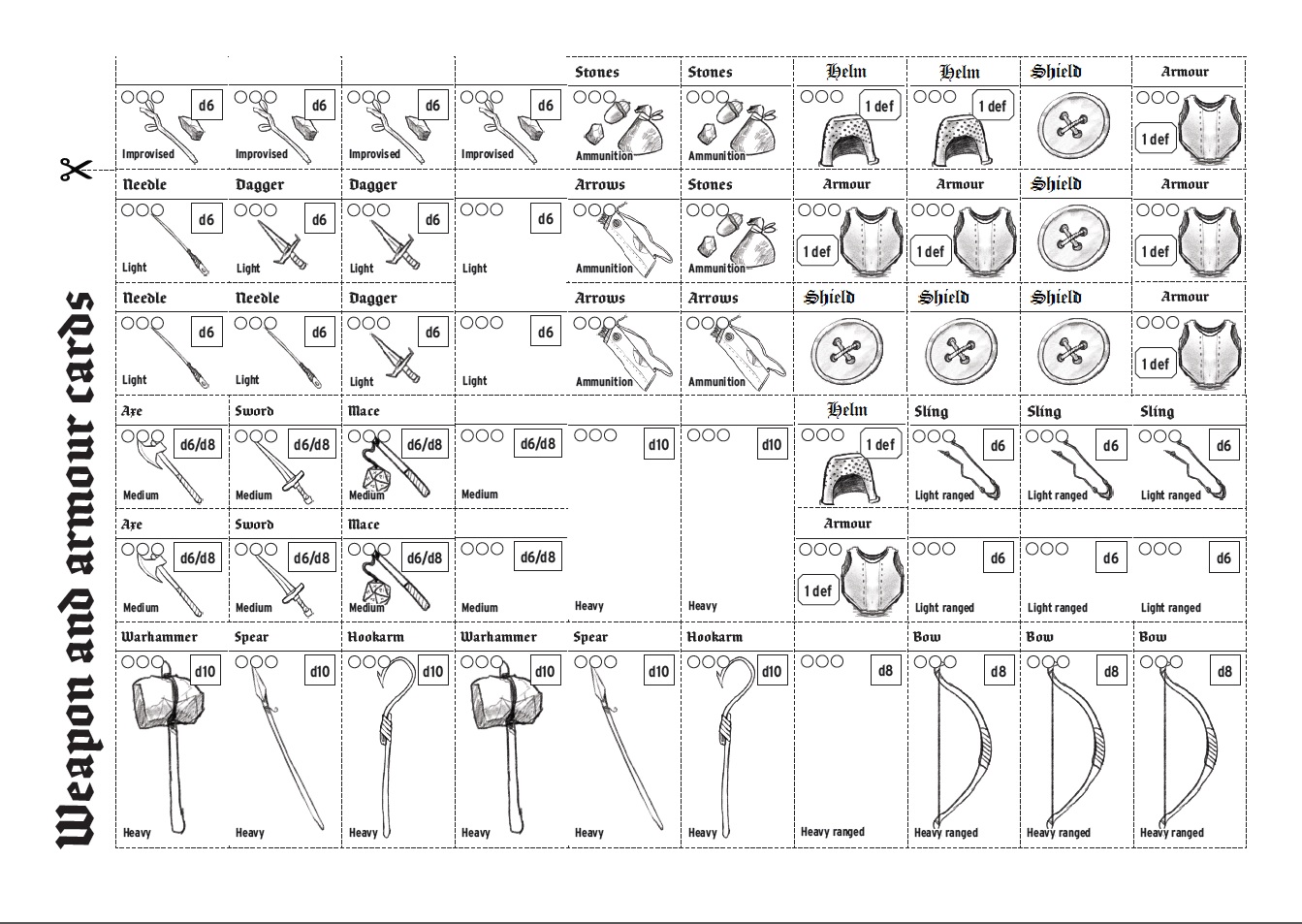