Pata Tracker community · Replied to Cedric Stoquer in Why do you want to be paid in yen?
CelineRobin9 days ago

Exactly! Thank you for answering my question.  Even if it did mean I got insulted a bunch of times, its still nice to get to know other people. I'd say the bad sides get a little bit more to me, being (or atleast being called) a teetotaler, and I got sick of the TV mimicking a long time ago. I might have over stated those things, but my points still stand.

Reply
Pata Tracker community · Posted in Why do you want to be paid in yen?
CelineRobin9 days ago

Wow guys, I just looked over the comments and I have to say, I've been absolutely schooled. I don't know about you, but seeing the exact comment  nine times i a row really destroyed my sense of self worth. You people really have convinced me to never speak again except when eating or having a heart attack.

I'm still trying to understand why I got so much hate for asking a question. The man's name isn't in japanesse (which I speak, by the way) so naturally I'd want to know why they're there. "I'm located in japan" dose'nt mean you live in japan, it means your *in* japan. I've seen games where yen is the main currency even though they're produced elsewhere, and as a person who's taken the time to understand the country and language, it's out of place. It's clear all they know of japan is anime and minor tourisim. If you knew what an oppressive, alcohol driven society they have, you'd distance yourself from it. And on that note, are you all just a gang of weebs and their one, self attested 4 hour old sockpuppet? Or is this people from another comment I made where forgetting one word got me dislike bombed? Rightfully so,  but if your here from there, would you care to look in the comments? There's already my apology direct to the creator there.

This game looks polished out of the box and has great mechanics. I would love to see more of this!

The game has a map in it's top right corner. In the top right corner of the map itself is a little 9 tile compass.  When the waypoints say "somewhere around here", it means you're either very close or on top of the tile your supposed to be on, and you can use the compass to tell. Unfortunately, the compass is visual and cant be read outloud. Modifications have to be made to the game for you to be able to track waypoints less than a couple world map tiles away.  Maybe you could ask Brian for waypoints to be precision tracked all the way to their destination, or a way to check the compass textually for blind people.

Yeah, I'm sorry about being judgey. I merely thought it was out of place in an anti police bundle since perceived crime and later escalation is what got george floyd killed. I made my observation without being clear and I deserve to be downvoted for it. Even if your game's free including it means the bundle as a whole appeals to a wider audience. I guess I shouldn't judge a book by it's cover (literally-ish.).

The people who say they bought the bundle because of it, I don't know how to tell you this, but... the game's free.

yeah I'm sure that the game with the thumbnail BE GAY, DO CRIMES is helping this anti-police brutality bundle sell.

Reply
Pata Tracker community · Posted in Why do you want to be paid in yen?
CelineRobin27 days ago

Oh, okay. Would you mind telling me why you're there?

Reply
Pata Tracker community · Created a new topic Why do you want to be paid in yen?
CelineRobin27 days ago (1 edit)

I've checked and my system locale isn't japanese. If it's not your language, then it's harder to price your product. Infact, 200 yen (what I saw as the suggested donation) is actually just under two dollars. the real price you should suggest for if you don't want to be flooded with change is 219.38 yen.  please tell me your not a weeb.

A game should be entertaining, not addictive.

I can't really offer you much advice other than replay it until  you get it right, and be weary of the spiders sensing range,  which is around 3-4 tiles,  make sure to get noticed from a spot that takes a couple turns to get to.

The game seems nice, but is EXTREMELY stringent about how you should progress through a level in the early part of the game when you have little health, I had to restart the room after the spiders over and over because I'd misstep once, and I'd end up with a spider right next to me, where freezing would do nothing. It blocks one point of damage from that position, but with 6 health the effect stacks up over time fast.

I don't mean to be mean, I think the music and art is great,  the game is fun to play even if it's annoying to misstep once and have to restart the level. If the art is part of a tileset, I'd like to know where it's from.

But playing the game is tedious and borders on being unfun due to how specific the way to  complete each level is. I blame this mostly on being given such weak spells that have to be used perfectly, or else they don't do enough damage to an enemy to save yourself from dying.

My reasoning was centered around  Monika's ability to delete other characters.  If the deletion is instant, then Monika wins, but if  it takes enough time,  and if deletion has to be done all over again when interupted , then sonic could probably get in enough hits to win. This  might not be the physical power related answer you were looking for. But really, pitting  a  physically unenhanced teenager against a three foot tall super hedgehog that can go the speed of sound and faster seems unfair.

its getting more and more easy to  end up thinking about  random things  the longer we're cooped up inside.

I too have pondered this.

I love this game, its clear that love was put into every part of it, even if it was this short. I do wish I could atleast see the "five more seasons" the exec was talking about.

Reply
itch.io Community » itch.io » Questions & Support · Created a new topic How can I see my game history?
CelineRobin51 days ago

I wan't to find a game I played many  a while ago. I checked my unrated because I don't rate stuff, but it wasn't one of my first games played or a game I played recently so it didn't show up. For the visual novel, I thought it was called "dynalos" and was created for either NaNoWriMo or NaNoReMo. I think I just misspelled it, but learning how to see my game history would still be helpful .

that's not the downloaded version,  sorry. thats the web version. It could be not scaling correctly to my  monitors aspect ratio, which for the record, is a TV hooked up to a  pc. I don't think its very likely to be the reason why though.

I know it dosen't seem crucial, but it's something you'll really want to work on if you want your game to look presentable to everyone who wants to try it out. This is a simple jam game so its not that important, but it's something to keep in mind for the games your looking to be known by. 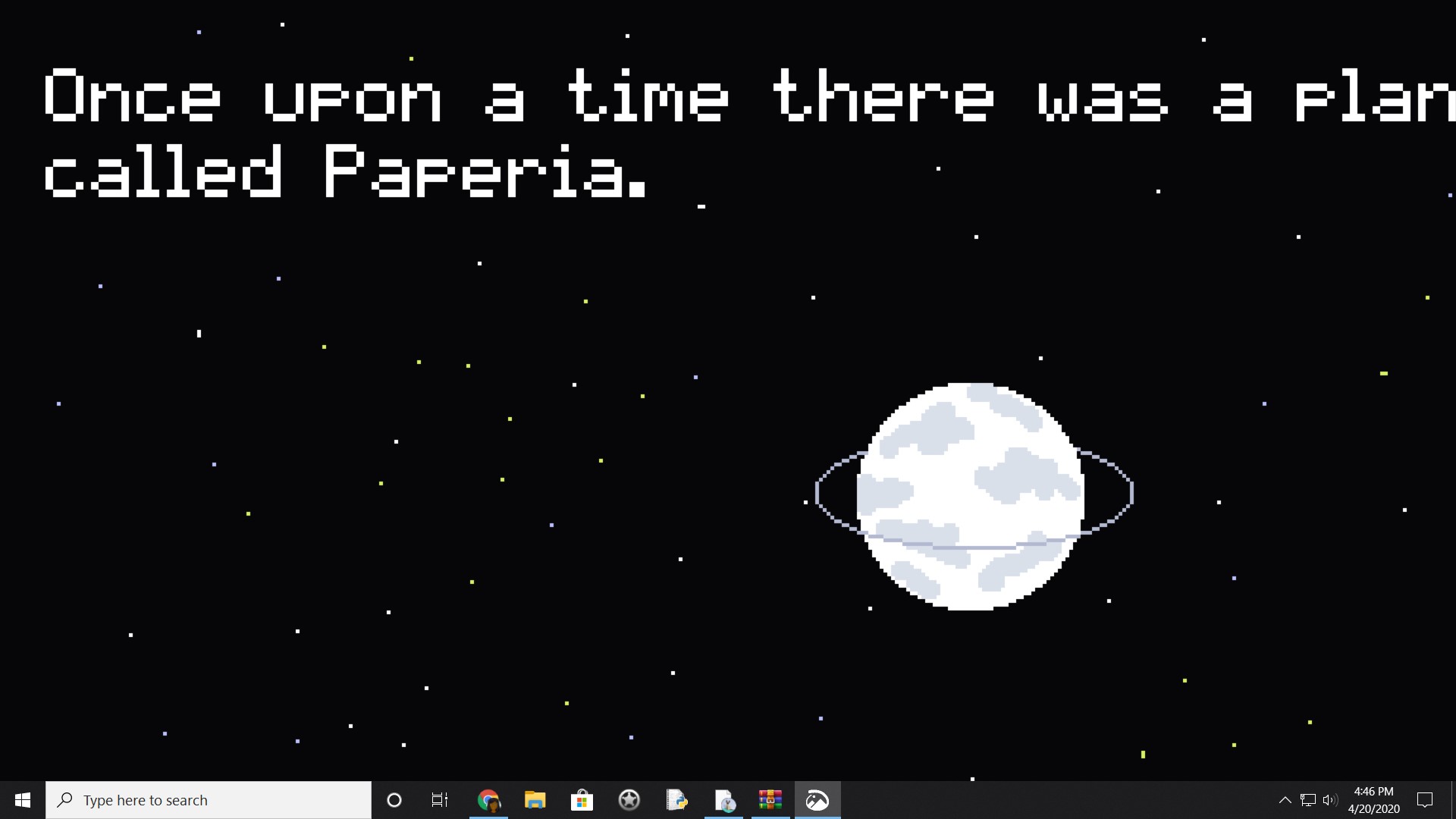 Here's both the story panel and game snapshots. You can just see the H and X of the health and experience bars. 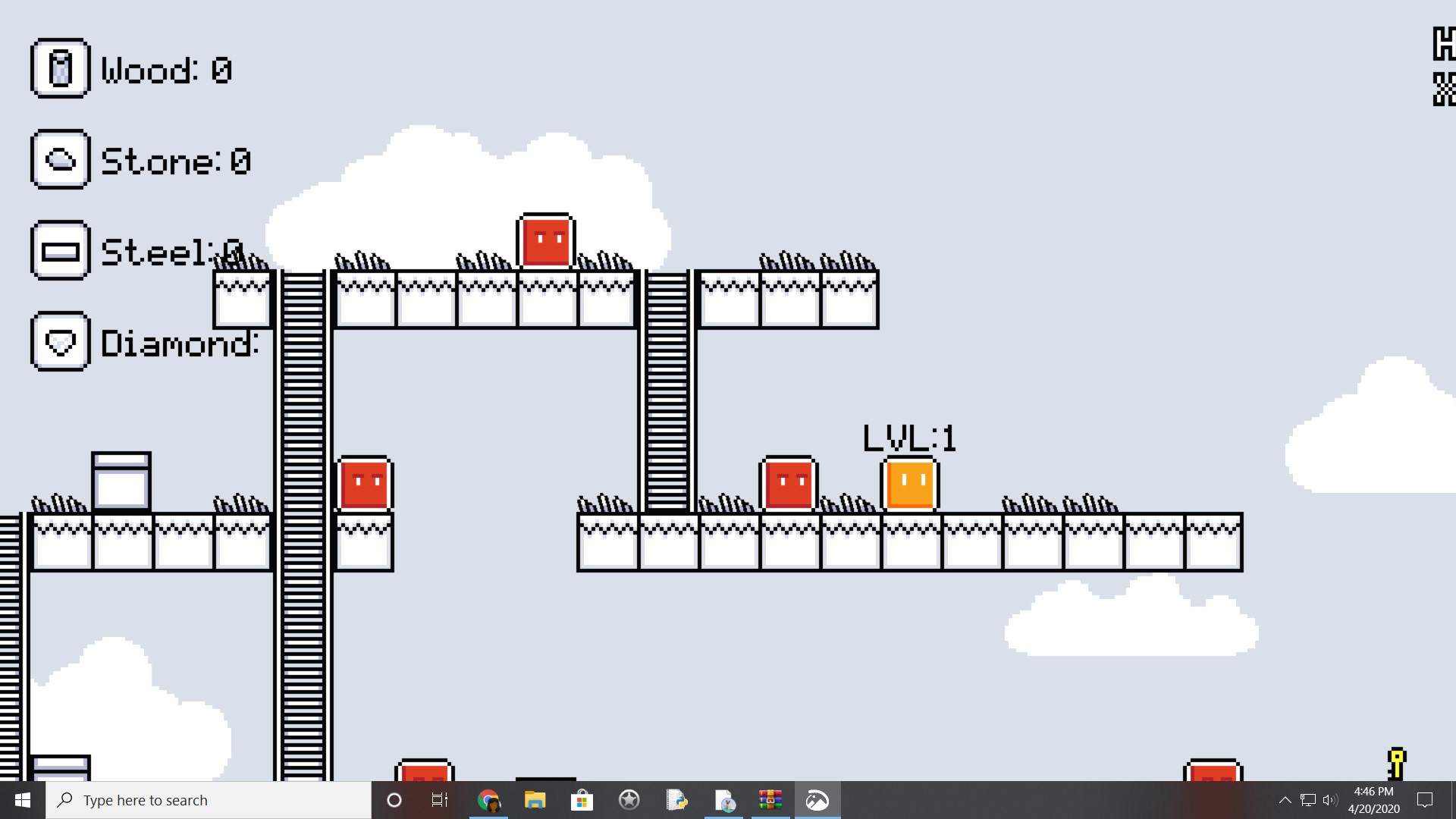 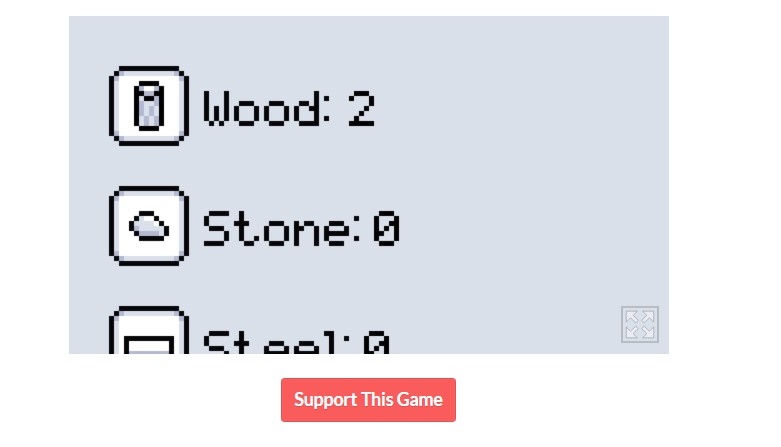 The overlain graphics are very off. When not fullscreen, I can see the listing for wood, stone and steel gets cut off at the bottom. When fullscreen, I can't see my health or xp. I'm on windows. help.

Everyone knows if your ancestors weren't bombed in Hiroshima, you don't get to use the yen.

Oh! so you mean like Zombie Society - Dead Detective by Lu Muja? I like the idea, but also in that game is proper evidence collection and brainstorming a conclusion. I was expecting that to be the kicker of your game, but I understand and see how multiple endings could be a part of a real mystery.

Can you conceptualize what you mean by real mystery? Do you mean that there is no set correct answer (ie randomization of suspects), or there is a need for real congnitive concideration in solving a crime? or some thing more esoteric?

I've decided to play through the whole game again and I got past the point. Did you set it up so that you have to talk to the cyan nose before you can leave the catacombs without getting robbed?  Because thats most likely why. This game is great either way :)

I couldn't get out of the catacombs so i closed and reopened the game, and my save was deleted. Not really sure if I should keep playing.

When I start  it, after the unity logo,  there's just black. My browser stops responding to me immediately, i cant scroll or do anything else.  You might have a loop that creates something on startup that never finishes. Usually it just generates lots of errors, and stops the unity player, but in this case it  might be something extremely computational that stops my browser.

I've only ever programmed games and game engines in javascript, so it might be something different for unity.

This game crashes my browser without fail every single time i try to run it. I'm on windows using chrome, please fix, this game looks fun.

So in this game you fall into a coma from sugar overdose after eating too many fruit gushers, correct?

why does everything on your page shake

I cant target towers. I right-clicked, left clicked, and yet i canot target it

I try left and right clicking, but neither swats the flies.

Games with trans people dont bother me, but when I see one with a conflict centered about being  trans, or a character being trans for no apparent reason, I can't help but feel like it's some way to pander for (most likely) tumblr traffic. I mostly try to keep distance from tumblr, so I'm not sure about these things, but it's such a niche and complicated thing, I don't understand how they get so popular. I'd like to hear your opinions.