CatStack is a 2D puzzle game which I'm doing as a solo gamedev project - it has match-3 mechanics but is controlled totally differently to most match-3s in that you control a stack (as in the data structure, or a stack of plates) with your colourful 'cats' in it, and use it to push them on and off the grid where the actual match-3iness happens. This is kind of cool though because it opens up some new gameplay possibilities that don't really exist in other puzzle games. There are currently three modes:

Time Attack: It's just you, the cats and the clock. You have to clear enough cats to meet the score requirement before the time ends.

Bomb Game: You have to try and clear enough cats to clear the timer without accidentally lining up three bombs - which is frustratingly easy to do because every time you push/pop something it moves the entire column. This is the most 'puzzle' of all the modes.

Survival mode: Sort of a tetris-y thing, almost - cats fall from the sky at an increasingly fast rate, you have to clear them before they reach the top of the screen. Actually pretty stressful even though I developed the thing.

I've also got some plans for some sub-modes for these game modes, but they're secret for now.

Graphically I've gone with Inkscape-drawn vector graphics then enhanced with GIMP. I'm on Ubuntu so I'm all about the very Free tools. I think this way of working is getting reasonably good results considering I'm not really an artist or designer and I don't normally have a huge amount of free time on my hands as I'm developing this around full time work. The game engine is the ever-excellent Godot, which does unreasonable amounts of the heavy lifting for me.

I've held off on doing a dev log until I actually had something worth showing off. I'm unreasonably bad for starting projects and not getting to a good point where anything works, but at the moment I feel like I could just upload something in the next few days and have it at least be something vaguely playable so now feels like a good time to start talking about it. It's not my first game project, exactly, but the game is definitely scoped with reasonableness given time constraints in mind.

Screenshots so far (some of it is a little WIP-y) 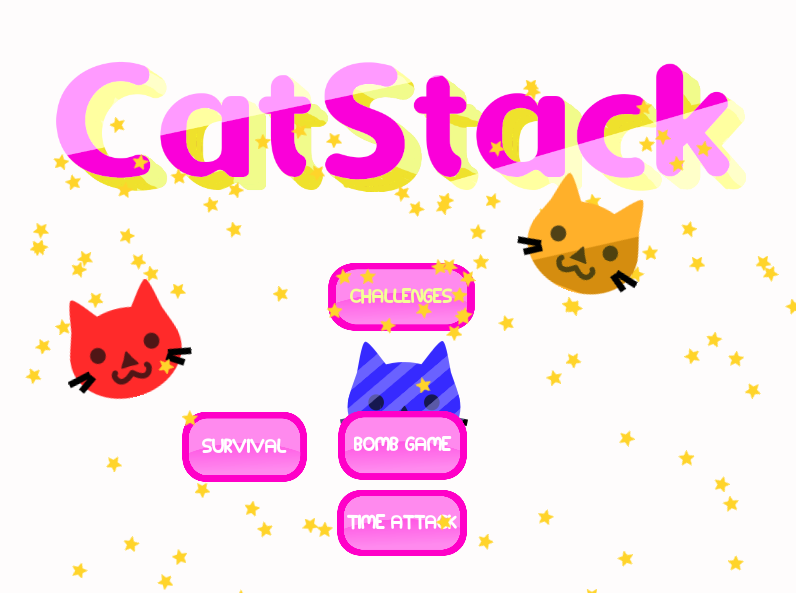 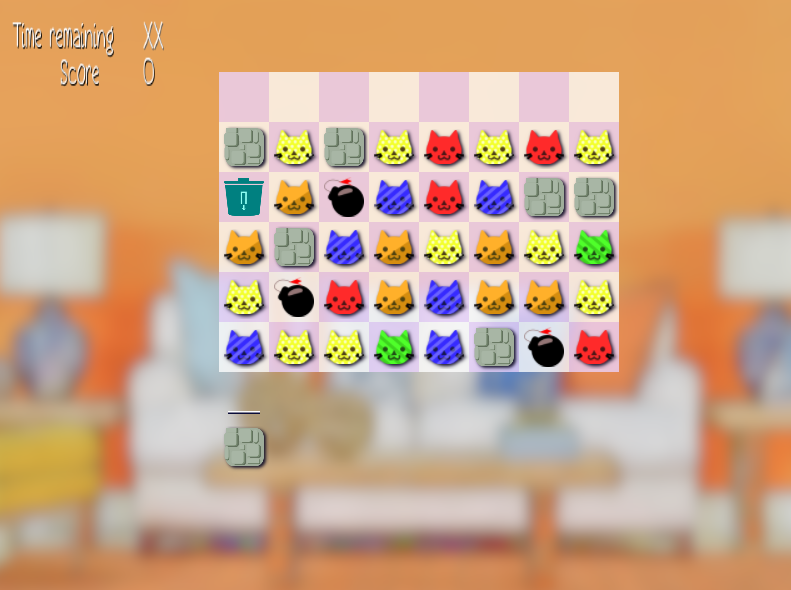 But there's more in the works.

Today I did a couple of major things:

Today I've added stone mechanics. This is part of the Bomb Game, but might also find a place in survival. Stones don't get removed when you match them, so they just kind of clog up the game screen - but there is an existing 'bin' mechanic which dumps the stack so maybe if you just...

The video gives a good (if slightly slow because I had to think about what I was actually going to do to get rid of the stones!) demonstration of how the game looks in motion.

Also the logo at the top is a new redesign today!

Let me know what you think. :) More to come! Also if anyone is interested in play testing this, please let me know, it'd be great to get some feedback.

Just did some work on this - I've now got a fairly sane development pipeline set up. Objects and jazz get loaded from Tiled maps and get loaded into the game in the right place and animate correctly and stuff so woo, progress!  Currently it looks like this:

The game is called 'Flow Control' now partly because there were lots of things called Cyber-something or described like that, partly because that sort of describes the main game mechanic but mostly because it's a terrible networking pun.

There's now an itch page for it that you can view as well!

The handling on there looks very well refined given how well you can take a corner at high speed. Looks cool!

Your systems are under attack, as the IT administrator it is your job to make sure that threats are shut down while documents are processed successfully.

Oh and one more thing, this attack is happening to parliament - the law makers of your land. So if you don't sort it out, there could be severe consequences!

There will be many challenges that come your way such as budget cuts and having to keep up with system updates to keep would-be attackers at bay.

And that's it as far as concept goes so far! I developed a little bit of a "taste for meat" when I developed https://forums.tigsource.com/i... Public Space Evaders- but for the sake of developing something approaching actual proficiency I thought I'd stick with the same toolset, i.e. LibGDX - which is super nice because I can target pretty much any platform I'm interested in targeting with it (I'm thinking web as the primary target, but I'm hoping to do a mobile distribution too). It'll be my first serious foray into an ECS based architecture.

This game is, like my previous one, inspired by current events: https://www.standard.co.uk/new...

Although I expect the scope to be a bit broader since I'm not trying to work to an incredibly short deadline (like, say, during a snap election) - hopefully the concept of information security won't be totally irrelevant by the time it's finished!

Okay it's pretty clever and fun but also makes me want to throw my laptop. I love it. And hate it. and ARGH.

Nice Jam! It'd be cool if it were developed further maybe with some obstacles. :)

I like your game! I made a terrible sleep deprived let's play of it. Enjoy! https://www.youtube.com/watch?v=O6G4mbHaRis