I didn't know I was missing it until I found it.  Awesome!

Adds accurately. Doubles as watch. Could be useful for setting coordinates on time machines. Would calc again.

This is your first career posting. You have been trained at Fleet Academy, but you lack much real world experience. Your job is vital to the survival of the crew and the completion of the mission…even if you do spend all your time below decks.  As you play, you will record your thoughts and weigh your decisions in your personal log. By the end, you will have written a journal that reflects growth, loss, challenge, resolution, and significance.

This game is hacked from the excellent Wretched and Alone SRD by Matt Sanders.

Any money realized from this game will be donated to the Children's Grief Center of New Mexico. 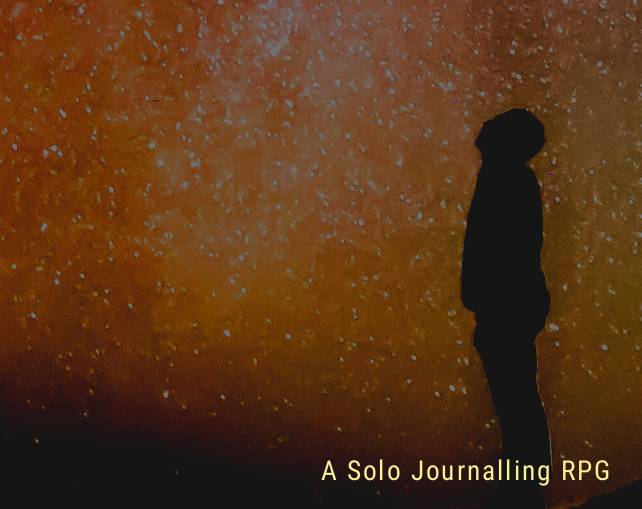 I love this kind of creative thinking.  It's a star map!  It's a linguistic analysis!  *It's both.*  Thanks for pointing this out.

Wow!  This looks so fun!  And horrible.  And ... oh my.  It makes me want to crawl under my desk just thinking about it.  Definitely good horror material.

Instabuy!  So relaxing and fun.  Just watching dogs swarm around and pose and have fun is a major perk.  Snapping a beauty shot makes my day.

Where on the hard drive do the photos get stored?  I want to browse them without having to launch Steam and navigate a bunch of menus.

HA HA loved it!  The hovering with fire mechanics are a bit weird but cool once I got the hang of it.  Wizards!  Argh!  KILL THEM ALL

Wonderful atmosphere!  I love the lightning effect.  The music pops and keeps it fun.  Great work!

Modulus is totally the secret sauce.  You just reduced my 2 hour struggle to figure that out into a handful of code.  Thanks!

Awesome!  What license do you release your source code under for the patreon?

Congrats on your game jam!  Can't wait to play it

Reply
My First Game Jam: Summer 2017 community · Posted in [IF in Texture] Carl and Neil Share a Dream
Groove, M.D.5 years ago

Things are supposed to go all 'splody in game development, right?

So I totally forgot my wife was having knee surgery this week.  Add a five-year old and a full time job to the mix, and....well.  I haven't worked on it for 3 days.  And the due date is...um...tomorrow?  Well then.

Fortunately, I kept the scope of my game really small.  So writing the text is the hardest part.  There are no big puzzles or complex inventories to keep track of in the game.  Texture can make its way through those systems with a lot of pushing, but the engine is really about letting the words flow.

My game is based on the early life of science popularizer Carl Sagan, without trying to be completely biographical.   I'm cribbing pretty heavily from Wikipedia to get inspiration.  Then I tweak the content to make it more approachable for a contemporary audience.  Dr. Sagan was four during the 1939 World's Fair, and I just don't have time to try to get that atmosphere right and tell the story I want to.  So I'm going with what I know, hand-waving the differences, and hopefully staying true enough to the realities.

The game's interactions are based around cognitive development in young children: how to learn about the world as you encounter it.   So the controls are based around different ways of thinking: there's wondering, reasoning, imagining, doubting, and so on.  As they player goes on, they pick up new action words that reflect more sophisticated ways of thinking.  That means the story's narrative language grows more complex as you play.

Reply
My First Game Jam: Summer 2017 community · Posted in [IF in Texture] Carl and Neil Share a Dream
Groove, M.D.5 years ago

Okay, so here are two screenshots.  The Texture game engine here is unique.  To understand how this works, basically:

SO here is BEFORE the player noodles around with the buttons...

Here, the player has is about to use the "Wonder about" button on the "stars up there in the sky" text (by dragging and dropping): 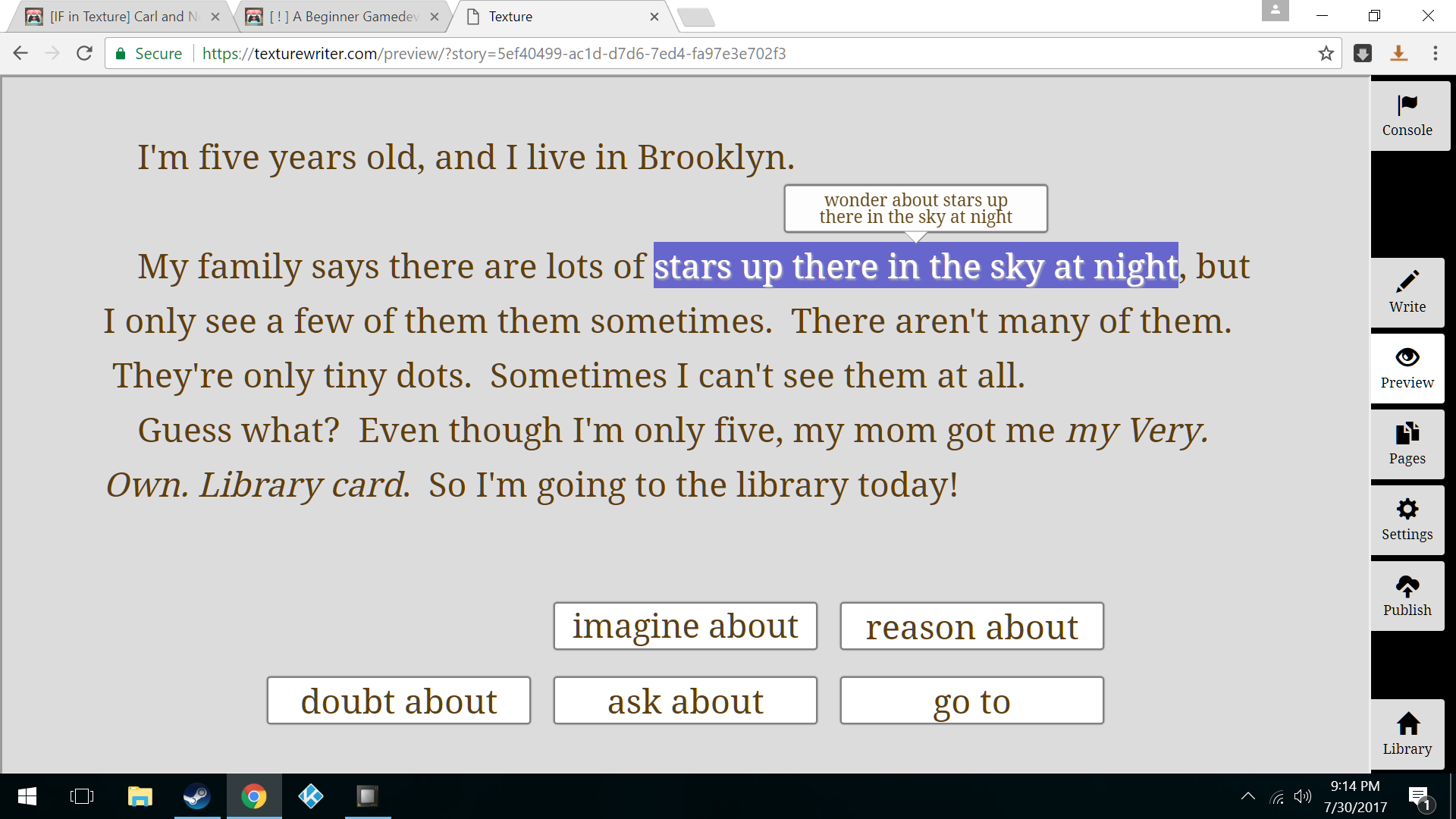 ...and some new text is revealed.  (All the questions in the middle.) 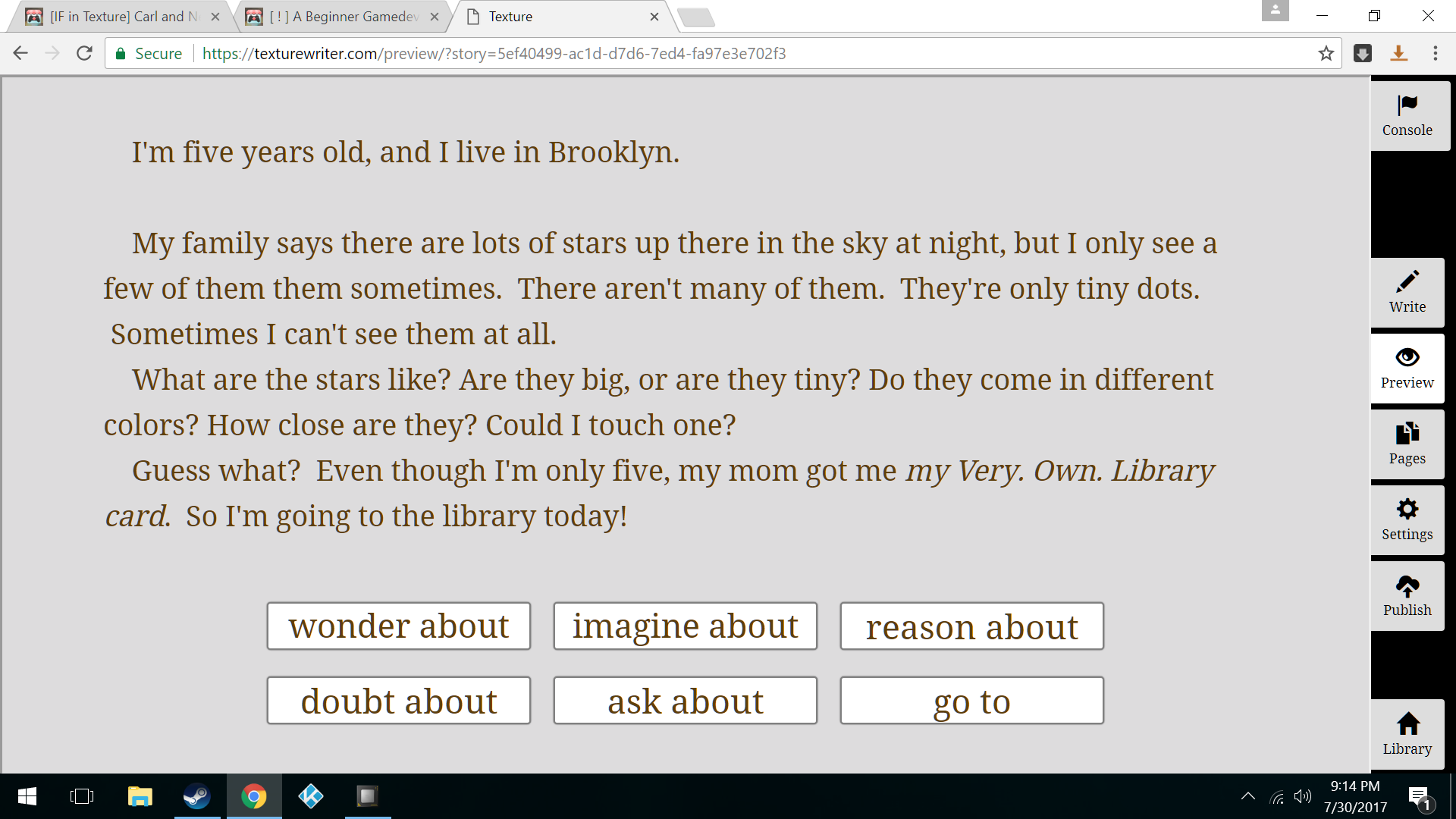 So basically, today was about writing introductory text, then expanding on it for the player to discover.

The new text arrives step by step as the player does the interaction, so while the final version of this page might look overwhelming in this post, the differences are actually very manageable as you play.  I hope. 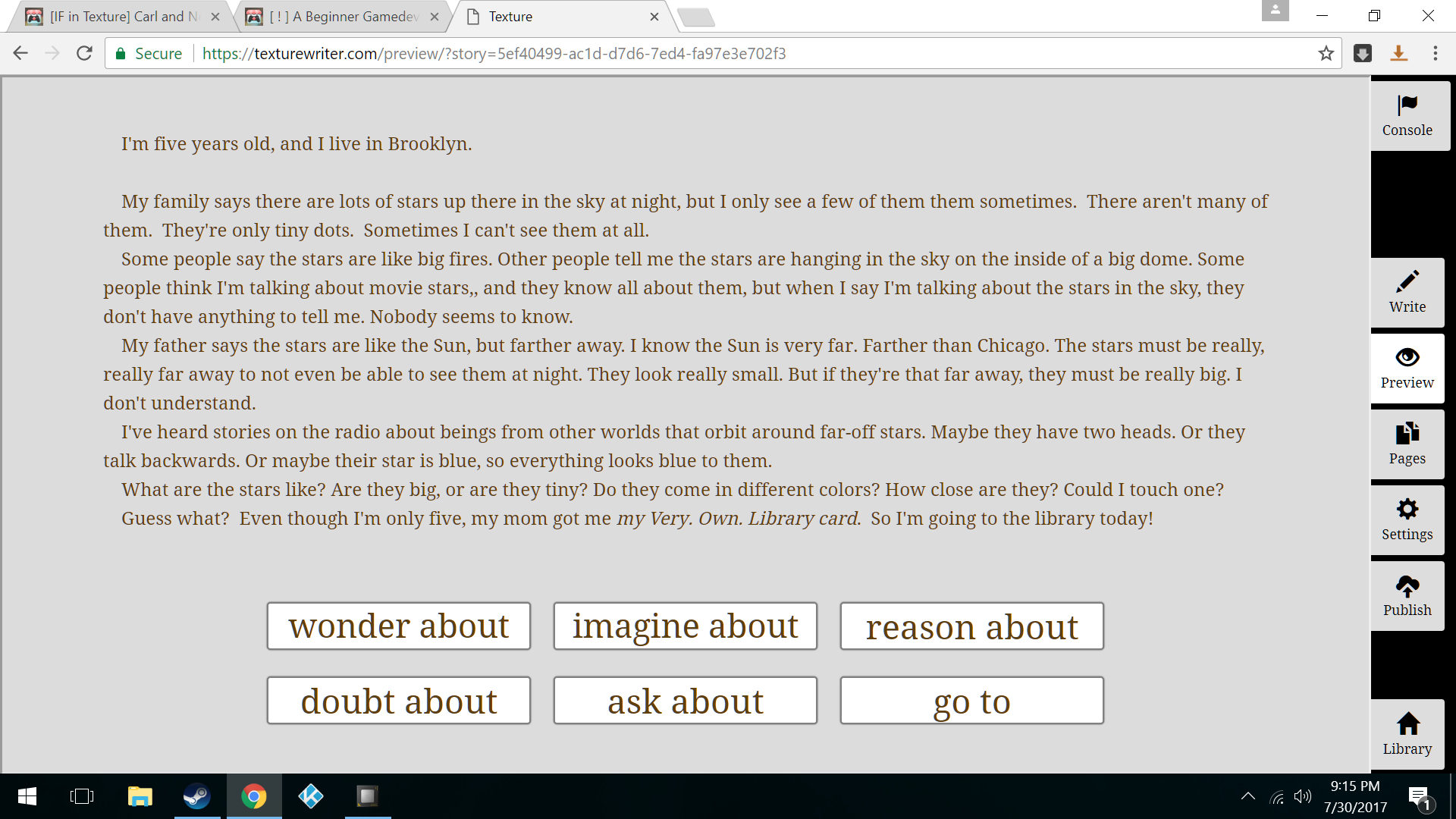 I started the jam today too.  Good luck, and congratulations on getting started and having something to show for it on day #1!

Hello everyone!  First post ever, first time developing a game in years and years, first time blogging about the experience.  It's a lot of firsts for me.

My game is called Carl and Neil Share a Dream.  It's a simple Interactive Fiction game that would have fit into the Fermi Paradox jam as well.   The player finds a  strange interstellar signal and tries to figure out its origins.

So I've been thinking about developing an Interactive Fiction for a really long time.  I loved playing IF when I was growing up and the genre was in its Infocom heyday.  What made it hard for me was the programming aspect.   Way long ago, I had programmed in 20th century languages like Pascal and BASIC, which was essentially a living nightmare for Interactive Fiction type gaming.  Inform 7 tried to make it easier with a natural language syntax, but in the end, it was still like learning a new language.  I think Inform actually made things worse because it was so much like English that it was hard not to let English constructions take hold of my programming.  So I ended up with syntax errors that were gramatically correct to my writing eyes.  Ugh.

But: web-based graphical development engines make it a lot easier.  Just find the interesting bit in your text, make a link, and point it in the right direction.  Codeless.  Awesome.  All about the storytelling.

Texture is my game engine because it makes it simple to highlight the player's options.  No guessing the verb and endessly combining inventory items here.   It was a toss-up between Texture and Twine.  I decided Texture's drag-and-drop verbs provide enough clues to move the player along and allow for just enough flexability without overwhelming me with options.  The way the engine replaces in-body text feels dreamlike to me, too.  I want the player to explore a story, make a few choices, and get some thought-provoking feedback.

I came onto Itch.io a few weeks ago looking for a new source of inspired video games.  One link led to another, and I soon found the game jams.  The Fermi Paradox themed jam really got my attention.  I love ideas about cosmology and human understandings of the universe.  I was inspired to start writing something of my own.  Then I found this jam, and now I'm committing myself to it.