Yes, for now, it is just that. If you have the inventory open next to your island, you can see it. But I will also make it visually more clear in the next version.

With every time you ascend, you will get one extra item for each destroyed item on the island. In the future I will include more rewards for ascending, like new bioms and more.

Aaaaw, thank you so much 😍 I like your game also a lot and I really loved seeing Mark playing it on stream today 😃

Thank you very much 😊

Thanks a lot for your feedback 😊 You can craft the new axe in the craft window if you scroll a bit down. After that you can get to the new biom.

Thank you 😊 Yes, in a future version I will make it more clear what the single items are doing 😊

Yeah, I sadly had not enough time to balance the game well 😅 But I'm really happy to hear you liked it visually 😊

I will do this in a future update of the game. I just didn't had time to put this in the game during the game jam 😅

The crafting part, where you join together different elements to get more powerful items.

I haven't planned to work on this game again since I already have too many other projects. If I decide to push out an update I will include different guns/weapons and probably also melee.

Thanks a lot for your feedback! At the moment I'm working on a completely new Poker Tower Defense for PC on Steam. The game will be more challenging and will have much more features (like 8 different special towers with a special ability). I will let you know, as soon as you can wishlist it on steam 😃

Hello Scisnien 👋 Thanks a lot for your feedback! Yes, you're right, it should be faster to get to the higher cupcakes.  I developed this game in around 2 days for a game jam and I think it's hard to balance an idle clicker in a good way in that short time.  But  I will start working on an update in the next few weeks, put more stuff in there and make it faster! And I want to release the game for mobile.

Thank you very much, for playing my game =D I also liked the video you made for my last kenney jam game =D

Currently I don't have this option in the game, sorry. As soon as I push out an update, I will also include the option to mute the sounds. Now you can mute the tab in your browser.

I googled a lot, and now I'm just confused, and don't understand why it works for you 😅I also tested the game in different browsers. Sometimes it saves and sometimes nothing gets saved. So I really don't recommend using serialization in WebGL. I rewrote the loading and saving to PlayerPrefs and after the rating time ended, i will update the game. Thanks for your feedback and help!

What browser are you using? I'm happy that it works for you 😃 I will check, what other browsers are working. With Chrome it does not work for me.

This time I used serialization for saving the data, but in the past game jams I always used playerprefs. This time serialization was easier, because I save arrays of BigIntegers. So yes, you can use serialization with webGL, but it seems, that it is a bit buggy.

Thank you very much for this great feedback 😍

Awwww, thank you very much for this awesome comment 😍

First: I'm really sorry, that the saving is not working, like it should! I will fix this.

Second: I think I will publish this game also for Android and iOS 😊 Especially when there is such great feedback! Right now I'm also working on an other idle clicker game. If you want you can follow me on Facebook, Twitter or Instagram to get to know, when I'm releasing my next game and when I'm releasing this game for mobile 😊

Thank you very much for your feedback =) Yes, while I developed this i thought a lot of Dungeon Keeper =)

A very lovely game. I have also used the spam yarn strategy and I used it also to bully the cats and the fish to the desired direction. Fortunately, the yarn is mightier than the barking!

Keep up the good work =)

Yeah, via itch.io you can't really play the game on your mobile phone. Unfortunately I can't change that myself, because it's the website. But in the next weeks I will release the game first for Android and then for iOS.

Thank you very much for your feedback! I will change the Gold Tower until the next update. I really like the idea of passive income!

And the idea with the Sniper Tower is also great! But I don't know yet if and when I will implement it.  Maybe I will adjust one of the existing towers to a sniper tower.

Hello everyone, here is Belinda, the developer of a new tower defense 👋😊

Today I have released the first prototype of my new Tower Defense: 👉👉👉 StampFense 👈👈👈

StampFense is a stamp tower defense game, where you defeat the enemies by building towers as well as stamping them in the ground with your powerful clicks!

I would love it, if you try the game out and would be very happy if you leave some feedback! 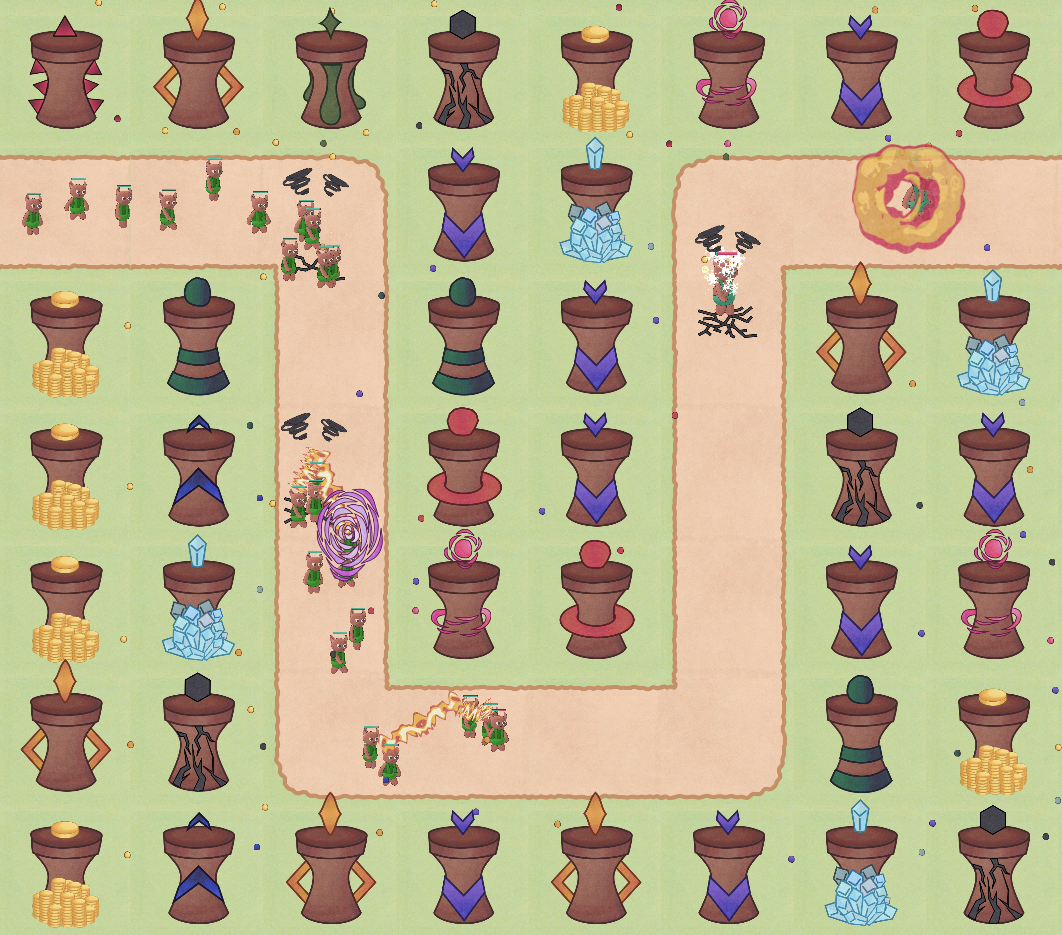 Have you found any bugs in the game? Please let me know, so I can hunt and destroy them 😇

Thank you very much for playing my game 😍

Thank you very much for playing my game 😍

I would love it, if you also try out my game =) https://belindatesigames.itch.io/dont-touch-my-food-td

I would love it, if you also try out my game =) https://belindatesigames.itch.io/dont-touch-my-food-td

Thank you for your feedback =) I have the art assets from craftpix.net and they were inspired by kingdom rush.

Thank you very much for your feedback =) When I release an update for the game, i will include a pause, when you are watching the tutorial. And yes, it was meant to feel a bit like a clicker game, too =)

Thank you for mentioning ‘Villainous’. I haven't known this game, but i tried it now and like it. I think i can get a lot of inspiration from this game =)

Yes, i was in the end-run a bit to lazy to put in the option for turning off the music XD When I update the game, I will put this in.

The game is indeed inspired by some Warcraft 3 maps =) I have always really loved the maps, where you can send enemies to your opponent.

Thank you very much for your feedback! I'm glad you liked it =)