Not a problem! It's happened to me too, which is why I knew what to do.

Hope you enjoy the book!

I double-checked the files just now, and they should be correct. Would you check your settings in the PDF viewer (or browser) you're using? It sounds like you have the Page View set to "Two pages" instead of "Single page," which would explain what you're seeing. 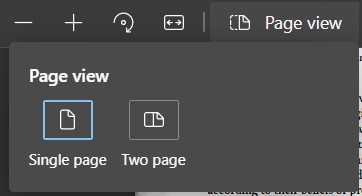 Please let us know if this resolves the issue!

Bumping my question from earlier

Are these for personal projects only? Or may they be used in commercial products as well?

Devlog posted! Stat blocks are ready to use

For sure! I'll post a devlog after we pull one together

Awesome ideas, posters, and great layout. John Tick is hilarious, but It's Me or the Minis is definitely inspired. I like that you can use the actual home/space for the game - and you not only play as minis but you can play with them! I'll be that metal mini.

Awesome ideas, posters, and great layout. John Tick is hilarious, but It's Me or the Minis is definitely inspired. I like that you can use the actual home/space for the game - and you not only play as minis but you can play with them! I'll be that metal mini.

Special shout out to Groovy Dad Games' double feature: "John Tick" and "It's Me or the Minis." I like that both games are one-page rpgs. And I like that both have miniature themes. Also, check out the awesome poster art.

Also, a second special shout out to Chubby Crow Games' Diapers and Quests (a Lasers & Feelings hack). I have never wanted to play a rugrats-style ttrpg so much.!

I'm so glad to see all the submissions so far for the game jam, and I've slowly started downloading, reading, rating, and responding to them! I look forward to getting to your submission(s) next, if I haven't already.

While we're at it, I was hoping some of y'all would be willing to engage by sharing which other game submissions you really appreciated! If you can, share a link and why you love it. And don't forget to rate and/or review it too.

You may find that if you give a shout out, someone might return the favor!

This is the Rugrats ttrpg we all knew we needed... Genuinely, it looks great! And I would totally play this with friends.

Also, I like that it's both mini in length and theme.

Genuinely cool idea for a game! Love it, and I love the document design too.

Love it. Rock Paper Scissors for combat resolution should be at every table!

Cool idea and love the reference. The Fates intervene!

This looks awesome! I love that incorporates Wordle (and the title is great too).  Truly cozy. I'm looking forward to giving a try!

This is great! I like that it can be used for Wanderhome or even outside of that context too.

Nice! I'll check that out when it's posted!

Business card ttrpgs are a true art. Also, love the name for PCs

I backed the game on Kickstarter, and Universal Ball Anthology definitely delivered. I loved the wacky writing, gameplay, and illustrations. Looking forward to their next one!

Miniature: What does that mean?

The game should be miniature either in length (1-2 pages: a brochure/tri-fold, a business card game, etc.) or in theme, like a Honey-I-Shrunk-The-Kids situation. Or maybe A Bug's Life. I don't know. It's up to you! 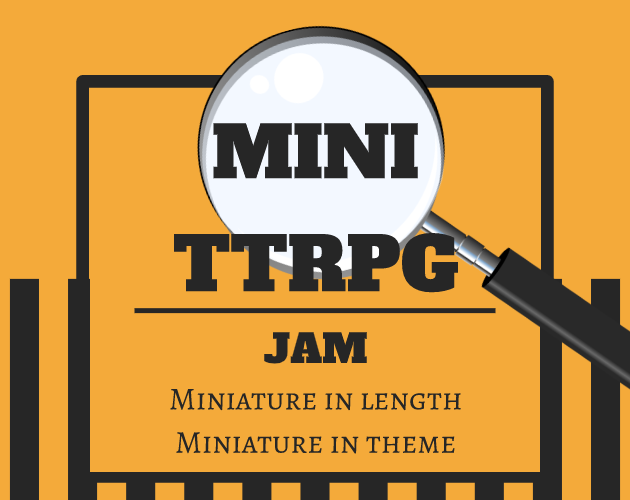 SHIVERS is so lite, it fits into a brochure. You can  learn the system in minutes, and build your own game in hours.

Use the free SHIVERS template, no special software needed. Adapt or include ideas from our Appendix of Optional Rules and Items.

To use, just credit SHIVERSATILITY by Backwater Games, provide our twitter handle @backwaterttrpg, and include a link to our itch.io page. 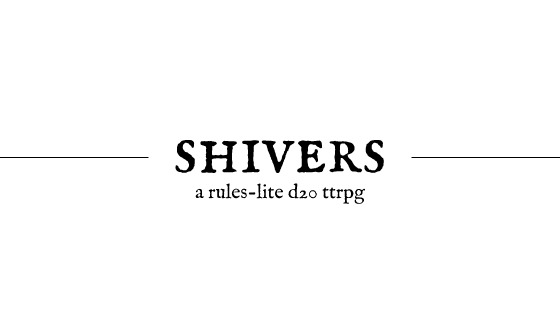 It uses an intuitive d20 system, fits various settings and genres, and prints easily as a brochure.

You can learn the system in minutes, build your own game or setting in hours, and you can create/sell your products for free.

Its form-fillable character sheet is designed to be visible on a mobile device or a one-sided sheet of paper.

Create your own SHIVERS

Add to the shiververse. Create your own game in minutes using the SHIVERS system and template.

We have three of our own SHIVERS that you can access for free:

All of the above are 2-pages as a printable brochure. 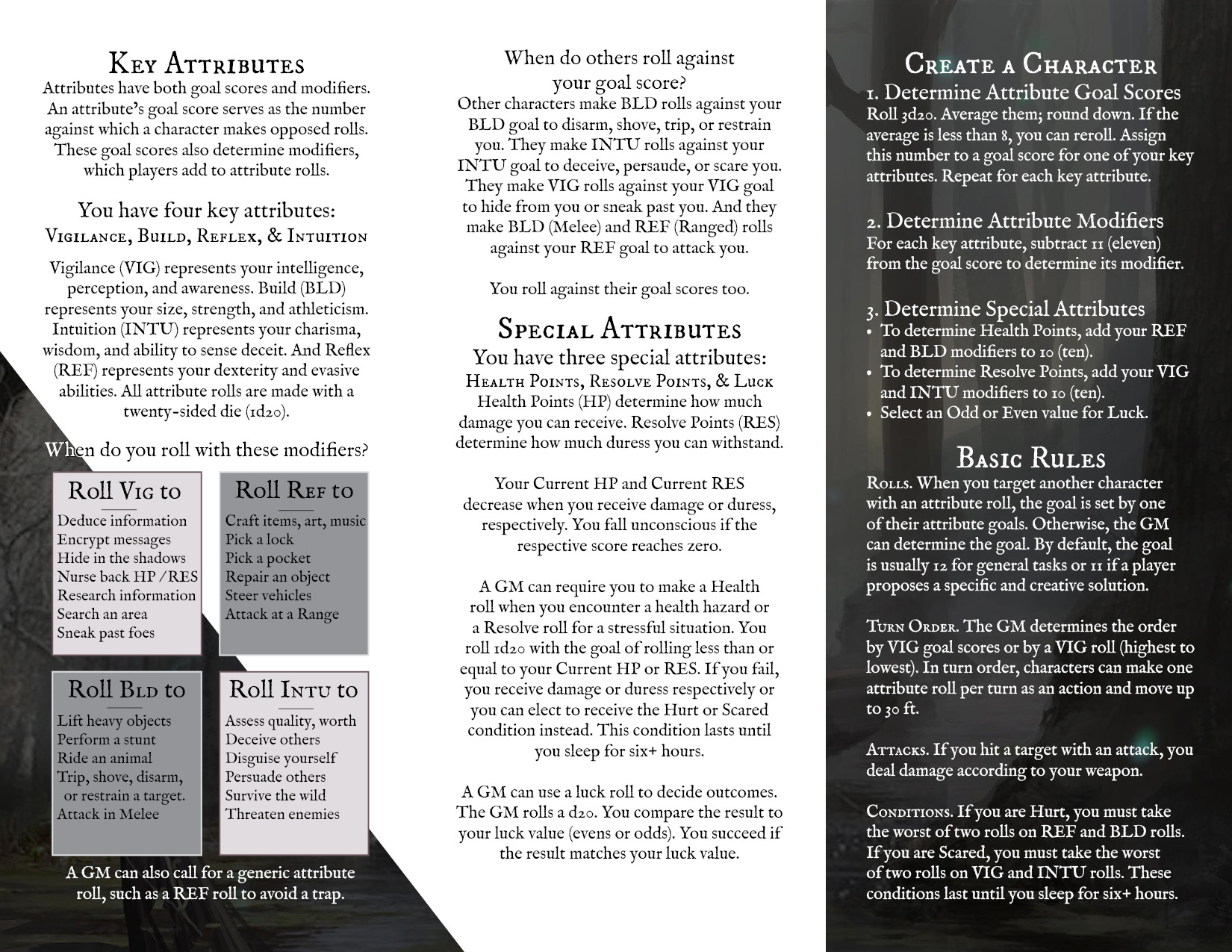 inside page of shivers 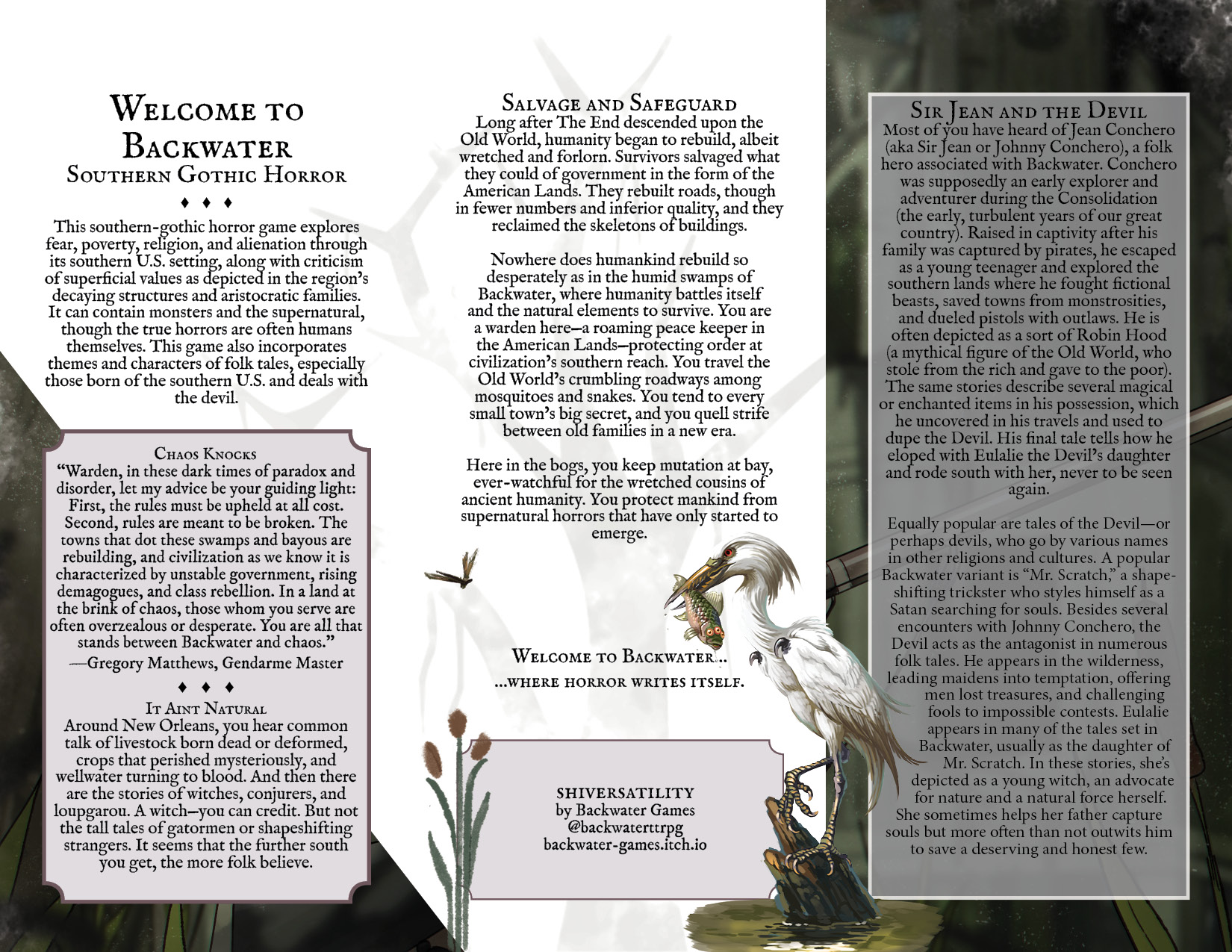 We're excited to finally bring Backwater to the itch community. Originally funded on Kickstarter, Backwater is a tabletop roleplaying game in the genre of southern gothic and style of survival horror.  It's set in post-apocalyptic Louisiana, Mississippi, and southern Arkansas. And we're beginning with a massive holiday sale, which will contribute to our next project.

Long after The End descended upon the Old World...

Humanity started to rebuild itself, albeit wretched and forlorn. Survivors salvaged what they could of government in the form of the American Lands. They rebuilt roads, though in fewer numbers and inferior quality, and they reclaimed the skeletons of buildings. Nowhere does humankind rebuild so desperately as in the humid swamps of the Backwater, where humanity battles itself and the natural elements to survive.

You are a warden here—a roaming peace keeper in the American Lands—protecting order at civilization’s southern reach. You travel the Old World’s crumbling roadways among mosquitoes and snakes. You tend to every small town’s big secret, and you quell strife between old families in a new era. Here in the bogs, you keep mutation at bay, ever-watchful for the wretched cousins of ancient humanity. You protect mankind from supernatural horrors that have only started to emerge.

Welcome to Backwater... where horror writes itself.

Backwater's southern gothic genre explores social issues relating to fear, poverty, religion, and alienation through its southern U.S. setting. Prominent among the genre's themes is a conscious criticism of superficial values and regional or familial history, depicted through the region's decaying structures and aristocratic families. It can contain monsters and the supernatural, though the true horrors are often humans themselves. Backwater is set in a post-apocalyptic future with a tenuous social order, and it reimagines the genre as a reflection on issues in not only American history but also our present world. Players take on the roles of either wardens or adventurers, who try to keep chaos and monstrosities at bay while uncovering secrets of bygone eras. They wander the Backwater ward, a region around modern-day Louisiana, Mississippi, and southern Arkansas, where centuries of technological know-how have been lost and where supernatural and magical forces are beginning to surface.

What do we offer?

You can also purchase our Core Rulebook hardcover through Shopify. US only.