Viewing post in Resonance Of The Soul: Fragments Of The Past comments

thank you, we need feedback so if you could that would be awesome!

The game looks nice and has some nice mechanics.

However I am 1 hour into the game and had 1 fight where I one shot a monster so far...

So the balance beetween talking and action is very off.

I also never did run into any encounter or noticed any to trigger.

when reaching the first vilage or town not sure, where you need to do 5 guild quest.

I did pick the revenge of the chicken one, it says follow the footprints but there are none.

All maps yu have acces too don´t have any fight or any footprints is that a bug?

And yes I used the sense thingie abilitiy but no luck with that.

And all other maps on the world map do not let you enter...

I back tracked and went back and forth to the maps I got access too and nothing.

If it´s a bug need to fix it , if not then it´s very unclear to the player what to do or more like where it is.

I think the game has potential but it´s not there yet to be really playable or enjoyable in terms of gameplay.

Atm most things are just auto run text, text and more text and no action or exploration.

I also was kinda sad about the fact that you can no really walk on the worldmap or the town.

They just images or small box rooms, it´s just my personal taste but it feels like you wanted to avoid making more maps for it x,D

Oh, regarding the balance, thank you i will fix later on, i don't want the game to be difficult in this stage haha xD

also you must use the Spatial Sense, just like on the first tutorial where you must find a mushroom to see the footprints, it's marked red for the first few footsteps! i will attach the image here just in case: 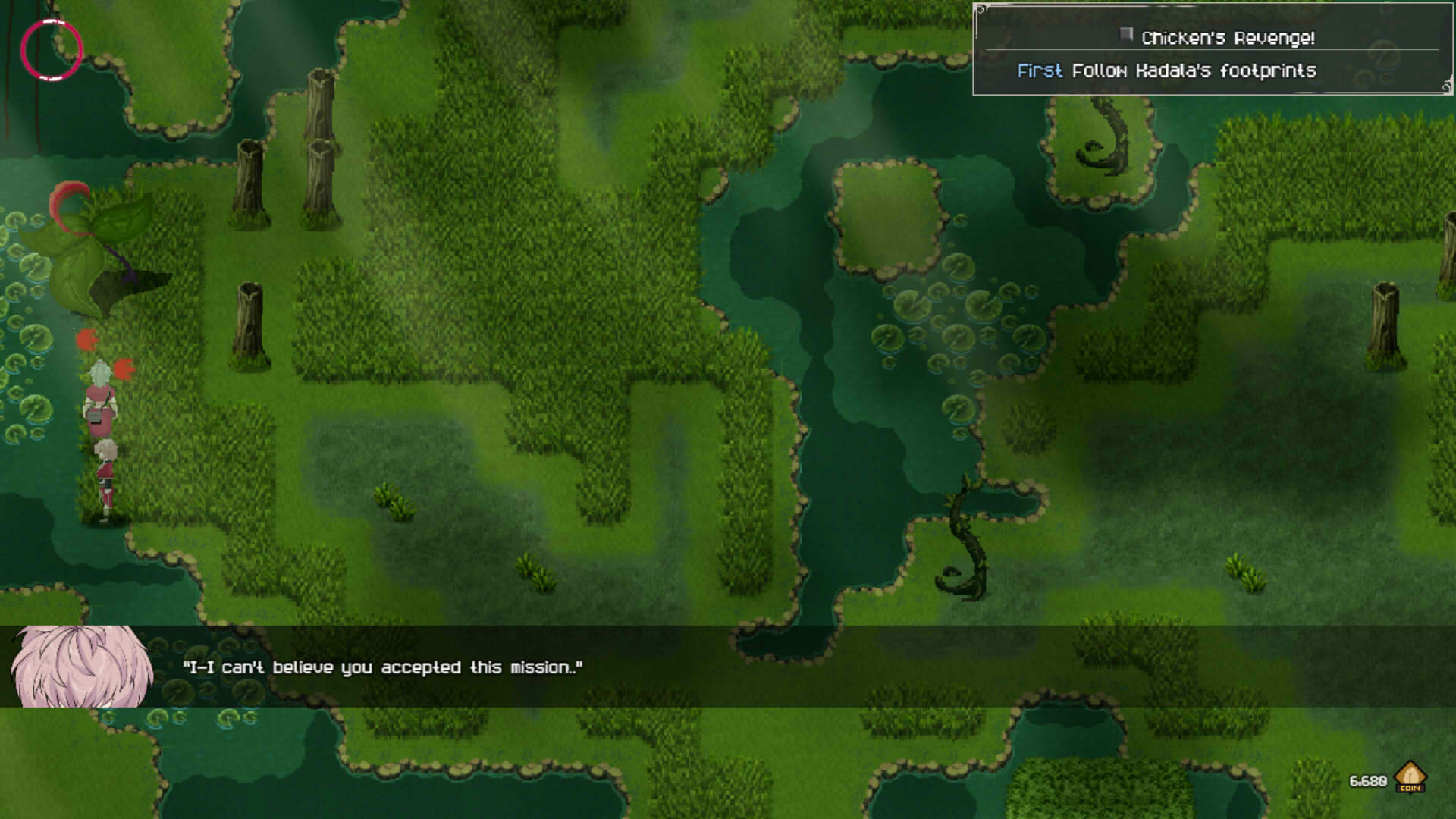 As for the encounter, you can see them when picking the replayable quest, and using the spatial sense to spot them :D

And you can walk around on replayable quest, it's beside the Guild Contract quests. I will make it easier to spot by giving them name in the next update :D

As for the village, yeah it's design choice since I'm the only one who handle most stuffs here, so I don't want open map when i cant optimize it to feel good exploring, so I opted for separate regions per quest :D

Thank you for the feedbacks, it helps me a lot preparing for the next update!

No worries and you welcome (=

Yeah getting balance and also finding things to progress right is tricky.

Since we as developers in our own games know anything and think it is all easy.

But blind players are always fools and don´t find things that for us would be obvious since we made them.

Good luck with your game <3

that's what i'm most needed! since obvious things are obvious for dev, so feedback from players are the most essential for me right now.

And thank you,  I will check your game after i'm done with the festival, maybe I'll learn things for my game :D

Ow thank you, but I don´t think you will learn that much haha =o

But I am also just a noob dev and this is my first game.

Sadly I am also solo on the project and my pc giving me problems but I try.

Also I did continue the game today and feel kinda anyoed I not saw the red arrow point up in the guild hall map it appeard just after fiishing talking to the messenger I guess.

And since I couldnt move up before I did not try to go there againand instead went outside of the guild thinking I need to go on the world map and travel somewhere.

Instead you made it so that all guild quests are in the guildhall itself and you get teleported to that map? Weird but I guess thats how it is and that confused me since I thought you need to leave the guildhall the way you came x,D So since that is not a problem anymore I went and continued the game, did the chicken fishing and wrait quest... and then it happends... boom encounter of 3 enemies and then endless confuse spamed me to death and the other charackter is auto fight it seems so couldnt do anything. x,D rip

The battle system it self is nice and not the problem.

Just need to be careful with the balance and not perma lock down your players.

Enemies who can spam sleep, stun, confuse and other strong debuffs are dangerous.

They can break your game specially if the player can only controle 1 charackter and the rest are auto battle.

So if the playable charackter is perma locked by one or more of those strong status effects.

They player is rendered helpless for eternity until there HP drops to 0.

Aside from that I enjoy the game and tryed to avoid that op enemy groubs...