Submitted by VECTOR3Studio (@studiovector3) — 1 hour, 42 minutes before the deadline
Add to collection 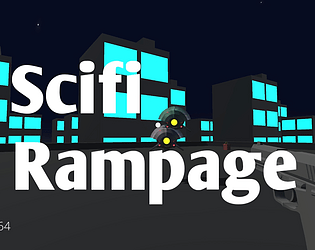 I like the implementation of the gift boxes with the health boxes.

I have no problems with the movement, although sometimes the character can get stuck on the edges of the map.

The gun change I feel is not really an upgrade but the feature of having an upgraded weapon is nice.

Good fun little shooter! I think you've gone for the perfect approach, it's a small game but everything in it works perfectly. It could stand to have a score or a timer or something to kind of mark the player experience, and I would probably recommend either having enemies do more damage or having presents drop less frequently as it's very easy to keep at 100 health. Great work!

This game doesn't have a Linux or Mac version, but has it specified. Maybe it was specified by mistake?

I didn't test it on linux or Mac because I haven't. But when you build a game in unity is showing you can play it  it on Windows Linux and Mac.

It's easy to miss in Unity, but in the Build Settings window you have to change the "Target Platform" and build each executable separately.

The music is nice and feels both a bit sci fi and a bit christmas-y and its nice to see that some thought was put on balancing, faster gun lower damage etc, would have been nice with more different guns and changing them more often.

That's a nice game we have there :)

The BGM is relaxing, a bit repetitive but it doesn't harm the game. The different sounds for the weapons are cool, it misses sounds for the enemies though.

Overall, the gameplay has potential, it just needs more polishing

I had fun while playing it, but rapidly became bored, so that's a mid yes for me :D

Some gifts appear out of bounds, and are unreachable >:(

If you press escape, the mouse appears, but it does nothing special.

Huge thanks for perfect review 😉

Fun to play! I liked playing a scifi game after playing many other non scifi games today :D

It has a potential, but I get more HP than I loose its incredibly easy, make more guns and more enemiesand make hp locked at max 100

I simple game but that's all it needs. I feel like there could have been more unpredictable rewards to the presents so that its more risky. I do wish there was more variation to the level design too. Overall has potential. Also bit confused why "Present" is the theme of this game when the theme is actually "Surprise" but that doesn't harm the experience really. Good Job.

Please check out my game for this jam if you have time.