A simplistic isometric platformer
Submitted by Dimensional Space — 2 days, 7 hours before the deadline
Add to collection 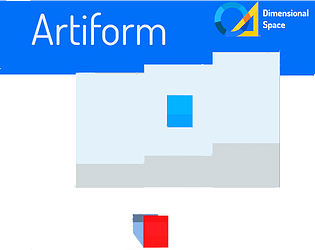 Music Source
I made it myself

Nice puzzles, sometimes it's hard to determine your vertical position

A game with a lot of potential

Thanks for playing and for your feedback! I ‘ll fix these in the next update.

Tried the game. Liked the idea of having a isometric and minimalistic puzzle game, but unfortunately the visuals needs work, it’s very hard to see what to do. The music is good, the AI is quite intelligent, which I liked and the puzzles were well done. This is a good entry overall and I liked that. Congratulations for your hard work!

Thank you for your feedback! I have fixed most of the issues said in the comments and this game will be updated soon.

Cool little idea, unfortunately the game was quite hard to play! The isometric visuals make things confusing and along with unconsistent colors of the various elements (bridges, closed/open doors…) they mean I often advanced by trial-and-error, which felt a little underwhelming. Also, not having a real tutorial can be a little frustrating when you have to understand how things work by yourself, especially in the last levels.

The controls are nice and responsive but again the isometric visuals make hard to understand the distance between elements, especially on the vertical axis. I will say that I love the idea of the Ai as a second character to control, and if expanded upon it can truly make for a bunch of amazing puzzles: it seemed to me that it operated with some sort of A* pathfinding algoiritm, so it would be cool if you had to create obstacles in the shortest path to a point to make the Ai take a longer one (which could contain, for example, a button you need to press). This idea has so much potential!

The last thing I’ll say is that I’ve encountered a little bug: if you click “Reset” at the end of a level it isn’t registred that you have beaten the level, so the next one doesn’t unlock in the level select menu; I would have removed the Reset button completely, as most people won’t replay a level they have just completed.

Again, the game is a bit of a raw gem right now, but if improved it can really shine! Keep it up! ^-^

Thanks for your feedback ! I have fixed most of the issues mentioned here and will update the game in September.

Cool game. Was a bit confused with the first level but once I solved it, the other levels were much clearer for me!

fits the theme well, but I sometimes found it hard to orient myself.

The Ai companion was a good addition to work with the theme. Using a simple geometric art style can save a lot of time, but it only really works if it's consistent. If you simplify the menus, and shadows, and removed the transparency from some of the objects, the art style would've been a LOT better!

The levels were quick and I had to think to beat them so that was also good. Something that would've made the gameplay feel better is if there were tutorials in the actual levels. Putting them outside in the main menu is fine but games feel more cohesive when you don't need to leave them to learn how to play!

Thanks for your feedback and for playing! I may have to use this comment as a guide for my update and future games. Thanks!

To be honest I'm left a little confused. The combination of weirdcamera view and weirder visuals made the game hard to orientate. For instance, there are fall pits colored in blue and green which you can fall into, however the game doesn't restert automatically and if you hold up you can see the "shadow" of you on the screen (you can even move it past the pit). I get the game is 3D but the top of some cubes blend with the background and what you are left with is some greyish shape you don't know how to interact with. This blending also huts the perception of height and therefore levels who relly on height mechanics are extra confusing. With that said I enjoyed the game. The music is very nice and controlls are easy to understand. I like how accessible the game is and in general I had fun during my confussion.

Thanks for your feedback! The issues have been fixed and for them green bridge that is a yellow bridge in front of a blue background.

Nice game, I enjoyed the companion which perfectly fits the theme :)
But as lot of people mentioned, camera is a little problem and makes the level unclear, the same with 45° camera would have been so much more enjoyable, otherwise I can see that the game and level design was well thought to have a logic progression for the player

Thanks for your feedback and for playing! The camera has been fixed and will be shown in the next update.

Nice idea for the theme, but the game needs more polish. One more thing is that it's really hard to understand what to do at times. Also, the heights of the blocks, as SkyLike said, are pretty unclear at times. Good game though!

Thanks for your feedback! and as I said the camera, boarders and physics are fixed. There will be an update in September.

Idea is very cool. The game is very, very confusing. I actually wanted to give some more feedback, but SkyLike alreay wrote everything i wanted to write..

Thanks for playing! Just to let you know everything is fixed and there will be an update next month!

Interesting idea. I also like the effort you put into the user interface.  There are a few issues with the camera and physics that can be improved. But you already know this. A good project overall, keep it up :)

The idea is quite interesting, but there are few things that could be improved.

- It is not so easy to see the height of an object like in the first tutorial level, where you had to build stairs.

- If you jump and walk at the same time against the wall you get stuck. ( There is an easy fix, apply an 2D Physics material with 0 friction).

- The player can move out of the camera.

Thanks for your feedback! The camera and boundary issues are resolved and I will upload these fixes in September.

Very fun game! I wish the visuals were a bit more clear. For example, I didn't know green meant fall down pit XD Also levels 6, 10, and 11 can all be cheesed by jumping and hitting the end goal.  On one of the first levels, the door doesn't change from green to yellow. It may be better for the doors to just straight up disappear when you hit the button for it, that would be more clear to players that it's gone.  Also, the player can move off-screen so definitely add boundaries.  Overall, really fun game that just needs a visual overhaul :)

Thanks for playing and for your feedback! I fixed the camera and boundary issues and will be working on the others.

Camera is you enemy in this game.

Also some things became confusing because of same colors can be on different objects.Also sometimes you cant see where even you are.Physics is bad - cant even jump properly.

I like idea of companion and how you was trying to add it to gameplay, the best of this game.

If you want to do isometric camera try different angle(you can see examples in old games,like rattle and roll,etc).I played few levels,and then stopped.Kudos who can beat them all!

I have fixed the issues mentioned here and you can experience these fixes in the next update. Thanks for playing!

Hope You enjoyed it!

Interesting puzzles, the last one took me some time because things had to be done offscreen

I really liked the game and the mechanics but  just the camera that is bad...

Thanks for your feedback and thanks for playing! I have fixed the issue and I will post the update next month.

I really liked this, but just the camera that is bad as everyone stated.

But I liked the visuals and sounds! :D

Thanks for your feedback! I resolved it to a better angle so when I update the game there will be two camera options.

As others have said the camera made this difficult to play! but overall good stuff :)

Thanks for playing! I guess my first priorities is to fix the camera angle and slippy movement.

What do you think about this angle?