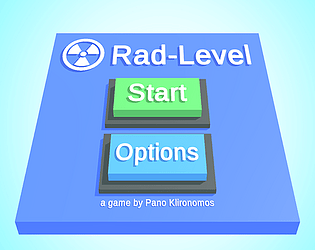 I really like this. I am sucker for a rather stylish-game using minimal graphics effectively, by combining it with great effects! It hits a great spot of being clear, but without feeling stiff. The button animations, the lights, the pulsating radioactive core and the really awesome table-flip transition. Have always felt that the power is in the details, and your game is spot-on!

For a jam-game, this is a great production, with only a few smaller issues I found. That said, if you look beyond that there is some space for improvements/development. As Vanne already mentioned, the little switches where a bit difficult to handle compared to the rest. It also broke the input pattern, forcing me to "hold-and-drag" rather then just clicking, something I would not see as much of a issue if the game was longer with even more control types, but with only 3 button-types the input difference stands-out and makes it less elegant. You also had controls for turning/zooming, something that I feel is completely unnecessary in this version of the game. That said, if you continue developing it, I would love to see more complex boards where turning the camera or even zooming becomes a necessity.

When it comes to level design, you also did the right choice. Have a level to introduce the new button type, followed by a more complex level using that type, and later finish the game with a "extra-hard" level with a more demanding radiation-level. I feel you hit a good sweet-spot on the amount of time it takes to clear a level and the total time it takes to clear it for a jam-game. It never overstayed its welcome.

I think you already have a decent grip what could be added, but if there is one thing that I would love to see explored is the use of the board itself. For example: being able to rotate the entire board and have buttons in odd locations. I'm thinking of the game "Keep talking and nobody explodes" as a great example of this.

Thank you so much for all the feedback! I’m glad you enjoyed it. I definitely would have added much more than the buttons, switches, and sliders, and implemented the turn and zoom mechanic as more of a feature if i had more time; The game that I uploaded was a lot less finished than what I had originally envisioned, I had so much homework that week that it was hard to find enough time.

Was fun to play! Still very impressive production, especially if you had other commitments during the week. Best of luck on your next game! Will definitely keep a eye out.

Cool little game. The drag switches were a little hard to get a grab on, otherwise I really liked the mechanics. I got to Insanium and it crashed for me while playing.