A relaxing puzzle game with donuts.
Submitted by little pug games — 2 days, 45 minutes before the deadline
Add to collection 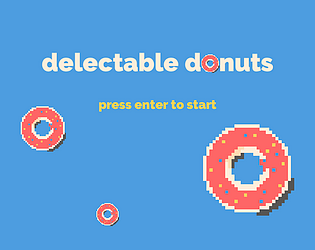 I liked the idea of the game, it was a good use of the theme. I like how the player gets bigger because of all the bad dietery decisions!

For what it was, a ok puzzle game.

The visuals where good, liked that you limited yourself to using very few colors, really helps to create a good visual "style" and even some music that works, if a bit repetitive. I must admit however I felt that the game is a bit uninspired overall. This game-concept is nothing new, and while that's diffidently not necessary for a jam, the levels themselves where just not that interesting and was nothing had not played before. That said, that does not detract that its a good well-functioning game, with a surprising amount of levels for a jam! So great work on that part, I just wish there was something more to it.

Secondly I really do not see the theme represented that well in the game. I read your description that its basically a social commentary about diet? Nothing against that, but its just not shown that well here. The only connection to that within the game is that my character eats doughnuts, that are unhealthy, therefor my character gets larger as the level progress. That's all well and good, however it feels your missing the most important part there: the losing. At the moment there is no actual consequence for my characters eating, nothing in the gameplay itself or in the "story" being told shows that, I only have my own understanding that: being overweight == bad.
You really need something that represents that last part better, and if your able, preferably directly in the gameplay. Because as of now, if I had not read your game-description I might not have been able to guess what the commentary was about.

Also, just a side note: I do find the description being a bit ironic compared to the game play, as you wrote: "This game is my commentary on the issue. Eat well and exercise." But your character is doing an A LOT of running in the game :P

I liked your critique and comment. I'll keep them in mind for my next project.

LikeReply
Vespir The DevSubmitted2 years ago

The game was really fun and I can't say much about it. I like the idea behind it, it fits the theme; and was challenging. It gave me a slight Undertale vibe as well.

The music was really nice and chill, I gave a 4 for audio and would have given a 5 but there's no sound effects. And having game sound effects with the music would've been fantastic!

The visuals were simple and vibrant which matched the game in every aspect.

The gameplay was solid, I really enjoyed it and can't complain about it.

Submitted
My Demon Within
LikeReply