Collect the pixels to rediscover your classic self.
Submitted by pohko (@heyPohko) — 3 hours, 54 minutes before the deadline
Add to collection 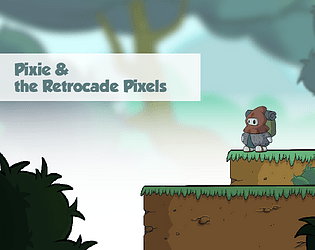 A well designed game. Looks like a lot of time was put into the unique style and gameplay. Recommended!

Oh my. I want to play this game with all the levels of retrocrade. So good.

Thanks Torri!  I would like to make a fuller hand drawn game :)

Cool rewind mechanic! But it would be better to use it for some problem solving rather than just collecting coins.

Something that could use some improvements is the game size, I mean, over 300 MB for a little game?

But I like that it went back to lower rez graphics. I really thought that there would be another level where the graphics would even go lower.

Thanks for playing!  Yeah, I ran into some issues with file size right before submission and wasn't able to shrink it in time, lots of assets.  I really appreciate the feedback

I love the game mechanics and the ability to rewind time! The only thing I didn't love so much was the music. Death metal would have been a better choice. The flutes make me tense, especially in the shoulders.

Nice out of the box concept. I was expecting everyone to just do a Megaman-Mario mashup, so this was refreshing to see. Gorgeous art, as always, and nice touch with the rewind mechanic. You should quit your job and do this full time.

Such an original idea! Art and style is beautiful. Love the mechanic nod to Braid. Excellent job!!

I think that the ideas are fun and original. Well done!

Really cool idea. Loved working through the game and using the rewind to navigate the levels.

this game was fun!! I loved the rewind mechanic! Cool work!